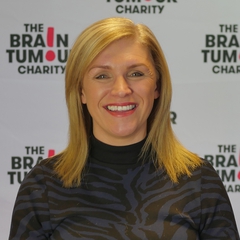 Shona joined The Charity in July 2017, following an extensive career in Banking of almost 19 years. She comes with varying skills which allow her to organise from the smallest of events to something much bigger.

Sadly, Shona lost her husband in May 2016, to an undiagnosed Astrocytoma brain tumour. Following this, she decided to go ahead and organise a charity event in his memory which was very successful and went on to raise substantial funds for the charity.

Since then, she has educated herself on the lack of awareness and money that goes towards the fight in finding a cure for brain tumours. Due to her passion, she has now turned this focus to doing what she can to help change this.

Living near to Edinburgh, Shona is located centrally in Scotland and is on hand to help support our fundraisers in the region alongside our other Community Fundraiser, Katie, in Scotland.