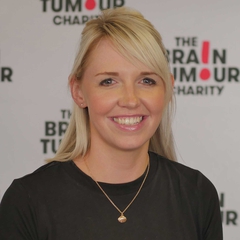 Kayleigh is currently on maternity leave.

Kayleigh joined The Charity in July 2019, having previously worked in both the Law and the Education Sector. Kayleigh wanted to give something back to the Charity who supported her, and her family, through a very difficult time.

Since losing her dad to a brain tumour in November 2015, Kayleigh has volunteered for The Charity, taking on tasks such as being a Christmas Card Angel each year, and providing enthusiasm and inspiration at the Twilight Walks. Having already met many of the wonderful supporters and employees of The Charity, she is thrilled to become a member of the Community Fundraising Team! She is as determined as The Charity, in the quest for finding a cure for such a cruel disease.

Based in the West Midlands, Kayleigh is on hand to provide advice, inspiration, motivation and ideas to the many supporter groups and fundraisers in her region, and to ensure that they feel supported on every step of their fundraising journey.