The importance of a positive attitude. A written and filmed account of Vicky’s experiences.

My name is Vicky, I’m 30 and I am mother to 4 lovely boys. Last May, I was at work, in a pre-school when just before home time I suffered a seizure. The next thing I remember was a paramedic in my face and a lot of concerned faces. I was taken to hospital and I was told I would be referred for a MRI scan and to see the doctor if I was to have another seizure, where medication would be started. It was assumed I may have developed epilepsy. At the end of May, I was staying with family. I went to bed, and the next thing I remember is paramedics again. I had suffered a seizure in my sleep, although my partner thought I was snoring, he luckily realised. Again I was taken to hospital, and then I was put onto medication. The whole thought of having epilepsy upset me, life wouldn’t be the same. I had my MRI, when three days later my consultant from the Royal Berkshire hospital rang and said a mass had been found and I must come in next week to discuss. This was now a whole different ball game, I was devastated and nervous.

On meeting the consultant he said a mass had been detected, but it wasn’t thought to be a malignant tumour as on a scan they show up dark. It was thought to be some sort of benign cyst or mass of some sort. He said I could watch and wait or have a biopsy, which obviously carried many risks, but I had to make the choice. He arranged for me to be seen by a surgeon from the John Radcliffe. This surgeon was the change in my life I needed, like a guardian angel. He was so positive and straight away said I was to have a biopsy, as the location was good, not in a too effectible area. He would also remove as much as he could at the same time. The date for the operation soon came and I went in. I was so nervous, tried to be brave as so many thoughts were going through my head, “what’s going to happen? Will I survive? What will happen to my children?”. The next day I was told my op wouldn’t go ahead as there was complications getting the scan images from the RBH and the scanner at the JR was broken. I was so upset, my children had been so brave and had prepared themselves for mummy not being there and staying with relatives. Obviously I understood the importance for the images needed.

The following week I went in again. This time I was first on the list. As I was being wheeled down to theatre, I finally cracked, and the positive attitude I had went out the window, I started to panic. I was shaking and crying but the theatre staff were amazing, they understood. I was still upset when I was in the anaesthetic room, but my surgeon came in and told me “don’t be upset, I’ll look after you, its fine”. With that I went to sleep. The next thing I knew there were bright lights and someone saying “it’s all fine, it’s all over now, you’re ok”. That feeling was one of the best in the world. The op had taken 4 hours and I looked pretty horrendous, like Frankenstein!

After 2 nights in hospital I went home, under instructions to take it easy, do nothing. That’s very difficult for me but oh how I wish I had listened. That night I suffered a seizure in the kitchen, with my 3 eldest boys with me. I remember their screams, then nothing. I woke to paramedics, again, and was taken to hospital. My mum came with me whilst my partner looked after the traumatised boys. I suffered a further seizure on the way to hospital and then again at the hospital. It was awful, and I always feel deflated and even a bit embarrassed after a seizure. A CT scan showed a little bleeding from the site of the operation but this is quite common. So life carried on and I went to get the results.

I was dealt the huge blow that I did in fact have a malignant type of tumour which was a slow growing, low grade so I supposed it could have been worse. Life at that point changed and for the week or so after I was in pieces, my partner was in pieces, the kids didn’t know what was going on, friends were ringing me crying – the only people to hold it together in front of me were my mum and dad.

In this video, Vicky explains her story, her treatment for her brain tumour and how positivity played a large role in her recovery.

Then all of a sudden, I clicked and I thought, no, I can let it beat me and I can get depressed about it or I can be positive and fight it all the way, life goes on and I have to enjoy my boys and keep life normal which is the way it should be. From that point on, the positive attitude has stuck. Positive things happen to positive people. I have a brilliant team at the JR looking after me, and they have told me life can go on and yes I can be “normal”. I have 6 monthly scans for 2 years then yearly. My first scan was stable, so no growth, and I have just had my next scan which is a year after the op and that too is stable no change. They say basically, if you have to have a tumour, the one I have is the best for prognosis, and that it’s just a ticking time bomb, at some point it will change, but there are so many options.

Amazing – if I do say so myself!

I did a little bit of running before this whole drama started but there was a running coach who I vaguely knew, Jo, at the boys’ school who is running mad and she asked if I was allowed to run again. The consultant said yes of course. I don’t know why, but I thought what can I do for myself, and with a bit of encouragement from Jo, I entered into the Reading Half Marathon. This way I could raise money for charity, stay fit and just prove to myself and show as many people as possible that brain tumours don’t have to ruin your life. Jo had been entering for personal running but said she too would run for the charity.

I trained with Jo and in April this year we ran the half marathon. It was an emotional time and showed what I have achieved after such a rough time. I finished it in 1 hour and 54 minutes! Amazing if I do say so myself! I was so proud and between me and Jo we raised nearly £4,000 for The Brain Tumour Charity. The whole experience was amazing, I actually enjoyed the run and I have found a friend for life in Jo. She has been amazing and has supported me throughout. The picture itself just shows the proudness, and is just a really happy photo.

My children throughout the whole ordeal have been amazing; I love them to pieces for their bravery throughout. They have kept me going with my positive attitude. They had so many questions and their lives turned upside down, but life is kept normal for them. There are times when I feel sad when I think about the uncertain future, but then again, I am so lucky that my tumour wasn’t worse, or the operation had gone wrong or even that I hadn’t been driving my car when I had suffered my first seizure.

Now life is good, I work, I run the house, and let the boys lives take mine over with football, swimming and play dates, I love it! The boys are about to embark on a little fundraising of their own by running in the local yearly 10K run. They are only 11 and 9, but enjoy training with me and want to raise money to make mummy and other people better. They are asking friends, families and businesses for help with this.

My message to people in this position is to stay positive, fight it, and enjoy life. I feel so strongly about the importance of a positive attitude and want to show others you can overcome this, life can get back to normal and just make the most of it. 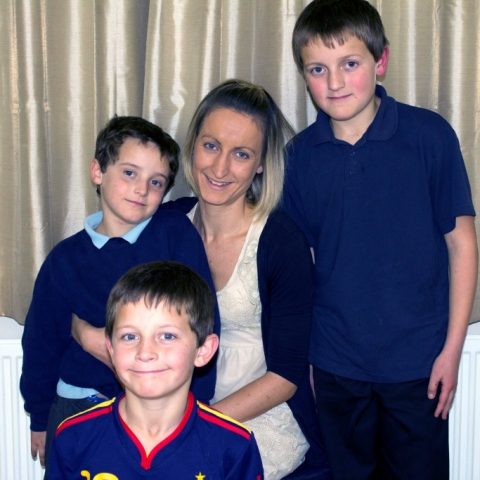 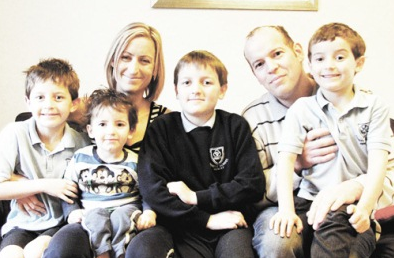 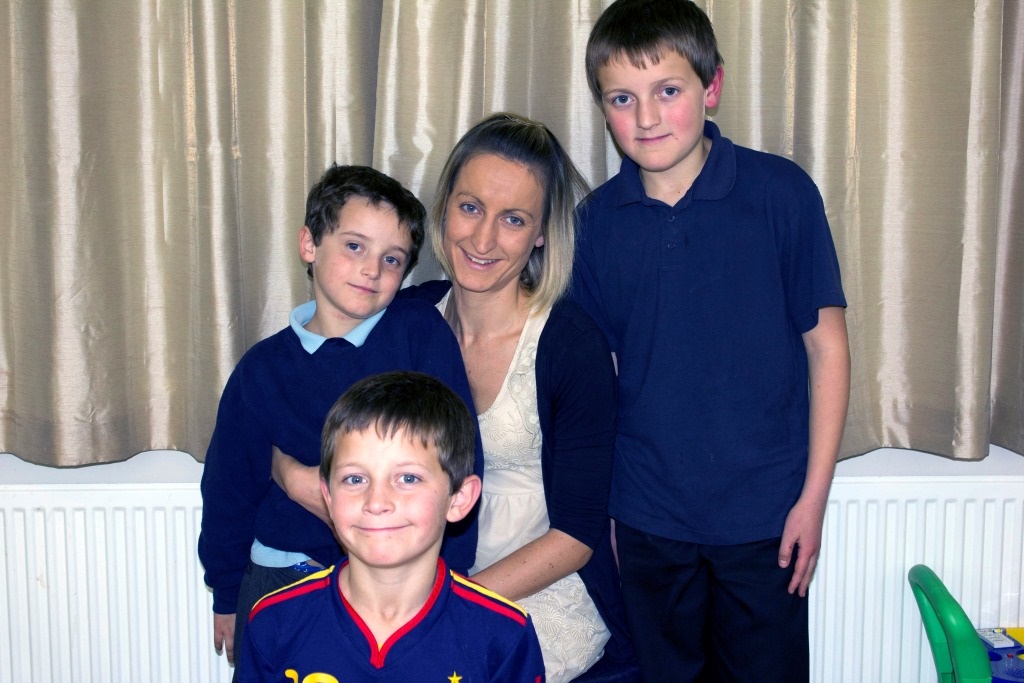