Box of Hugs becomes our most recent corporate partner

Anna (42), Sophie (40), and Lucy (43), all mums of young children, launched their Box of Hugs company back in 2017 and have seen it’s personalised gift products and customer base grow enormously.

They have worked alongside us for over a year and a half now, raising funds and exploring innovative ways to raise awareness for both the brand and The Charity’s work.

Now more than ever during the ongoing COVID pandemic, their gift boxes are even more in demand.

This has inspired the sisters to launch ‘A Little Box of Calm’ and to partner with The Brain Tumour Charity, a cause close to the family’s heart since their beloved mum Jane, was diagnosed with a meningioma brain tumour in 2011. This collaboration gift box is the next logical progression for the partnership.

Sophie Morris said: “It was in 2011 that we all had a call we would never forget, from our mum. She told us very matter of factly that she had a mass on her brain. She had had an unexpected seizure several weeks before at work which she put down to working too hard.

“She received such amazing care and despite a long road to recovery along the way, we have seen our mum go from strength to strength.

“Although she still has lasting side effects, she is busier and more active than most 70 year olds that we know!”

It was while their mum was recovering from surgery in hospital that the sisters pledge to raise as much awareness of brain tumours as they could, a pledge now realised as they’ve become a partner with The Brain Tumour Charity. 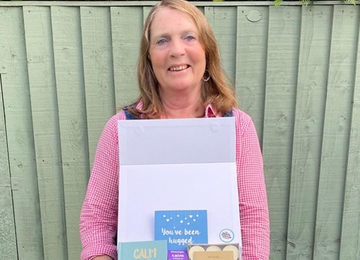 Sometimes it’s as hard for the family and those close to you as it is for yourself following a diagnosis - I think this is such a special gift for anyone going through a difficult time.

Lucy said: 'We are incredibly proud to be launching a new Box of Hugs in partnership with The Brain Tumour Charity.'

“We have been very fortunate to see our business (Box of Hugs London) grow over recent months and are excited to be able to use this platform to spread the word about this wonderful charity so close to our hearts and to raise vital funds so they can help more people like our mum.’

“A Little Box of Calm’ is such a beautiful gift that has been created with those going through a really tough time in mind. Not only is it packed full of thoughtful, calming goodies but it also includes the gift of a £5 donation to The Brain Tumour Charity.'

Buy your Box of Hugs

Motorsport community platform teams up with The Brain Tumour Charity

Sharing our work on a global stage