Jeff Smith, who was 66, and his wife Lesley from Wiltshire got back from a holiday of a lifetime just ahead of the Lockdown restrictions being introduced in March 2020. Jeff had what they originally thought was jet lag as he spent the first few days back in the UK feeling tired and with a high temperature but this soon progressed to hallucinations and being unsteady on his feet.

Their original flight back from Sydney had been cancelled due to the pandemic and the usually organised Jeff, who used to be the CEO of an international company, had uncharacteristically struggled to make the necessary changes to their flights and accommodation.

Jeff had the lung condition, Sarcoidosis, so they had thought maybe his early symptoms were due to inhaling the smoke from the Australian fires which were burning during their visit. He also had some headaches during the holiday but they hadn’t been debilitating and had been managed with paracetamol.

The pandemic meant that it was difficult for them to get medical help and advice as more symptoms presented themselves, although a test had ruled out Jeff having Covid. The GP sent Jeff to A&E at Salisbury Hospital for tests, which were inconclusive. He was blue-lighted to the specialist unit at Southampton General Hospital where he spent the next three weeks having more tests, including a CT scan, which revealed the mass on his brain, and a brain biopsy.

The restrictions in place due to the Covid pandemic meant that Lesley was unable to see Jeff for more than an hour each day at Salisbury Hospital and not at all once he had been transferred to Southampton. At the end of May, a few days after the brain biopsy, the mass was confirmed to be extensive Grade 4 Glioblastoma in both sides of his brain – and he was given just 12 weeks to live. In addition, surgery wasn’t possible as the tumour was in various locations across Jeff’s brain.

He was discharged and taken home with a Treatment Escalation Plan, which set out how Jeff should be cared for under a range of circumstances. He had radiotherapy for two weeks at the beginning of July. Even though it had a very slim chance of success, they were optimistic that it might at least slow down the spread of the mass. Sadly, it wasn’t’ successful and Jeff’s rapid deterioration continued.

In June, Jeff began having carers visit three times during the day but Lesley had to dedicate much of her time to caring for him as he became immobile, incontinent and he needed help to wash and dress. Their two sons, Tim and David, did not live locally but visited to help and support when they could around the Covid restrictions. The stress Lesley was under was quite clearly starting to show so their eldest son moved from London to support her.

Lesley said: “Jeff was obviously very confused when he was in hospital. He didn’t know where he was or what was going on although, thankfully, he always seemed to know who I was.

“We now knew that nothing could delay his death. I didn’t want him to die in hospital without someone who loves him holding his hand. But, caring for him at home was so difficult – I was really scared about what might happen. The pandemic meant that I had to do a lot for him on my own and I constantly worried about him falling over or down the stairs and not being able to get him back up again.

“I was just trying to do my best for Jeff but it was really stressful because, as Jeff was over six feet tall and well-built, I physically couldn’t do some of the simple tasks that the man I had loved for over 40 years needed me to help with. It was a really swift decline – we couldn’t keep pace with the rapid deterioration in what he was able to do for himself. Every other day, something else would change as he became less and less able to sit up, eat or speak.” 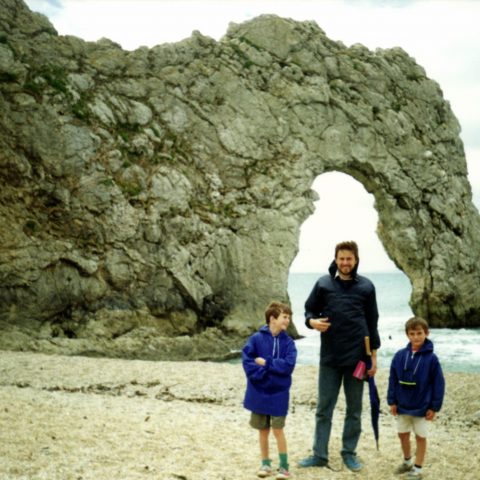 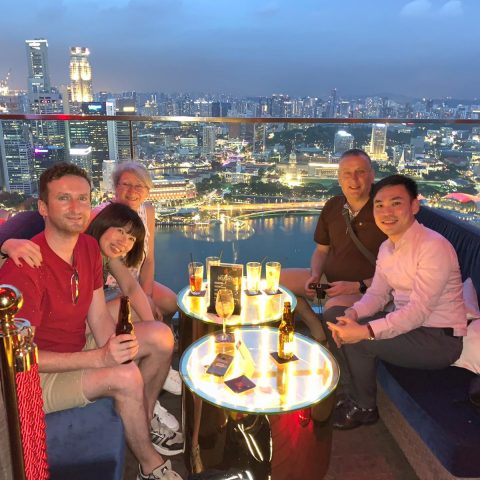 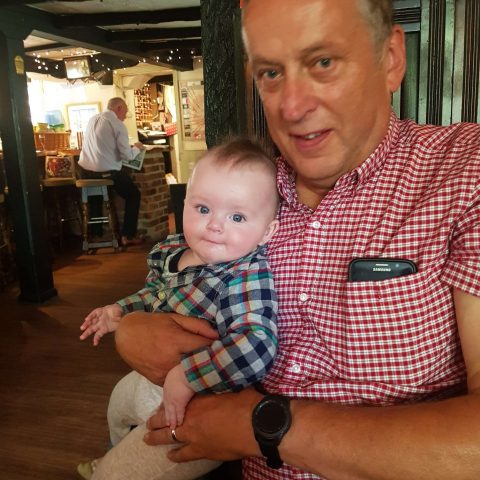 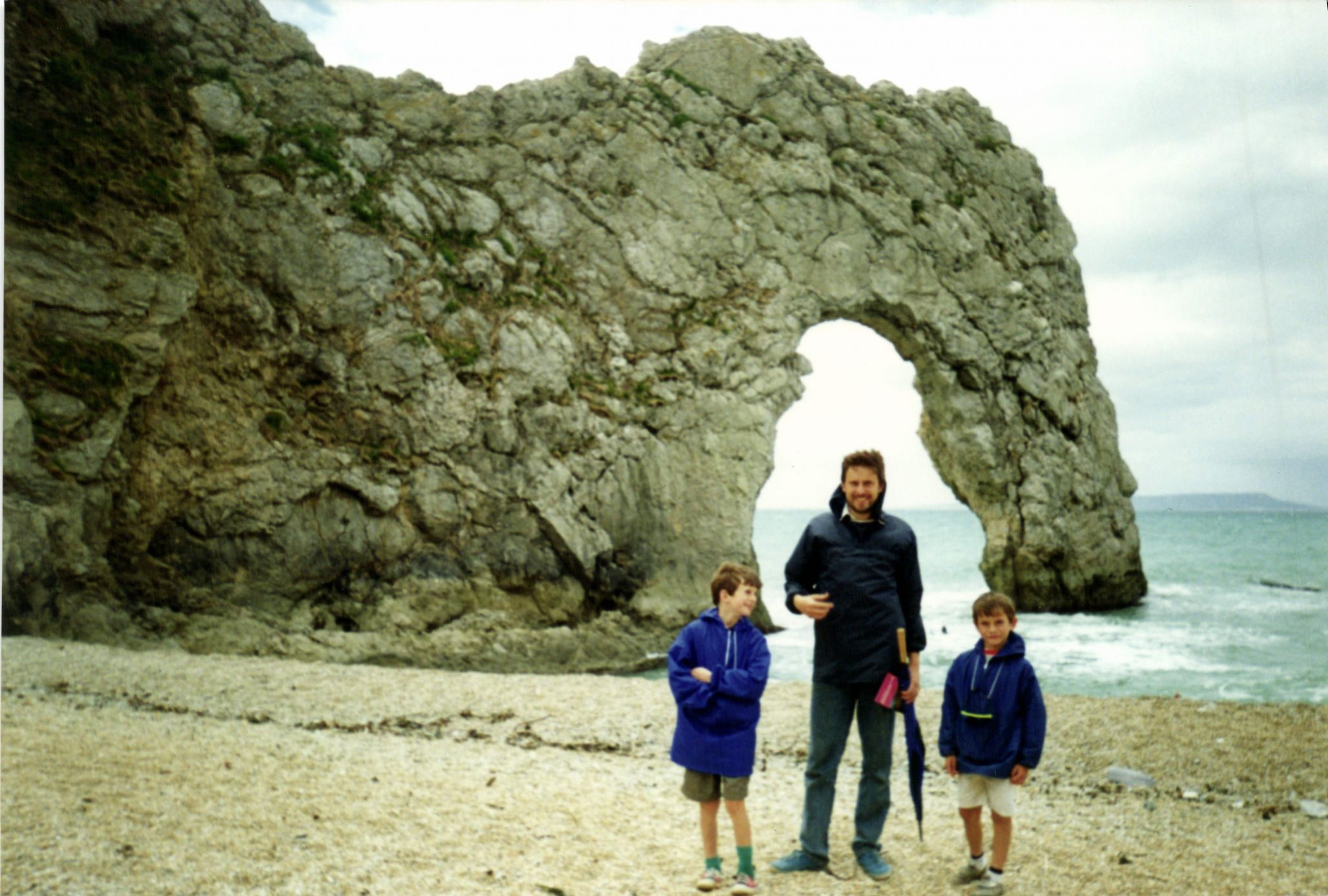 Jeff with his two sons when they were growing up. 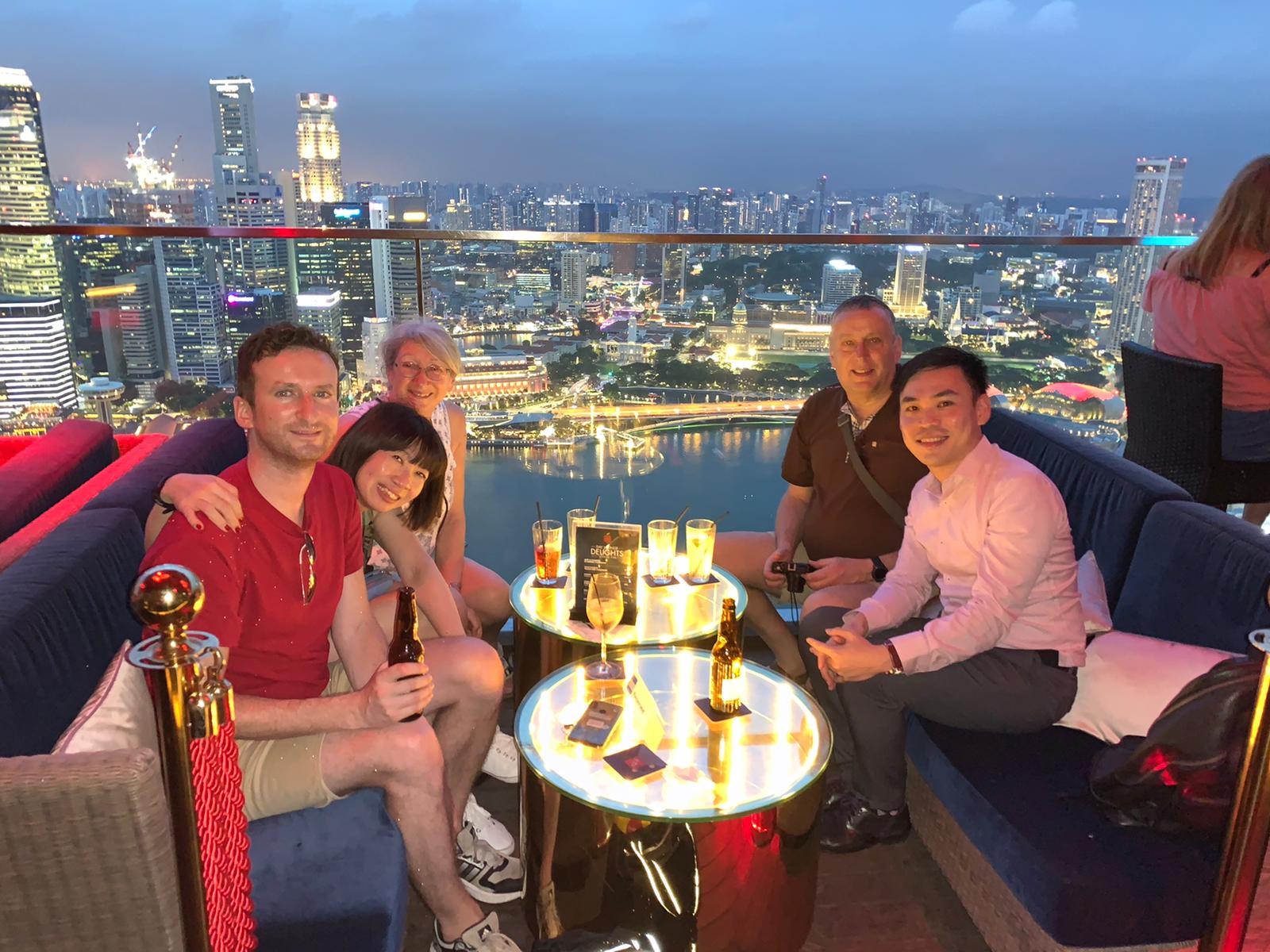 The family loved being abroad, including visiting friends in Singapore. 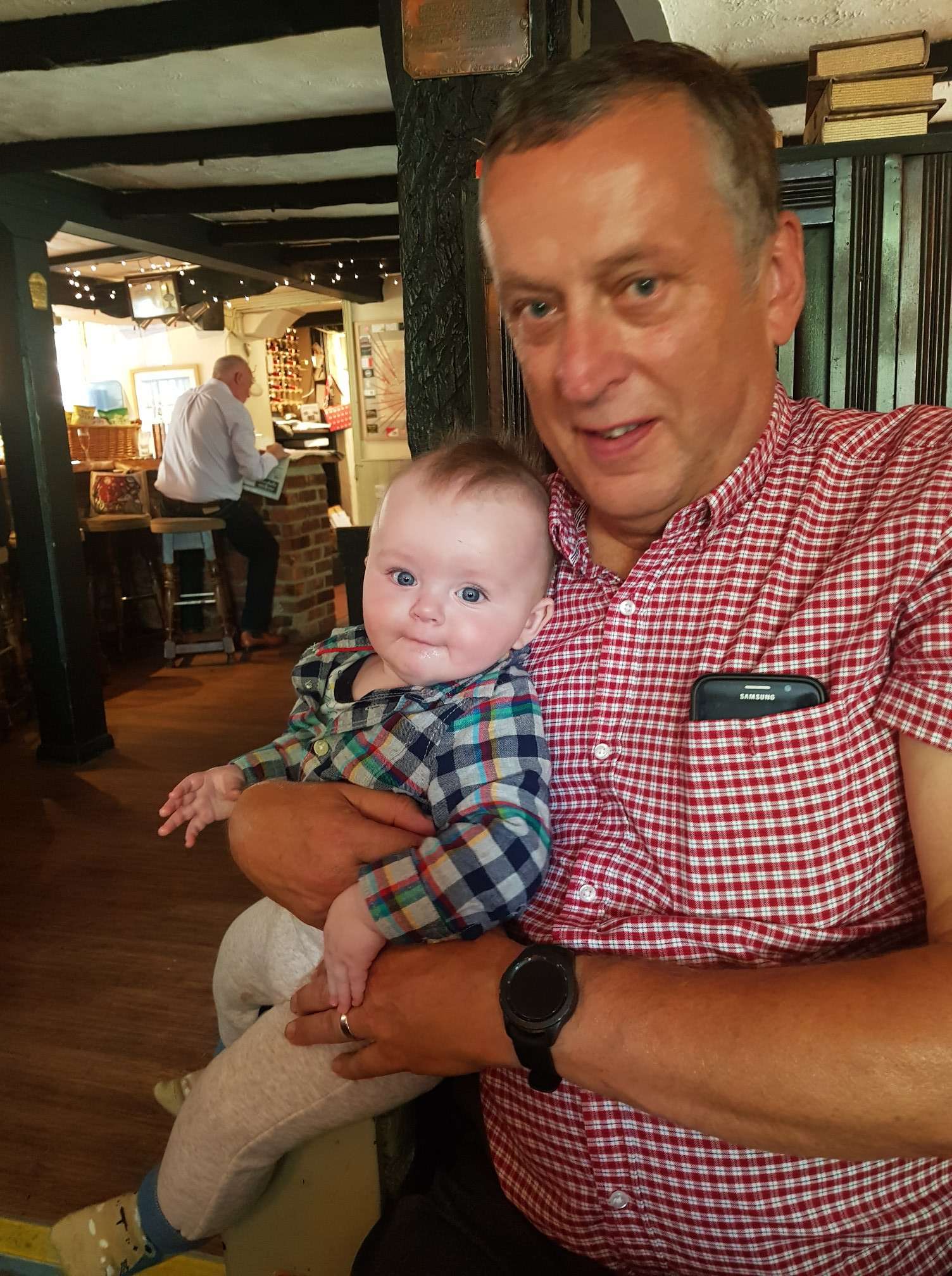 Jeff with his grandson, Lucas.

The restrictions in place due to Covid meant that the support available to Lesley was limited as services were over-stretched or paused. For example, there were no supportive carers meetings to offer advice or consolation and a hospice volunteer had to teach Lesley how to massage Jeff to help with pain relief as she wasn’t allowed to touch patients.

Lesley had to regularly pick up Jeff’s prescriptions from a chemist, which meant leaving him on his own – despite the concern that he could be unwell or fall in her absence. The days consisted of keeping the house clean, cooking and doing regular rounds of laundry to keep Jeff clean and dry, as well as finding time to keep him company by reading or playing cards.

All of this was alongside Lesley’s own medical needs, having been diagnosed with Diabetes and Barrett’s oesophagus for which she takes regular medication and has annual check-ups.

Lesley said: “Time and time again as the weeks went on, I asked about what I could expect from Jeff’s condition. Each time I was told that ‘everyone is different’ which isn’t helpful in terms of navigating the unknown. I couldn’t prepare for anything or what changes might come next as Jeff got increasingly unwell.

“Somewhere in the back of my mind, I knew that he wasn’t getting better but I had no time to think about that and I just had to keep going on the daily carousel of caring”

In July, Jeff had a massive seizure at home and Lesley called an ambulance. No one had ever told Lesley that there was a risk of seizures occurring. He was given pain relief by the paramedic who requested a visit from the out-of-hours GP to fit a pump driver to better manage his condition overnight. This was in line with the Treatment Escalation Plan, which specified no hospitalisation, so that Lesley could be with him when he passed away.

Despite being told of the Treatment Escalation Plan, the GP refused to attend and so Jeff had to be taken to hospital instead. Lesley has since filed a complaint to the General Medical Council which is still under investigation. Jeff was admitted to Salisbury Hospital via A&E and given a bed on a dementia ward where he spent the next week. On the last day of July, Jeff moved to a hospice when a bed became available. Sadly, he passed away in the early hours of 2 August after having another massive seizure. Lesley had seen him for the last time the previous evening at 6pm. The seizure had happened so quickly that there was no time for the hospice staff to contact Lesley so that she be with him for those last moments.

Lesley said: “Losing Jeff was just awful. It all happened so unexpectedly just nine weeks after his diagnosis – we had no time to get used to it at all.

“In those final weeks, Jeff would communicate by squeezing my hand, especially if I was talking about all of our great memories together – and I would know that he was still in there and aware of things around him even though he couldn’t speak or see anymore.”

Lesley and Jeff had been on many travel adventures together over the years including crocodile hunting in Borneo, trekking through the Amazon rainforest and along the Cang Shen in the foothills of the Himalayas, and zipping over the ocean in a jet boat in New Zealand.

They had visited friends around the world in Canada, Singapore, Switzerland and The Netherlands where they had happily lived for eight years. They took their boys on many camping trips and, on one occasion, they returned to the camp site to find that their tent had blown away. They also took road trips all around Europe exploring history and culture as well as kayaking the rivers and sampling the local food.

On their final trip together, they flew into Auckland and explored both the north and south islands of New Zealand before travelling to Melbourne, up to Cairns to dive in the Great Barrier Reef then down to Adelaide and Sydney before returning to the UK. Irreplaceable memories include travelling inland to Uluru to have dinner under the stars, having a campfire barbeque in an old canyon in Alice Springs whilst being watched by kangaroos and catching a performance at the Sydney Opera House.

Their plans to return to the West Coast of Australia and island hop across the Pacific to San Francisco will sadly never come to fruition. Lesley still has the travel bug and she is planning to spend a couple of months in South America soon, which she and Jeff had originally planned to do in January 2021.

It was following Jeff’s diagnosis that Lesley searched online for information and found The Brain Tumour Charity’s website. She thinks that sources of information and support, such as those which the Charity provides, should have been flagged up by the Care team at the hospital.

She said: “I had to find all of the information myself yet it has helped me to understand what has happened to Jeff and the real devastation which brain tumours can cause. Other people’s stories really helped to provide a context to what was going on in my own life.

“The hospice, I am sure, would have provided a lot more support and information if it wasn’t for the pandemic. But, because they were adjusting to the circumstances too, they couldn’t offer as much as they would usually do. But we still need help and support during these tough times, to be able to give the ones we love the time and energy they need from us.

“The weeks when Jeff was in hospital were worse than the nightmare of worrying about caring for him at home – at least I could see him and speak to him then. The pain of the isolation for both of us during the hospital stays during Covid will remain with me forever – as will the feeling that I failed him at the end by not being with him when he died.

“Jeff and I had been together since we were in our 20s. He was the love of my life and all that I had ever wanted or needed – Jeff was the sweetest and kindest man with a huge heart. Now he’s not here and it’s really hard – I feel that brain cancer has robbed us of the future which we had planned together.”

Find out more about the support services we offer here.

You can help us to fund pioneering research to find a cure as well as support people affected by a diagnosis.