"Doctors dismissed my symptoms as a cheese allergy!"

Desperately taping her eye open, Allana Prosser was determined to prove doctors wrong and see out of her right eye again after a devastating operation to remove a deadly brain tumour - months after it was misdiagnosed as a cheese allergy.

Now in recovery, Allana is sharing her story to raise awareness and give hope to those in a similar situation.

"I count myself as one of the lucky ones. I survived and have been given the chance to live my life."

Allana’s nightmare ordeal begun in 2009, aged 11, when she started having headaches while she was at primary school.

"I had them every day and took two paracetamol every four hours like clockwork to even touch the pain and I also felt sick every morning."

Allana's symptoms continued to worsen until she was barely struggling to stay awake at school or go out with her friends.

"All I wanted to do was sleep," she said. "From the moment I walked into the house from school, I just flaked out - eventually, I lost all my friends as I was so tired I didn’t want to go out.

"I also had very blurry eyesight and couldn’t see the whiteboard at school, but I went to the optician for an eye test and it was fine."

While other teenagers were having fun with their friends, Allana’s life was put on hold - making her feel completely "isolated".

From 13 onwards, she begun waking up in the middle of the night feeling sick, only to collapse at the bottom of her mum and step-dad's bed.

"They called 999 several times and I was taken to hospital and put on a drip. Despite my constant headaches and sickness, no one ever suggested I should have a brain scan."

Things continued to deteriorate and by 14, Allana hadn’t started her periods and also had delayed growth.

I was at least a head-and-half shorter than my classmates and didn’t get my periods like the other girls. We went to the GP who just said to come back the following year or when I was over 18. Like most teenagers I wanted to fit in, but I felt different.

Allana also developed a “raging thirst" - which meant she was drinking up to ten litres of water a day.

Doctors once again dismissed her symptoms, and told Allana's mum she was just "thirsty".

Allana kept going back and forth to the GPs who repeatedly turned her away - even though she also had balance problems and, every few months, episodes of vomiting and blacking out.

In fact, one doctor even claimed her concerning symptoms were down to a cheese allergy.

"He asked me to keep a food and drink diary for two weeks," Allana said.

"When I went back, he flicked through the first few pages and read that I ate cheese sandwiches for lunch at school and loved pizza and lasagne.

"He said my headaches were triggered by a cheese allergy and suggested I stopped eating it.

"But I didn’t stop because I knew there was something far more seriously wrong with me - you know your own body.

"My parents were worried sick but no one was listening to us."

Despite her struggles, Allana passed all her GCSEs in 2014 and got an apprenticeship at a wedding shop.

But at 16, her confidence was shattered when she became incontinent.

"It was so embarrassing," she said. "I had to give up my apprenticeship and was soon scared to go out in public at all.

"Other people my age were going out partying and there I was at 16, scared to wear white clothes and rocking a Tena lady – not a great look!"

She was put on incontinence medication and when she developed a twitch in her right eye, doctors told her it was a side effect.

"My mum broke down and I was really embarrassed – but her meltdown saved my life."

After over 20 visits to the GP, Allana was finally diagnosed with a brain tumour in May 2015 when she went to the optician again about her headaches and twitchy eye.

"I went to Specsavers and the optician said there was pressure behind my eyes. She sent me to the emergency eye clinic at my local hospital, but they said they couldn’t see anything.

"As we walked out, my mum broke down and I was really embarrassed – but her meltdown saved my life.

"When a doctor saw what state she was in and asked her what was wrong, he arranged a CT scan."

Doctors said they could see something on Allana’s brain and that she needed a more detailed MRI scan.

"I was so nervous and Mum came in with me," she said.

"As I Iooked at the screen, it went from ‘body scan’ to ‘head scan’ and I saw my mum’s face change.

"’What is it? What can you see?’ I asked "She was trying to smile but she had tears in her eyes."

Then a doctor broke the news that Allana had an orange-sized brain tumour formed from embryonic tissue, which she had been born with.

The tumour was on her pituitary gland and pushing against the optic nerve on her right eye, which explained her delayed periods, growth, uncontrollable thirst and headaches.

Allana said: "Doctors told me that I was a week away from death due to a build-up of fluid on my brain.

"But I didn’t show any reaction - I felt frozen. I sat there in silence while my mum was an emotional wreck.

"By that point, I felt so ill, part of me was just relieved they finally knew what it was."

The next morning, Allana was forced to have a life-saving five-hour operation at Coventry University Hospital to drain fluid on her brain.

A week later, she underwent a 10-hour craniotomy and surgeons removed most of the tumour.

Biopsy tests confirmed it was a slow-growing, low-grade craniopharnigioma, formed from embryonic tissue.

"It felt weird that I’d probably been born with it and that I’d walking around for years with this thing inside in my head which nearly killed me," she said.

Allana, who has dubbed her tumour Gemima as she’s a Gemini, was in intensive care for a week and hospital another four weeks.

She recovered well from the surgery but was told her right eye would never open again.

Desperate not to wear an eye patch, she started taping her eye open.

"There was no way I wanted to wear an eye patch.

"Every day for a couple of months, I put masking tape over my eye for a few hours to stimulate the eye muscles.

"God knows how I came up with the idea, but it worked."

In February 2016, Allana went to Jacksonville, Florida for three months to have proton beam therapy to shrink what was left of the tumour.

A few months after her treatment, Allana was referred to a fertility clinic as it was feared she may not be able to conceive.

"At 16, it felt surreal to talk about freezing my eggs," she said. "After tests, though, I was told that I should be able to become pregnant so didn’t have them frozen."

But last year she had devastating news at a check-up - where she was told her fertility had been affected after all as the tumour had stopped her brain from sending hormone signals to the rest of her body.

"It was a shock which I’m still struggling to process. It’s a conversation I’ll have to have with a partner one day if we decide we want a family. But hopefully we’ll have treatment options."

Now, Allana has scans every six months and her tumour has remained stable.

However, she has continued to remain positive and begun studying counselling at the University of Coventry so she can eventually work with children.

She is also a Young Ambassador for The Brain Tumour Charity and is backing the HeadSmart campaign, which raises awareness of children and teenagers’ brain tumour symptoms to reduce diagnosis time.

"It helps hugely talking to other people who understand.

"And I want to share my story to help others – if one person gets an earlier diagnosis and one life is saved, it’s worth it.

"It means so much to me to support other young people who are struggling with the impact of their brain tumours."

Thanks to Allana, about 20 GP surgeries across Warwickshire are stocked with HeadSmart symptom cards.

Allana has vowed to make the most of her life. 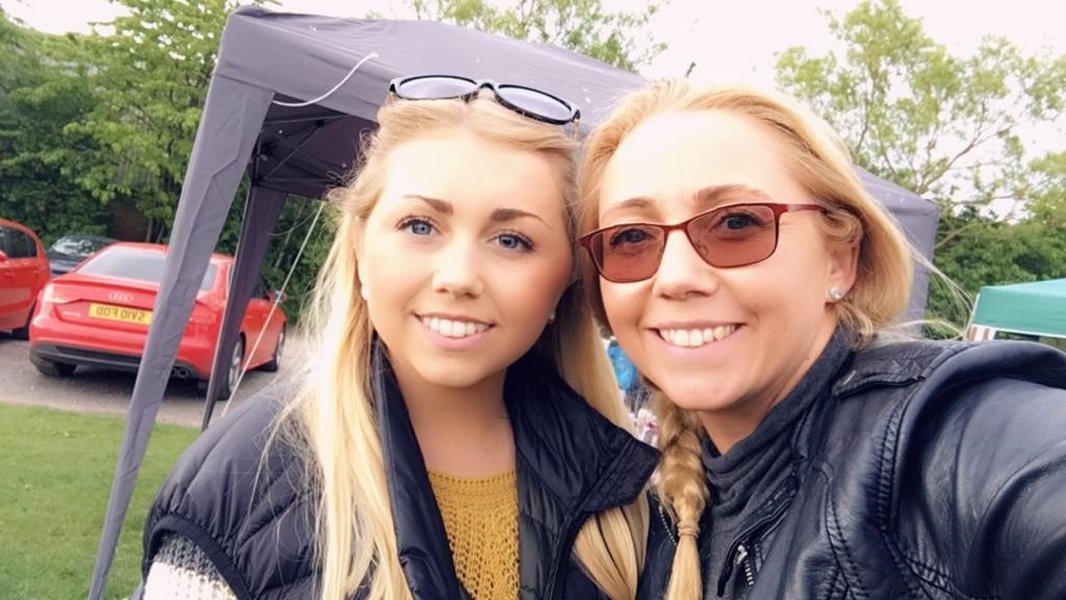 One of the lucky ones

"I am still living with Gemima but I feel truly blessed with love and support," she said. “And I'm determined to make the most of every minute because I'll never forget that I am one of the lucky ones."

Sarah Lindsell, The Brain Tumour Charity’s chief executive, said: "We are so grateful to Allana for sharing her story to help us raise awareness about brain tumour symptoms and how crucial early diagnosis is.

"And we are inspired by how she is turning her horrendous experience into a positive by backing our HeadSmart campaign.

“HeadSmart has two aims: to save lives and reduce long-term disability by bringing down diagnosis times.

“Although, on average, our HeadSmart campaign has halved diagnosis time from 13 weeks to 6.5 weeks, teenagers’ diagnosis time lags behind at 10.1 weeks as their symptoms are often mistaken for other problems that typically affect that age group for example, mood swings caused by puberty or headaches triggered by exam stress.

"We are so proud to have Allana as one of our 23 Young Ambassadors who play such a crucial part in delivering our message."

Mum teaches young son what to do when she has a seizure.

“It’s so important that everyone has access to the same treatment, care, support and medical expertise.”