Andy Chalmers, 47, from Carnock has walked the nearly 1700 miles between the most southerly and most northern points in the UK over the last 254 days since 9 October, which is the anniversary of Suez’s death in 2018 following her brain tumour diagnosis.

Andy beat his initial aim of completing the walk by the same date later this year. So, he will be taking on another challenge to walk the 620-mile length of Ireland before the poignant date in October as well.
Due to the pandemic preventing the route from being walked directly, Andy has been clocking up the miles around his hometown looking to walk an average of five miles every single day over the 12 months.

He had originally planned to complete the first part of the challenge and reach his halfway point by early April. However, despite the cold winter weather, Andy has long been well ahead of his target having completed the first leg of his walk and 1000 miles of the challenge by the end of February. He reached that landmark stage on what would have been Suez’s 45th birthday.

Andy had planned to walk from Dawn to Dusk along the Fife Coastal Path in April to try and cover as many miles as possible in the 14 hour slot. However, due to the continuing Lockdown restrictions, this is postponed until later in the year when more people take walk with him.

Andy said “I have spent so much time walking alone during the North to South part of the challenge that I am desperate for friends and family to be able to get involved in Dawn to Dusk and so many have asked about how they can walk with me. So, I’m delaying this until the lockdown restrictions have eased a little which will hopefully be in September“.

Andy is doing all this to support The Brain Tumour Charity. He had an initial fundraising target of £3,500 which he smashed having raised an amazing £8,000 so far. Andy and some of Suez’s family and friends are also setting up a fundraising group to further support the Charity once he has hung up his walking shoes too.

Andy said: “The walk has been absolutely invaluable in keeping me going through all of the Covid lockdowns. Having that target to focus on has been crucial to help both my physical and mental health. Going out for a walk after a day working in front of the laptop at home really reduces stress and improves my mood.

“The support I’ve received through social media has been such an inspiration, with many messages even coming from those who I don’t know but have started following my journey. Sharing stories with others currently going through treatment for a brain tumour, or who have lost loved ones, has reminded me on a number of occasions exactly why I am doing this and kept me walking through the difficult days.”

Andy and Suez first heard about The Brain Tumour Charity in 2018 and were actively involved in fundraising initiatives including a Loony Dook in the North Sea at St Andrews for Suez’s sister’s 40th birthday.

In 2019, Andy’s work, Aegon, where Suez also worked for over 25 years, voted for The Brain Tumour Charity as their Charity of the Year. He also ran his own fundraising walk last year in Dunfermline as part of the Charity’s flagship event, The Twilight Walk. In total, Andy has helped to raise over £30,000 for the Charity.

Andy added: “The charity has provided a focus at various points which has been really helpful and also they have always been so understanding and empathetic when I have spoken to the team. It is such a boost to know that I am, in some small way, helping the charity to find new treatments, and eventually a cure.”

Andy is now over halfway through his virtual walk that spans nearly 1700 miles. 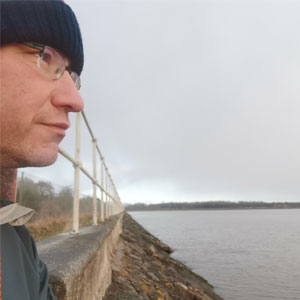 He's walking in memory of his wife Suez, who passed away from a glioblastoma in October 2018. 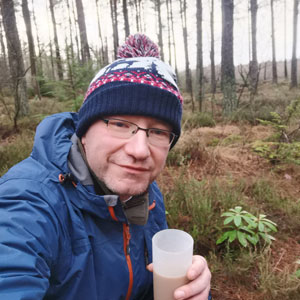 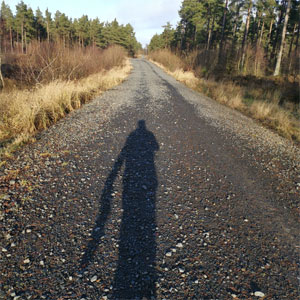 Andy is now over halfway through his virtual walk that spans nearly 1700 miles.

He’s walking in memory of his wife Suez, who passed away from a glioblastoma in October 2018.

Andy and Suez first met in 2001 when they worked together. She was diagnosed with a Grade 2 anaplastic astrocytoma the following year and she had surgery followed by chemotherapy and radiotherapy. However, it wasn’t until 2007 that they became a couple and, within a few short months, they were engaged and then married in May 2009.

However, just months before their wedding date, a regular scan showed that Suez’s tumour had grown. The surgery which followed revealed that the tumour had mutated to a Grade 4 Glioblastoma and more treatment followed. In the years following Suez and Andy made the most of their time together, including a round-the-world trip. However in early 2018, Suez’s condition got worse and, despite more surgery and radiotherapy, she sadly passed away in October that year.

She left behind her mum Issy and dad Frank, sisters Louise and Kirsty as well as their families including three nephews and a niece as well as Andy’s parents, brother and his family, including a nephew and niece.

Andy said: “It felt like our whole world had fallen apart when we found out about the Glioblastoma in 2008, especially when we had just begun to plan our futures together. We had no idea what Suez’s life expectancy would be – so we decided not to try for kids, which is something which Suez never really got over.

“Suez never let her diagnosis rule her life – her approach was always that we looked forward together. We supported each other as much as we could and I was there for her whenever she needed me as she suffered from depression.

“She would do anything for her family and her close friends – there was nothing and no one more important to her than them. We were all so close and we helped – and continue to help – each other through things, for better or for worse.

“Part of why we worked so well together was that we were able to have ‘comfortable silences’. There was no need for mindless chatter. We were both just happy in each other’s company if we were watching TV, reading or relaxing together.

Most of all, I miss our weekends away when we would just potter about, have some drinks and savoury snacks and people watch. We were at our happiest exploring new places and finding bargain places to stay.”

Andy said it has been a slow process adapting to living alone again and to concentrate on things like work. The milestones, such as birthdays and anniversaries, are consistently tricky, which is why is he marking the anniversary of Suez’s death as the start and end points for his walking challenge to give a positive focus to what will always be a sad day.

He added: “A brain tumour is such a complex cancer to try and understand. No grading is really safe. We need more awareness, early diagnosis and effective treatments as this could give people a better chance of something positive happening for them. A cure really would be the dream scenario, of course.”

To help us accelerate research into a cure you can donate to Andy’s fundraiser or download our ground-breaking BRIAN app.

BRIAN is revolutionising the way we tackle brain tumours, by helping you take control of your diagnosis and shaping the future of brain tumour research.

First, BRIAN supports you by tracking symptoms, appointments, moods and more. Then, your anonymised data will go to world-leading scientists, who’ll use it to kick start vital research.

By signing up to BRIAN and logging your experiences, you can track your progress while being part of the cure.

BRIAN is the biggest data collection project in the history of brain tumour research, powered by those affected by this disease.