Finding love has made me feel like a woman, not just a cancer patient

Jen was diagnosed with incurable brain tumour at 15. At 24 she found love on a dating app when she was at her lowest after losing her hair

Jen McCrea, 24, from Dunstable, Bedfordshire, was diagnosed with her tumour at 15, and feared she'd never meet someone who accepted her for who she was.

Two years ago, after steroids made her weight balloon to 17 stone and from a size 12 to size 20, Jen decided to join a dating app.

'When I summoned up the courage to put my profile on a dating app, my confidence was at an all-time low after four major brain surgeries,' she said.

'I was bald after stress made my hair fall out, steroids had made me put on 3.5st and I had a bloated moon face - I didn't even recognise myself in the mirror.' 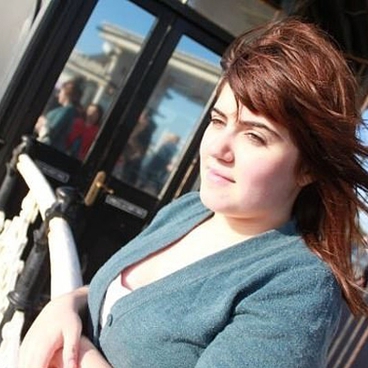 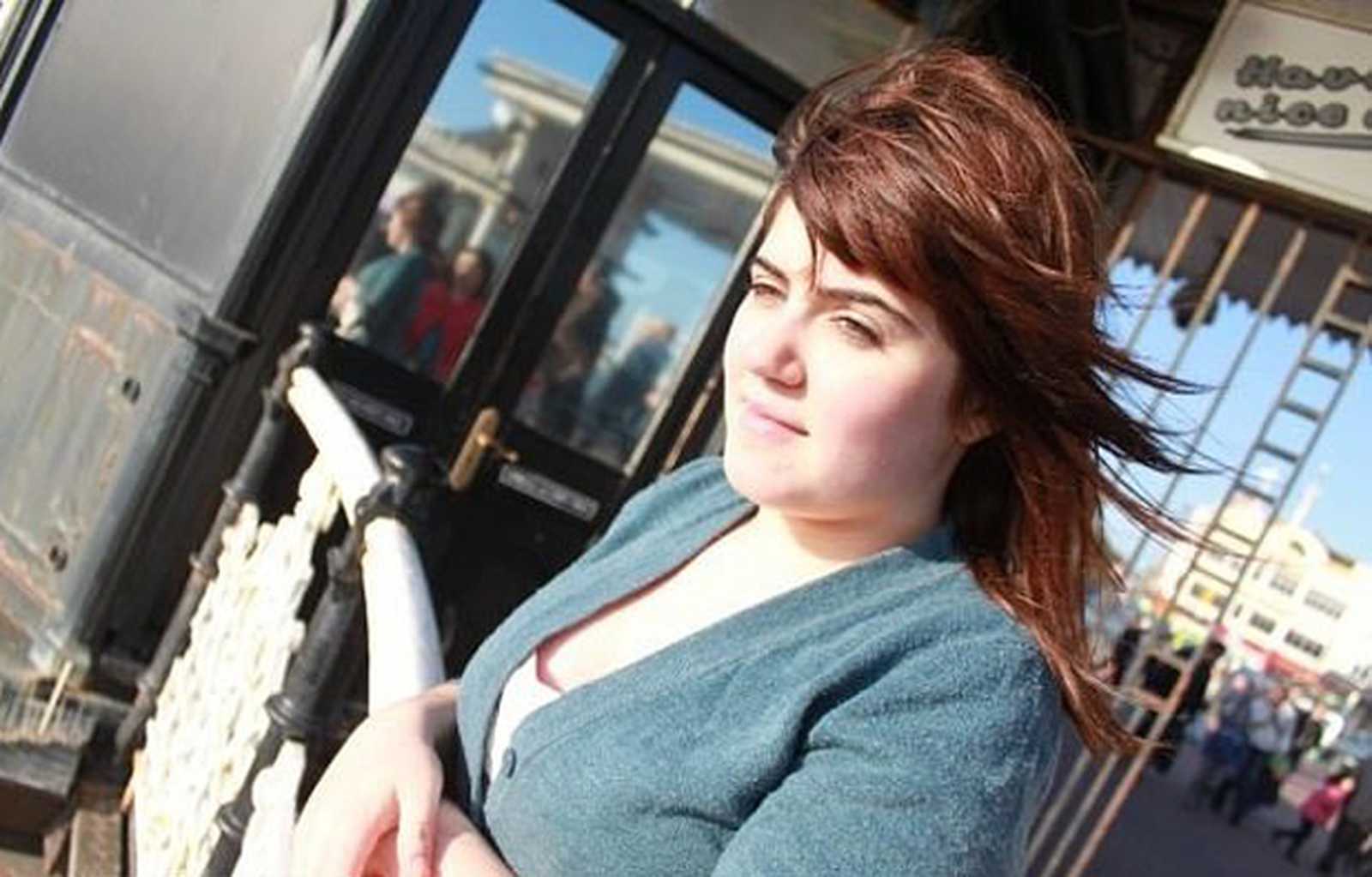 Jen, pictured in 2015 when she was diagnosed, had an 11-hour craniotomy in September 2011 to remove as much of the tumour as possible. Her tumour is now grade 2/3 cancerous 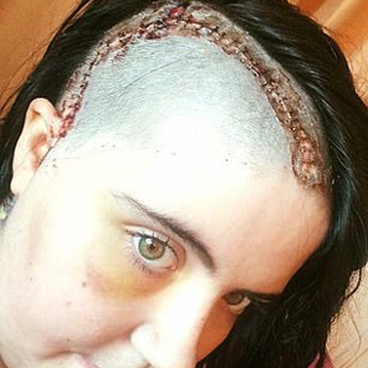 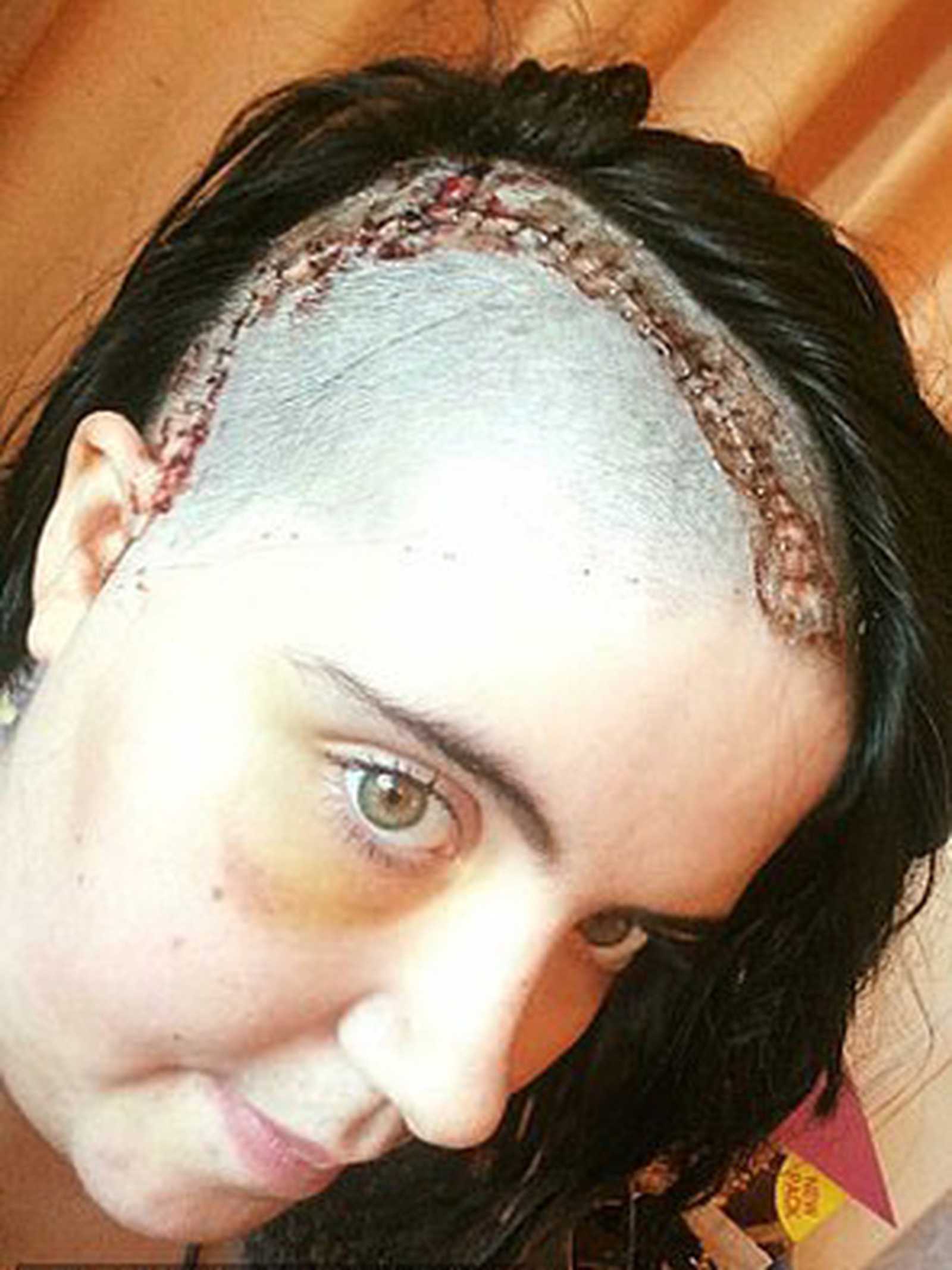 Jen is pictured after cranioplasty surgery in 2015 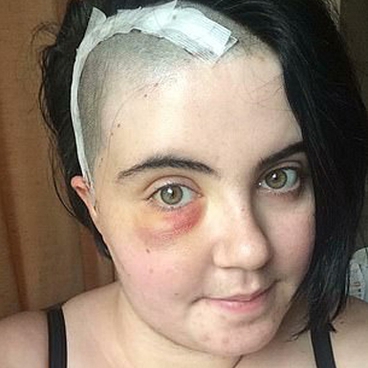 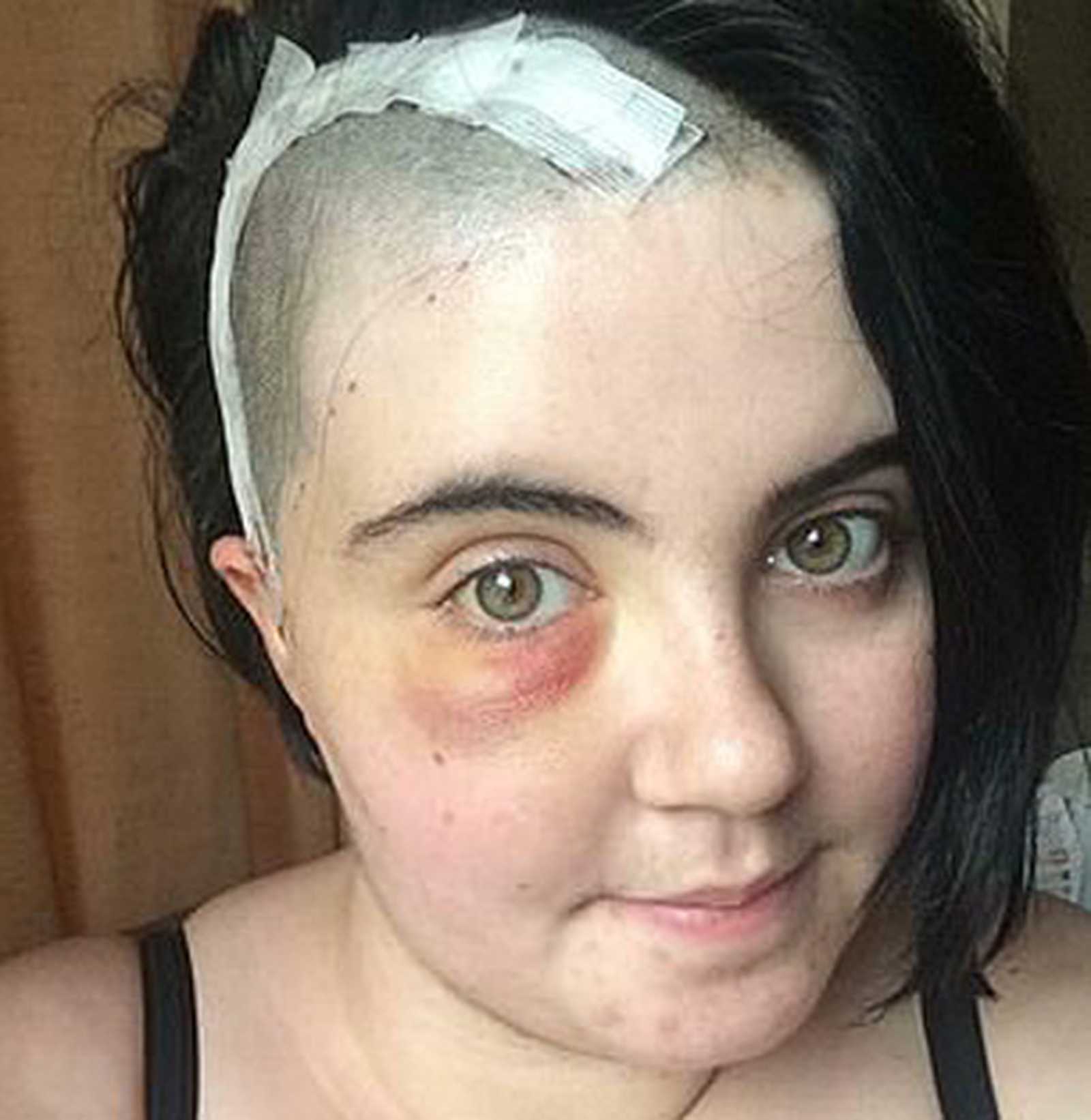 Jen, pictured after surgery, said her confidence was at an all time low when she met partner Callum

However her now boyfriend Callum Daly, 25, wasn't fazed at all when she confided in him about her brain tumour and messaged back: 'I think you look beautiful with or without hair, you rock bald.'

The couple are still together and Jen credits Callum with making her 'feel like a woman again instead of a cancer patient.'

Jen said: 'I didn't know if I was searching for love or looking for myself, but when I found Callum, I found both.

'He's made me feel like a woman again and given me back my zest for life I had lost through the challenges and pressure of a life, which consisted almost entirely of back-to-back treatments, therapies and scan results.

'The only physical contact I had was from doctors examining me or carrying out tests. Now it's so comforting to have the intimacy of a relationship and be held close by someone who loves me.' 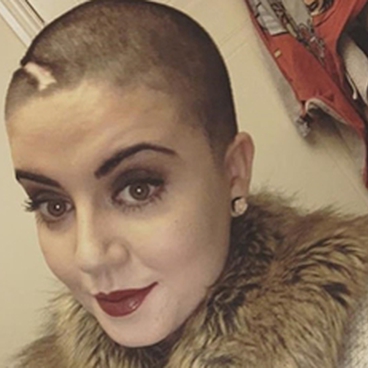 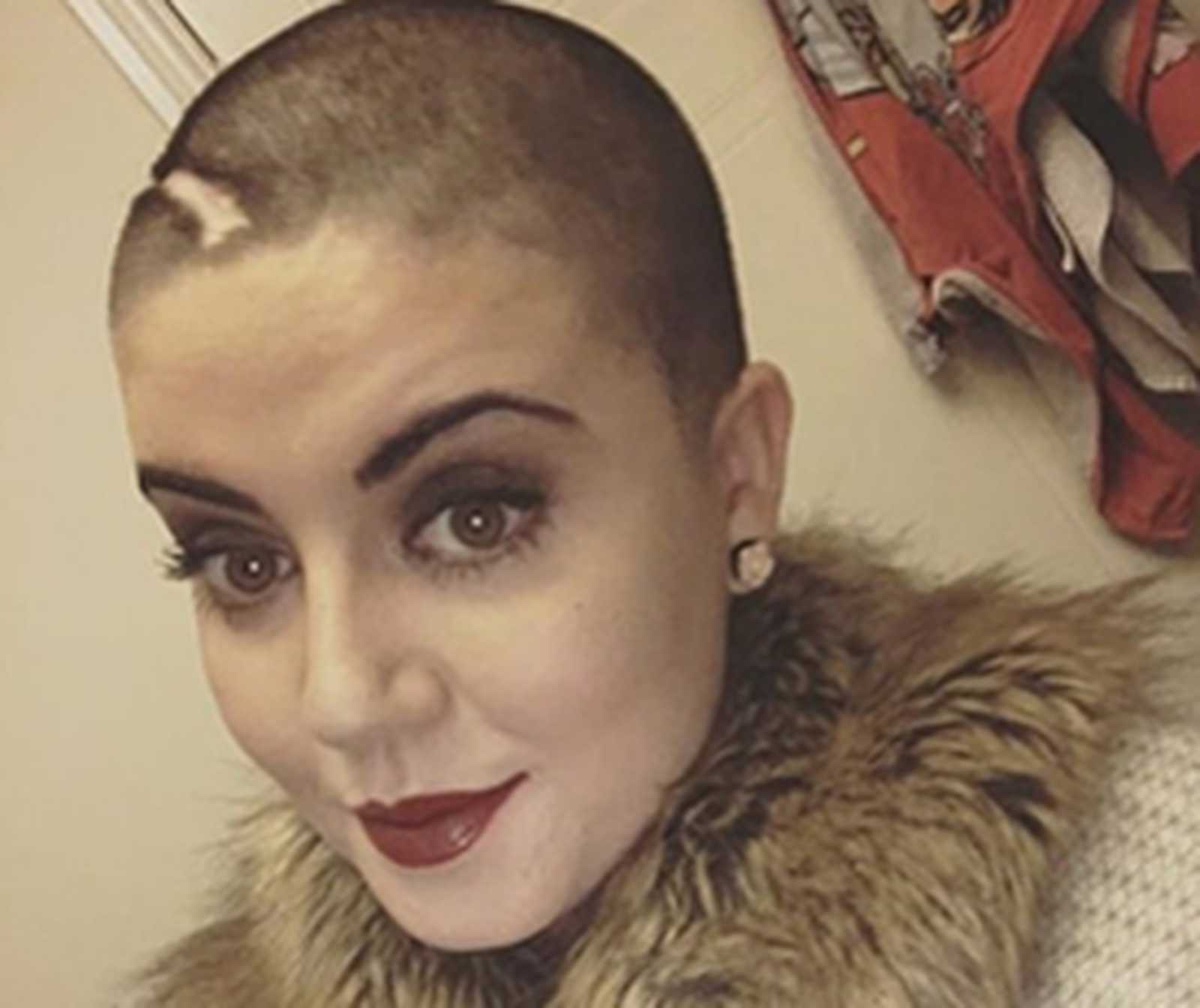 Since her diagnosis Jen, pictured with her scar, has undergone four major brain surgeries 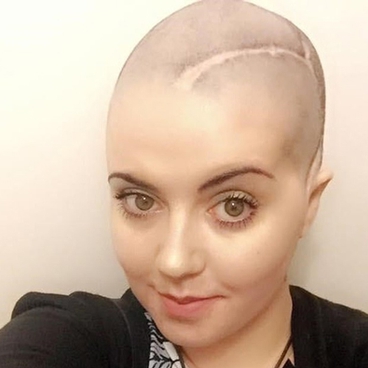 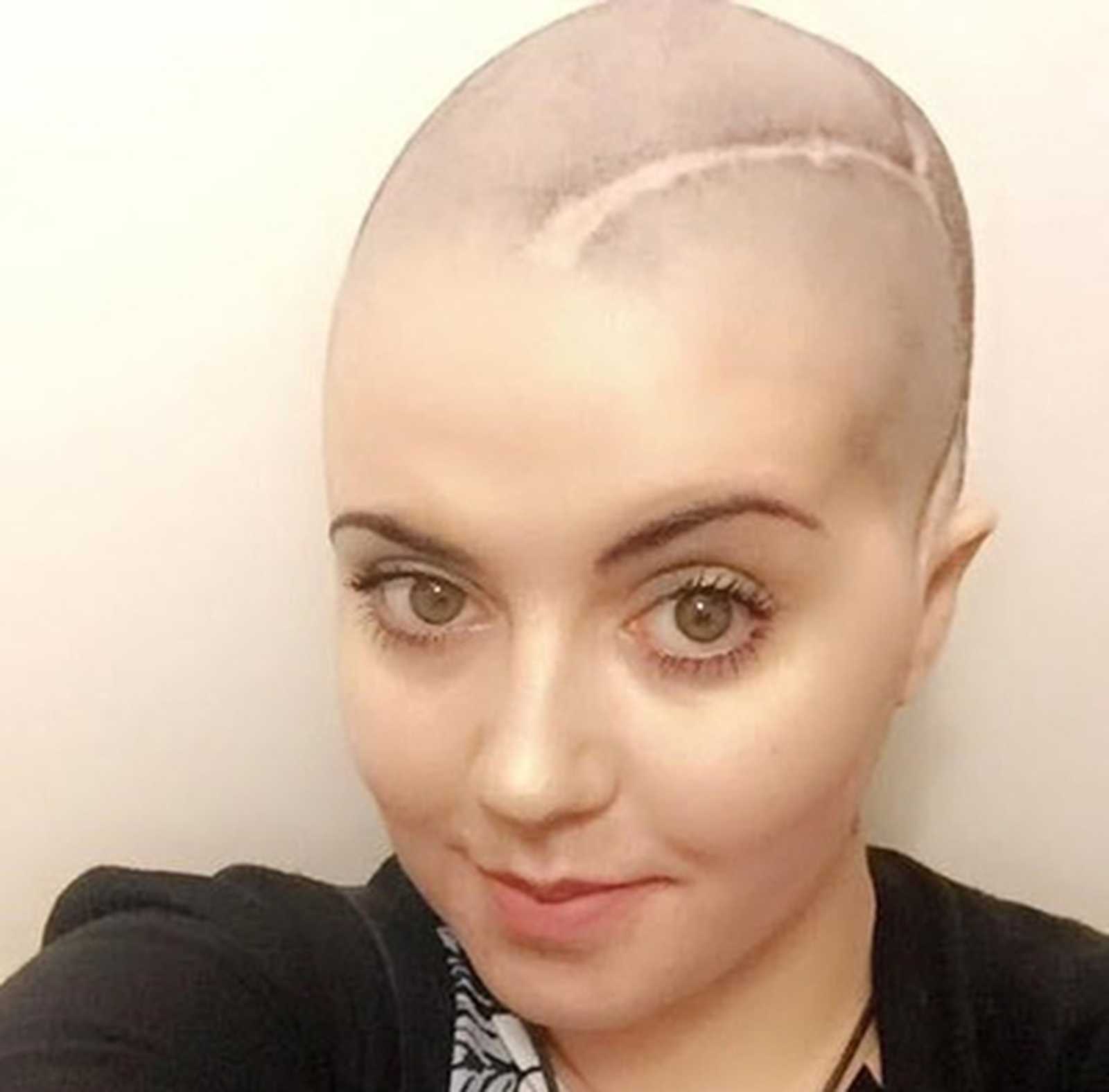 Due to steroid treatment Jen, pictured in 2015 after surgery but before she started steroids, ballooned to 17 stone and went from a size 12 to size 20 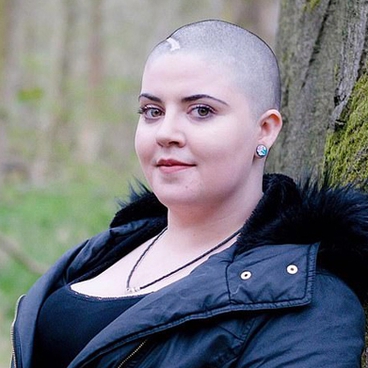 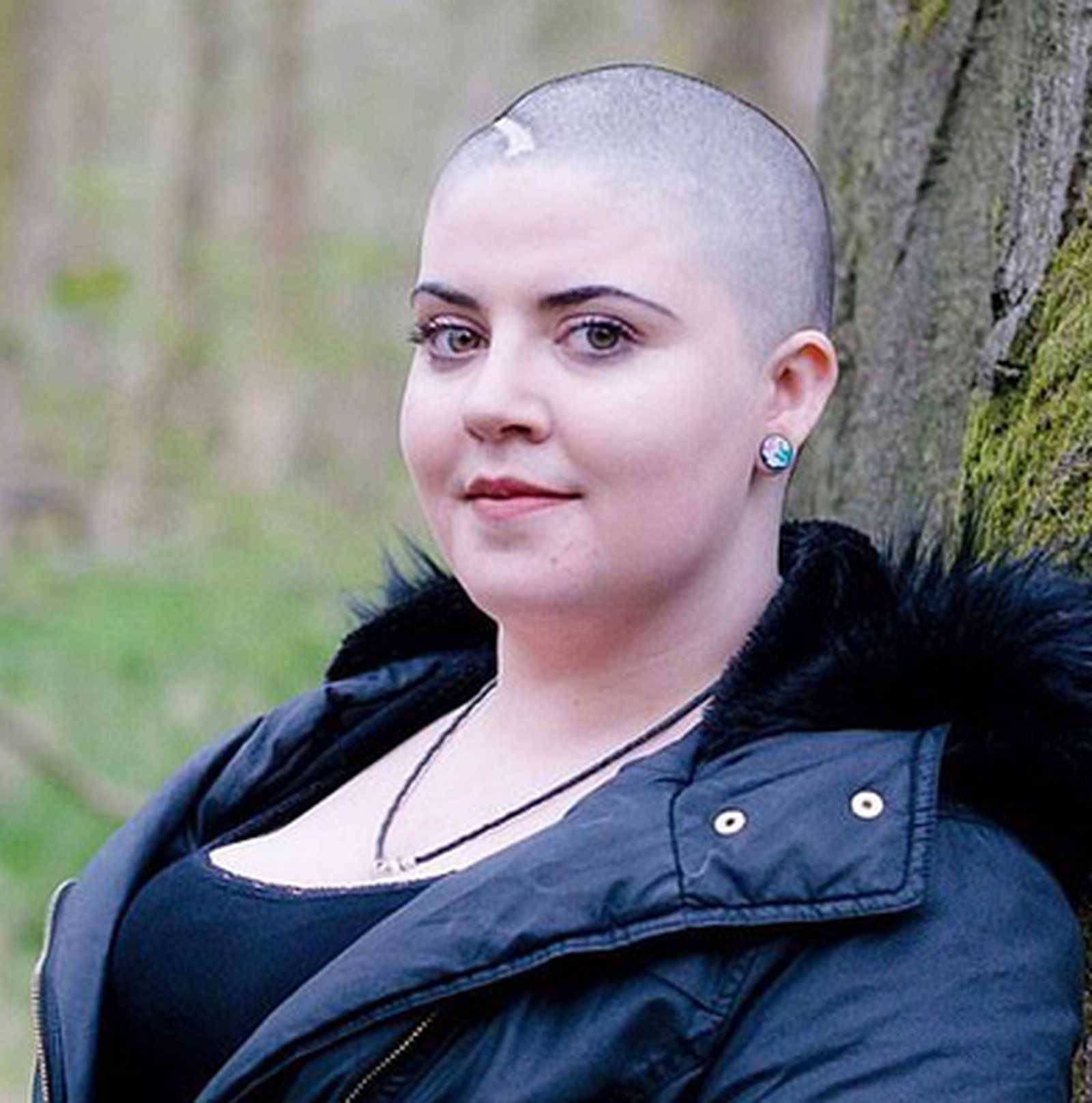 In 2017 Jen, who writes a blog, uploaded several photos of herself bald, with a buzz cut and wearing different wigs on a dating app.

She explained how Callum's profile quickly stood out as she 'thought he had a cute smile' and the pair chatted online and on the phone for a few months.

Jen said: 'He didn't come out with any corny chat-up lines, which I really liked. He was just interested in how I was and finding out more about me.'

Jen said she was honest from the outset and told Callum about her tumour as soon as he asked.

She explained: 'As a Young Ambassador mentor for The Brain Tumour Charity, I'm always open about my condition, so I told him I had a brain tumour and gave him an insight into my story.'

Jen was diagnosed with a grade 2 (non-cancerous) oligodendroglioma at 15.

After two years of symptoms including headaches, personality changes and fainting episodes, doctors put it down to puberty – dismissing her as a 'stroppy teenager.'

She had an 11-hour craniotomy in September 2011 to remove as much of the tumour as possible and has since had three more operations. Her tumour is now grade 2/3 cancerous.

Callum wasn't fazed at all when she confided in him about her brain tumour and messaged back: 'I think you look beautiful with or without hair, you rock bald. I'm sorry to hear about what you've been through, and I think you're incredibly brave. You're a really interesting person and I'm intrigued to find out more about you.'

After months of talking Callum and nervous Jen, who hadn't had a serious boyfriend since her diagnosis, decided to meet in person.

Jen said: 'My lack of self-confidence made me put up a barrier and fear that telling people I had a brain tumour would just put people off.

'And I also worried about would it be fair on someone – what if I got ill again?'

Callum, an internal communications executive, was also jittery on his way to meet Jen at a hotel bar - but the couple had nothing to worry about.

Jen said: 'I instantly felt comfortable with him and instinctively knew I could trust him – he was so caring and funny, too.

'On our first date, we arranged our second date – taking his dog for a walk, on our third date we went to a pub. Then that was it – we were together.' 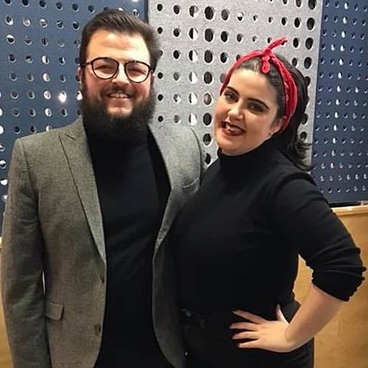 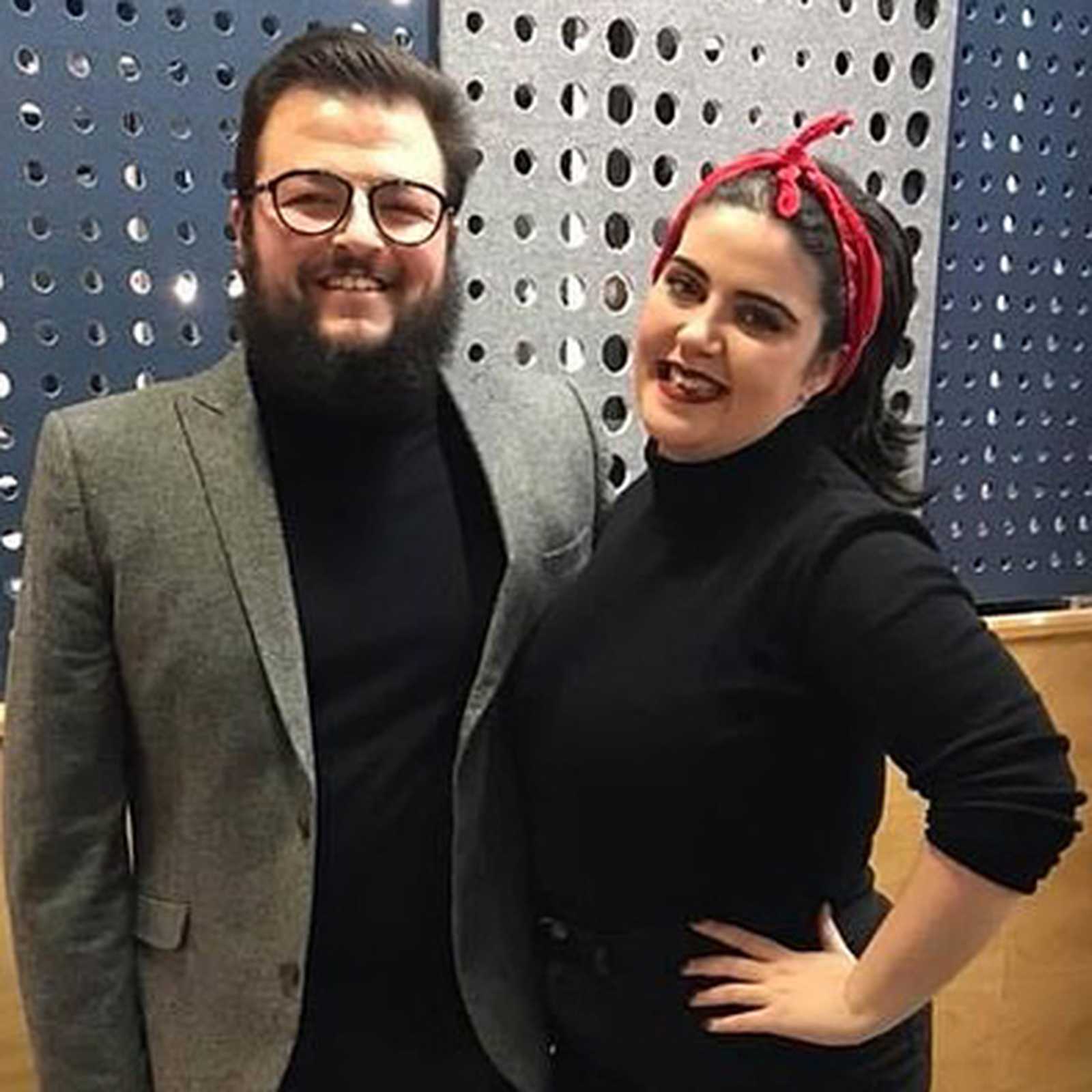 Jen McCrea, pictured with her partner Callum Daly, was diagnosed with an incurable brain tumour at 15 and feared she would never find love 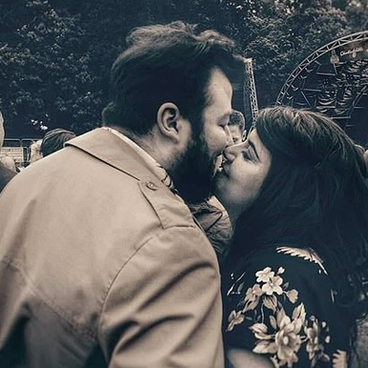 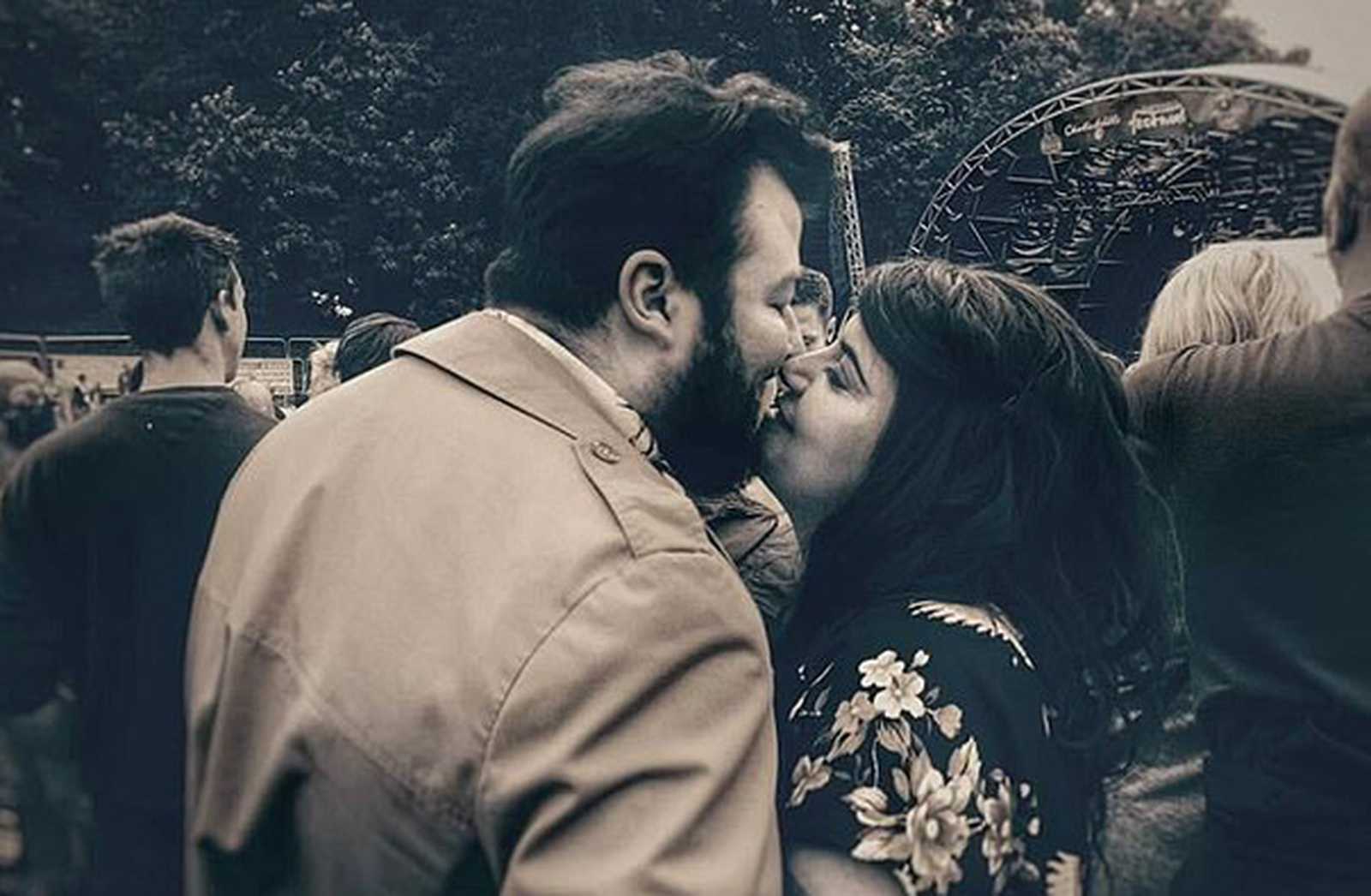 Callum goes with Jen, pictured after they first said I love you at a Human League concert, for her hospital appointments and the couple go out after so they don't worry about results 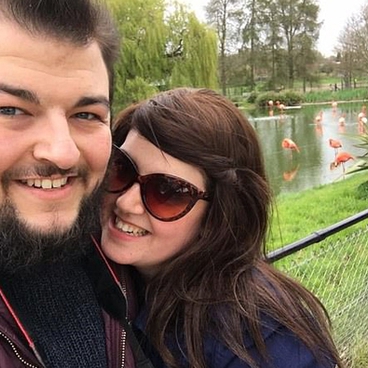 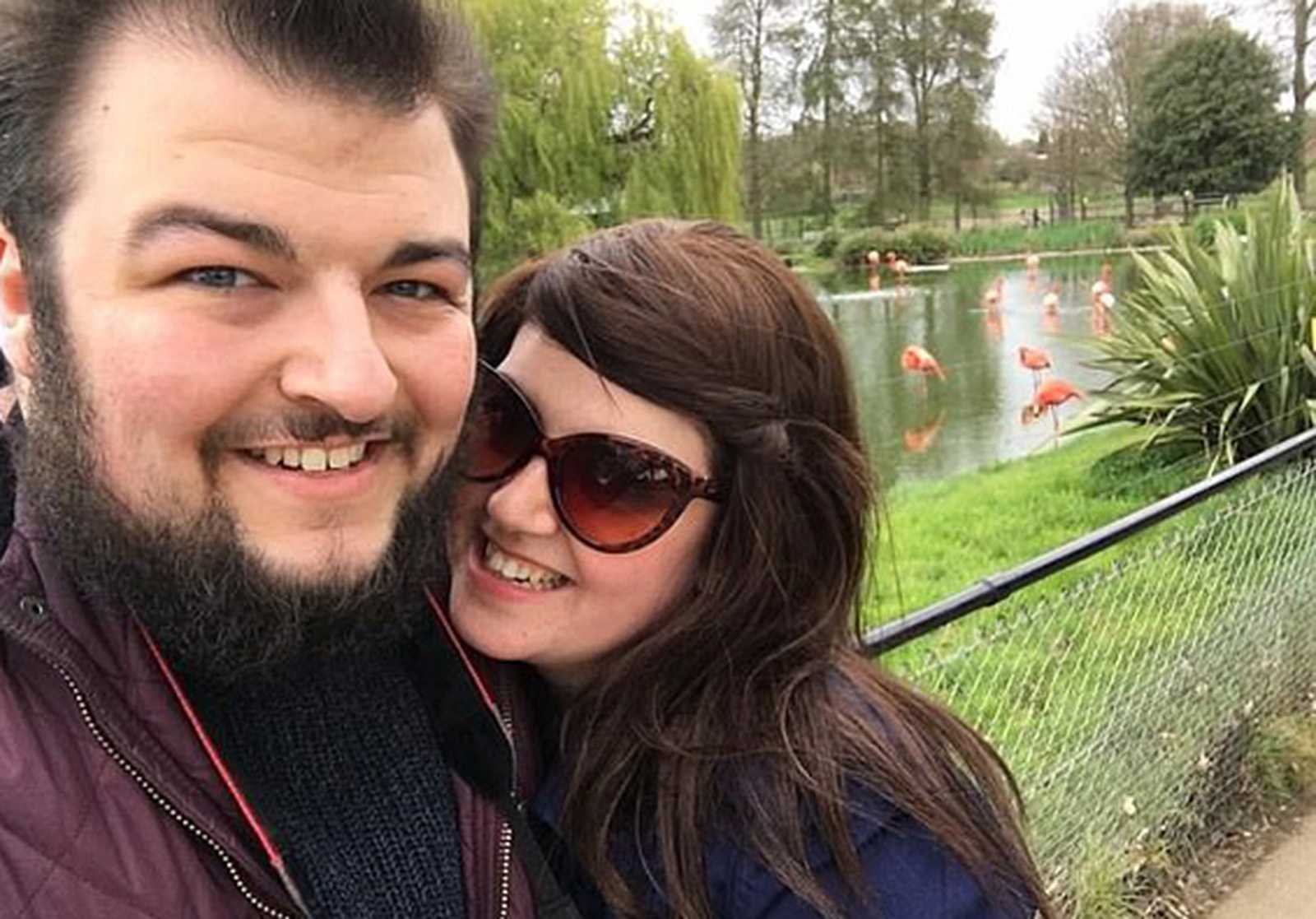 Jen and Callum, pictured together, are planning for the future and would like to get married

Right from the beginning, Callum transformed how Jen thought of herself.

She said: 'I hated the way I looked at my heaviest and had gone from a size 12 to a size 20, although I was down to a size 18 when I met Callum.

'But he told me how beautiful I was whatever my size and that he loved me for me.'

Six months after they met, they told each other they loved each other at a Human League concert, creating a funny as well as a romantic memory.

Jen explained: 'The music was really loud and Callum said "I love…" and I butted in blurting out "I love you, too!" said Jen.

'Then he told me he was going to say he loved that song, but quickly said he loved me too.'

Callum helped Jen get fit enough and overcome her fatigue to achieve her ambition of doing the Iceland Trek in July 2017 to raise money for the fund she set up with The Brain Tumour Charity, which has so far raised over 10K.

Jen, who is now a size 14 and 12st 8lbs, said: 'It's brilliant seeing my waistline again and feeling happier with my figure. But what gives me most confidence is that Callum loves me whatever size I am.' 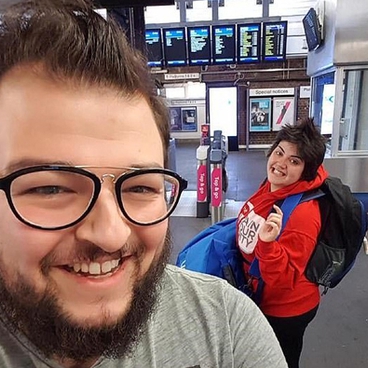 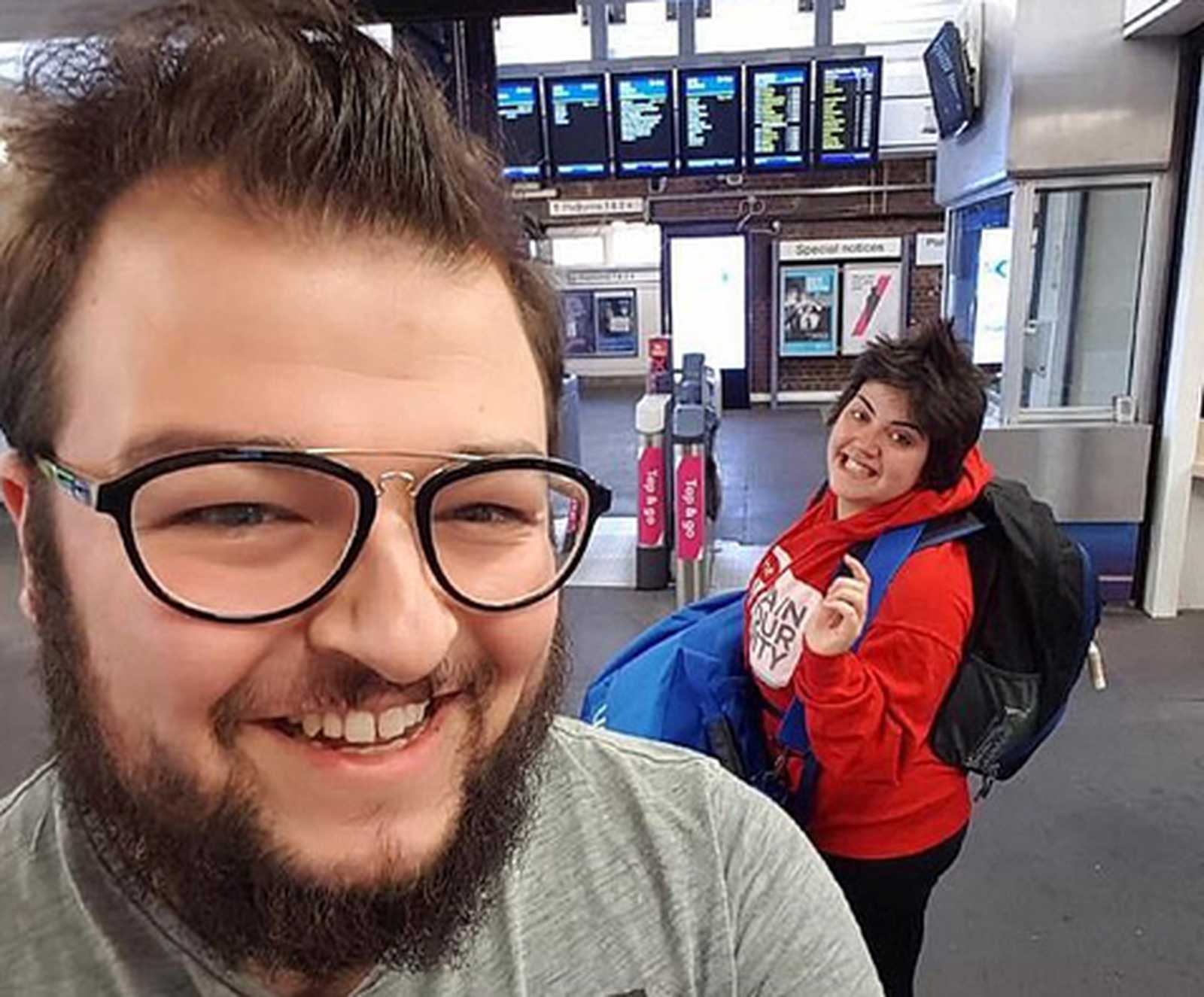 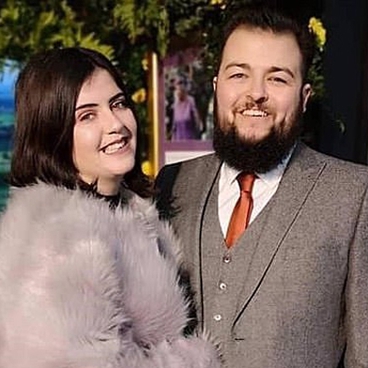 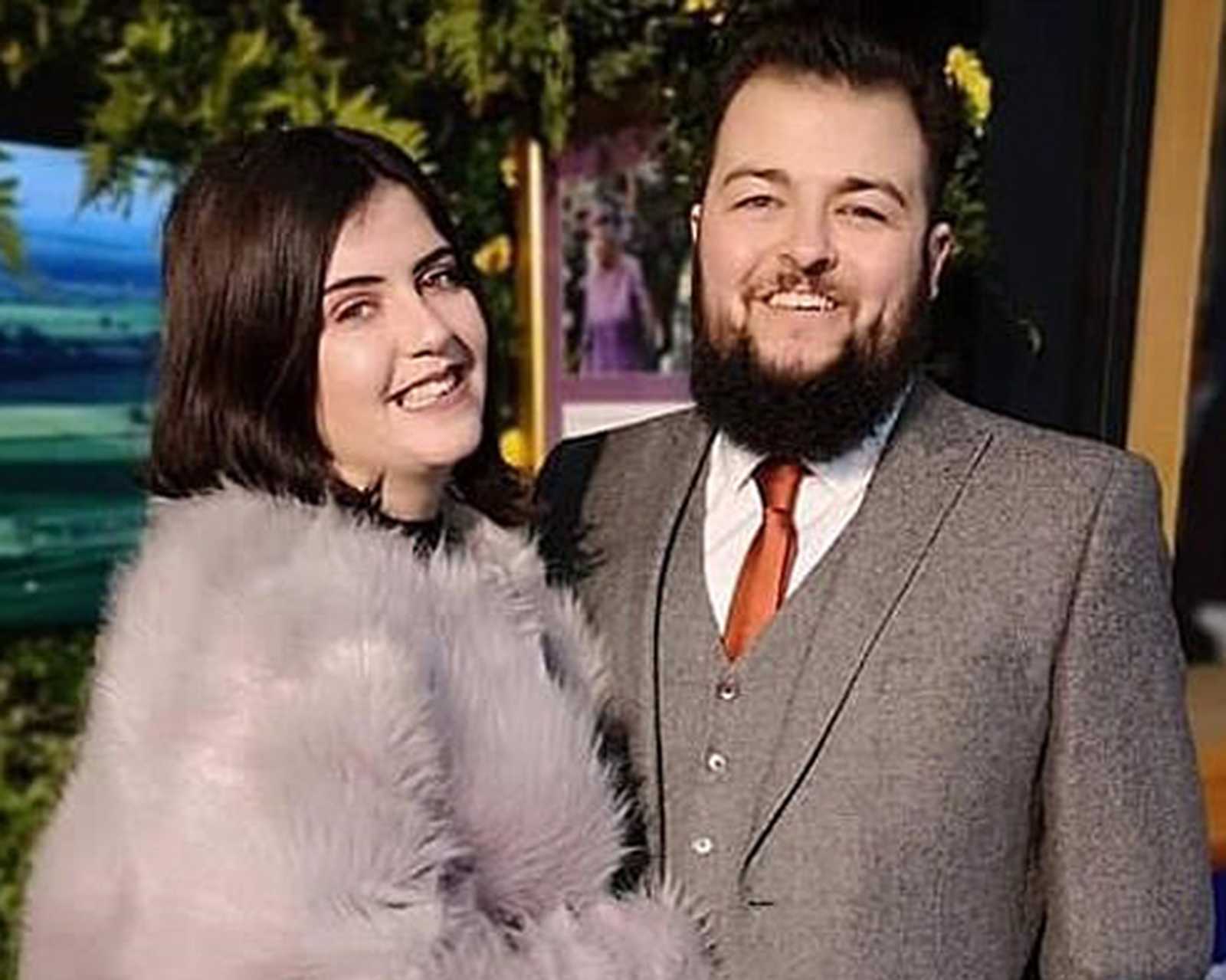 Jen, pictured with Callum at Ascot, said she sees a 'hopeful future' for them together

'That realisation feels like true freedom as a woman - that I can feel love for a body that had nearly killed me -something I never dreamed would be possible again.'

And Jen's relationship reframes how she deals with appointments and waiting for results from scans, now twice a year.

Jen said: 'Callum comes with me when he can to brighten hospital days. He sits in on MRI scans, chats to distract me and takes me out after appointments so we have fun instead of me worrying about my results.

'I can talk to Callum about anything and he's so understanding. I have absence seizures and he'll just gently put his hand on my knee and reassure me when I come out of them.'

The couple are now saving up for their own home and say marriage is not a case of 'if' but of 'when.'

Jen said: 'Some people have commented it's not fair to even think about marriage and having children with Callum – because I may not be around to see them grow up.

'Of course we face challenges – at one point a year ago when doctors wanted to put me on chemotherapy due to my seizures, he broke down in tears and I hated that he was frightened.

'But we talk about everything and both agree we've got to live our lives and not put our dreams and plans on hold.'

'I've had brilliant support from the charity, which inspired me to set up my fund,' she said.

'It's vital to raise money for more research through the Big Bandana Bake campaign and raise awareness of children and teenagers' brain tumour symptoms.

'I want to do everything I can to help save other people what I've been through and the long-term effects of living with a brain tumour.'

She said: 'In the past, I would wake up with no purpose to my day but to survive and to hope and pray that my tumour wouldn't spread any further through my brain.

'Now I am a cancer patient and I am in a relationship - the two are not exclusive of each other, but Callum's love has made me feel more like the woman I'd dreamed of growing up to be.'

After 2 years of being dismissed as a hormonal and stroppy teenager Jen was diagnosed with a brain tumour in 2010. She has since had treatments and surgeries that left her feeling "very low in herself".

In this video Jen discusses how meeting her boyfriend (Callum), has made her feel like a woman again and not just a brain tumour patient.

Callum said: 'I wasn't fazed when Jen told me she had a brain tumour. When we met, the first thing I noticed about her were her beautiful smile and gorgeous eyes.

'I'm in love with Jen – the whole person. Of course when she has scans and knockbacks, it's upsetting and very stressful, but she's worth it and we make the most of every moment together.

'And knowing she feels the same way about me has boosted my confidence, too. Life is good with Jen in it and I've never been so happy – I'm excited about our future.' 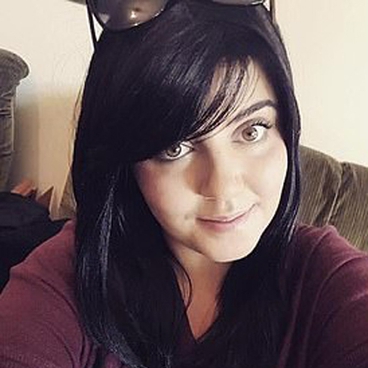 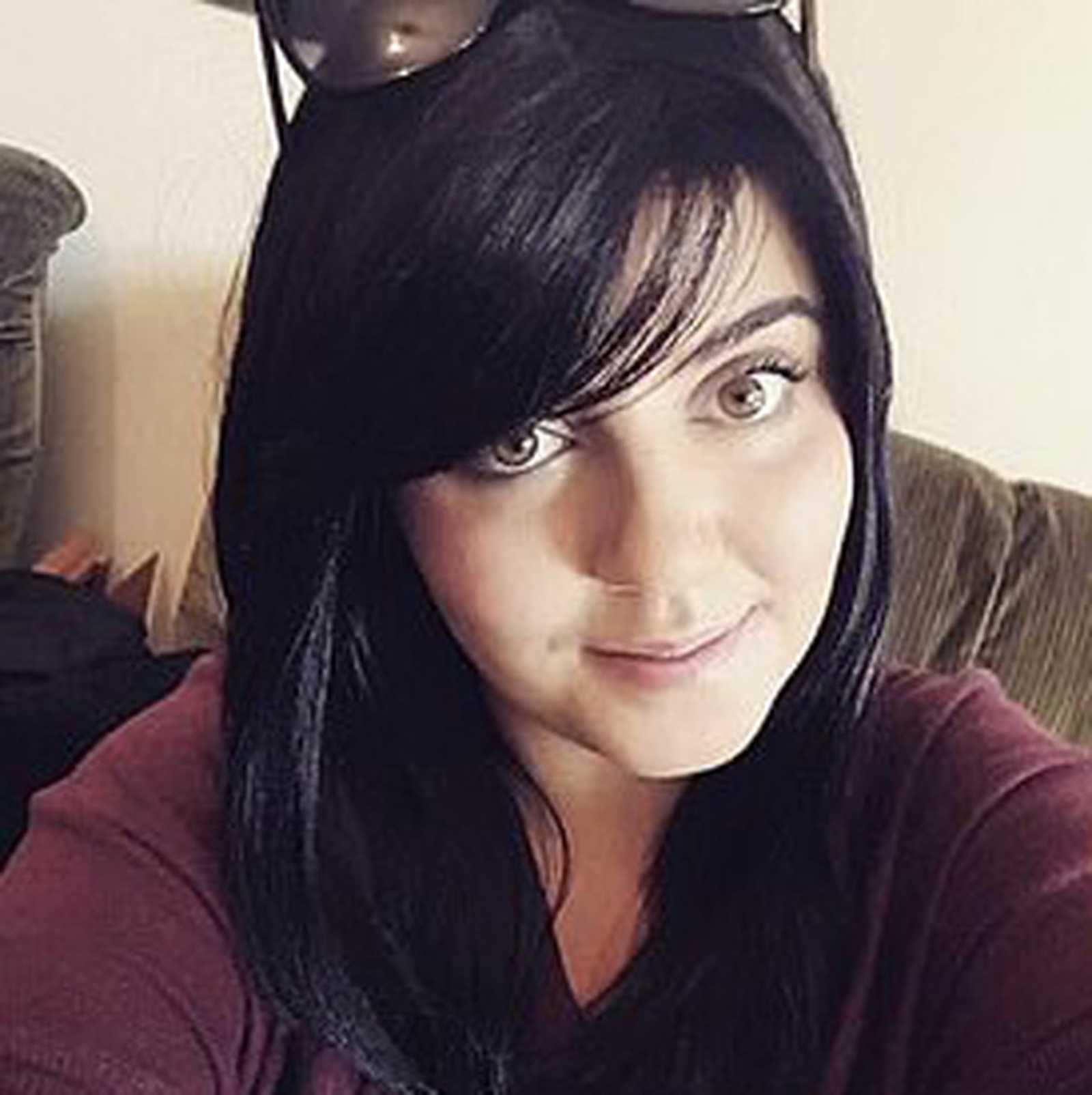 When Callum asked why Jen wore wigs, she was honest and told him about her tumour 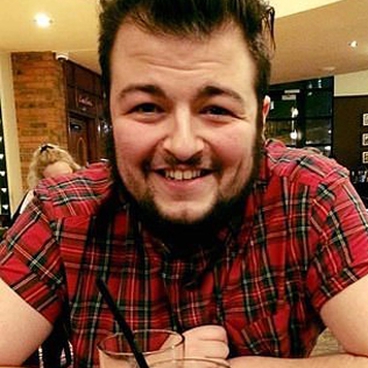 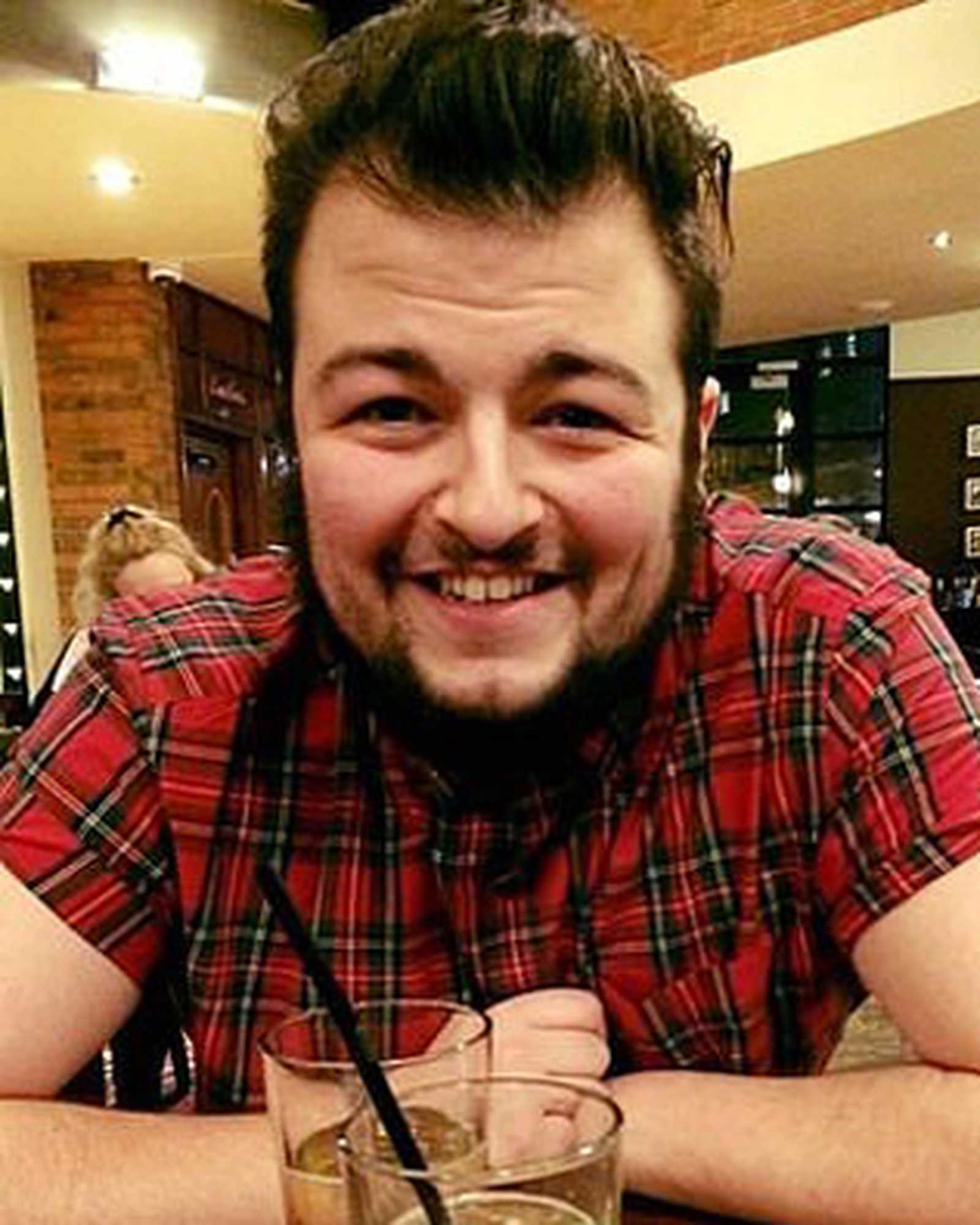 Jen said she thought Callumn's red shirt, pictured, was cute and that he was kind at their first meet 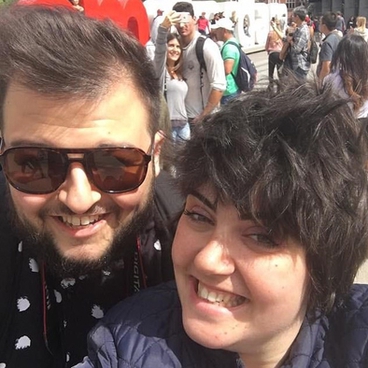 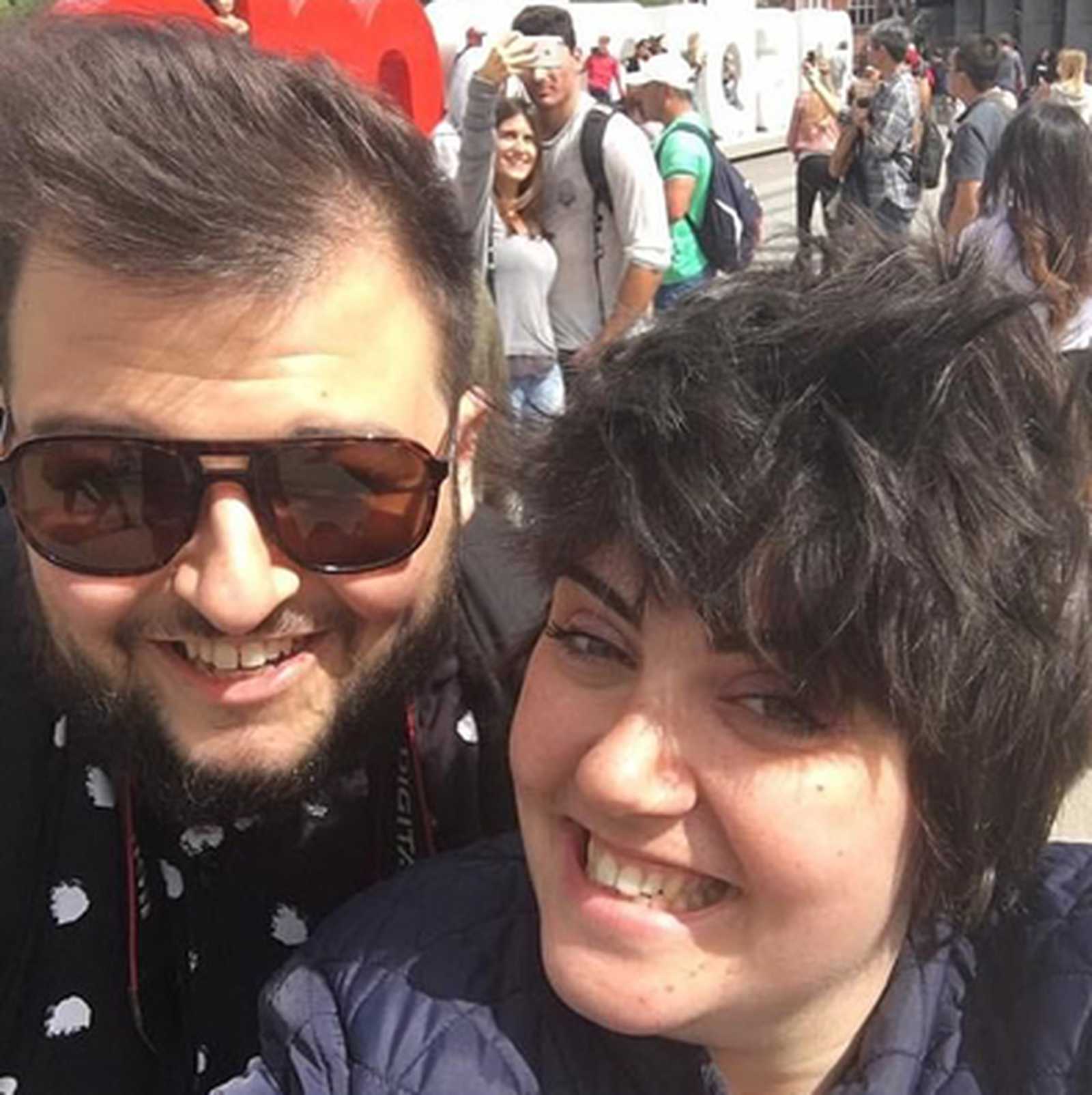 Jen said her confidence grew again after she met Callum, pictured together, and they are planning to move in together once they've saved up the money for a house

Sarah Lindsell, The Brain Tumour Charity's chief executive, said: 'Jen and Callum's story has touched everyone at the charity.

'We hear again and again about people's feelings of isolation, triggered by the physical and emotional impact of a brain tumour diagnosis and treatment.

'Like Jen, almost 11,500 people a year – that's 31 a day – will be diagnosed with a primary brain tumour. She's a brilliant ambassador for the charity and an inspiration to us all.

'We're so grateful that she and Callum are sharing their story during Brain Tumour Awareness Month to support our Big Bandana Bake campaign to raise money and awareness. And we wish them every happiness together.'