Home » News » “We could live again, albeit a different type of life,” says wife after husband’s diagnosis.

It was back in 2012 that Nick Thomas from Winchester, who was 41-years-old at the time, had a grand mal seizure which led to his shock diagnosis of a brain tumour.

Prior to this seizure, Nick’s wife, Diane, on reflection, had noticed some subtle changes in Nick’s personality including a lack of empathy, a shorter temper than usual and lacking his usual ‘filter’ in what would be the right or wrong thing to say. He did also have a ‘funny turn’ whilst working from home a few months before his diagnosis which they had dismissed as stress at the time.

Then in January, Diane had just returned home from work and, after a brief chat with Nick, they both went to change out of their work clothes. She soon heard a loud growl and a low guttural sound as Nick was having his first seizure, He was unconscious and hard to control but she was able to sit him up, propped with pillows, and call 999.

A CT scan later that night revealed that Nick had a mass on the frontal lobe of his brain which was confirmed as a Grade 2 oligoastrocytoma after a biopsy was carried out a few weeks later.

An MRI scan and various appointments with neurologists, oncologists and a brain surgeon followed to confirm that Nick’s brain tumour was inoperable as it had formed tendrils around his brain rather than a solid lump. Nick was also diagnosed with Epilepsy and given medication to help control any seizures. It took a bit of trial and error to find the right one and, during that time, Nick had two petit mal seizures. He continued to have minor ones even whilst taking the best medication available for him.

Nick had a course of chemotherapy, which was sadly unsuccessful. The oncologist said that this was likely to be because the medication couldn’t cross the blood-brain barrier. This was followed by six weeks of daily radiotherapy which did thankfully significantly shrink the tumour and it remained stable for around five years.

Following Nick’s successful radiotherapy, Nick and Diane decided to indulge in their love of travel. As Diane had worked for a cruise line, they had previously been all over Europe and America together including visiting the Kennedy Space Centre in Florida where Nick could indulge in his passion for space travel. They also enjoyed a memorable trip sailing from New York back to the UK on the QM2. Early on in their relationship whilst Diane was working in Hawaii, Nick had flown out to Honolulu to propose to her.

Nick and Diane on holiday. 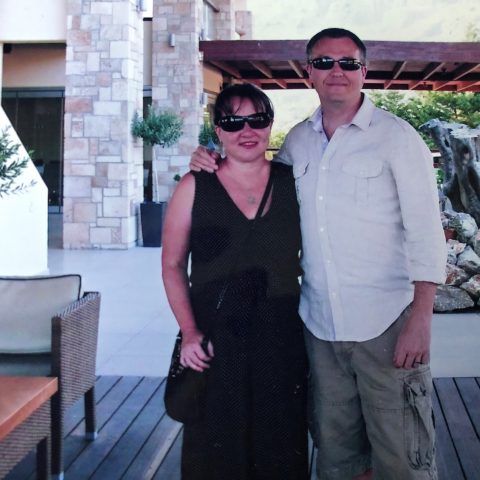 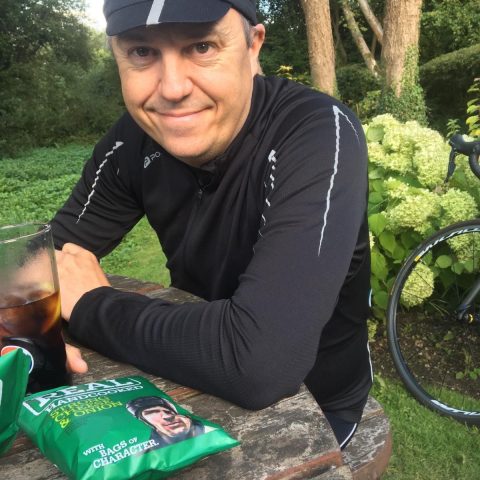 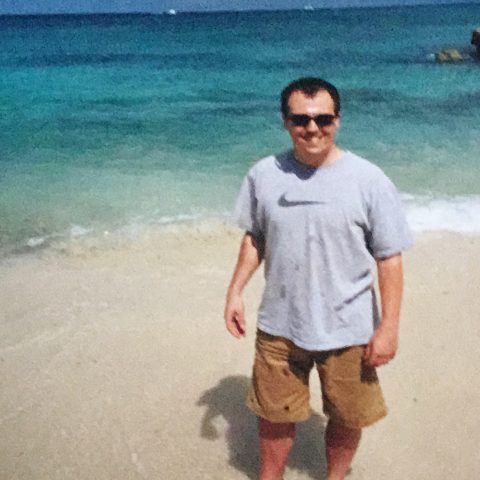 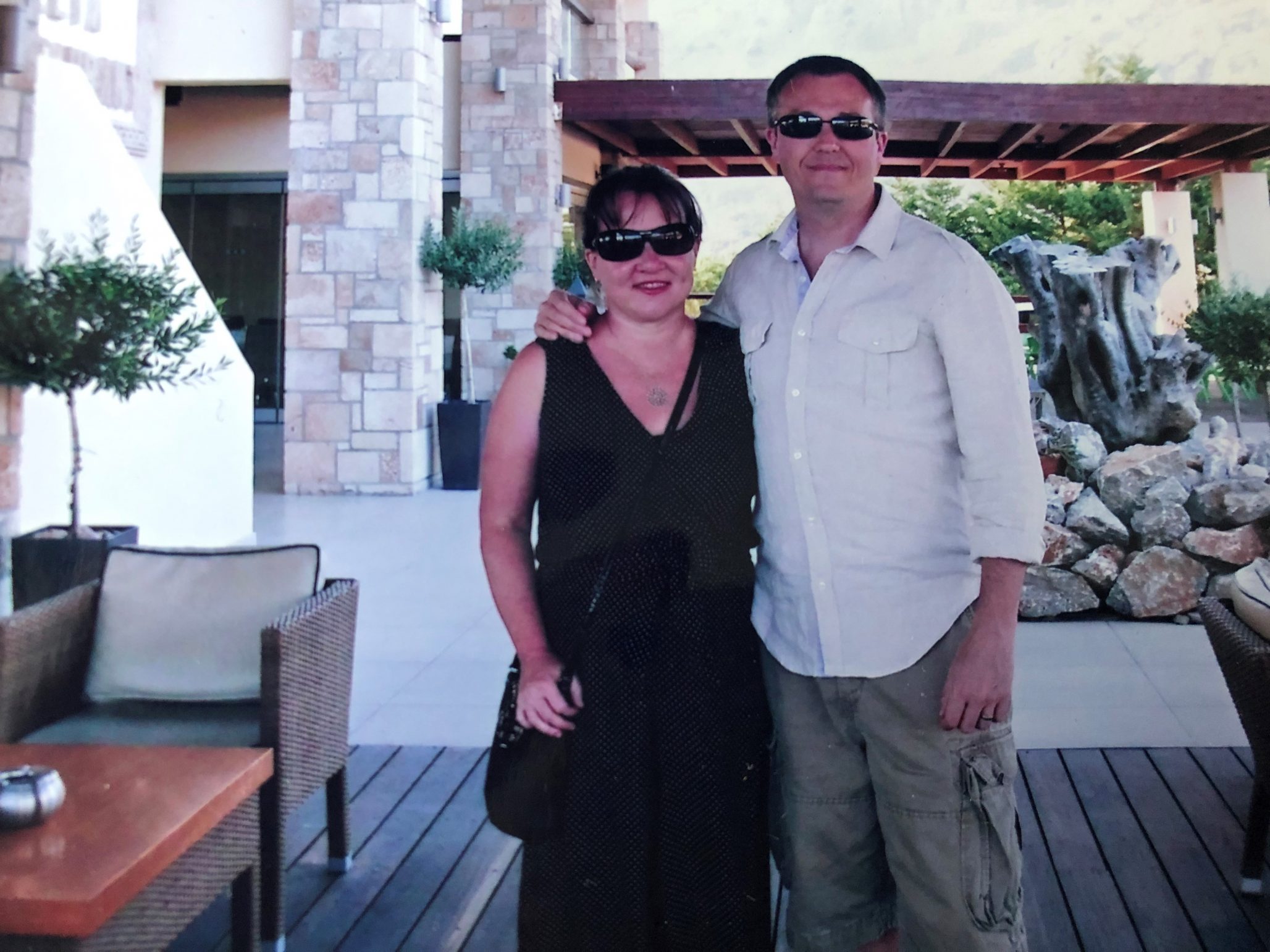 The couple enjoyed a trip to Rhodes just months before Nick’s seizure. 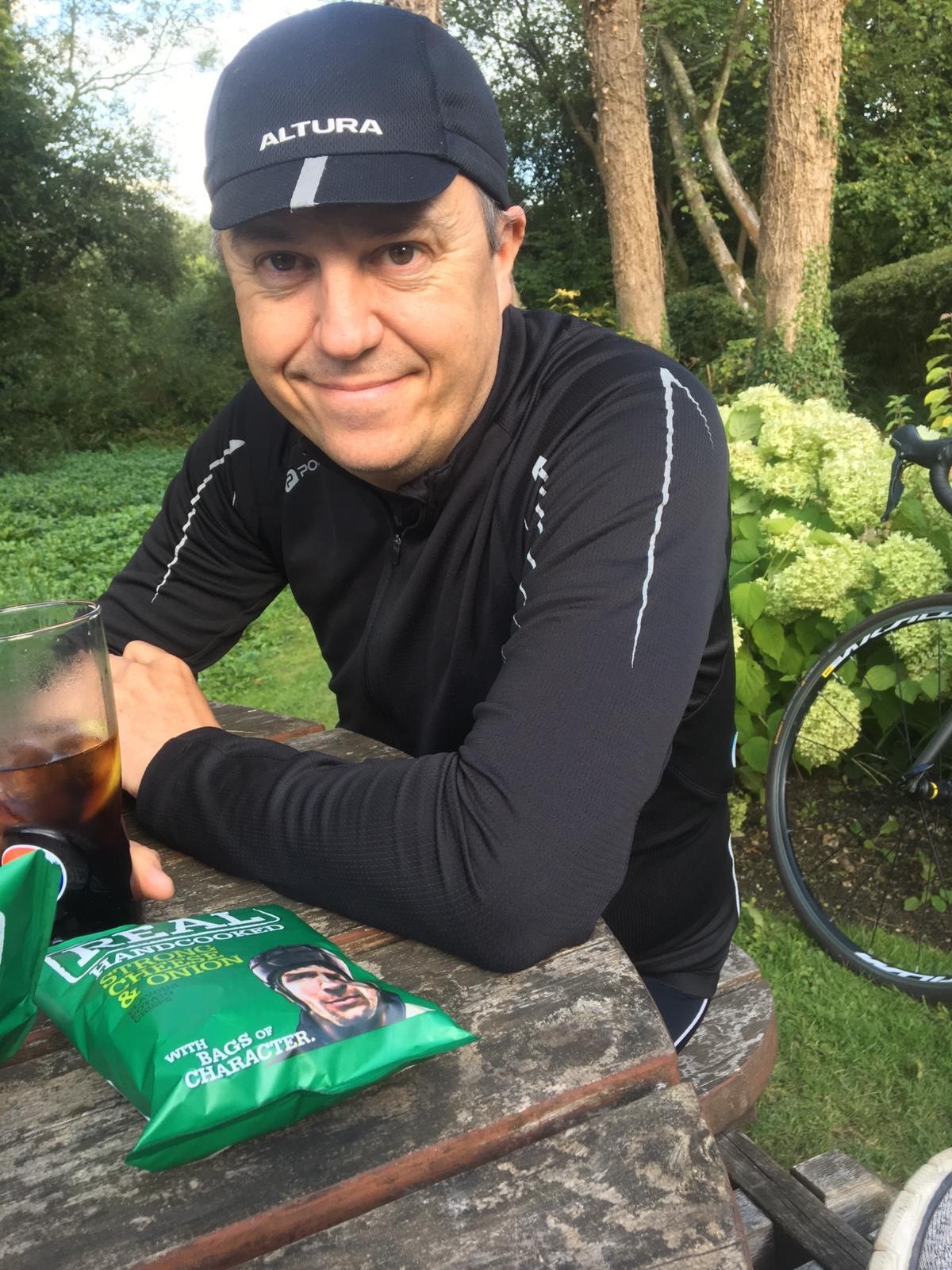 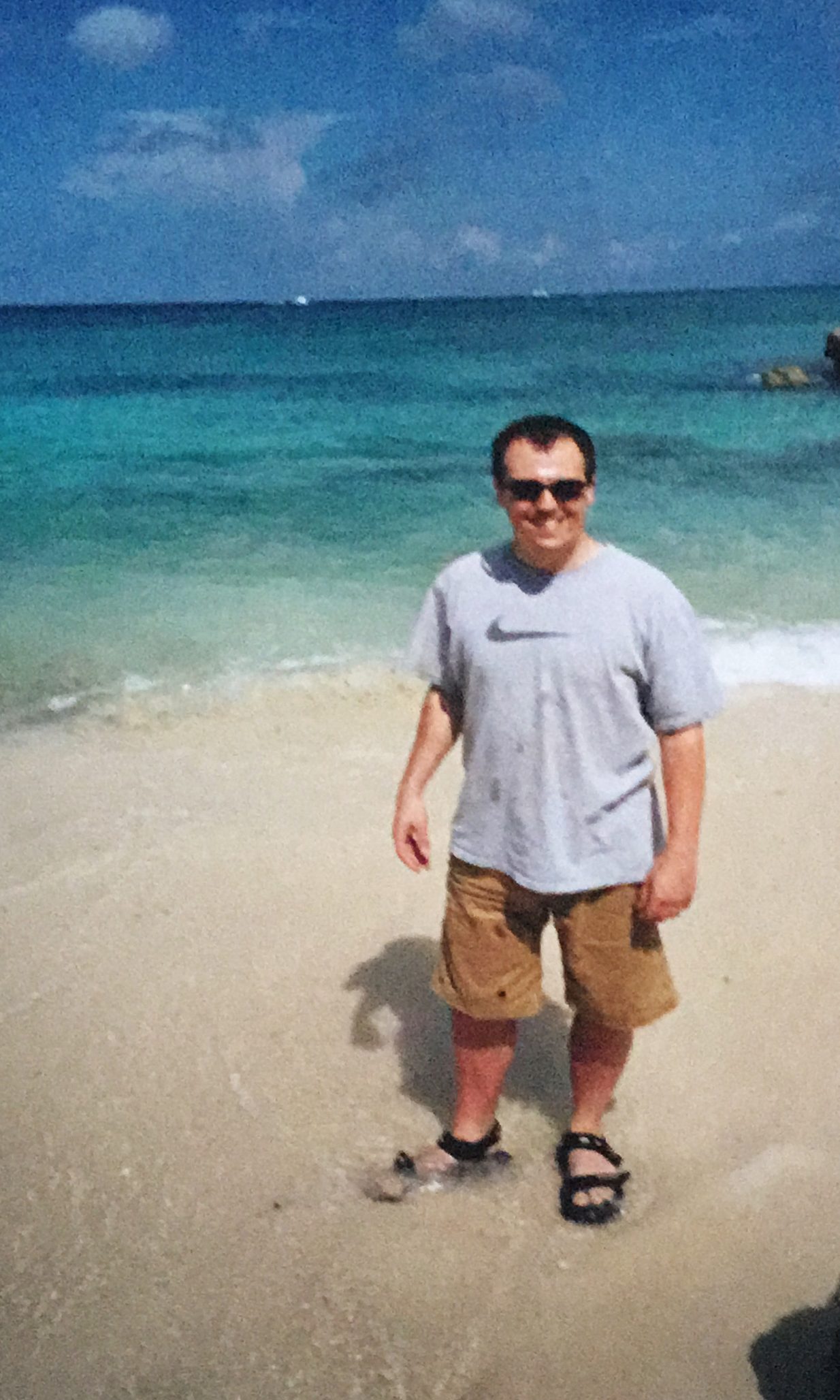 The couple enjoyed many adventures overseas throughout their time together.

Following Nick’s diagnosis, they went on two unforgettable holidays sailing around the Norwegian Fjords to cycle, kayak and walk on a glacier as well as taking the Eurostar to Marseille and two breaks in Majorca, flying from quieter airports to minimize the risk of Nick having a seizure.

As an avid cyclist, Nick had been to see the final stage of the Tour de France in 2010 for his 40th birthday and, after his diagnosis, he would still enjoy putting himself through the paces and cycling around 20 miles in the hilly Hampshire countryside a few times a week, as well as a cycling trip whilst in Majorca – and never having a seizure whilst doing so.

Diane said: “At the beginning of our relationship, life was fun and exciting and we knew that we had a long and happy future ahead of us. During those five years after Nick’s diagnosis, we could live again albeit a different type of life around dealing with hospital visits and the effects of Nick’s Epilepsy. It felt almost back to normal – we were determined not to be confined by Nick’s illness.

“We couldn’t travel a lot overseas and a long-haul flight was out of the question because of the risk of a seizure and also the cost of travel insurance. Home life was much quieter too but we were lucky to have great and sociable neighbours so, pre-dinner drinks in our house became a regular weekend fixture.

“It was so important to us to make the most of the time we had together – we were determined to create a ‘new normal’ for the two of us.”

After his first seizure, Nick left his job as a project manager for a local council and took a few courses instead including graphic design, photography, bicycle maintenance and he also taught himself website design, which led to some paid work.

Diane said: “We both knew that it was important to have a passion or a hobby or to discover a new one. Nick’s courses and the small jobs of work which came from them were a big confidence boost for him – he could sit for hours in our bright conservatory overlooking the garden, dabble on the PC working at his own pace and playing his favourite music in the background.”

It wasn’t until 2018 when Nick’s health sadly took another turn for the worse and he had a seizure whilst on a train to visit Diane’s sister in York. They went to A&E at York Hospital where the consultant feared that the brain tumour had progressed. Nick was referred for more scans but the results were inconclusive due to uncertainty over whether they showed regrowth or inflammation, which can result from a seizure.

As radiotherapy was no longer an option due to its significant risks, Nick had another course of chemotherapy which was his only treatment option. Sadly, this was once again unsuccessful.

Yet, in October 2019, they got the news which they had been dreading – Nick’s low-grade tumour was now aggressive, high-grade and his prognosis was terminal – although Diane and Nick didn’t want to put a time frame on this. He had two further rounds of chemotherapy which continued for an hour each month throughout January and February, before it became clear they were also unsuccessful so treatment was stopped.

As the global pandemic unfolded, Diane nursed Nick at home as he gradually lost the use of his arms, legs and speech, as well as developing incontinence and losing the ability to swallow.

Around the permitted Covid restrictions, Diane’s sister Carol travelled from York to help and support for the five weeks which sadly led up to Nick’s death in September. His final days were difficult, Diane said, as he gradually declined over time yet his physical strength kept him going for as long as possible.

Lockdown had a huge impact on their experience as Covid meant all medical services were paused or over-stretched and, should they have required it, hospice care wasn’t an option. Nick also developed many other conditions including DVT, a chest infection and shingles during the pandemic but he got through them, largely due to his age and overall fitness. The tumour also caused him to have a psychotic episode and Diane had to call an ambulance for help.

Diane said: “Most of all, I just needed a hug. But there was nobody who could do that. I don’t have any family in the area so I was often alone with a terminally ill husband. It has been a long and difficult journey following Nick’s diagnosis.

“I was lonely, sad and angry and I continue to be – grief isn’t linear – it is disjointed and chaotic – so some days are better than others. Some days I feel normal and I have fun but, on other days, a huge weight pulls me back into a hole of grief.

“Nick was my soulmate. From the first moment we met in the classroom studying journalism and creative writing, I knew he was ‘the one’ – my heart just leapt when I saw him. He was intelligent, kind, funny, handsome and sporty – he was everything to me.

“I have had several months to reflect on our personal journey – my message is simple even if the diagnosis isn’t – you can live with a brain tumour and not let it rule your life. A brain tumour diagnosis is brutal and frightening but you can still live your life. We are all wonderfully unique and people with the same diagnoses can end up with very different prognoses.

“So, grab life with both hands, seek out friends, family and support groups to help enable you to live your ‘new’ life and follow your passions or create new ones. We did.”

Diane first heard about The Brain Tumour Charity on social media and she has shared her story as a cathartic way of helping her with the loss of Nick.

She added: “Clearly, more research and better treatment options are desperately needed for people who have been diagnosed with a brain tumour. Nick only had one option – radiotherapy – and once that was given and the tumour started to grow again, his time was ultimately limited.”

Our information pack is full of information, advice and offers of support whether you have been affected by your own diagnosis or that of a loved one.