In early 2014 our son William was found to have a high grade brain tumour. After over two years of conventional treatment, including chemo, radiotherapy and surgery we were told that there was no more the NHS could do for William. We then started him on Cannabidiol and a Ketogenic Diet and his tumour went on to shrink by two thirds and was stable for two years before starting to grow again in early 2019.

As well as the more common symptoms, we noticed William walking around with his head tilted to one side. Given William’s age at the time and having recently started nursery, the assumption that William was just going through the standard run of sickness and teething was made by both ourselves and our local GP service. After repeated visits to the GP William was eventually referred to Eye, Ear, Nose & Throat (EENT) although, thanks to his mother’s conviction that there was more going on, we decided to take William to the local Accident & Emergency department after William was sick one night, again for no apparent reason.

After a few days in the hospital of continuing to try and persuade everyone who would listen that there was something more seriously wrong with William, we eventually managed to persuade them to carry out an MRI scan once the EENT department could find nothing wrong with him. It was then that we received the utterly devastating news that William had a tumour approximately size of a golf ball near to the centre of his brain. In the next few days the tumour was diagnosed as a Grade 3 Anaplastic Ependymoma of the Fourth Ventricle.

Within days William was taken into surgery and thanks to the brilliant work of a surgeon at Queens Medical Centre, Nottingham, the tumour was removed. Due to the location of the tumour, William was left with partial paralysis to the left hand side of his face which meant that in addition to not being able to move the side of his face, he had to be tube fed due to not being able to properly swallow.

William started a 13 month course of chemotherapy involving four main drugs administered every two weeks, each involving various lengths of hospital stays. Unfortunately William was not able to sustain his tolerance of this treatment and coupled with the fact that he was found to be deaf in his left side (likely due from the surgery) and began to lose high tone hearing in his right side (likely due to the chemotherapy) the decision was made to stop treatment after 9 months.

In the months preceeding August of 2015 after several clear scans we began to notice a deterioration in William’s balance. Although he had been unsteady on his feet since the first operation, his next scan was brought forward and the tumour was found to have re-grown.

Due to where the tumour was found this time we were told that the operation would be more complicated than the first. Having initially been told by the surgeon that he thought half of it had been removed, the scan showed that in fact he had removed most of it. Our joy was tempered by the fact that William could not be extubated (taken off ventilation) since his cough had been compromised by the surgery. After a week on heavy sedation in intensive care he had to have a tracheostomy fitted before he could be weaned off the sedation and we could find out what other complications the surgery had left him with. 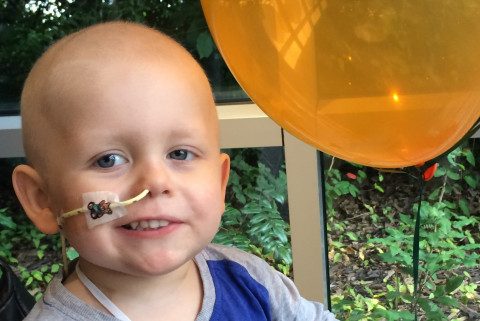 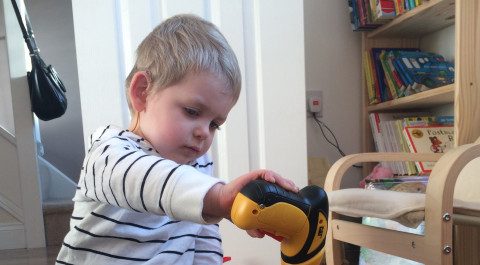 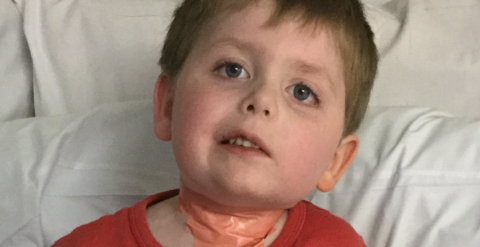 To our then delight we were told that William would be considered for Proton Beam Therapy in America. Although the NHS approved funding, we were told that the centre in America had refused to treat him due to the fact that he had a tracheostomy and the complications that would likely result from travelling by air to America.

Although we tried everything in our power to get Proton Beam Therapy in Europe, a MRI scan showed that in the month since the surgery the tumour had grown to become larger than it was prior to the surgery. We then had no other option than to settle for radiotherapy in the UK since starting treatment sooner was more important than the type of radiotherapy given the rate the tumour had grown back at.

In October 2015 William stated a 6 week course of Radiotherapy at City Hospital using the Tomotherapy machine which is better able to direct treatment to the tumour than with a conventional radiotherapy machine. We were warned from the start that there was a significant chance that the side effects of the radiotherapy may mean gaps in his treatment. Although sickness was a constant issue, an adaptive mix of medications meant that it did not result in any delays to his treatment.

In early 2016 the tumour was found to be increasing in size, despite going through another round of chemotherapy. We were told that there were no other treatment options available although they said that William’s tumour had the correct enzymatic profile for the Ketogenic Diet to possibly have an effect. At this point we decided to seek treatments outside of the NHS and came across Cannabidiol (CBD) and a private clinic which was able to offer a synthetic version. We also started William on a Ketogenic Diet.

Six months after being told there was nothing more that could be done for William, as opposed to noticing a continuing deterioration, we noticed an improvement in his condition. The decision was quickly made to carry out a MRI scan whereupon his tumour was found to have shrunk by pretty much two thirds. In early 2017 William had improved to the point whereby the specialists thought it would be appropriate for his tracheostomy to be removed. It would probably even be possible to remove the feeding tube to his stomach if it were not for the fact that it would not otherwise be possible to keep him as strictly adherent to the Ketogenic Diet without it.

In late 2018 William’s tumour was found to have grown slightly. Three months later the tumour growth was found to be significant. However, since it had been such a long time since his previous surgery and given where tumour was now located, it was agreed that he would be eligible for surgery.

Although the surgery went well, not quite all of the tumour could be removed hence the only ‘curative’ approach, radiotherapy, was deemed to be too risky. The tumour was sent away for analysis such that any appropriate treatments can be considered – something that wasn’t standard practice after his last operation. In the meantime we have started him on chemotherapy and are continuing with Cannabinoids and the Ketogenic Diet.