Scans provide a detailed 3D image of the brain by taking multiple pictures of the inside of your head.

Scans are used during diagnosis or motitoring your tumour during and after treatment. They allow doctors to see whether there is a tumour and, if there is, its size and position.

What are diagnostic scans?

Before having a scan

What is a scan?

There are various types of scan that can produce a 3D image of the inside of your head, including your brain.

The two types of scan that are most commonly used are:

CT stands for Computerised Tomography. You may also sometimes hear doctors referring to CT scans as CAT scans - these are the same thing.

CT scanners use x-rays to take several cross-sectional pictures through your head, then use a computer to stack these 2D picture 'slices' into a 3D image.

Magnetic Resonance Imaging, or MRI, uses magnetic fields, rather than x-rays. MRI scanners take pictures from several angles around your head, then build these into a 3D image.

There are some other types of scan that may be used to diagnose a brain tumour, or to find out more about a diagnosed tumour. These include:

Waiting to have a scan or for the results can be an anxious time. Use BRIAN’s quality-of-life tracker to record how you’re feeling each day, so you can work out when you start getting anxious and try coping techniques or get support before it happens. 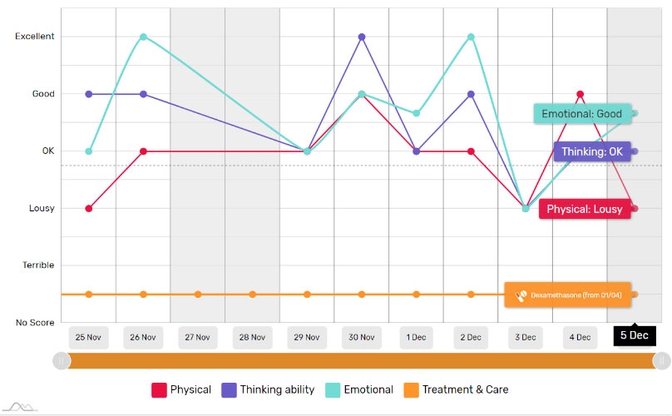 You’ll need to take off anything metal, e.g. glasses, earrings, hairclips, that may interfere with the scan. Fillings in your teeth and braces are fine, but tell your radiographer about them.

If you’re having an MRI scan, you’ll be asked if you have:

If you have, then an MRI may not be suitable for you, as it uses magnetic fields to take images. Your radiographer will be able to tell you more.

For both types of scan, you may be given a fluid called a contrast medium. Usually given via an injection (but sometimes as a drink), it helps to get a clearer image from the scan.

Depending on which contrast medium is used, it may make you feel warm all over, though some people feel cold. Or you may think that you’re passing urine, but you’re not.

For some people, the thought of having a scan can cause fear and anxiety – either about:

Our Brain Tumour Information Pack can help you better understand your diagnosis and feel confident talking to your medical team.

The procedure for both CT and MRI scans is very similar.

You’ll probably be given headphones, particularly for an MRI scan. You can usually take music to play through the headphones.

If you tend to get claustrophobic, it’s a good idea to let staff know before the day of your scan. You can have a friend or relative with you if you’re nervous. Or the staff may be able to give you a sedative to calm you.

Once the staff have got you in the right position, they’ll leave the room, but will be nearby. They can see, hear and talk to you, and you can hear and talk to them. They’ll tell you what will happen.

During the scan, you need to lie very still, so you shouldn’t talk while the actual scan is happening. You may be given a button to hold, which you can press if you need to stop the scan for any reason. But this will mean the scan has to start from the beginning again.

You can breathe normally during the scan.

The scan isn’t painful, nor will the scanner touch you. But, during the scan, you’ll hear noises from the scanner when it’s taking pictures:

What happens in a CT scan?

What happens in an MRI?

After the scan, you’ll usually be allowed to go straight home. If you’ve needed a sedative to calm you, the hospital staff will first check that it’s safe for you to leave. You should arrange for a friend or relative to accompany you and take you home afterwards.

You should be told when you’ll get your test results.

Is it better to have a CT or an MRI scan?

Neither scan is better than the other. It’s more a question of which scan is best suited to meet the needs of the person with a brain tumour.

MRI scans and CT scans are similar. Both build up detailed images of the brain. However, there are a few differences:

How longs do scans take?

Your whole appointment will take quite a bit longer than the scan itself, as time will be spent getting you into the right position in the scanner.

For MRI scans, time will also be spent explaining the scan and going through the safety questionnaire with you.

For the scan itself:

How long will I have to wait for the results?

How long this takes will vary.

Scan results can take up to a week, as your doctors may need to first discuss your scan with other members of the medical team at their weekly Multi-Disciplinary Team (MDT) meeting.

Though CT scans use radiation, it’s kept at a very low dose and they’re only used when they’re considered necessary, with the benefits outweighing the risks.

MRI scans are completely safe. There are no risks associated with them and they don’t expose your brain to radiation. However, they aren’t suitable for some people who have metal in their body (for example, skull plates).

Very rarely, the contrast medium can affect the kidneys, particularly if your kidneys aren’t working properly. So it’s important to tell you medical team if you have any kidney problems.

Find out more about Diagnostic Scans in the full fact sheet.

Learn more about how to cope when feeling anxious about upcoming scans or while waiting for results.