Employment after a brain tumour diagnosis

Receiving a brain tumour diagnosis is a life-changing event that often has a far-reaching effect on your ability to stay in employment or find a job in the future.

You might need to take a significant amount of time off work for appointments, treatment and recovery. It can also be much harder to work in the same way as before because of side-effects caused by the tumour or its treatment – for example, unmanageable fatigue or cognitive difficulties.

Have you had to reduce your working hours or give up work completely?

If you’re feeling fed-up, frustrated or depressed that you can no longer work as you used to, use BRIAN’s quality-of-life tracker to record how you’re feeling each day and use this to open up conversations with your loved ones and your healthcare team.

Many people have to give up work entirely, change jobs, or reduce their hours or duties. If a partner is acting as a carer, their work may be affected too. As a result, financial difficulties are common for families affected by a brain tumour.

It’s completely normal to worry about the potential financial impact of your diagnosis or feel anxious about how your employer will react to the situation. Many people in our community also speak about the loss of identity and purpose that work can provide.

Simply being aware of your employment rights can help you feel less anxious about the situation. The resources below have been developed to help you understand your rights and make sure you: 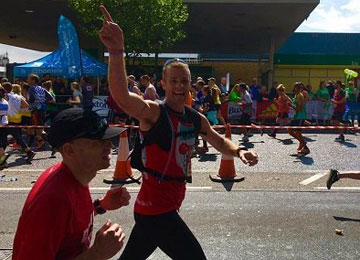 Mark Grimes, diagnosed with a brain tumour in 2015

“In February 2015, I was diagnosed with a brain tumour, following symptoms for six months or so. I underwent an awake craniotomy in April 2015.

“I work in the fire service, which was always my childhood dream job, but on receiving my diagnosis I was told I had to stop working in my current role and placed into an alternative office-based role. This was hard as it was the complete opposite of why I initially joined the service.

“Following my second surgery, and with a new management team, I’ve remained on full pay up until now. I went through Radiotherapy from August to October last year and I’m still going through PCV Chemotherapy which started in February and will finish in October this year, so I’ve been having treatment for over a year since my second surgery.

“I’m in constant communication with my watch, either by drive-in visits or social media chats, which has made things better during the COVID-19 pandemic, as I had to shield.

“Thanks to the ongoing support of my family and work, I’m getting through this.“

Join one of our Online Support Communities for more stories and tips about coping with a brain tumour diagnosis from people who know what you’re going through.

Our employment resources can help you decide whether to tell your employer about your diagnosis and guidance on how you might have that conversation. There are also suggestions of “reasonable adjustments” that could be made by your employer to help you to stay in employment.

Much of the information is also applicable for those caring for somebody living with a brain tumour. There is also a resource specifically for employers to help them understand their responsibilities and how they can better support you.

Our Employment resources have received commendation by the British Medical Association (the professional body for doctors in the UK) in the BMA Patient Information Awards.

Last year our free Benefits and Money Clinic helped 332 members of our community claim over £950,000!

Tips from our community

“After returning to work following a long period of time off to recover from surgery, my partner said noise-cancelling headphones helped them focus without being exhausted by the background noise of a busy office.”

“Try not to compare yourself to your colleagues too much. You might be working a little slower after your diagnosis, but it doesn’t mean your input is less valuable.”

“I’ve been back at work over a year now but when I first returned I paced myself using a WobL watch. I would set it to vibrate at different intervals to remind me to take a break.”

“After her treatment, our 17-year old started working at a local stables for a few hours a week. They slowly built this up over time and they’re now doing three full days every week.”

Join one of our Online Support Communities for more tips about coping with a brain tumour diagnosis, from people who truly understand what you’re going through.

Use this resource to look at the pros and cons of telling your employer about your, or your loved one's, diagnosis, and how to go about it.

Possible effects of brain tumours and their treatment for adults – PDF

Use this visual resource to help make your employer/colleagues aware of the possible effects of brain tumours and their treatment. You could print off the body map to highlight those which affect you.

Employment 'charter' for people with, or caring for someone with, a brain tumour – PDF

A 'charter' of the employment rights of people with, or caring for someone with, a brain tumour. It covers England, Wales, Scotland and Northern Ireland.

This sheet gives examples of 'reasonable adjustments' that can be made in the workplace according to the side-effects you are experiencing.

My employee has, or is caring for someone with, a brain tumour – how can I help? – PDF

Use this to understand how best to support your employee and your responsibilities towards them.

A list of specialist organisations and services that can give information, advice and practical support to help you apply for, stay in, or return to work. Many can also give information and advice to employers.

clinicaltrials@thebraintumourcharity.org
Clinical trials and research information
Get involved in research

You can also join our active online community.

I struggle to work

Tasmin is a single mother of three children, and lives in Cheshire. She was diagnosed with a meningioma in 2013 and underwent a craniotomy. She is a midwife but has struggled with work and finances since the onset of her tumour.