Almost a quarter of all brain tumours in adults are meningiomas. They're very rare in children.

If you or someone you know has just been diagnosed with a meningioma, you may be in a state of shock. This is a natural way to feel. Our Support and Information team can help answer any questions you may have or provide a listening ear if you need one.

What effects can a meningioma cause?

How is a meningioma treated?

How long can I live with a meningioma?

A meningioma (pronounced men-in-gee-oh-ma) is a tumour that grows in the set of 3 membranes just inside the skull, called the meninges. The function of these membranes is to cover and protect the brain and spinal cord.

Meningiomas can be grades 1, 2 or 3, but there are no grade 4 meningiomas. Within these grades, there are also different types of meningioma, which you may hear during your diagnosis or during consultations with your healthcare team.

However, some types of meningiomas don’t behave as expected and can grow quicker than others.

These are the most common type of meningioma and may not cause symptoms for many years after diagnosis, therefore not needing immediate treatment.

Some of the different types of grade 1 meningioma are:

These are slow growing, but may be more likely to come back after treatment, possibly as a higher grade.

Some of the different types of grade 2 meningioma are:

These are very rare and faster growing, with a higher chance of recurring after treatment.

Some of the different types of grade 3 meningioma are:

What treatment do people diagnosed with a meningioma usually have first?

If you’ve just been diagnosed with a meningioma and are about to have treatment, you may want to see what other people’s first treatment was. Use the First Treatment insight in BRIAN, which you can personalise to make it relevant to you.

What are the symptoms of a meningioma?

Meningiomas can often be present in the brain without causing any symptoms for many years.

Symptoms usually begin gradually, as they gently push and compress brain tissue, rather than invading it. As with other brain tumours, the symptoms will depend on which part of the brain is affected. 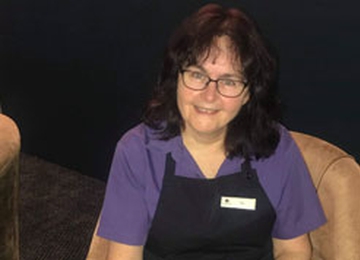 Five years ago I felt like my life was over, but now, despite everything, I’m really happy.

Susan Jones, diagnosed with a meningioma in 2014

"When I started suffering with headaches, fatigue and memory problems, I put my symptoms down to my age and the menopause. But when I started falling over, slurring my speech and couldn’t raise my arm, my daughter insisted I visited my GP and pushed for me to have an MRI scan.

"It was discovered that I had a meningioma on my left frontal lobe. Following surgery I lost the ability to speak, read, spell or even tell the time, and it greatly affected my memory. But I was determined to get my life back on track and after 18 months of rehabilitation, my speech and memory are much better.

"I’m now 60 and back at work. I split the rest of my time between writing books, volunteering and having fun with friends and family.

"It can be easy to think a diagnosis means your life is over, but there are still happy times to come – don’t give up! Find a goal, something to move forward for, and go for it. All any of us have is right now, and you have to keep picking yourself up and moving forwards."

Join one of our Online Support Communities for more stories and tips about coping with a brain tumour diagnosis from people who know what you're going through.

How are meningiomas treated?

Meningiomas are normally treated according to their grade, but their location, size, and the symptoms you're having will also affect which treatment you're offered.

People who are diagnosed with a grade 1 meningioma are often put on active monitoring treatment, with surgery and radiotherapy offered at a later date, if needed.

Grade 2 and 3 meningiomas usually have surgery, then radiotherapy.

As with all brain tumours, the answer is we don’t yet know.

It’s important to know there is nothing you could have done, or avoided doing, that would have caused you to develop a brain tumour.

Research is ongoing to find out the causes and help to develop treatment targeted at these.

We are starting to learn some of the risk factors. A risk factor is something that increases your chance of developing a tumour, but most do not directly cause the tumour.

Meningiomas are more common in people aged over 50, and particularly in people over 65 years.

As well as meningiomas being more common in women, it‘s also been noted that occasionally meningiomas can grow faster during pregnancy. Some studies have also suggested a link between breast cancer and meningioma risk.

In addition, it’s been found that some meningiomas have specialised cells (called receptors) that interact with the female hormones, progesterone and oestrogen. This has led doctors to believe that female hormones may play a role in increasing your risk of developing a meningioma

Research is looking at the role of hormones in the growth of meningiomas to understand the significance of this.

This is thought to be due to the fact that fatty tissue produces hormones such as oestrogen because the risk of meningioma in men is not linked to their BMI.

A small number of meningioma brain tumours occur as a result of rare genetic conditions.

For example, the rare condition neurofibromatosis type 2 (NF2) causes (usually low grade) tumours to grow along the nerves, including those in the brain and spinal cord. As a result, it’s known to increase the risk of developing brain tumours, including meningiomas.

Did you know that we have an Online Support Group specifically for people affected by a meningioma diagnosis?

How long can I live with a meningioma?

As with all brain tumours, this is difficult to answer. Your doctor can give you an estimate, based on your tumour grade, location and current health, but they may not be able to predict other factors, such as how fast it may grow or how well you might respond to treatment.

Find out more about meningiomas, including symptoms, treatments and risk factors in our new meningioma factsheet.