Clinical trials are a type of medical research that involve patients. They aim to gain a better understanding of brain tumours and are part of the process to help improve diagnosis, treatment and symptoms.

What is a clinical trial?

What should I consider before joining a trial?

How can I take part in a trial?

Paolo Jose De Luna, a Clinical Research Nurse, talks about what clinical trials are and why someone might think about taking part.

What is a clinical trial?

A clinical trials is a type of medical research that involves patients in developing a new treatment or way of managing a condition. It aims to find out:

Clinical trials can vary in how they work, based on the phase they are in, what they are studying and how they are designed.

“In the past for the medication I’ve been on, somebody else has gone through a clinical trial to ensure that drug was safe to use. I thought it was only fair for myself, in a similar situation, to do this for other people, who in the future will hopefully benefit from the drug I was going to test.” Stephen

What should I consider when thinking about taking part in a trial?

We know that participating in clinical trials is not right for everybody and that it’s important to make the right decision for you. Here are some things it may help to think about:

Tips from our community

“Our experience was that the NHS seemed to run out of treatment options very quickly. They didn’t suggest any clinical trials for my son, but after we did some research ourselves we found some trials that he would be eligible for.”

“You have to look at all the pros and cons and weigh up what the right choice is for you. Quality of life vs. quantity of life can be hard to think about, but it’s important to consider.”

“You’re entitled to a second opinion so possibly worth seeing if you can see another oncologist before making the decision whether to participate. If they agree that traditional chemo wouldn’t be effective then you’ve nothing to lose really by taking part in the clinical trial.”

“We decided against a clinical trial. There’s no right or wrong decision. I spent every waking hour trawling through the internet to try and find something but in the end I decided to just enjoy the time I have instead.”

By joining one of our Online Support Communities, you can get more tips about living with or beyond a brain tumour diagnosis from people who truly understand what you’re going through. 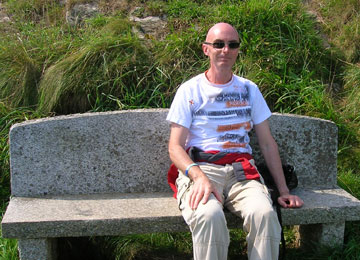 Stephen Lee, diagnosed with a glioblastoma in 2010

“I didn’t want to know my prognosis – my brother died from the same tumour, so I’d a good idea. My wife Margaret and I tried to remain positive and enjoy whatever time we had.   “I had various treatments, including surgery, then chemotherapy and radiotherapy, and lived as healthy a life as possible. Five years later, my tumour was back. I had more surgery and now have epilepsy, plus reduced spatial, concentration and memory skills. But I still have a good quality of life and am grateful to people before me who took part in trials that led to the treatment I’ve received.   “Clinical trials are so important to make sure the best possible medication is developed to treat brain tumours.   “In 2015, I took part in a clinical trial to test cannabis-based drug Sativex, taking it alongside my chemo for 21 days in every 28, for a year. It aimed to improve quality of life, which is very important to Margaret and me.   “I also thought it was important to do so as the chemotherapy and radiotherapy I was having had all been trialled by other people before it could be used safely. I thought it only right and proper that I followed in their footsteps and joined a trial to help prove a new drug which could benefit so many people in the future with a recurring glioblastoma. Actually taking the drug was really easy – it was a portable spray so I could use it whenever needed and wherever I was.   “Now, 12 years on from my diagnosis, we’re still making the most of our time together. While I don’t know whether I had Sativex or the placebo, since the trial finished in 2016, all my MRI scans have been clear.”   Join one of our Online Support Communities for more stories and tips about coping with a brain tumour diagnosis from people who know what you’re going through.
Online Support Communities

Speak to your healthcare team (e.g. consultant, clinical nurse specialist) about your interest in clinical trials and which trials you may be suitable for.

It may help to do some research before the appointment and bring along some information on trials you are interested in.

Before a treatment enters a clinical trial, it will have gone through preclinical testing in the laboratory, often for several years.
The UK has some of the most rigorous patient protection practices in the world. The HRA (Health Research Authority) must approve trials before they can open. To do so, they take into account the views of several different committees including:

A new drug is first studied in the laboratory. If it looks promising, it will go into clinical trials.
A clinical trial to develop a new treatment has up to 5 phases, each of which can take some time. It can take 10-15 years, or more, for a treatment to go from initial design to becoming standard treatment in the clinic.
When a trial has been proven to work well with fewer side effects than the standard treatment, it will be licensed for patients around the world to benefit from.

We have heard from our community that it can seem difficult to find a trial that they can take part in or that they have not heard about clinical trials before. There may be a number of reasons for this:

There are unfortunately not a huge number of clinical trials for brain tumours, meaning it is more difficult to find one that is right for you. This is something we are keen to change.

Read more about the research we fund


The eligibility criteria for trials can be strict. There are several reasons for this:

If you do not meet the criteria you unfortunately won’t be able to join the trial. Most often, trials are aimed at people who are newly diagnosed with a brain tumour or who have had a recurrence.

Trial locations vary across the UK and globally
Hospitals across the country have variable dedicated research staff and time. You may wish to consider other hospitals which it would be possible to travel to in order to receive treatment.

Read more about choosing where to be treated.


While there may also be trials available outside of the UK, in order to access these you would need to transfer your entire care to this country. Some people may also not be able to travel due to their diagnosis.

We know that it can be disappointing to want to take part in a trial and not be able to. If you want to talk to someone about this or are looking for support, please get in touch with our Support team on 0808 800 0004 (Monday – Friday, 9am – 5pm)

The trial will go on until one of the following happens:

Traditional clinical trials test only one drug or aspect of treatment at a time and take several years to produce results – positive or negative.
In an adaptive clinical trial, researchers can add in new drugs or combinations of therapies in response to a patient’s improved or deteriorating condition, thereby speeding up the research.
This is particularly useful for fast growing tumours.
Find out more

No, it would be unusual for patients to be paid for taking part in an oncology trial.

You can ask your local doctor or nurse if there are any local arrangements they can offer to help with the cost, e.g. access to hospital transport or free/reduced parking.
Read about help with the costs of travel to medical appointments

Find out more in the full fact sheet.

clinicaltrials@thebraintumourcharity.org
Clinical trials and research information
Get involved in research

You can also join our active online community.