Carrie was a vibrant person with many special qualities, interests and connections. It’s simply impossible to unpack every delightful memory but we will give a broad brush stroke of her life to capture some of the essence.

In 1963, Carrie was born in the charming market town of Cirencester to Barry and Margaret James and so began the journey of a woman who became a wonderful daughter, sister, auntie, wife, mother and friend. She and her older brother, Keith, grew up in Gloucestershire and the sudden loss of their dear mother showed them the preciousness of life. At an early age they learned to embrace each day and appreciate those closest to them. The friends and family that Carrie surrounded herself with were her treasure chest.

Barry remarried Margaret and along came two good-looking and lively siblings, Lisa and Danny, who were guided by Carrie’s exuberance and joy for life.

There was no room for rest as she involved herself with majorettes, Girl Guides, Scouts, swimming club and both Highland and Scottish Country dancing. It seemed there weren’t enough hours in her day and her father used to tease, “oh, the goal posts have moved again!” She even learned to play wind instruments including the skirling bagpipes! You may notice a Scottish theme occurring and yet at this early age, Carrie did not suspect she would one day settle in the Highlands. All she knew was she could turn her cant’s into cans and dreams into plans.

Although Carrie was a keen scholar her energy could not be bound by the classroom and she left school to pursue a job offers opportunity at a local chemist. It was there she trained as a pharmacy technician while studying at college in Bristol. Carrie had tireless work ethic and value for her hard earned money. She was regularly spotted by her siblings ironing £1 bank notes when saving to fulfil her ambition of travelling through the USA at the tender age of 20.

On return to the UK, Carrie decided to further her career in hospital pharmacy and received offers job offers in both Inverness and Cornwall on the same day. Thankfully, her first impression of Inverness was a thumbs up and she couldn’t resist moving to the ‘Bonnie Highlands of Scotland’. The sun must have been shining!

I first met Carrie when she was 22 and although she’d been in the Highlands for only a year, it seemed she knew her way around better than I did having climbed and cycled most routes and attended Scottish Country Dancing rallies throughout the land. Carrie claimed what swung it for me was when she witnessed me winning a Young Farmers’ gate-making competition and throwing together a BBQ for two by a remote lochside. I was just delighted to find a girl whose smile was as big as her heart not to mention her boundless enthusiasm for everyone and everything. She was truly high on life. During dances she would utter ‘everyone thinks I am drunk but I’ve only had two cokes’.

Our life took off and we married in 1989 on the banks of Loch Rannoch. It was a cherished day full of laughter as we pedalled towards our honeymoon on a tandem noisily trailing tin cans. We were fortunate to have three fun-filled decades of marriage, living close to the land with excursions throughout Scotland and abroad at any given chance. Together we loved the outdoors and pursued sporting activities. In the 90s Carrie was 7th lady in the Highland Cross with a personal best of 4hours 48minutes. Her sporting claim to fame!

Our happy twosome grew into a family with the birth of Katie and Alice in 1992 and 1994 but Carrie never slowed down. Heavily pregnant, she completed a charity Swimathon and later regularly ferried both girls to and from church in a bike trailer. 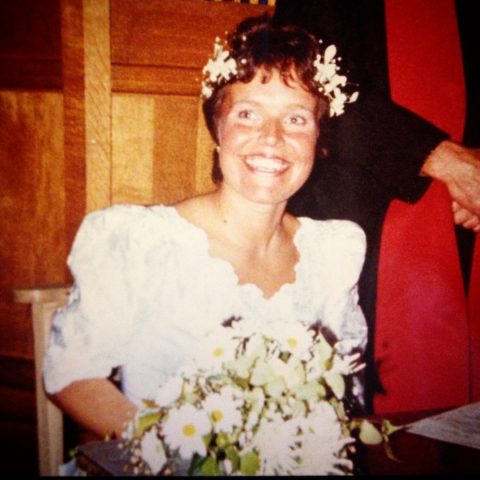 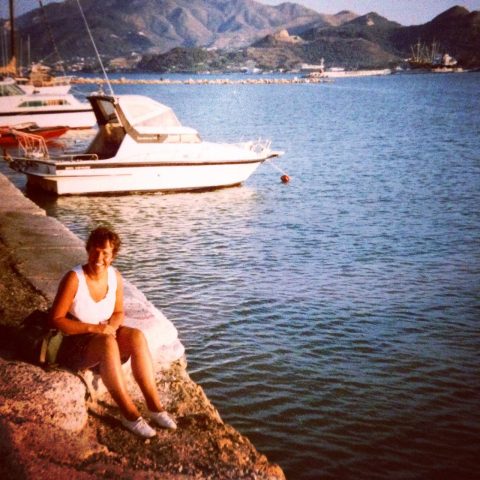 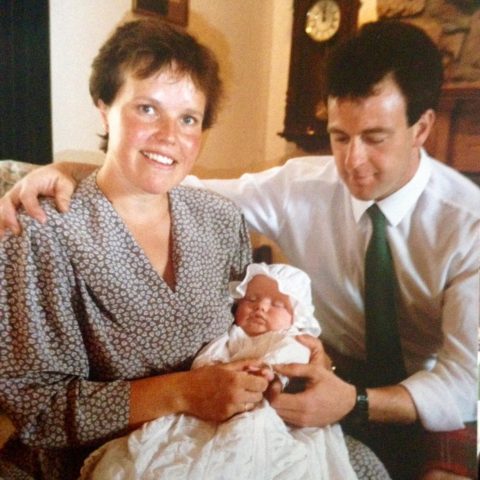 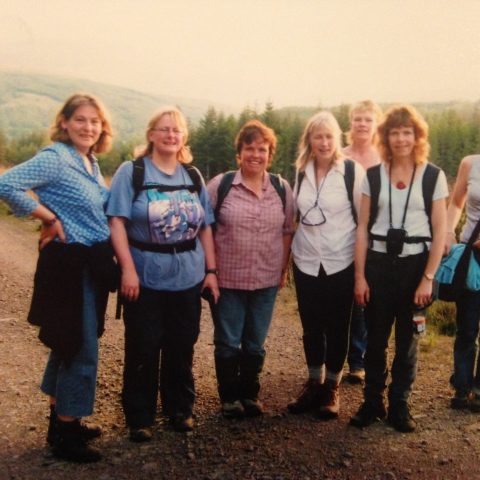 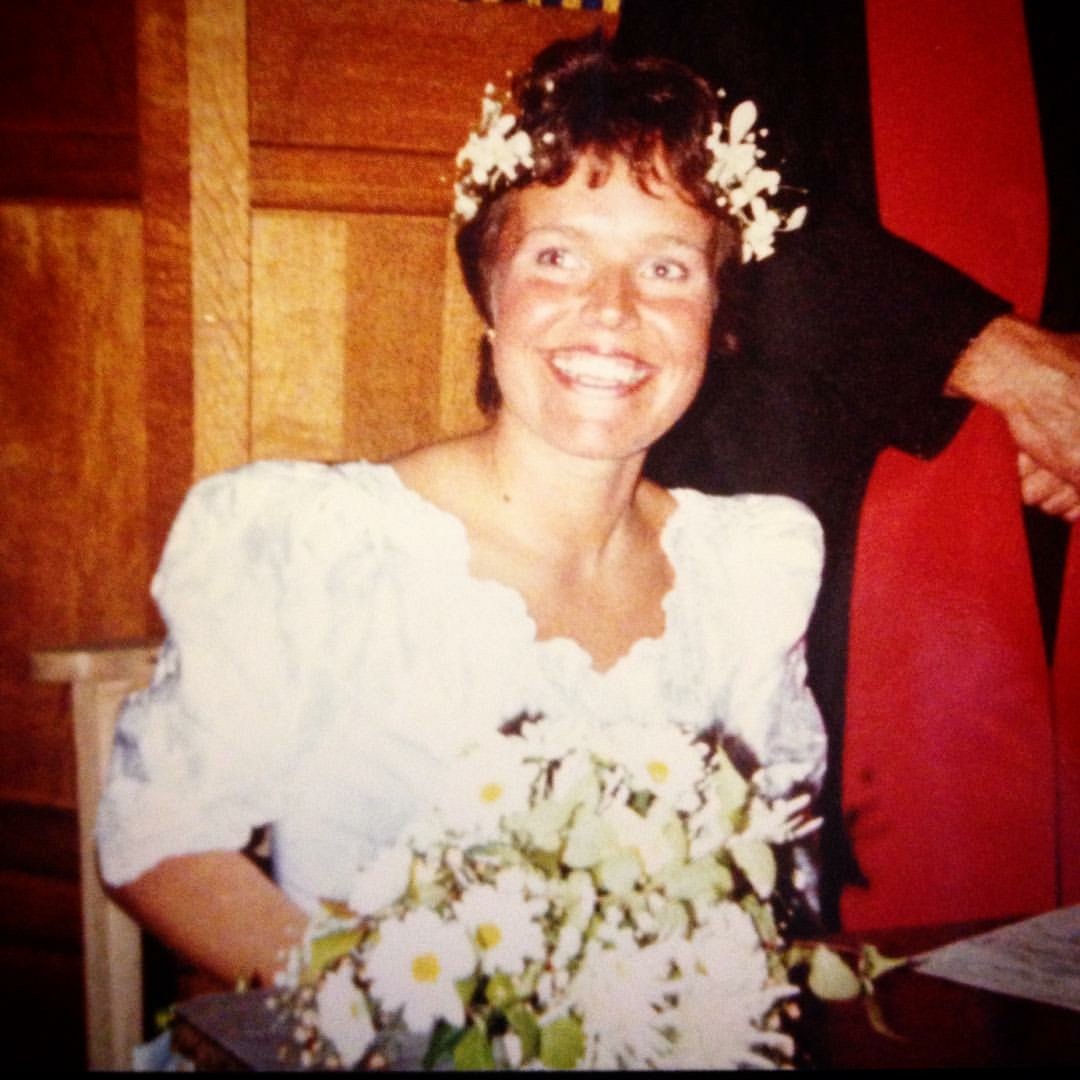 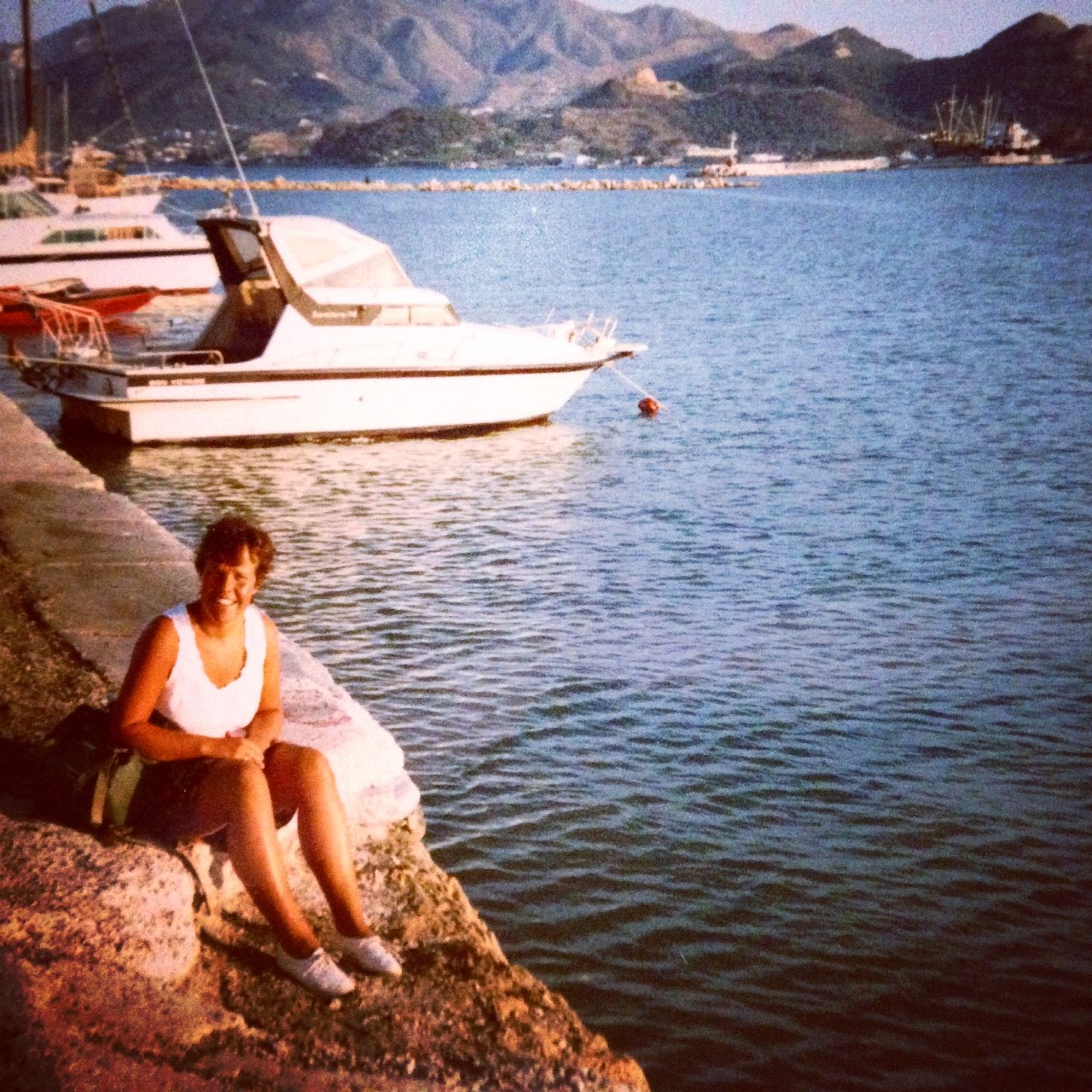 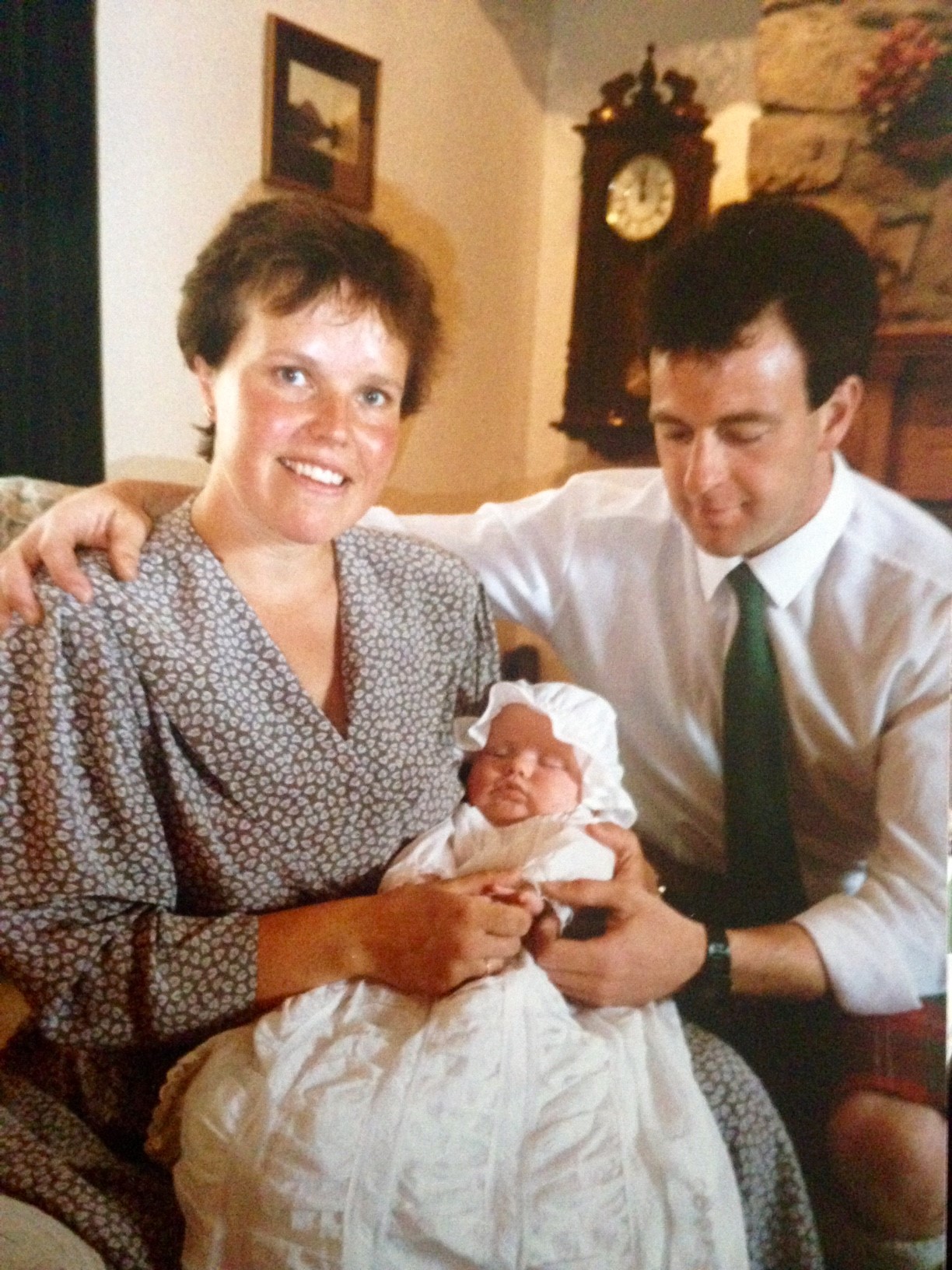 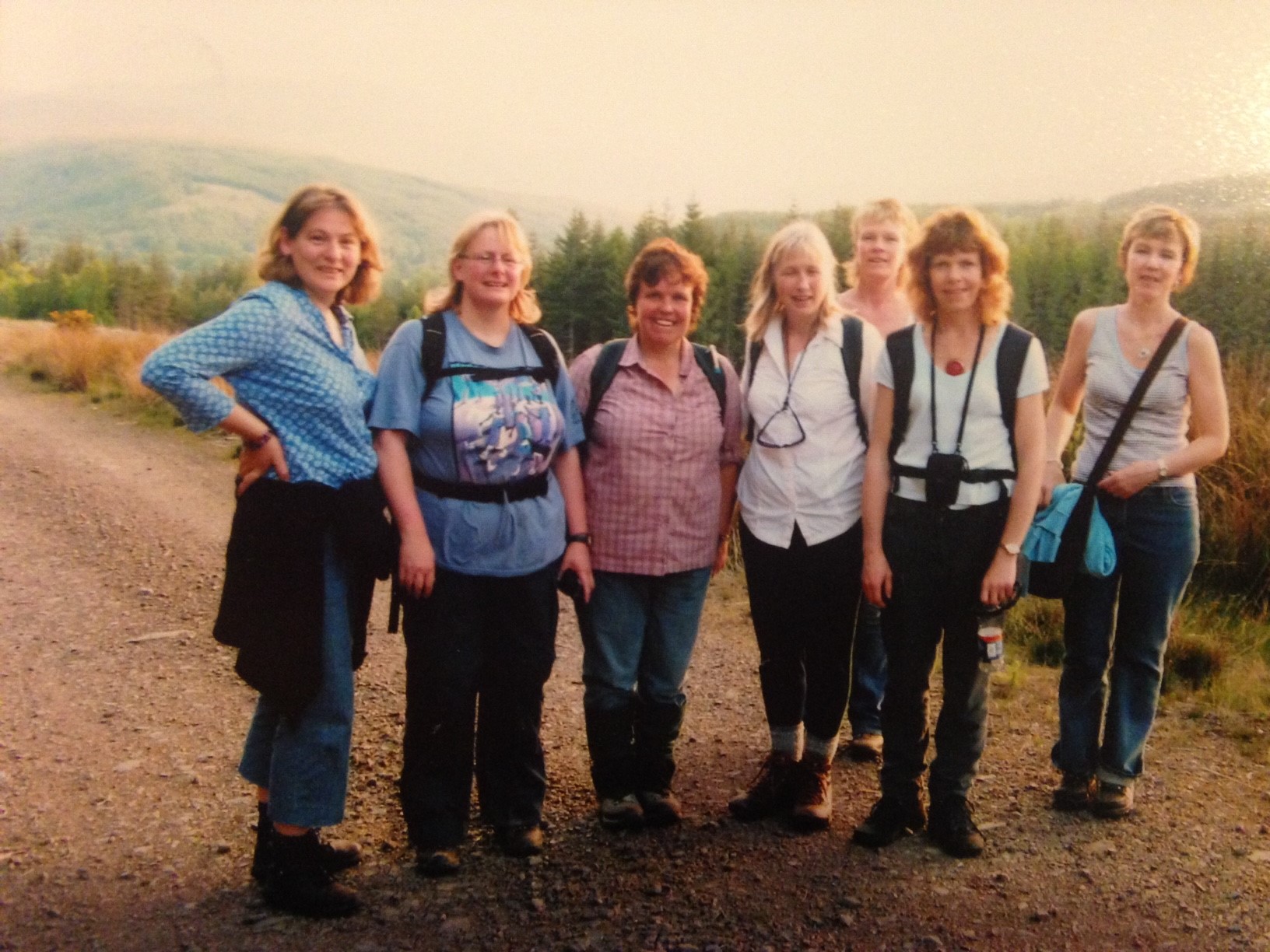 Mum left a career in hospital pharmacy to strengthen her commitment to family and community. With constant and unconditional love she gave us both roots and wings. Our home at Aigas was a safe base to explore the world though Mum would always be there wherever and whenever we strayed. Her steady presence was shown in person, by phone call or heartfelt text, Facebook message, letter or care parcel.

During our early years she filled a mothering role and more, as nursery school teacher, recorder coach and youth club leader to us and other local children. All of whom were inspired by her creativity and sense of fun. There were countless craft sessions of knitting, weaving, felting and mosaicking but our favourite creations were a princess palace made from toilet rolls, papier Mache, and gold paint, and of course, the two life-size camel costumes for our school nativity.

Our childhood was never dull and she left no stone unturned in making our lives as adventurous as her own. If we mentioned a new hobby or interest we would be signed up before we scarcely finished our sentence and she gladly took us to any club, lesson or event. This stretched as far as Mum collecting us from nights out at 3am equipped with a flask of tea, slippers, hot water bottles and all the essentials.

With her warm and welcoming nature, she was ‘Momma Mash’ to our close friends and visitors from France, Germany, America and South Africa. They gained unforgettable experience of Scotland. On one occasion our extended cousins from America were invited to guddle in the waters of Loch Ness and perform what she formally named the Nessie Call. Her imagination could take us anywhere.

Mum had a sunshine spirit which radiated throughout Aigas and our wider community. She had a budding romance with her garden which grew with every newly planted bed, which required the largest of trolleys when visiting Highland Liliums or Munro’s. We would plough her with cups of tea as she gardened into the night-time, sometimes running the engine of a car to light up her spot with the headlights. It was all worth it to see her pride when harvesting freshly dug vegetables for yet another Carrie concoction in the kitchen. She enjoyed catching a glimpse of wildlife and often strolled through the woods to watch osprey and peregrine accompanied by friends, a trusty pair of binoculars and a bottle of wine, or two.

Her love for the outdoors spilled into the golf course as she carried out green-keeping and mole-catching at full throttle with a faithful furry friend in our dogs Jake or Ivy. Later Mum completed a golf coaching qualification and encouraged juniors to pick up a club, along with their somewhat hesitant mothers and fathers. She was never deterred by a triple-figure scorecard and founded a small group of adult beginners aptly named ‘Wrong Direction’ who rejoiced every stroke, good or bad.

Mum had a strong sense of empathy and compassion towards others, dedicating time and effort to those less fortunate. She relished the challenge of a cycle trek through the peaks of Venezuela to fundraise for a rare genetic disorder called MSUD. Closer to home she helped to organised the Kilmorack Feis to offer local children an opportunity to learn and perform traditional Scottish music. A number of years ago, Mum threw on a jester costume, learned lines and taught our collie dog to juggle for a pantomime in support of the Highland Hospice. From charity Texas-scrambles to ceilidhs, Mum would raise awareness and funds for a worthy cause with endless cheer.

She could build rapport with all manner of people and was certainly life and soul of any party. Mum sang, danced and performed on every occasion and particularly in drama productions. At church or her acappella group she would compete among her friends as to who could hold an unwavering note the longest and whenever the opportunity arose she could recite a Pam Ayre poem in her Gloucester twang without rehearsal. Mum also lifted spirits through sport by running with the Harriers, bagging munros, curling and skiing. She even helped to re-establish the local Cycling and Touring Club for fitness and family rides which continues today. Mum was never put off by adverse weather and in the snow, she would stuff fertiliser bags with straw and career down the fields at rapid speed.

In 2012, life threw Mum a curved ball with a diagnosis of stage 4 GBM. With such a strong and brave spirit it is no surprise she caught the ball and continued to run with it until she no longer could. Throughout three years of invasive treatment Mum never complained about the unfairness of her condition, she was so brave and became more resilient as she continued to spread love and happiness. When receiving radiotherapy at Raigmore she set herself the challenge of cheering up two depressed men suffering with cancer who joined her in reception each day. After weeks of chipping away at their negativity, they finally broke smiles when she baked them a love heart cake for Valentine’s Day and hinted she was wearing red knickers. Every patient and health professional was amazed by such a positive life force.

Mum was an exceptional person who gave warmth and love to people near and far. Her incredible, infectious personality touched many and will continue to have a ripple effect. What a legacy she has in her loving family, lifelong friends and local community. She will be celebrated today and every day as we support one another and share memories of her great escapades. Think of her at the first tee on the golf course at Aigas, in the initial twirl of a strip the willow, at the brow of a cycle track or as you reach the cairn of a munro, and let yourself smile. In life and death mum has shown us the way.