Nick was a lovely family man, kind and generous, fun loving and fit. Following recovery from a very serious motorcycle accident and long stay in Selly Oak Hospital, Birmingham in June 2006, his determination to get back to normality portrayed an outstanding achievement. An ITV film crew followed him through this traumatic process and made a programme about him, showing him leaving hospital and returning home.

A year or so later, Nick began to experience symptoms which led us to believe he was suffering from post traumatic stress – most unlike his character, as he was a very down to earth man and extremely positive about life in general. Following a series of worrying events, Nick was admitted to Burton Hospital in October 2007 where a CT scan showed a tumour growing inside his brain.

Nick was admitted to Nottingham Queen’s Medical Centre and underwent a biopsy, the results of which gave us very bad news: a Grade IV Glioma. Unfortunately, we’d been given the bad news in the hospital ward at the nurses’ station, looking at a computer, where his parents and his children were present. Not quite the suitable location for such shocking news. 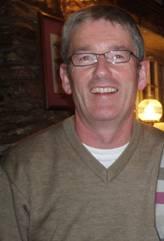 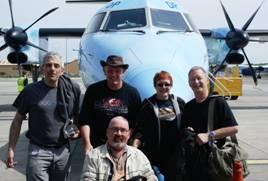 Early in January 2008, Nick received radio and chemotherapy at the QE in Birmingham – a very intensive programme of six weeks of radiotherapy every morning (except weekends) with him getting up on cold and frosty mornings ready to go with a cup of coffee in his hand to start the day. Unfortunately, Nick had to bear many side effects from his treatment, impacting on both his health and his personality. His mobility, speech sight and hearing all deteriorated. However, in his own way, he was upbeat and ever determined to do what he wanted to do, even baking bread at 2 or 3 in the morning!

He had a particular passion for motorbikes and owned three or four in his time. However, due to his illness, he decided the last one had to go; a very hard moment for him.As a keen motorcyclist, Nick always wanted to visit the Isle of Man TT Races which became possible in June 2008. His good friends, Jackie, Chris, Tony and Mick packed him up for a four-day adventure. Afterwards, one of Nick’s sisters asked him, “Did you have a good time?”, he replied, “No, … I had a FANTASTIC time”. This was to be Nick’s last fun event as he sustained a spinal fracture whilst away and was admitted to hospital shortly after he returned home. He spent three weeks in hospital where he couldn’t move, 12 weeks in St. Giles Hospice, Nr. Lichfield, followed by admission to a nursing home to receive the care and attention he so needed until, sadly, he passed away on 14th January 2009, aged 53.

Nick’s funeral was a celebration of his life and the lovely comments we received from friends and work colleagues made us feel very honoured that they thought so much of him both from a work point of view and as a kind and generous man. Nick was a great guy and we all miss him terribly. I, his wife Chris, was so lucky to have shared great times over 36 years and, of course, our two sons, Alec (22) and Sam (12), will have some of his characteristics; in time they’ll have lots of happy memories too. We have a wonderful supportive family and are very lucky.