Home » News » “My dreams of being a professional footballer were dashed by my brain tumour.”

Rhys Holmes, 31 from Newport in South Wales, spent his childhood dreaming of playing football before his young hopes were dashed when he started having symptoms of what would be diagnosed as a brain tumour.

Complications of his treatment have meant Rhys’ life is now completely different from the one he envisioned as he now battles with fatigue, reduced mobility, and he is also completely deaf.

Here, he tells us in his own words what it’s been like for him to make such a huge adjustment following a difficult diagnosis and treatment throughout the early years of his life.

“As a child, I was very active and I was football mad. I loved playing for my local team and I was the goalkeeper. I attended the Cardiff City AFC Soccer School of Excellence, which gave me a taste of what a future playing football could be like. I also loved my role as a drummer in the local scouts marching band.

Things were going well for me in school too – I was in the top classes for my year group and I enjoyed spending time with my friends. I was rarely unwell apart from the usual childhood bugs. It wasn’t until I was eight-years-old that things began to change.

I began to get headaches every few days then, after a few weeks, they were pretty constant. Shortly afterwards, I started to struggle to concentrate in the classroom. This soon got worse and I was beginning to get extremely tired.

I also found it difficult to keep any food down due to nausea and vomiting which happened every other week before it became much more frequent too, which would always accompany a high temperature. My mum kept me off school for a few weeks and the GP told us that I had a virus – but I just didn’t get better.

Little did we know at the time that I had the classic symptoms of a brain tumour, as highlighted by The Brain Tumour Charity’s Headsmart campaign which aims to raise awareness of the signs of symptoms of brain tumours in children and young adults.

Then a couple of months later, my vision became blurry. My mum took me back to the GP who suggested that I visit the optician. They seemed very concerned as the back of my eyes were swollen and I had an urgent referral to the eye clinic at St Woolos Hospital.

I had a lot of eye tests which confirmed that I had papilledema, which is a swelling of the optic nerve due to pressure, so I had a CT scan. Other than feeling absolutely awful, I had no idea that things were about to get even more intense.

We were sent to the University Hospital of Wales in Cardiff to see the specialist neurology team there. We were showed a scan, everything was explained, and I was booked in for surgery the next day. I stayed in overnight and my mum slept on a pull-out bed next to me in the hospital.

My mum cried as I was wheeled to theatre for the first operation of my life – we didn’t know how many more I would go on to need. The six-hour operation removed the golf ball sized low-grade pilocytic astrocytoma. The surgeon told my grandfather it was ‘textbook operation’, and that they ‘peeled the tumour off like a limpet.’

I woke up in ICU with a button to press for an IV of morphine if I needed it. I felt so sick and I was sleeping so much. Actually, for a few months, a wave of tiredness would just hit me and I couldn’t do anything about it. I couldn’t lift my head off the pillow for a few weeks because of the muscle damage from the operation. The pain was intense. I remember getting upset every time a doctor called Jane came to visit me as it meant that I was due another lumbar puncture.

My family and friends were amazing – my mum stayed with me all the time and friends came to visit. A nurse, Ian, even played Mortal Kombat on the Sega Megadrive with me – I won, of course. My Year 4 teacher and my Headmaster even came to visit me and they brought me a gift – a Goalkeeper kit for my team, Liverpool FC.

I finally went home for a day and my friends came to visit me. Then, I began vomiting and getting a high temperature again. I went back into hospital where I spent another few weeks.

Just when we thought it was all over, I had contracted post-operative Meningitis through infection after my surgery. I was back on IV antibiotics – the various medicines I was given often didn’t agree with me – I was allergic to a lot of them which meant more sickness and swelling.

In total, I was in hospital for seven weeks in a private room where my mum slept on another pull-out bed on the floor next to me every night – she was so upset for so much of the time that I can remember.

I was off school for so long before I was diagnosed, whilst I recovered from the surgery and with post-operative Meningitis. Despite probably missing a year or so of my education, I finished primary school with good grades, thankfully. But once I started high school, I got hydrocephalus, which is a build-up of fluid on the brain. The symptoms of it are very similar to the brain tumour – we all panicked that it had grown back already before I was diagnosed with something different this time. I had five VP shunt operations within two years.

I missed out at least a year and a half of those early days at high school. I really struggled to catch up on work and I lost the opportunity to play with my friends or meet new people from other primary schools. Then, when I did go to high school, it was all so strange. I didn’t really know anyone and that chapter of my life was only just beginning when everyone else was settled in by then. I felt like the new kid.

My surgeon told me that I had to stop playing football – my head was now too fragile due to the shunts. I was absolutely devastated – I was doing so well at it and it was my real passion.

I was under regular review to check for any signs of tumour regrowth until 2015 when I was 25-years-old. There hasn’t been any regrowth which is great, of course.

I now also have Superficial Siderosis which is a rare and neurodegenerative condition where a slow bleed into the spinal fluid causes iron to settle on the brain and spine which, over time, causes neural damage.

I have had surgery close to the leak of blood and spinal fluid at the back of my head but there is no cure for SS – just medication which can potentially remove the iron and an operation to stop the leak if it can be found, which isn’t easy.

All this has left me completely deaf, I have problems with my mobility which mean I often have to use a wheelchair, extreme fatigue and double vision, to mention just a few of the ongoing side-effects. In short, it has totally changed my life as I am currently unable to work and I have lost my independence.

Rhys as a child. 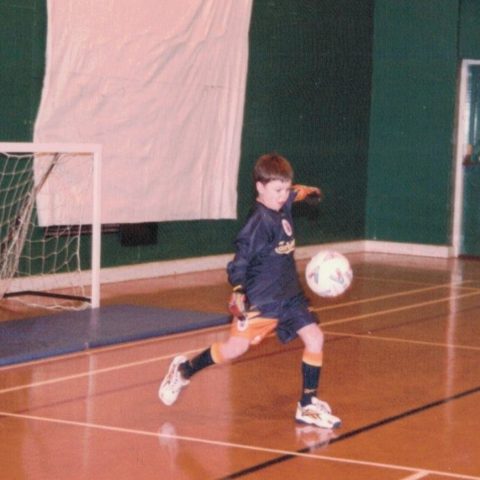 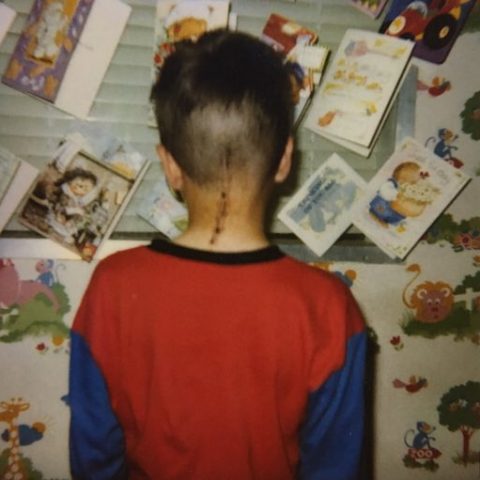 Rhys today by the Welsh coast. 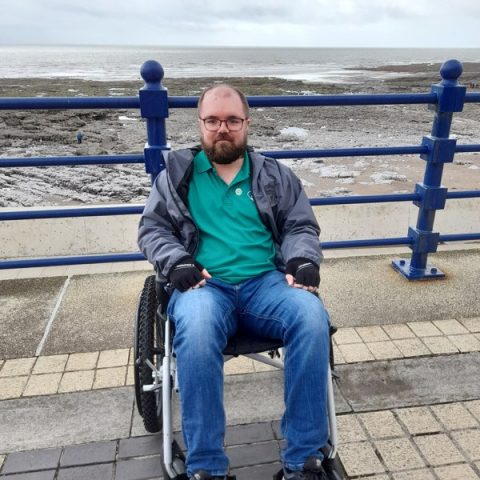 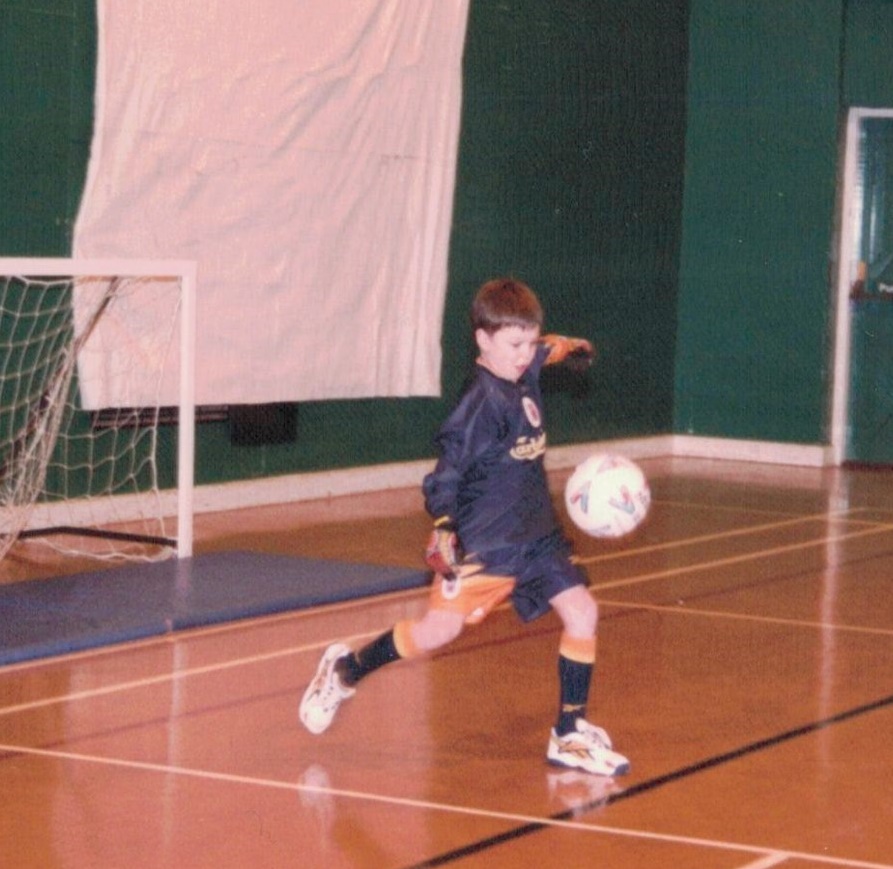 Rhys loved showing off his football skills as a child. 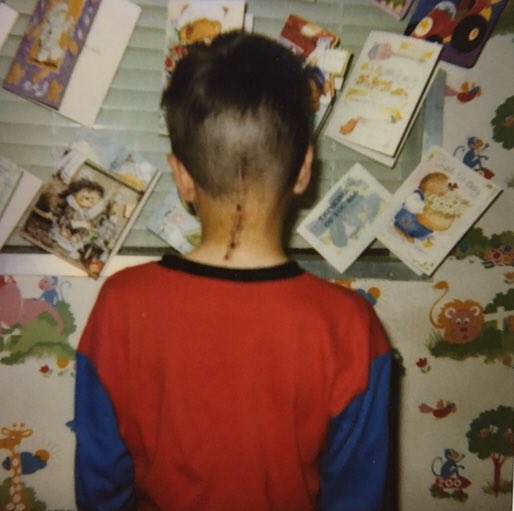 Rhys had his operation in 1998 with no idea of what else he was to face. 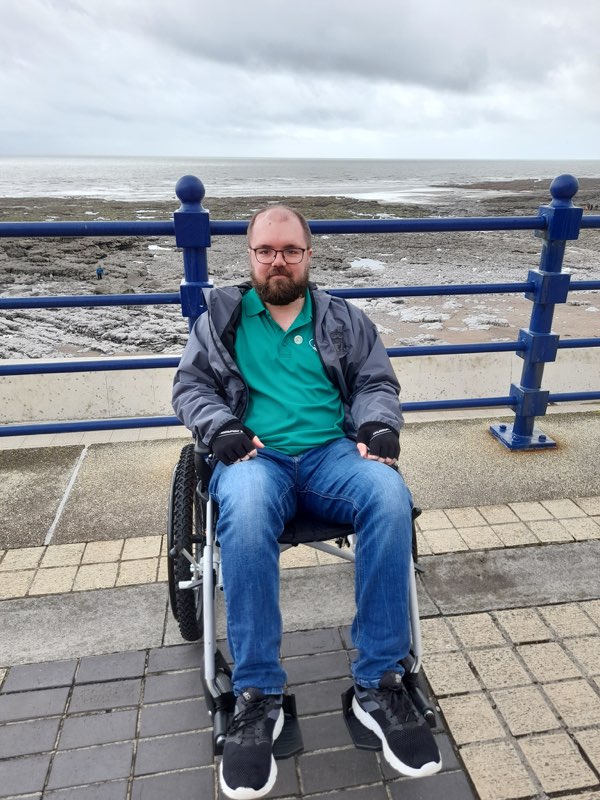 Rhys’ condition has left him with various side-effects including reduced mobility.

The Covid pandemic hasn’t been easy for me. I need regular injections for pain management and my appointments have been rescheduled or cancelled. I am struggling with the pain I am in on the back of my head where so much of the surgery was carried out.

I will never know why it took so long for me to be accurately diagnosed. In my experience, a brain tumour seems to be the last thing that my GP could ever have thought was happening to me. There’s not enough awareness about the signs and symptoms of brain tumours – even amongst the medical community. Even over the last 20 years since my diagnosis, it doesn’t seem like much has changed in terms of what treatment options are available. There’s still so much research which needs to be done to improve treatment options and general understanding of people who have been affected by a brain tumour.

The Brain Tumour Charity have helped me to know I am not alone. I actively follow their social media accounts, especially Twitter, and I read the personal stories from other people who have been affected by a brain tumour.

We need to raise more awareness of brain tumours as well as their signs and symptoms. The Brain Tumour Charity is doing a great job of this through their Headsmart campaign – but there’s a long way to go still until other people like me don’t have to go through agonising pain whilst being told that they just have a virus or any other misdiagnosis.

I am hopeful that new treatments will become available to help improve the quality of life of those who have been affected by this disease. The research being carried out by The Brain Tumour Charity is essential and it could pave the way for big things, including a cure.

If research and awareness prevents just one person going through what I have been through then that’s certainly a goal.

Get to know the warning signs of a brain tumour in children and young adults.

The Platinum Champions Awards are in honour of Her Majesty The Queen and launched by the Royal Voluntary Service in 2022!

Why getting involved in clinical research is important to me!