When Hannah Kinsell felt “weird” at a festival she put it down to five days camping.

The teenager was struggling to speak and described feeling as though she was in a “bubble”.

After getting home, her mum found her collapsed on the bathroom floor, fearing she had heat stroke.

When Hannah started “speaking gibberish”, her mum took her straight to A&E.

Scans revealed she’d had a massive brain haemorrhage, caused by a brain tumour.

“The doctors said, ‘There is a lump in your head and we need to take it out,’” said Hannah.

She underwent an eight-hour operation, which removed most of the tumour, followed by radiotherapy every day for a month and chemotherapy with severe side effects.

Biopsy results revealed it was a grade 4 aggressive glioma.

“I was distraught and found it hard to take in that, at 15, I had brain cancer,” said Hannah. 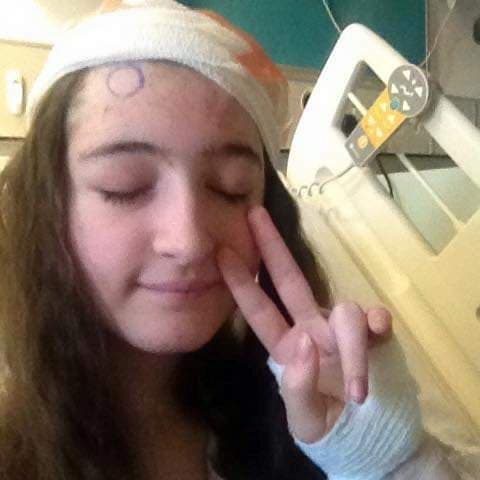 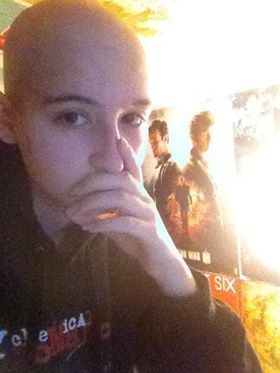 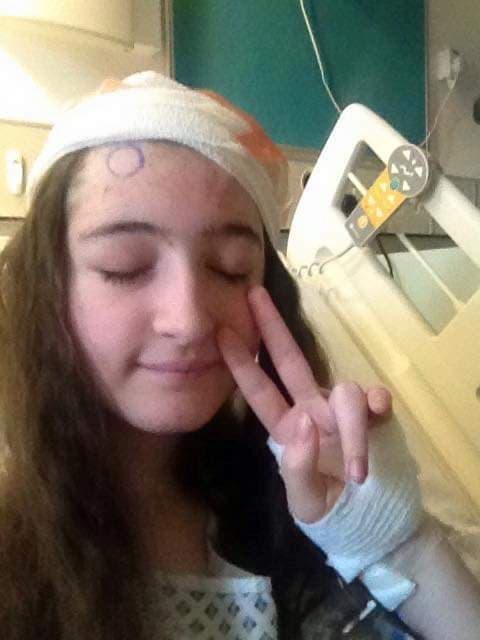 Hannah lost her hair having radiotherapy

Just five months later, the tumour grew back and she had further surgery to remove it, followed by more chemotherapy.

“It was even more of a struggle to accept what had happened to me and that it had made me a different person,” said Hannah, now 19, from Chesterfield.

“I wanted to press the rewind button to go back to the ‘old me’ and for everything to be like it was before.

“But I felt no one got me or understood what I was going through.”

Despite her challenges, Hannah took her GCSEs on time, passed her A-levels and is in her second year at Goldsmith’s University, London studying history and anthropology.

She is now in remission and a Young Ambassador with The Brain Tumour Charity, and is speaking out to raise awareness of how cancer can affect your mental health.

Hannah’s nightmare started in July 2014 when she’d just finished Year 10 and was in the middle of GCSEs.

“I was at a festival with friends and the last night I felt really weird,” said Hannah.

“It felt like I was in a bubble and I couldn’t talk to anyone.

“I just thought I was tired after camping for five nights and not getting much sleep.”

Her friend’s dad gave them a lift back home an hour away.

“Next morning, my mum found me on the bathroom floor as I hadn’t managed to get myself to bed, and I’d been sick a few times,” said Hannah.

“She thought I had heat stroke as it had been a very hot weekend.

“I had a cold shower thinking it may help.

“But then I started talking gibberish. I knew in my head what words I wanted to get out but just couldn’t speak properly.”

My mum drove me to A&E at our local hospital.

“I was very sleepy and they asked if I’d taken any drugs at the festival,” said Hannah.

But the teenager’s symptoms weren’t down to too much sun or partying – a CT scan revealed she’d had a brain haemorrhage.

Hannah was sent to Sheffield Children’s Hospital, where she had another scan.

“The surgeon didn’t want to operate straight away as he said I was now stable,” she said.

“I spent two weeks in hospital and just wanted to sleep most of the time.”

Three months later, Hannah had a follow-up scan, which revealed she had a golfball-sized brain tumour.

“When doctors told me, I asked if surgery could be put off for a week because I needed time to process what was happening to me,” said Hannah.

An eight-hour operation in November 2014 removed most of the tumour.

“As soon as I woke up, I asked for a cheese sandwich and a cup of tea, surprising everyone in the room!” said Hannah.

“Biopsy results showed my tumour was an aggressive grade 4 glioma, although they’ve never been able to say exactly what type it is.”

Just five months later, a scan revealed Hannah’s tumour – which she calls Bob – had grown back.

She had another operation in April 2015 to remove most of the tumour, followed by more gruelling chemotherapy.

The impact on her mental health intensified.

“Some days I couldn’t get out of bed,” she said.

“I was having panic attacks and felt a terrible sense of foreboding, but I didn’t realise I was depressed.

“I didn’t tell anyone how I was feeling – not even my family or sister Emily – not because I thought they wouldn’t understand or be supportive – I didn’t want to make them sad or cause more worry.” 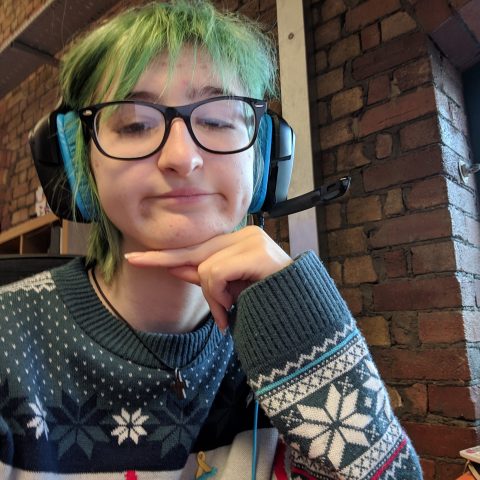 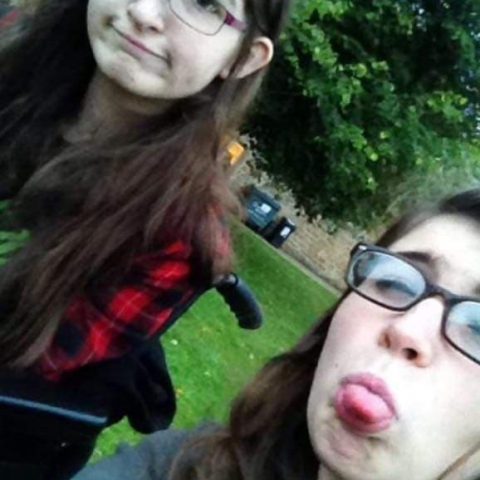 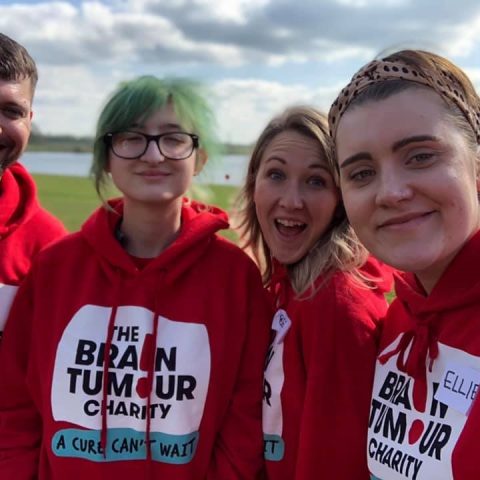 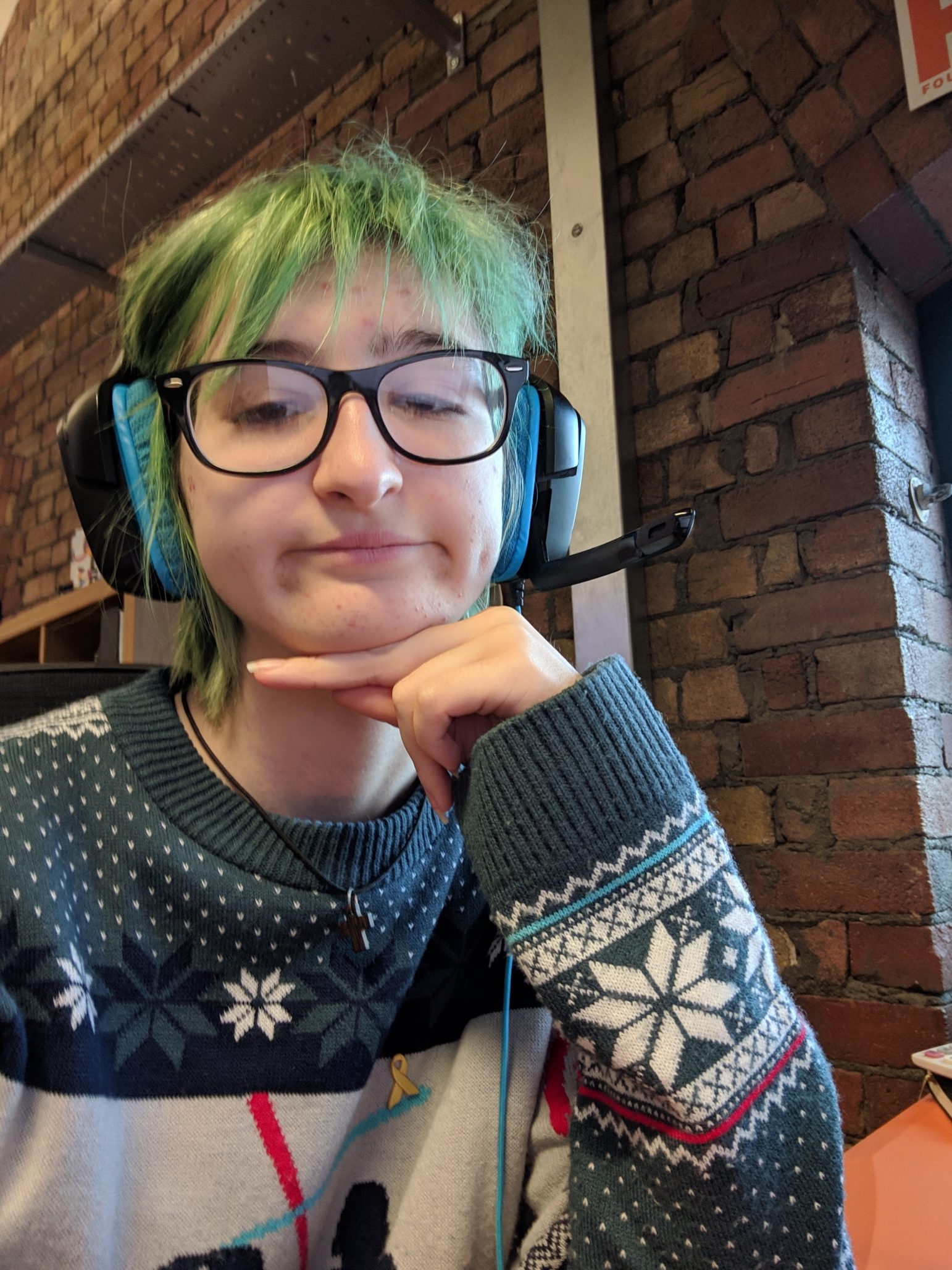 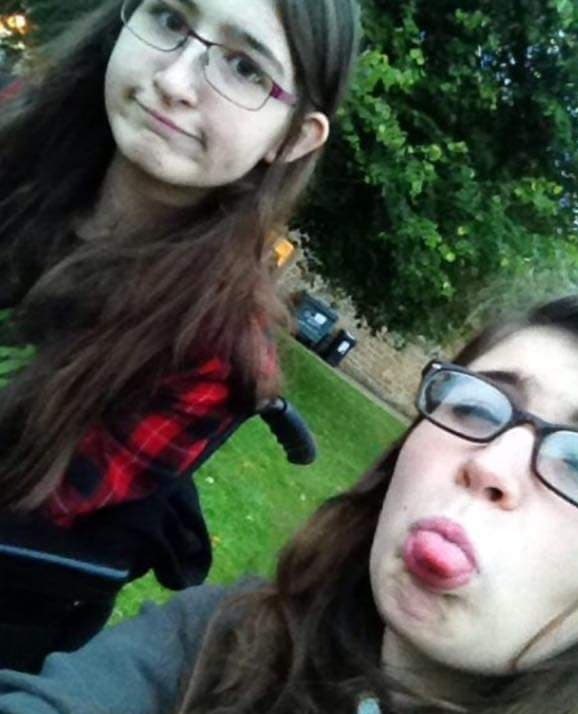 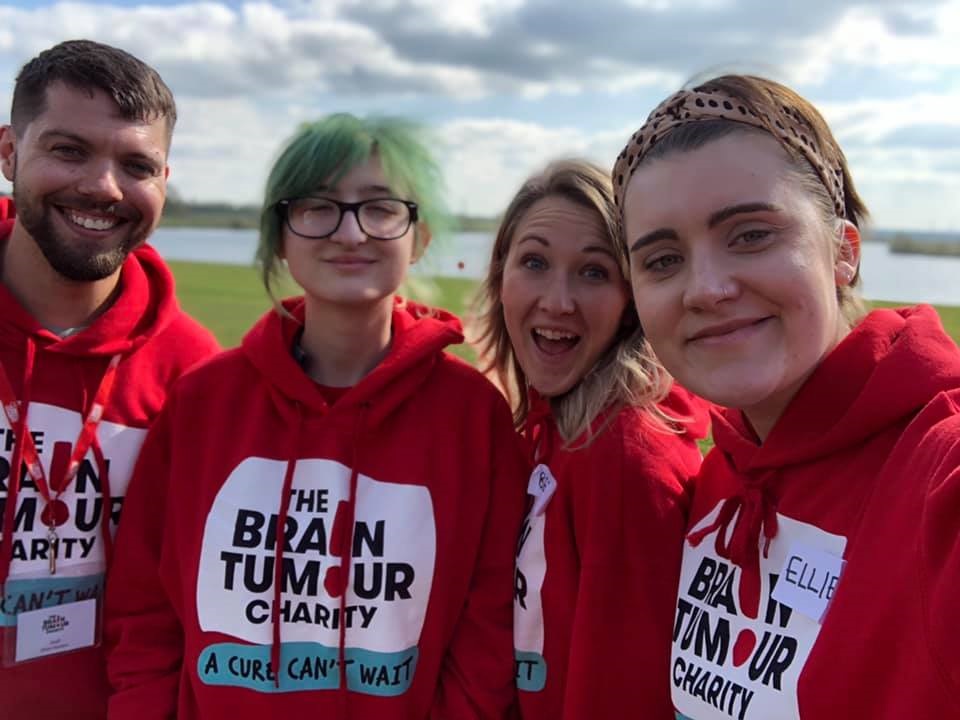 Her struggle was compounded by her fears she wouldn’t realise her potential or dreams.

“I was a keen student before my diagnosis and I found it frustrating my brain wasn’t working the same way anymore,” said Hannah, who rocked a green wig after she lost her hair and dyed it green when it grew back.

“My biggest problem was my fatigue which made it hard to study and revise.

“I didn’t think I could be the person I was meant to be or that I could achieve my dream of going to university.”

Counselling helped her adjust to the ‘new’ her and anti-depressants have also helped.

Hannah now has scans every six months which have been stable.

She still has good days and bad days.

“On a bad day, I feel hopeless, questioning why this happened to me and dread my tumour will grow back,” said Hannah.

“On a good day, I focus on the positive: that I’m in remission, my family, how much I’ve achieved and how much I love university.

“The Brain Tumour Charity has been a fantastic support – it just helps to talk to other people who’ve faced the same challenges – and I don’t feel so weird or alone now.

“As a Young Ambassador, I want to help other young people struggling after diagnosis and encourage them to speak to someone and not get lost in their thoughts.”

Now Hannah is full of hope for the future.

“Everything I’ve been through has made me a stronger person and accept myself for who I am – I’ve been known to introduce myself at parties, ‘Hello, I’m Hannah, I’m 19 and I have a hole in my head’.

“Cancer stole my childhood and I’ll never got those years back, but I’m determined it’s not going to steal my future.”

Emma Wood, The Brain Tumour Charity’s Young Adults Services manager, said: “We’re so proud to have Hannah as a Young Ambassador, and very grateful she’s brave enough to share her story to help other young people who are facing the same struggles with their mental and emotional health.

“The shock of diagnosis, treatment and struggling to adjust to the ‘new’ them means young people are often facing lots of different challenges, which can trigger depression.

“And added to that is the ‘scanxiety’ of waiting for scan results.

“We hope Hannah’s story and our video for Mental Health Awareness Week helps other young people know they are not alone and enables them to speak out.”