Niamh had just turned 3 when she died on 29th, September 2011, the day of the Archangels.

Niamh was a beautiful, caring, smiley and thoughtful child. Throughout her harsh battle with cancer, she showed admirable strength and resilience, she was an inspiration to us all and she will always continue to be one. She taught us courage, strength and faith. Her piercing blue eyes, beautiful smile and love of life will stay in our hearts forever.

Niamh was a very healthy and happy toddler. Soon after her second birthday, we took a family holiday to France. Niamh and her sister, Emilie, had a fantastic time camping and seeing their French relatives. A couple of days before going home, on 28th August 2010, Niamh fell and hurt her right leg. Although difficult to see on the X-ray, it was treated as a toddler fracture. Niamh could not apply any weight on her leg and she had a cast on for about three weeks. During those three weeks, Niamh’s hands started shaking when she ate or held a pen or did puzzles. We were a little concerned but didn’t think too much of it as she was so happy. When the cast came off, Niamh still couldn’t walk. She would take a few steps here and there with help but that was all. Some days were better, some days worse. Niamh was still going to nursery at this stage.

Then, one evening around 10pm, Niamh woke up screaming in pain, her legs in spasm. It lasted for about an hour and then she went back to sleep. We took her back to the fracture clinic, explained the non-walking, the shaking, by then the constipation and also the screaming episode. They were concerned and referred Niamh to a Pediatric Consultant. By then, Niamh had become very lethargic and would lose her balance whilst sitting. After his examination,the consultant said she would need a brain and spine MRI scan to rule out two types of brain tumours as well as blood tests to rule out leukaemia and a type of abdominal cancer. Total shock!

We waited a very long week for Niamh’s scan. During that week, Niamh was eating well, she seemed happy. Her balance and shaking were getting worse though and she did seem to be getting drowsy. She had the MRI scan on Wednesday, 20th October 2010 and, as soon as we came out of the scan room, we were told that Niamh was to be admitted to the Neurosurgery Ward immediately. In that instant, we knew our lives would never be the same. Niamh not only had a brain tumour but she had a very large one, 7cm by 8cm. Following her first (emergency) surgery on 21st October, she was diagnosed with a Supratentorial Primitive Neuroectodermal Tumor (PNET), a very aggressive and rare brain cancer.

We were then told that the cancer was now classified as an Embryonal Tumor with Abundant Neuropil and True Rosettes (ETANTR), even rarer. The next treatment option was craniospinal radiotherapy with a boost to the tumour location. Due to her young age and the large area of the original tumour location, the decision to go ahead with radiotherapy was a very difficult one.

Niamh finished radiotherapy at the end of June 2011. July was a happy but scary month. Niamh had finished treatment but we had no idea if it had worked. Thanks to very kind friends and the Dreams Come True charity, Niamh and Emilie met Mr Tumble twice in July. This was the highlight of their month. They were so happy.

Niamh made great progress with her walking and standing and even started to take a few steps unaided. We are so grateful to Niamh’s amazing physio for this. We were hopeful that she would be walking again by September. Things were looking up, even though at the back of our minds, we knew that her fight was not and would never be over.

Then it all went wrong. On 10th August, four days before Niamh’s third birthday, we were told that, despite the radiotherapy, the tumour had continued to grow. Niamh’s consultant told us that he did not believe that Niamh could be cured. We looked for further treatments but there were no more that we were prepared to put her through. We were told that Niamh only had weeks to live.

Niamh had a fantastic third birthday party with all her friends and family. She struggled along for the first part but perked up to play her favorite game: ‘What’s the time, Mr Wolf’. She loved having everyone around her to sing Happy Birthday to her.

We then spent the last six weeks of Niamh’s life in the excellent care of Acorns Children’s Hospice where Niamh got to enjoy the best possible time with her sister and Niamh and Emilie enjoyed their daily swim in the hydrotherapy pool. We are so grateful to Acorns for giving us the opportunity to share special family moments at a very difficult time.

Niamh passing away on the day of the Archangels gave us a reassuring thought that she had gone to meet the angels. On the day of her funeral, a beautiful rainbow appeared through the large window of the crematorium. All present had a warm feeling that Niamh was telling us that she was OK. This was our Niamh, a beautiful and caring soul which will live in our hearts for eternity.

Thanks to very kind friends and the Dreams Come True charity, Niamh and Emilie met Mr Tumble twice in July. This was the highlight of their month. They were so happy. 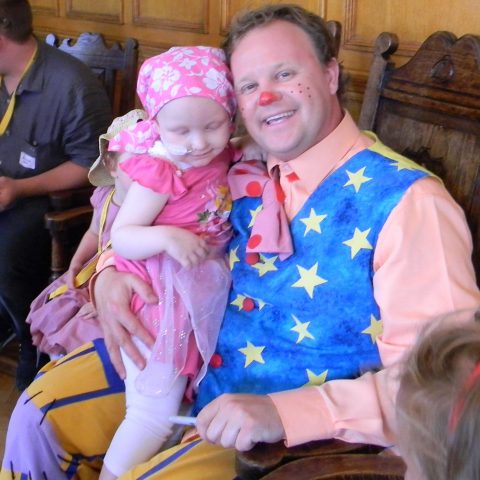 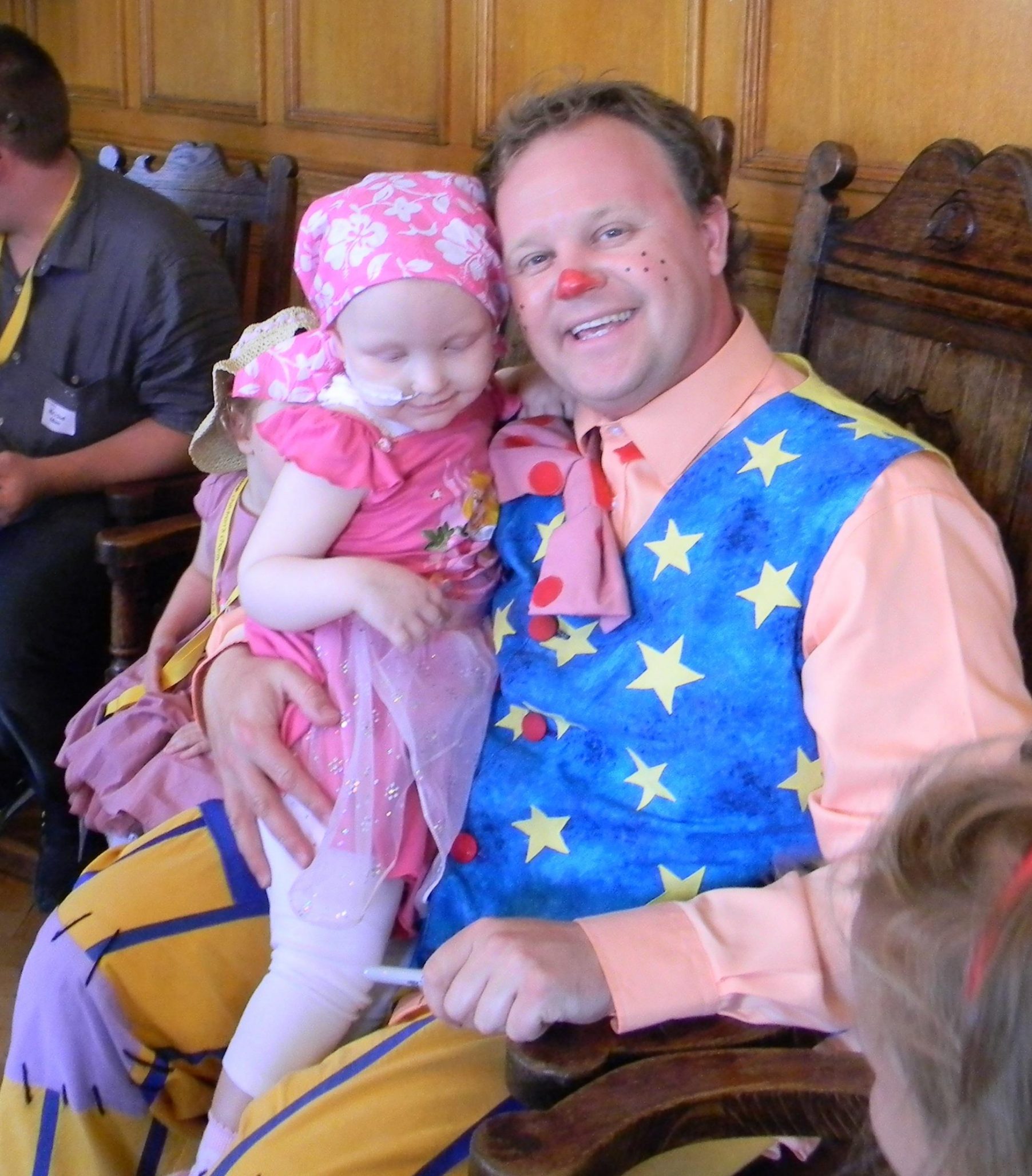