Lauren Loan, 30 from Durham, lost Katie, who was just 38-years-old, in January this year after she was diagnosed with a very rare and inoperable tumour – a diffuse midline Glioma in the thalamus – last October. Katie was given just two to three years to live at the time but, after the cancer spread, she was heartbreakingly given only a few weeks to live.
Katie left behind her husband and partner of 21 years, Stephen, and their two sons, 14-year-old Fletcher and Bryce, 5, as well as Lauren and her two children Reily, 12, and six-year-old Nevaeh and their parents Norma, 65, and James, 64.
Lauren said: “We were a very close family – Katie and I had a great relationship. Our eight-year age gap meant that she was like another parent to me when we were growing up. Then, when we had our children together, we became best friends.
“She was my biggest supporter, she was the life and soul of the party and she had a real zest for all that was on offer. She stood up for what she believed in and she was a big part of the community – she got a park built for the kids in the village. Now, a remembrance bench will be put up there with her name on it.”
Lauren has been tirelessly fundraising since she first found out about The Brain Tumour Charity in November when she turned to the Charity’s support team to get Katie’s finances in order. The Charity runs a specialist service to help people find out what financial support they are entitled to following a diagnosis. Lauren also joined the Facebook support group for carers to reach out to others too.
Lauren is currently training for The Great North Run later this year to support The Brain Tumour Charity and she has already raised more than £3,300, which smashes her target. She also raised more than £13,000 which will be split between Katie’s two children by shaving her head and running various popular online raffles.
Lauren said: “As soon as we heard that Katie would be having radiotherapy and could lose her hair I knew that I would shave mine off to support her. The treatment didn’t happen in the end but, for as long as I am alive, I will continue to raise money to help find a cure for this awful disease.”

It was in June 2020 that the usually organised Katie began to forget things, including their parent’s wedding anniversary. Then, in September 2020, Katie was having fatigue, problems with her balance and severe headaches. She had a history of migraines which had always been managed with pain relief so they didn’t cause much concern at the time.
Her symptoms were initially put down to stress but, as they got worse, the GP referred her for a scan and blood tests, which came back clear. But, unhappy with having to wait for the scan, Katie was taken to A&E at the University Hospital of North Durham. She had to be assessed on her own due to the Covid restrictions in place but, by that point, Katie’s short-term memory was failing so didn’t understand why she was there. A MRI scan was carried out which revealed the mass on Katie’s brain and so she was referred to the neurology team at the Royal Victoria Infirmary in Newcastle for further treatment.
Lauren said: “It was awful having to let Katie go into A&E on her own due to the pandemic. She didn’t have a clue what was going on or what was wrong with her – she couldn’t remember anything. We were getting texts from her saying ‘they keep asking me why I’m here.’
“Prior to all this, we never even considered that it could be a brain tumour – we really had no idea and neither did Katie. Then, we just couldn’t believe her diagnosis as she was such a healthy person.”
After she was referred to the neurology team, Katie’s treatment quickly sped up. She had a shunt fitted to drain the fluid which was building up on her brain and causing her balance issues. But it was unsuccessful, despite several operations almost every other week to try and rectify it, as well as a replacement also being fitted. Each time it stopped working, Katie had excruciating headaches and her balance problems got so bad that she was unable to walk. During this time, family visits were severely limited due to the pandemic and it was only Katie’s husband who was able to visit her on a regular basis.

Katie and her family. 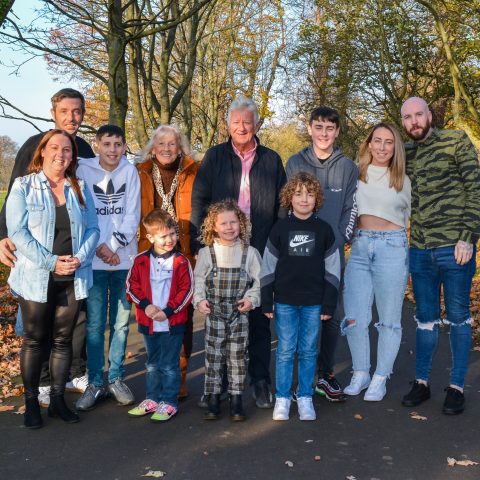 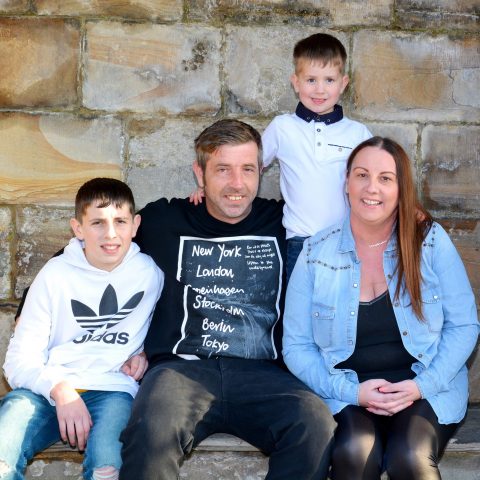 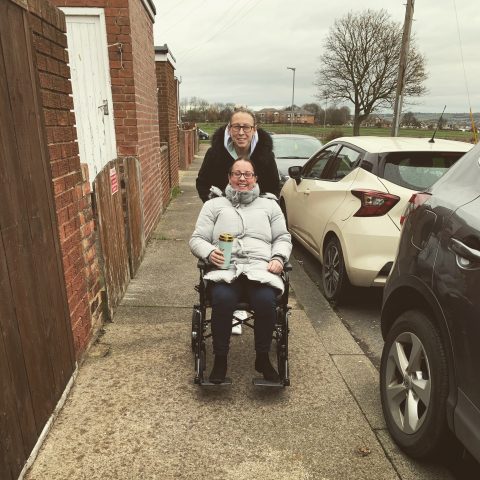 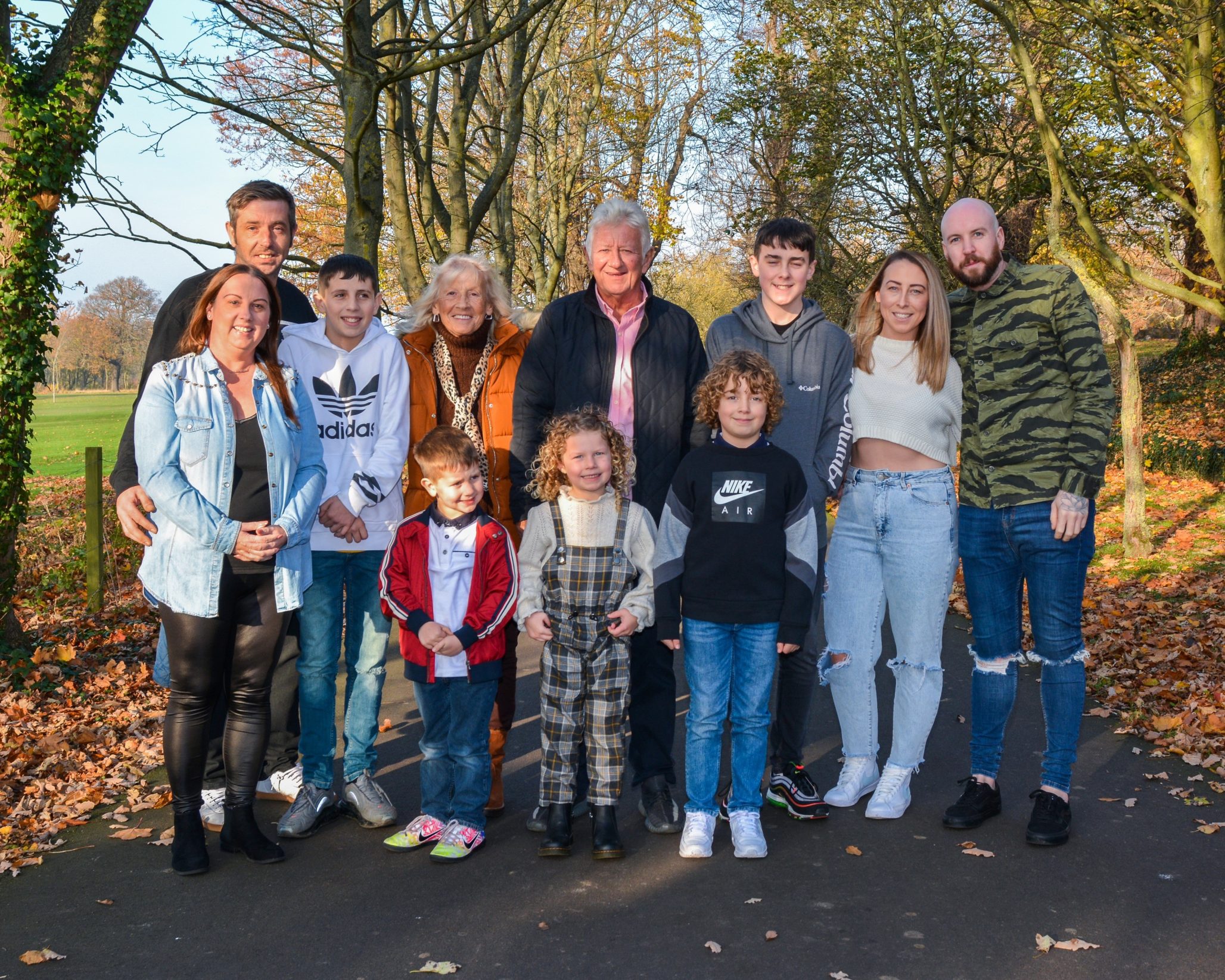 The family spent as much time together as they could following Katie’s diagnosis, which significantly impacted on her personality. 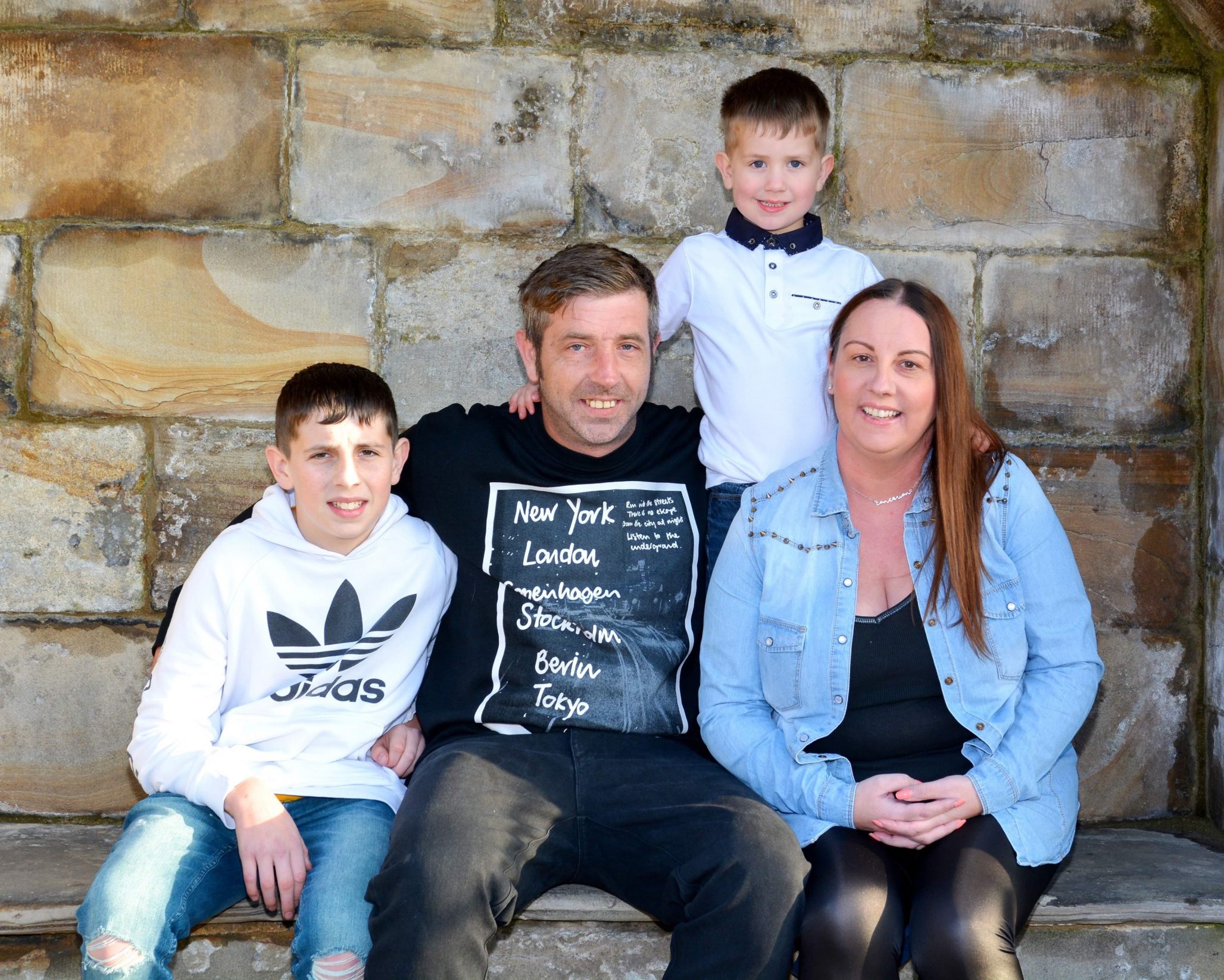 The loving wife and mum left her partner and two sons behind when she passed away. 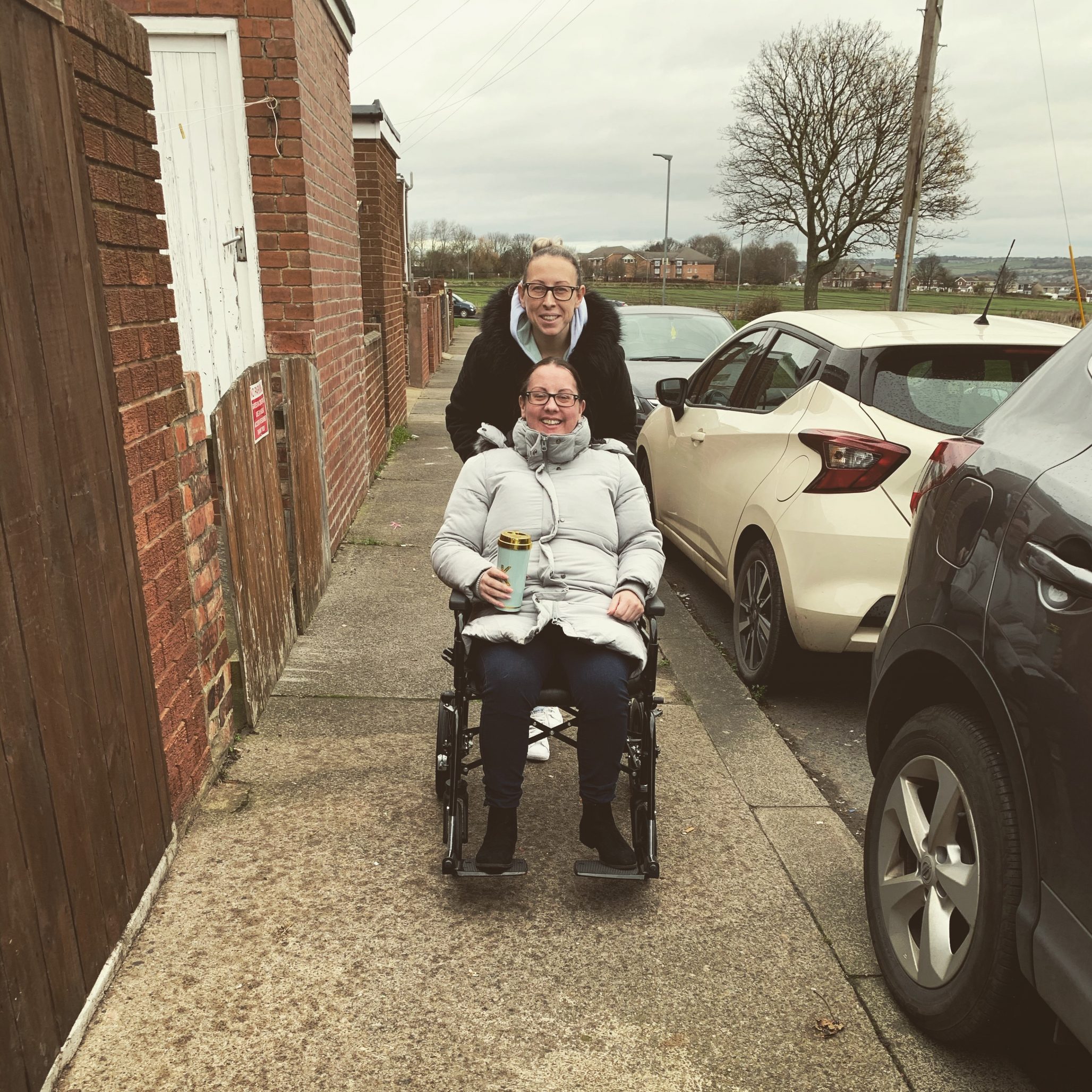 Katie’s family supported her as much as possible in the three short months following her diagnosis.

The family were told that Katie’s brain tumour was very rare – in fact, the oncologist nurses at the hospital had never come across one before. In addition, due to its location and the potential damage surgery could cause, it was also inoperable. Katie was scheduled in for radiotherapy, which could only take place when the wound from the shunt surgeries had healed. However, before that had chance to happen, the tumour spread in Katie’s brain and her prognosis was reduced to just weeks.
Lauren said: “We were, of course, devastated at the diagnosis of only two or three years, especially when she was only 38-years-old. It all happened so fast when she had so much life ahead of her with so many plans. Then to be told that she only had weeks left to live was just unreal.
“I found it so difficult to see the changes the tumour made to her as a person – Katie was fading away in front of us. She couldn’t walk so she needed a wheelchair to get out. She didn’t know how to be a mother or how to have a relationship with someone anymore. She didn’t make conversation and she didn’t want to do any of the things she used to enjoy – she would just sit on the couch and watch TV. She didn’t show any emotions – not even to her diagnosis – as she forgot everything again so quickly. Yet, in a way, that’s a blessing as she didn’t understand what she was going through.”
Katie was able to come home for the festive season and she was discharged from hospital on Christmas Eve. Around the Covid restrictions, return trips to the hospital and Katie being readmitted twice, the family spent as much time together as possible.
The family wanted her at home for her final days so they arranged palliative care, a hospital bed at Katie’s home in the living room and other equipment which they may need to care for her. She spent eight days surrounded by her friends and family before she passed away on 15 January – just three months after her diagnosis.
Lauren said: “We wanted Katie to be as comfortable as possible but how does a family prepare for a death like that – there’s nothing you can do to be ready.
“Cancer was something I never thought would happen in my family. But, it does not discriminate and it can happen to any person of any age. It took away who my sister was before she actually died by stripping away her personality and her emotions.
“I decided to take part in The Great North Run as I want to support the Charity – this helps me to keep focused and also try and make a different to help others. Katie will always be my motivation in everything that I do from now on as I want to make her proud.
“So for the rest of my life, I will continue to raise vital funds and awareness to find a cure for brain tumours. I hope and pray that one day no person will have to endure the pain my sister did and no family has to go through the nightmare which my family and I have experienced.”

You can help to find a cure for brain tumours by fundraising for us.

Take part in an event