Home » News » “He is surviving but not living,” says wife caring for husband with brain tumour.

Alison Moss, 59, from Ashby-de-la-Zouch, met Dave, who was 52 at the time, through mutual friends when she was 41 and living in south Wales. They quickly fell in love and, within a few months, Dave asked Alison to relocate to Ashby-de-la-Zouch and move in with him. Six months later, they married and went on a dream honeymoon to the Maldives bound up on enthusiasm for the life ahead of them.

Dave was completely enamoured with Alison and he often surprised her with extravagant gifts including a Mini which he had gift wrapped in the showroom and a hot air balloon ride. However, it was shortly into their heady romance that Dave’s health began to worsen.

Just a year into their relationship, Dave was diagnosed with lung cancer. He had surgery to remove half of one of his lungs and, fortunately, he made a strong recovery. The medical team said his good fitness levels as a regular Squash player were to thank for it.

Just five years later in 2010, Dave was diagnosed with a rare type of bowel cancer which required surgery and a chemotherapy wash through his bowel. Then, in another crushing blow, he was diagnosed with a Grade 4 Glioblastoma brain tumour in February 2013. The three cancer types are not thought to be related.

Dave was diagnosed after having a 25-minute seizure at home whilst he was reading a newspaper. He was rushed to hospital in an ambulance and the brain tumour was confirmed after an urgent scan. Dave was given a prognosis of just 12-18 months.

He had surgery to remove as much of the tumour as possible followed by 30 sessions of radiotherapy. He then tried three different types of chemotherapy – the first was ineffective and the second halted the tumour’s growth. At the suggestion of the consultant, Dave and Alison then went on a holiday of a lifetime to San Francisco so they could ride the trams, around California, through the desert to Las Vegas and onto Hawaii where they watched surfers on the beaches and beautiful sunsets from their hotel.

On their return, Dave had a third type of chemotherapy which shrunk the tumour and it has remained stable ever since with regular scan monitoring for any changes.

Alison said: “Before the seizure, Dave hadn’t been unwell at all. He didn’t have any of the symptoms you would associate with a brain tumour – not even a headache.

“After we got his terrible prognosis, I cried every day. It was horrible but we were counting down the time when we thought we wouldn’t be together any more. I would think to myself that any minute now he could have a seizure and then it would all be over.”

Dave had lost his first wife, Margaret, to the same type of brain tumour just a few months ahead of meeting Alison and she had passed away after a few months. So, Dave and Alison had an idea of what to expect in a bleak-looking future. But they never could have predicted that, nine years later, Dave would still be here. But he is battling with a poor quality of life and relying heavily on Alison and care home staff to carry out even the most basic of tasks or care for him.
Alison added: “Even now, we are all completely baffled as to why Dave has outlived his prognosis for so long – even the medical team can’t give us any answers as to why this has happened. The consultant can only reaffirm that Dave is one in a million.
“Although there’s obvious positives to Dave still being with us, the inescapable issue is that he is surviving yet he is not living.”
For the first couple of years, Dave was generally keeping well as he managed his symptoms with medication alongside side-effects including fatigue, mobility issues and incontinence. The couple were regularly able to enjoy time together by going shopping, out for an exploratory drive, go away for weekends and take their caravan to France each summer with their pet Labrador.
But, as the years passed, Dave began to have memory problems, no concept of time, increasing mobility issues and he also became doubly incontinent. This has meant that Alison has to look after almost every aspect of his basic care. She said that, because Dave wasn’t classed as unwell as his scans were stable, they weren’t offered any ongoing medical care or practical support. So, Alison put her own life on hold to become Dave’s carer and has done so ever since over the seven years which followed.
The only time which she did have to herself was her voluntary role at a local hospice where she would spend time with the patients and relatives whilst friends looked after Dave instead. Those who did visit the couple at home would see that Dave could function and have a short conversation so he appeared well – but Alison says that provided no real insight into the round-the-clock care he needed.
Understandably, this took its toll on Alison. She prioritised his care even when she was diagnosed with breast cancer and had her own surgery and radiotherapy to treat it, which finished in 2017. It was shortly after that Alison realised she had severe anxiety and depression which got to the point that she considered taking her own life.
Alison said: “As time went on, I couldn’t leave Dave’s side. My life just stopped so that I could be there for him. As Dave’s needs increased, I couldn’t even volunteer at the hospice anymore which had been my saviour and the only time I had to do something for myself. I found it such an honour and privilege to speak to the people there and I think the common ground I had with them because of Dave really helped too.
“There has been some very dark days. I was very close to ending it. The only thing which stopped me was ensuring that there was someone here to look after Dave. When he was diagnosed, I had promised that I would be there for him until the end so that’s what kept me going.”
Last year, Alison made the difficult decision to move Dave to a specialist care home for people with neurological needs. She feels guilty about this although she credits the home and its wonderful staff for providing Dave with exemplary care. Alison visits Dave three times a week and she also purchased a wheelchair adapted vehicle so she can take him out for coffee, cake and a change of scenery. She also feels guilty for the times when she lost her temper with Dave when the burden of responsibility she felt towards him was just too much to bear.
There have been times when Alison has longed for the peaceful release which Dave’s passing would bring for them both. It was following Dave’s Covid booster that the hospice staff contacted Alison to say they thought that the end was near. Dave had lost the ability to swallow, speak or move so Alison remained by his side and, with the support of hospice staff, a DNR form was signed. However, four days later, Dave’s condition improved. Alison admits that would have been the perfect way to say goodbye to Dave as she was with him and she sat lovingly holding his hand throughout that uncertain period. 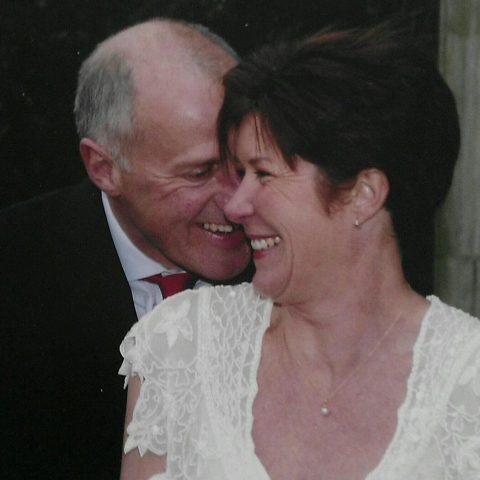 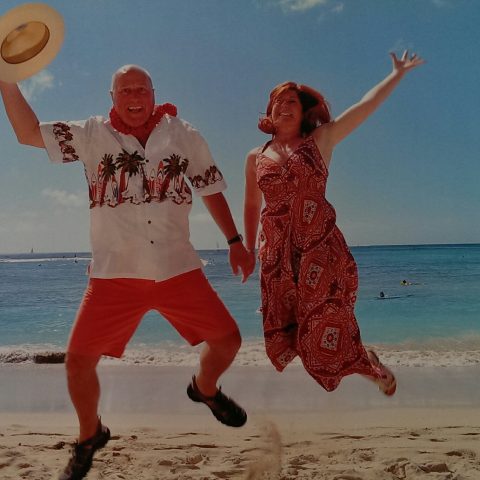 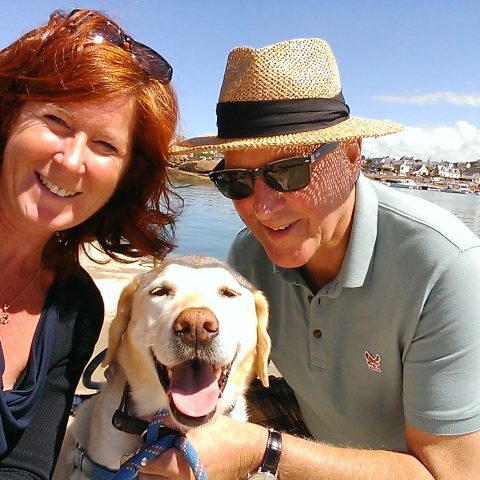 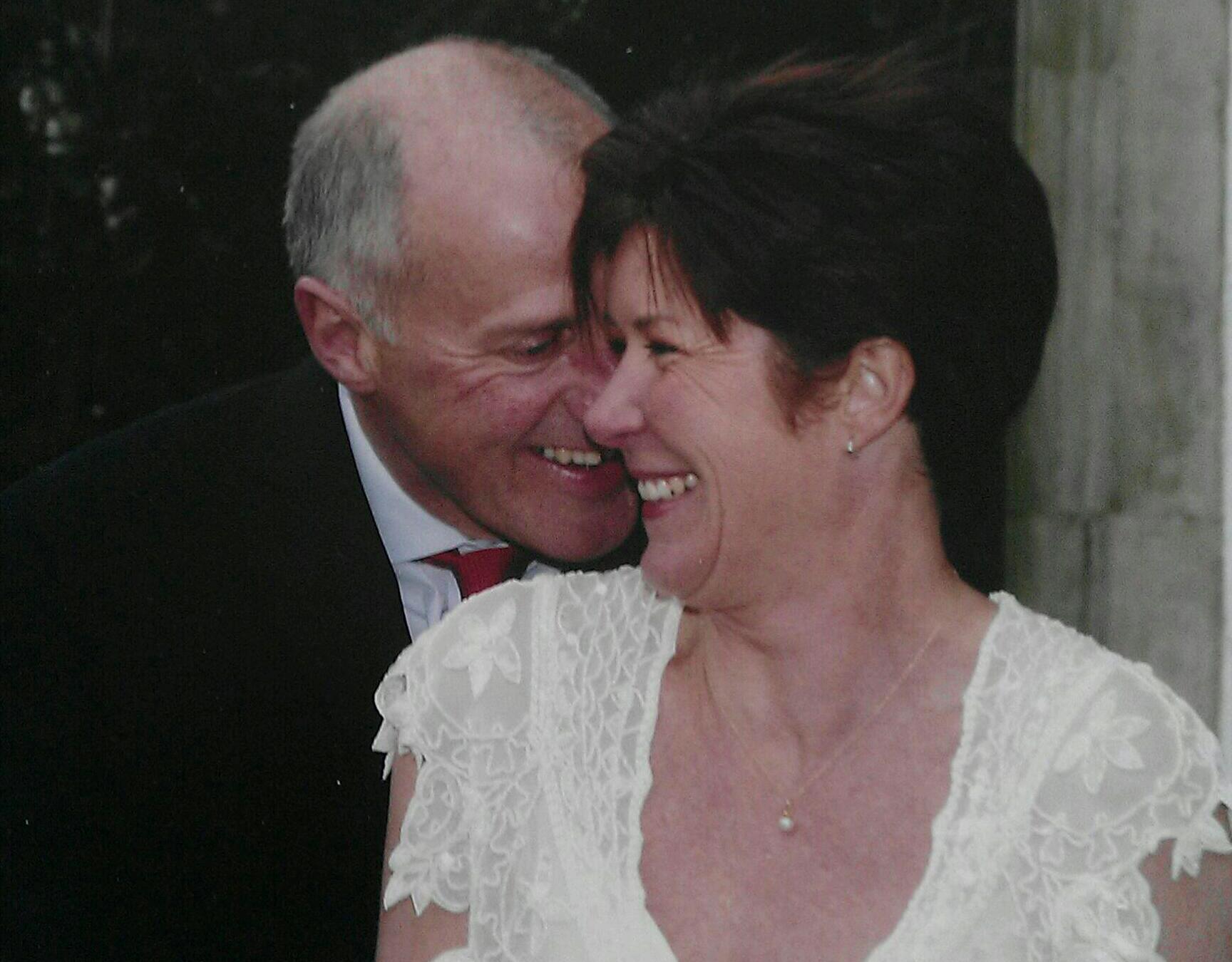 Dave and Alison married shortly after meeting through mutual friends. 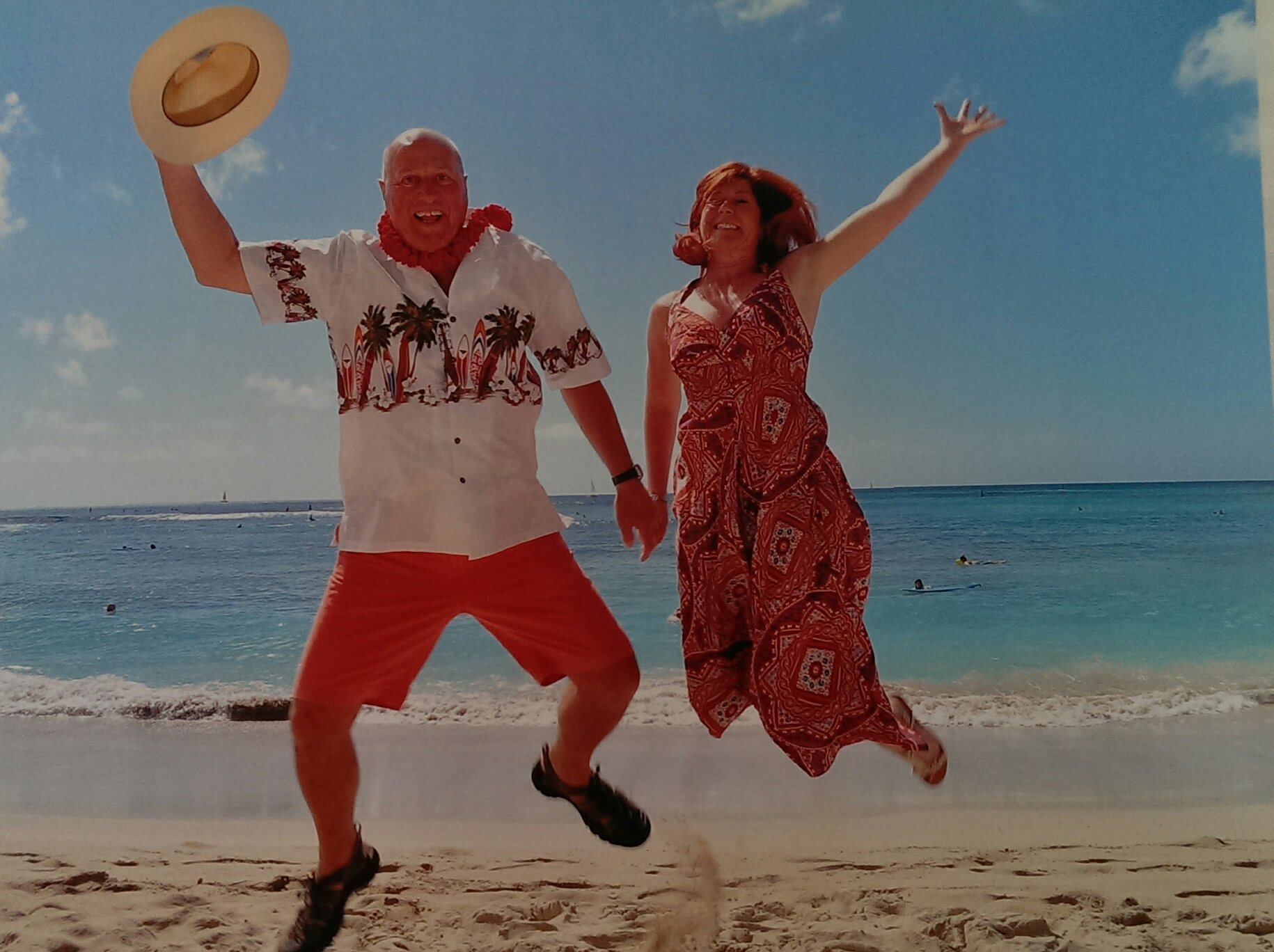 The couple loved travelling together prior to Dave’s diagnosis. 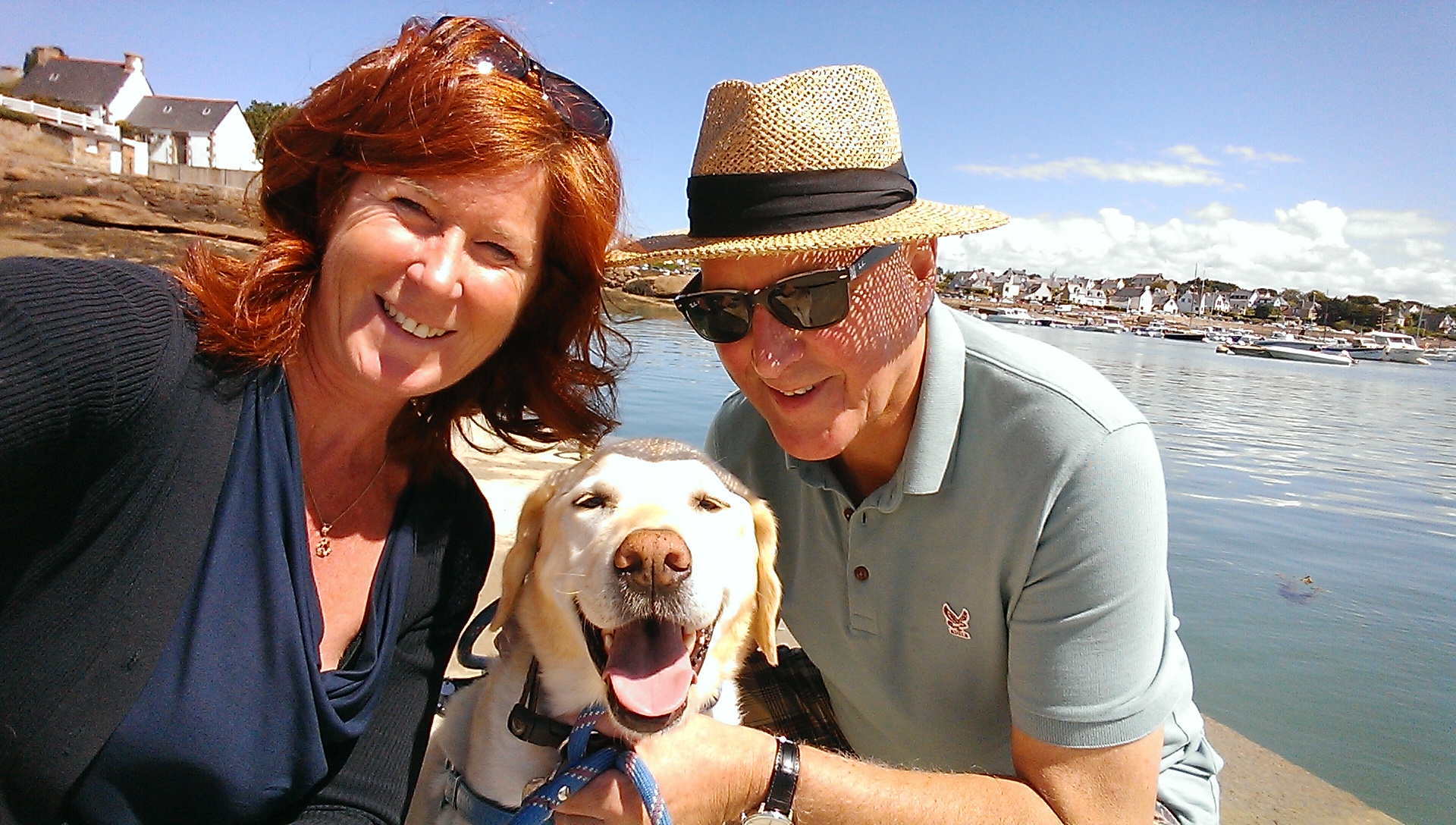 Even after Dave was diagnosed, the couple enjoyed trips together with their pet dog.

On difficult days, Alison has sought comfort from the support services run by The Brain Tumour Charity. She found out about the Charity when Dave was first diagnosed and particularly credits the closed Facebook groups specifically for those who care for someone with a brain tumour. Alison has also fundraised for the Charity by completing the Three Locks Challenge and covering a distance of nearly 34 miles in eight hours and raising nearly £1,000 by doing so.

Alison said: “The online groups have helped me to find a way through the practical and emotional complexities of it all. You can go on there and find other people who are thinking and feeling the exact same way and it’s helped me to not feel guilty for some of the ways I have behaved or felt over the last few years.
“I think the hardest part of it all has been not knowing where to go to get help or support when it hasn’t been readily offered to us. After Dave’s treatment ended, we were just left to muddle through. In the Facebook group, you can ask any questions and someone will usually be able to help as they have had to navigate it all too. It has helped me to not feel frightened by it all and to appreciate that I am not the only one who feels like they can’t do it all themselves.”

Despite her hardship, Alison remains truly grateful for the relationship she has had with Dave over the years.
She said: “Right from the beginning, Dave and I got on so well and we had a lovely relationship. Dave never has a bad word to say about anyone. He is calm, a real gentle man, and I was honoured when he asked me to be his wife. It wasn’t long after he had been widowed but he told me when he proposed that life goes on and that he was taking his chance to be happy. He also thanked me for loving him and for leaving my family behind in Wales to be with him.
“I know it goes around in Dave’s head that he could get better or that he may be able to do certain things again in the future, like get his driving licence back. He doesn’t seem to understand that just won’t be possible.
“Now, I don’t see a future for either of us. I can’t have any dreams because I don’t think they will come true. A friend asked if I would go on holiday to Spain with her but I just can’t leave Dave on his own.
“I just want to get on with my life. I have spent all of my 50s looking after Dave and now I feel like my time is just slipping away. Dave has told me that he hopes that I will find someone else as he said that I have a lot of love to give – and he’s right.”

Have you or a loved one been diagnosed with a brain tumour?

Join our online community and find people who know how it feels to be affected by a brain tumour diagnosis.