Home » News » Husband and dad shares the acute pain of losing his beloved wife to a brain tumour.

Nick Chambers, 52, from Lincoln lost his wife Karen on 12 July 2020 – just weeks after she was diagnosed with a Grade 4 Glioblastoma. She left behind her adoring husband Nick as well as their two children – 23-year-old Chloe and Elliot, 15.

Nick is now adjusting to life after the painful loss of his beloved wife. As he mourns this loss, he visits Karen’s grave every day, including on 20 May which would have been Karen’s 48th birthday – her first birthday since she passed away.

He said: “Karen wasn’t old enough to die. Our world shattered so very quickly – some people live with cancer for years but this tumour didn’t give Karen anything. One by one, it shut down every part of her. Everyone was so shocked – no one saw this coming.

“Karen was so keen to live and we were looking forward to the next chapter in our lives together and making all that we had dreamed about a reality. Instead, I now visit her grave to sit with her and watch the sun go down, to smile, to shed a tear or just to take in the silence.”

In March 2020, ahead of the first Lockdown due to the Covid pandemic, Nick, Karen and Elliot visited their holiday home in North Yorkshire for a relaxing weekend together. During their trips, they enjoyed regular visits to abbeys, castles and stately homes which always involved tea and cake in the cafes afterwards so Karen could indulge in her love for people watching.

On that particular weekend, Karen had a headache on the Saturday but, as both her and Nick often had migraines, they didn’t think much of it. She completed a jigsaw she had begun the previous day then the family enjoyed lunch and a walk along the beach Saltburn by the Sea before heading back to Lincoln.

Over the following weeks, Karen’s headaches got progressively worse to the point that she often didn’t want to get out of bed. She spoke to a member of the Community Nurse Team who prescribed migraine tablets.

However, Karen soon began to experience further discomfort and feel increasingly nauseous. Nick contact a friend, who was also a retired GP, and he spoke to Karen regarding her symptoms but the call had to be cut short as she began to be sick. As a result. Nick contacted Karen’s own GP who agreed to refer her for a CT scan, although the waiting time would be up to two weeks.

The next day, Karen’s symptoms worsened further so they made an emergency appointment at Lincoln County Hospital. But, as Karen got ready to attend the appointment, she had her first – and what would be only – seizure in the shower.

Nick got Karen out of the shower and dressed so that he could take her to the Urgent Care Clinic but he was asked to leave due to the Covid restrictions in place. Instead, he sat on the kerb outside for hours waiting to find out what was happening. He contacted their retired GP friend who agreed to speak to Karen’s consultant and so a CT scan was carried out.

Nick was then met by a nurse and escorted into the hospital and to where Karen was resting. They were told together that the CT scan had identified a mass on Karen’s brain. The scan results were sent to the specialist team at Queen’s Medical Centre Hospital in Nottingham for further analysis. Karen stayed in hospital that night and she was given steroids to reduce swelling and stabilise her sickness.

The next day, Nick was contacted by a nurse who told him to come into the hospital as soon as he could despite the Covid restrictions. Karen was in a side room off the ward by this time and they were told that, following a further MRI scan, she had a mass across her left and right frontal lobe which was thought to be a Glioblastoma.

Nick said: “The tears were uncontrollable after I left Karen and I made my way back to the car. I didn’t know what to do or who to talk to. I tried to be strong and to make Karen smile but, like a jigsaw which had fallen to the floor, I couldn’t help but reflect upon our world falling apart into little pieces.” 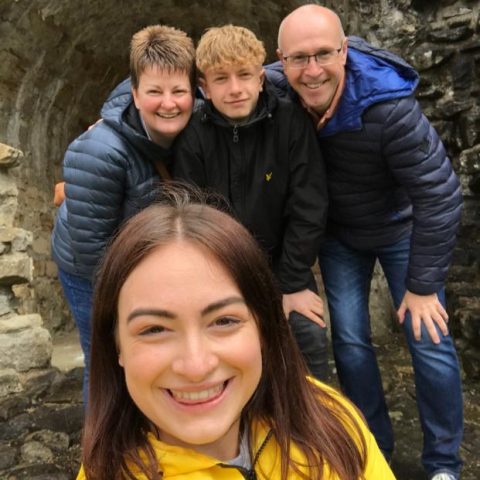 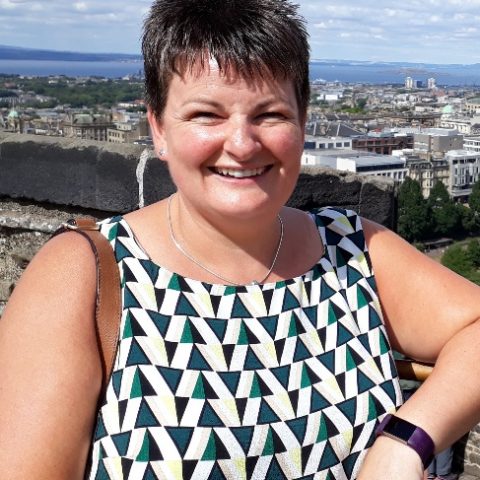 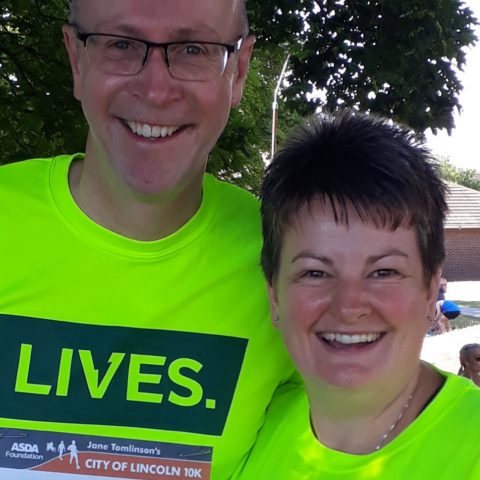 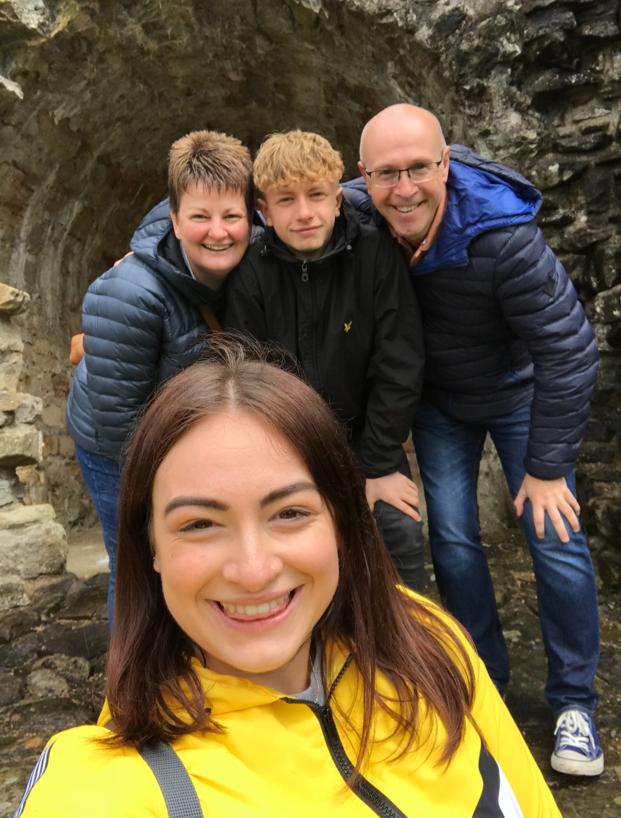 Nick, Karen, Chloe and Elliot loved days out together. 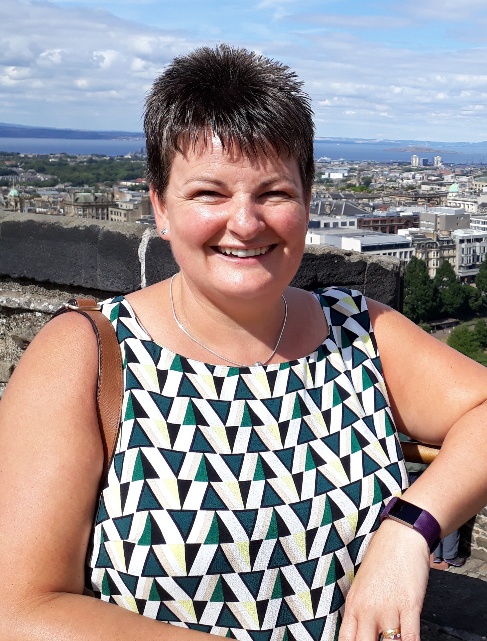 Nick sorely misses Karen who was the love of his life. 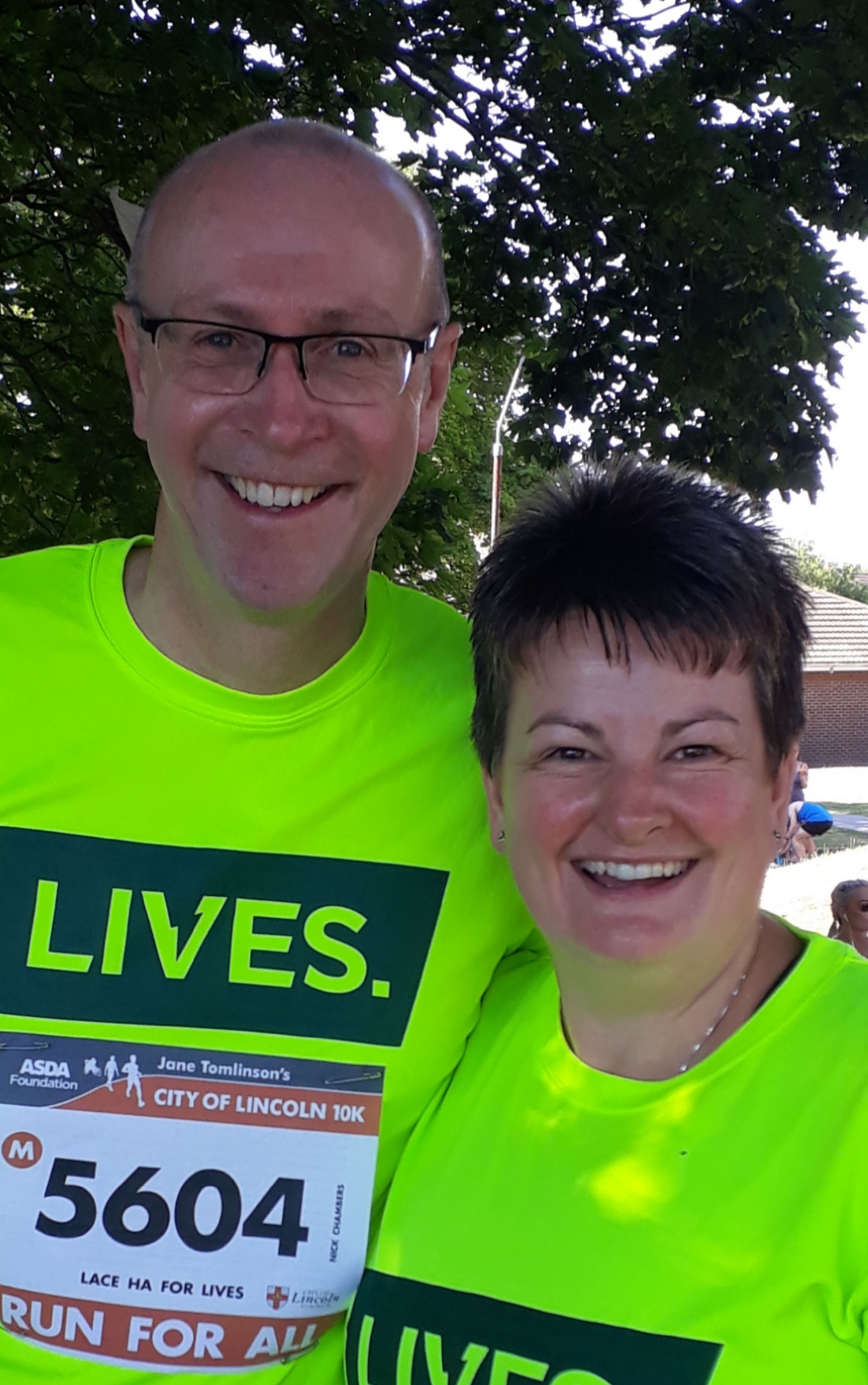 Nick and Karen spent much of their time taking on fundraising challenges.

Karen was referred to the neurology team at Queen’s Medical Centre in Nottingham and she attended an appointment eight days later. She later returned to the hospital to have a biopsy following a negative Covid test which confirmed that the tumour was a Grade 4 Glioblastoma. Karen was given just 3-6 months to live.

Karen was offered limited treatment, such as chemotherapy or radiotherapy, but she declined it. Nick said that quality of life was more important to Karen than quantity of life and she didn’t want to spend her final days going to and from the hospital.

During that appointment at the Queen’s Medical Centre, Nick and Karen were given some information from The Brain Tumour Charity. Nick then also visited the Charity’s website as he tried to understand the hugely aggressive nature of his wife’s tumour.

Nick said: “The Brain Tumour Charity became the main source of information following that visit. I have found engaging with The Brain Tumour Charity to be both effective and supportive. The Charity are aware of the impact of such a devastating disease and their team really know how to respond to those whose lives have been devastated by it.”

Over the next three months, Nick was signed off his job as CEO of a housing association so that he could care for Karen at home. Whilst they did consider a place at the local hospice, Karen’s rapid decline in health prevented admission. They had support at home from the District Nursing Team and Macmillan Cancer Support which the family highly praise. Nick also cared for Karen as she became decreasingly mobile and needed help to wash, dress and feed herself.

Covid restrictions also meant that it was difficult for Karen’s family and friends to visit her at home as she struggled to use the stairs and they were not allowed inside the home in accordance with Government guidelines.

They spent as much time together as possible and they watched her favourite shows and films including ‘Downton Abbey’ and ‘Pretty Woman’. They also slept in the same bed for as long as possible but a Macmillan nurse arranged for a hospital bed to be put in the family’s spare bedroom days before Karen passed away. Nick spent the night sleeping on the floor next to her instead.

It was all too soon that the nurse visited and informed Nick that Karen was near to her end. Just three months after her diagnosis, Karen passed away in Nick’s arms.

Nick said: “Although it was the most difficult thing I have ever seen or had to do, I told Karen that I loved her very much but that it was time to go. Since Karen’s passing I have often found myself in a very dark place and have had to dig deep and find that inner strength. With the support of my family, I have begun to piece together my life and my priorities have changed as I try to do the role of both parents.”

“Our holiday home in North Yorkshire is very much ‘Karen’ and I feel very close to her when we visit there and go walking in its surrounds. I am getting used to spending time on my own, although, I often feel that Karen is there, sat beside me enjoying the tea and cake. Karen had supported me for 32 years and we had recently celebrated our Silver wedding anniversary.

“There is simply not enough knowledge or awareness of brain tumours and the huge amount of damage, distress and horrific chaos they cause – even amongst the medical community. Some staff didn’t appear to appreciate that Karen’s brain tumour prevented her from being able to fulfil tasks. Compassion and understanding was sometimes missed.”

Karen and Nick’s daughter Chloe said that she will miss spending evenings with her mum watching 1980’s films with some chocolate and a gin and tonic.

She said: “I was so confused and filled with sadness and shock when mum was diagnosed. I had never heard of the brain tumour before so I didn’t understand what was happening which made everything so much worse. More education on brain tumours would be great – learning about them and how they can affect people and their families would be so beneficial. The more you talk about brain tumours then the more you understand and can support each other should it happen to you or someone you love.

“Of course, I miss Mum so much – especially her smile and hugs because they always seemed to fix everything even if it was just for a minute. Her ability to light up a room with her smile was incredible and I will forever hold that in my heart.

“As a family now, it’s so important for us to keep in touch and make the time for a text or a video call to chat through what’s going on in our own lives and how we’re feeling. It’s also important to keep talking about all of the different times we spent with her and to keep her alive in our memories that way.”

Nick is now trying his best to adjust to life without Karen and appreciate the precious life that they had together.

He added: “Now, there’s a huge void in both my life and the lives of the two beautiful children we were blessed with – I see Karen in them both every day. I miss and love her so much. Although I have come to terms with her passing, life is so different now and I don’t know what the future holds. I just take one day at a time, put on a brave face, dig deep for that inner strength and try and make it through the day.”

You can help to find a cure.

The Brain Tumour Charity is determined to beat brain tumours of all types, including the most aggressive type of Glioblastomas.