A husband and dad-of-three who has a brain tumour turned his radiotherapy mask into a piece of art to commemorate his life changing experiences since his diagnosis.

In May 2017, Matthew Barber, now 49, from Bourne in Lincolnshire collapsed when he was at home with his family. He woke up early one morning to get a drink of water when his wife Libby heard something smash so she rushed to help and found Matthew lying on the floor with his head cut open.

Matthew had experienced no known symptoms of what would later be diagnosed as a brain tumour prior to this shock incident. He had recently been having various tests and investigations, including CT scans, for lymphoma and he frequently felt cold, shivery and had been losing weight but there had been no real indications of a brain tumour prior to his collapse. In fact, Matthew had run a half-marathon less than a week before it happened.

Libby called an ambulance and Matthew was rushed to Peterborough Hospital and Libby was told to bring an overnight bag as they expected that he would be kept in hospital due to the head injury. However, Matthew had a gran mal seizure in the ambulance as a result he was intubated, placed in an induced coma, and taken for a CT scan as soon as he got to the hospital. But the tumour was not found.

The medical team thought that Matthew had a major stroke and, whilst he was in intensive care, Libby was told to expect the worst as they were concerned that Matthew would not recover. He was transferred to Addenbrookes Hospital ahead of an emergency craniotomy to relieve the pressure on his skull.

He spent 3 days in an induced coma as the doctors continued to treat the incident as major stroke. The brain tumour was only discovered a few days later when Matthew had an MRI scan to check the swelling. When the doctors woke Matthew up, there was no neurological deficit which they had expected to be the case. Matthew was then diagnosed with a Grade 3 Anaplastic Astrocytoma on his right temporal lobe.

Matthew said: “The doctors were very confused with what was happening to me. A brain tumour was not even considered for a few days. I believe that I should have had an MRI when I was first in A&E – this would have identified the tumour and meant a very different experience for me.”

“We were all in a complete state of devastation and shock when I was diagnosed – our friends and family were a great support network to us all and the schools really helped the children through this traumatic event.”

Due to the size and location of the tumour, surgery was too risky and therefore not a treatment option. To begin with, Matthew had oral chemotherapy combined with 33 daily radiotherapy sessions followed by 12 months of adjuvant chemo. This meant wearing a medical mask to help keep the top part of the body as still as possible during treatment.

Instead of discarding this mask at the end of the treatment, Matthew commissioned a friend to paint it to resemble a Maori Warrior. The mask is now displayed in a shed as part of a community garden project run by mental health charity ‘Don’t Lose Hope’ in Bourne which Matthew volunteers for.

Matthew added: “The mask provokes many a conversation about the story behind it. When I look at the mask it makes me smile about all the fantastic staff that provided me with my radiotherapy at Addenbrookes. The Maori warrior design makes me feel proud of the journey we have been on as a family. Now, I am always looking forward and not over my shoulder. I feel everyone who has been diagnosed with a brain tumour is a warrior in their own way – so turning my mask into this unique piece of art seemed very fitting.” 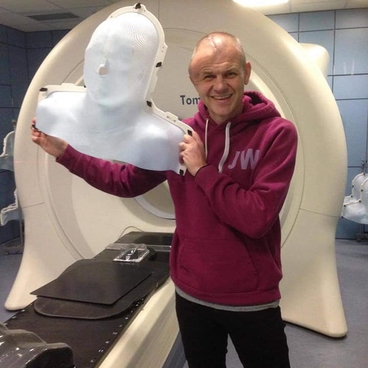 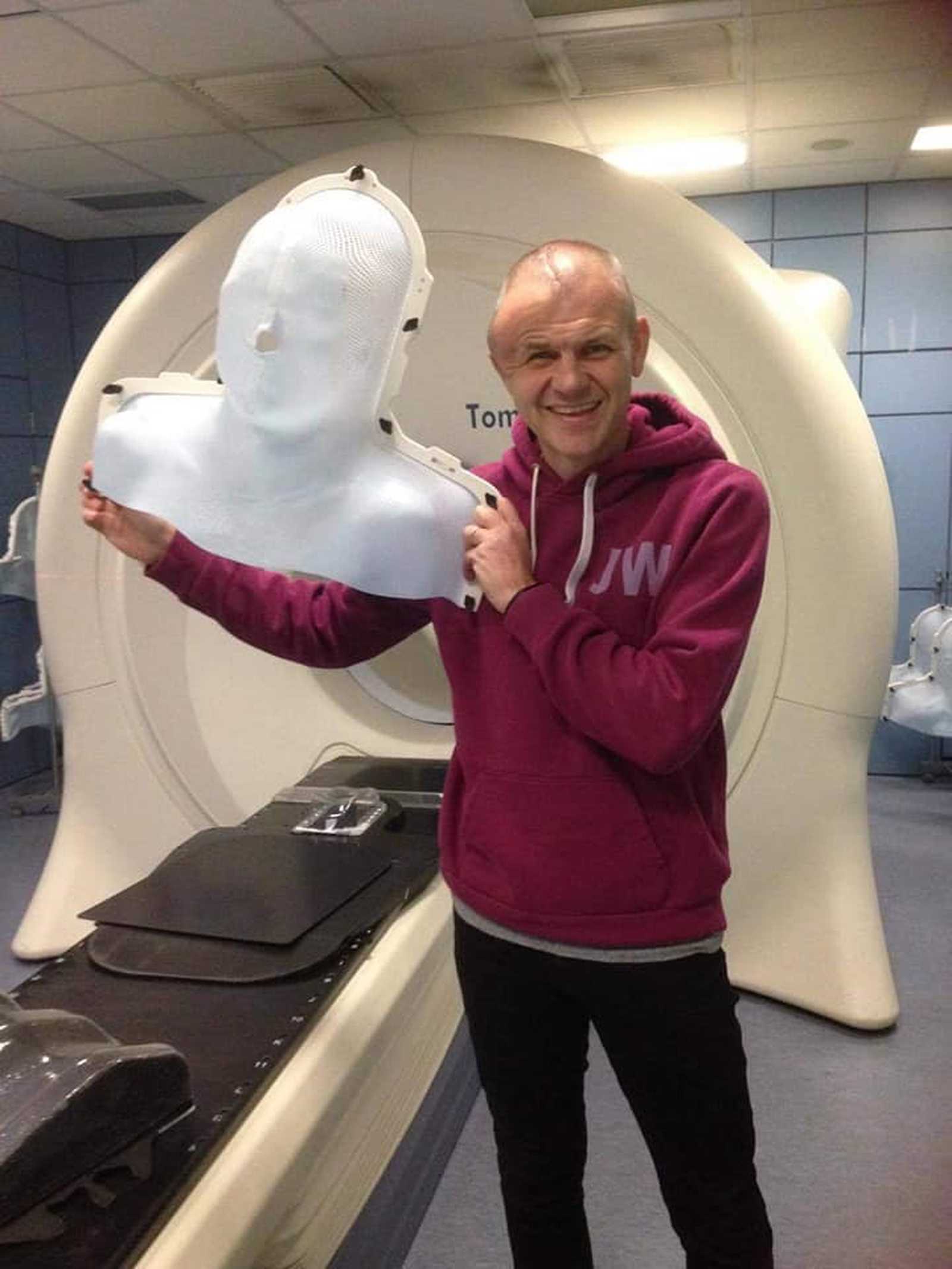 Matt with his radiotherapy mask ahead of his treatment.

Find out more about radiotherapy. 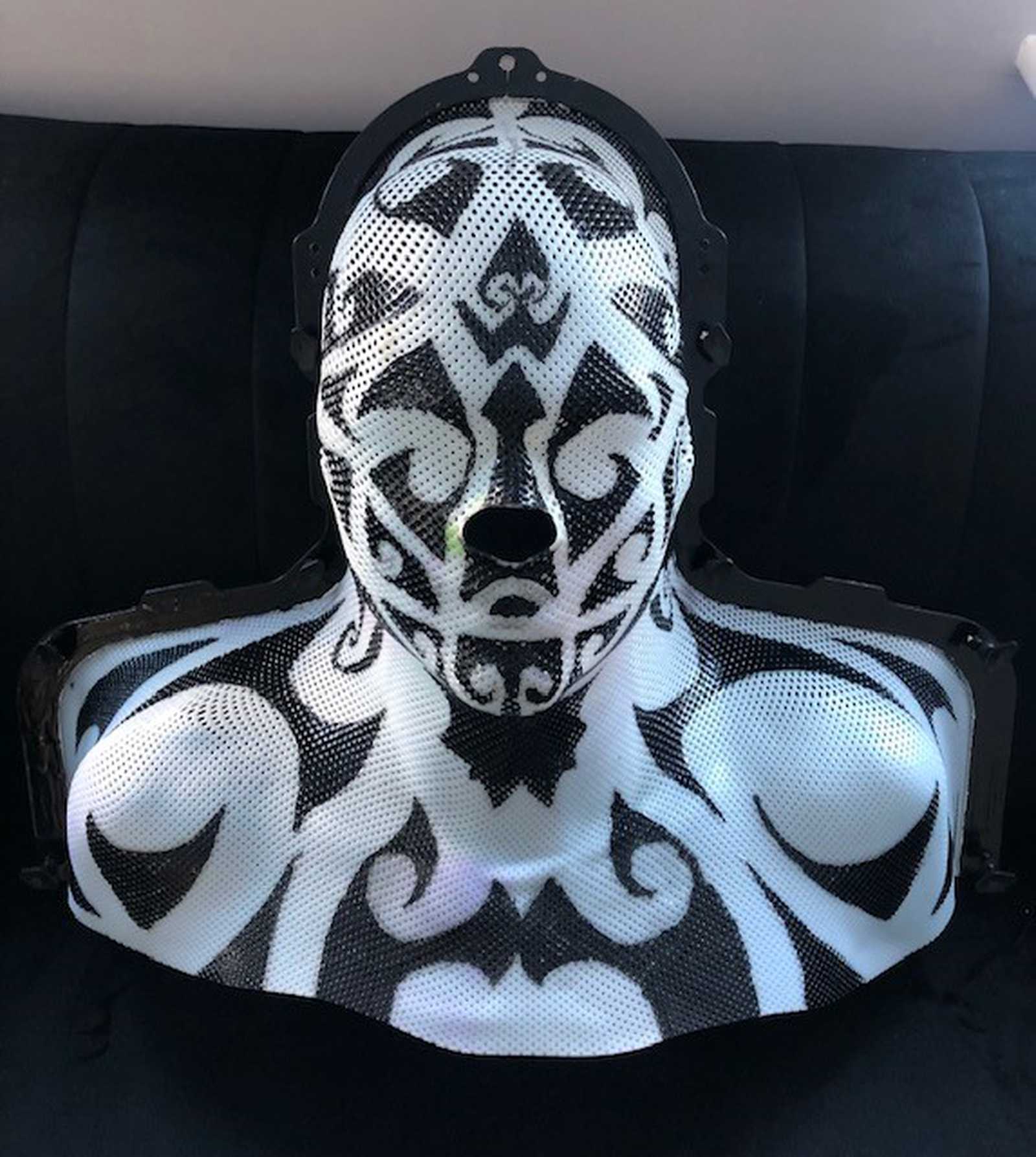 Matt's radiotherapy mask has been turned into a unique piece of work to commemorate his experiences. 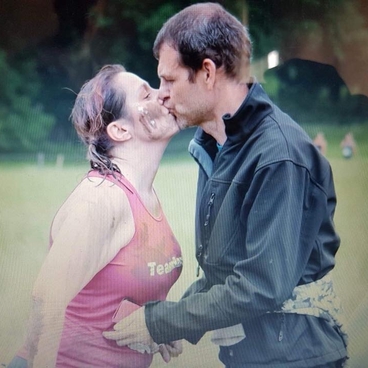 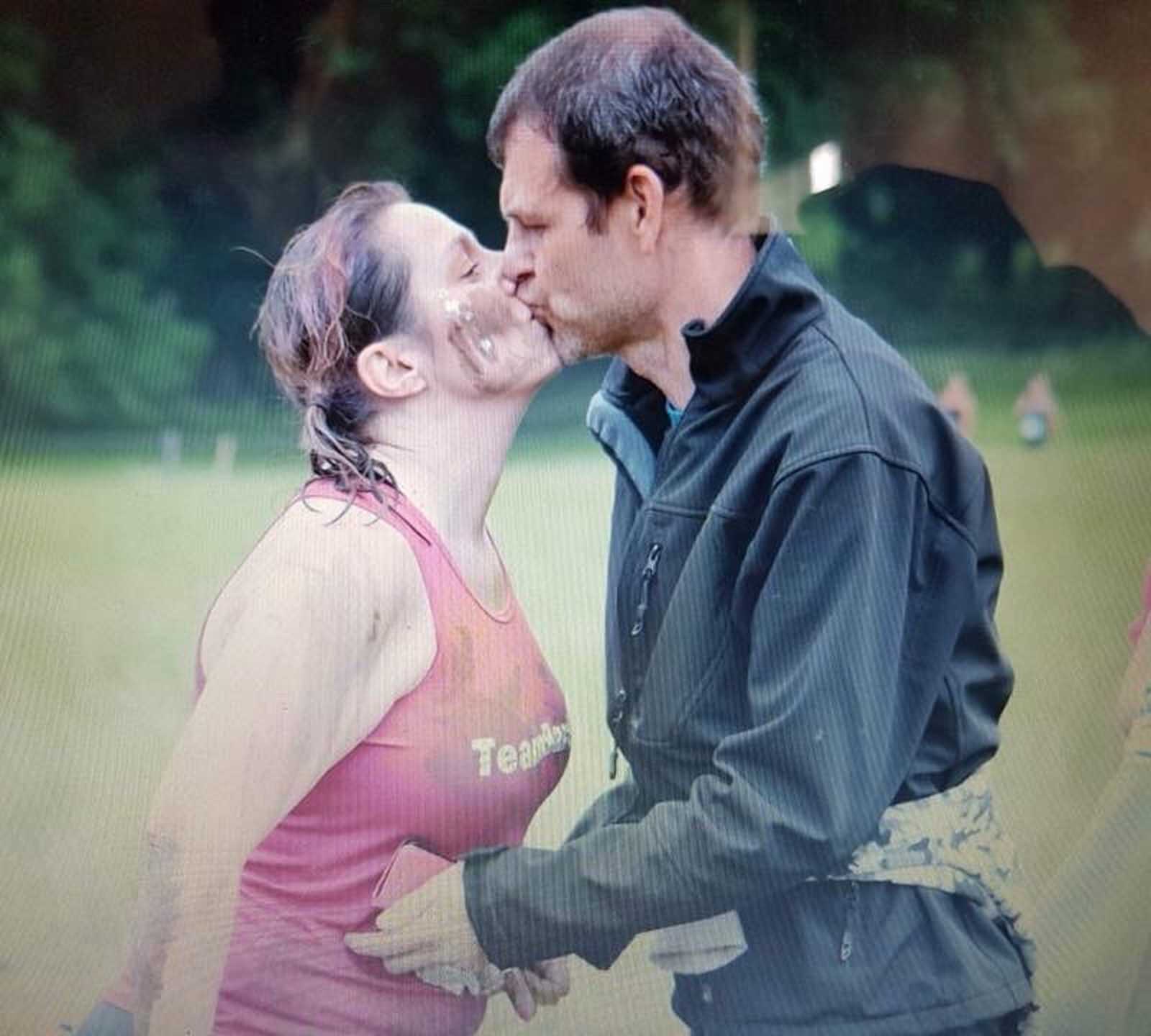 Four years later, Matthew’s tumour is still largely the same size as that which showed up on the first MRI. However, thanks to the treatment, his condition is now stable. He has scans every four months and takes anti-seizure medication to regulate the focal seizures which he has monthly.

Matthew said: “The first year after my diagnosis was such a blur – my family felt it more than I did at the time and I think my poor parents are still in shock. It was only over time that I started to understand what a major impact this would have on my life – not being able to work, drive, drink, play sport, taxi my children to their extra-curricular activities – everything which I loved and lived for in life. It has been devastating and my independence has been taken away by this terrible disease. The uncertainty of not knowing if the tumour would become unstable also took some getting used to, of course.

“Yet, we remain positive as a family unit and strive to continue with life just like we did before the diagnosis. The pressure of working full-time has gone and I now do more housework and cooking than I would have done before. So, the new ‘me’ and our family life is on the right path and long may the stable scans continue. I feel blessed that I am still alive and living life to the max. I am fortunate to have great parents and a wonderful wife, children and friends who have supported me immensely over the last four years.

“A positive outlook since that fateful day has really helped me to deal with our journey. We take every day in our stride and, despite a few twists and turns, the new normal is just as good as the old normal.”

Matthew first heard about The Brain Tumour Charity from the team at Addenbrookes Hospital who pointed him in the direction to find help, support, and advice. Since then, Matthew has volunteered for the Charity and shares his experiences to help guide the Charity’s research funding. His wife Libby has also raised over £2000 through online fundraisers and by taking part in the Pretty Mudder event with her friends.

Matthew’s advice to others who have been affected by a brain tumour diagnosis is:

Find out how we can help and support you to enjoy life following a brain tumour diagnosis.

Living with a brain tumour