More people have walked on the moon!

Inspired by and in memory of his dear younger sister, Emma, who died of a brain tumour in 2003, John is aiming to continuously swim the whole length of Lake Geneva at 42.8 miles in 36 hours, Only 7 people have ever completed what is known as the ultimate ‘trophy swim’ and John will be just the eighth person to do so. More people have actually walked on the moon than have solo swam Lake Geneva. Although this will not be the first time that John has taken on endurance escapades. In 1993 he successfully swam the English Channel on his third attempt and in 2007 John climbed to Everest Base Camp just a year after he had had significant knee surgery.

Training to swim non-stop for 36 hours was severely hampered throughout the pandemic with pools closed and travel to suitable outdoor swimming locations against lockdown rules. John had to be rather inventive with his training methods and took to ingenious methods to continue his training; lying on a raised platform and using rubber tethers to replicate swimming motions with his arms as well as tethering himself to a tree and swimming ‘geo-statically’ in the middle of a deep farm pond (negates frequent switching direction) being one such method! 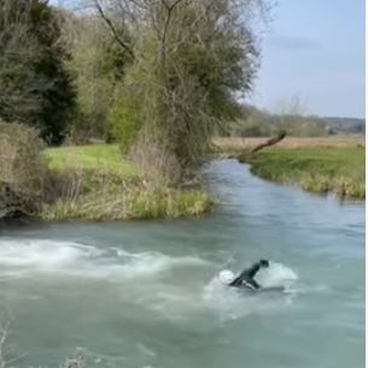 Static swimming in the River Windrush 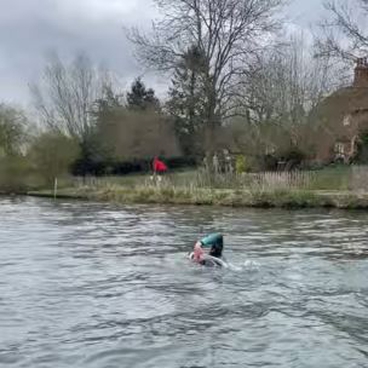 Swimming in the River Thames at Henley 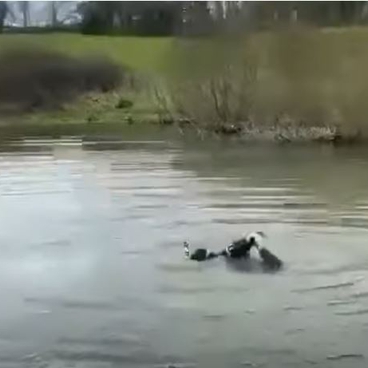 Now restrictions have lifted I have been swimming for two hours each weekday evening in a local pool and undertaking much longer, open water swims at weekends. I have joined the Channel swimmers for their cold water training sessions in Dover Harbour as well as using Lake 86 at Cotswold Water Park to swim long one km laps for hours on end. 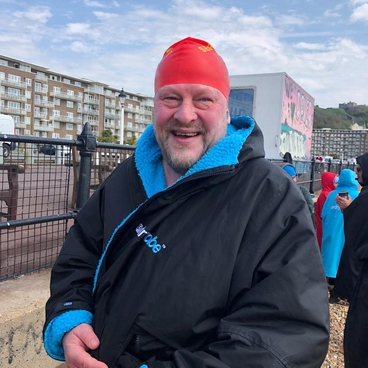 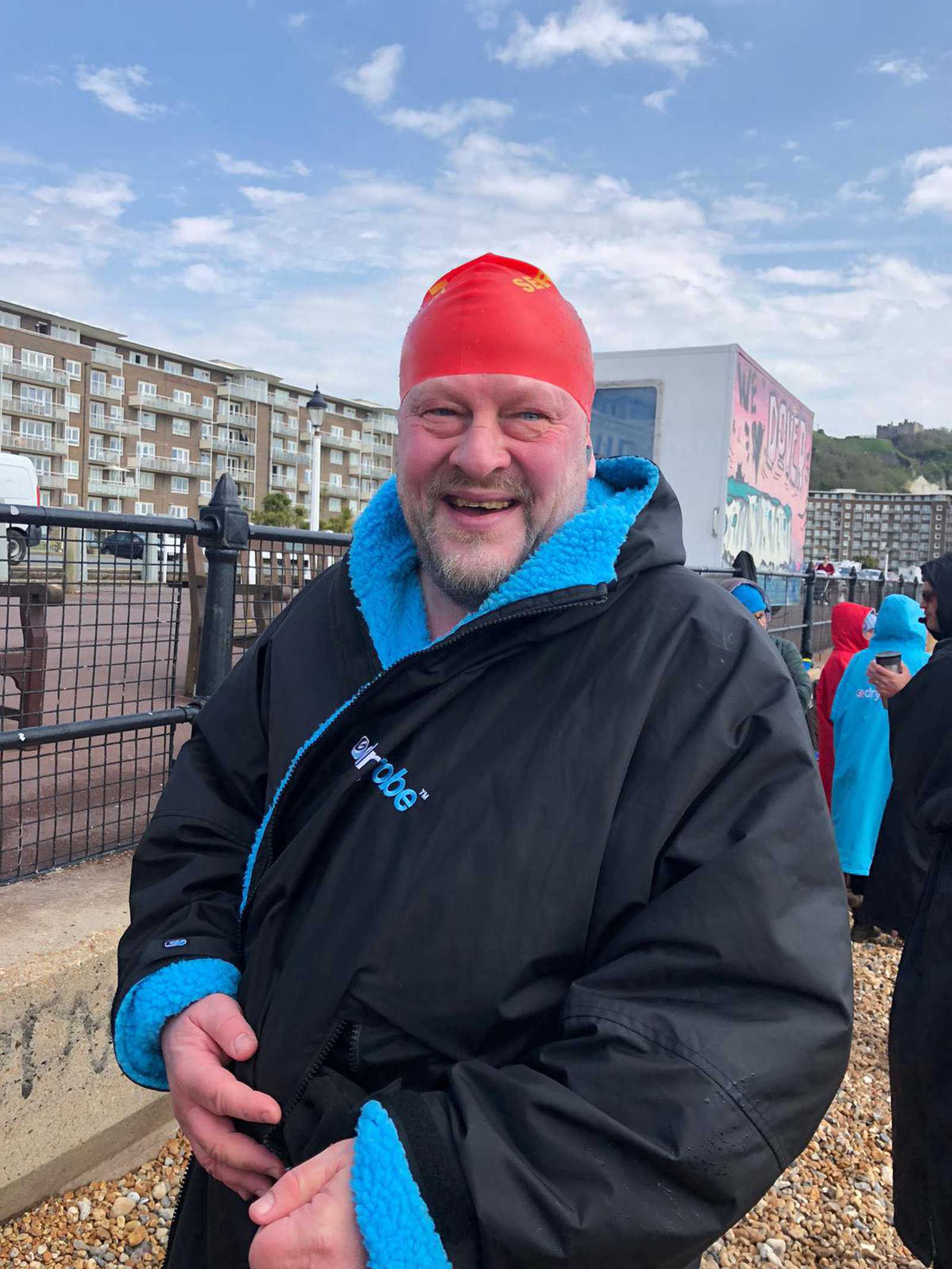 John after a Dover swim 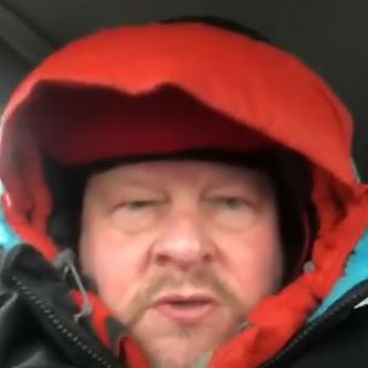 John shivering from the cold after a Dover swim 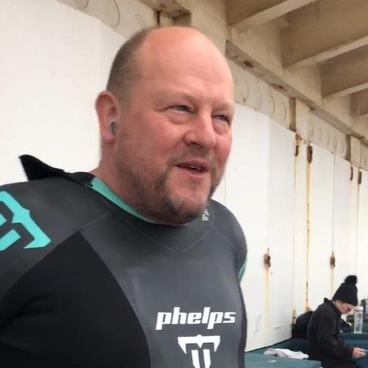 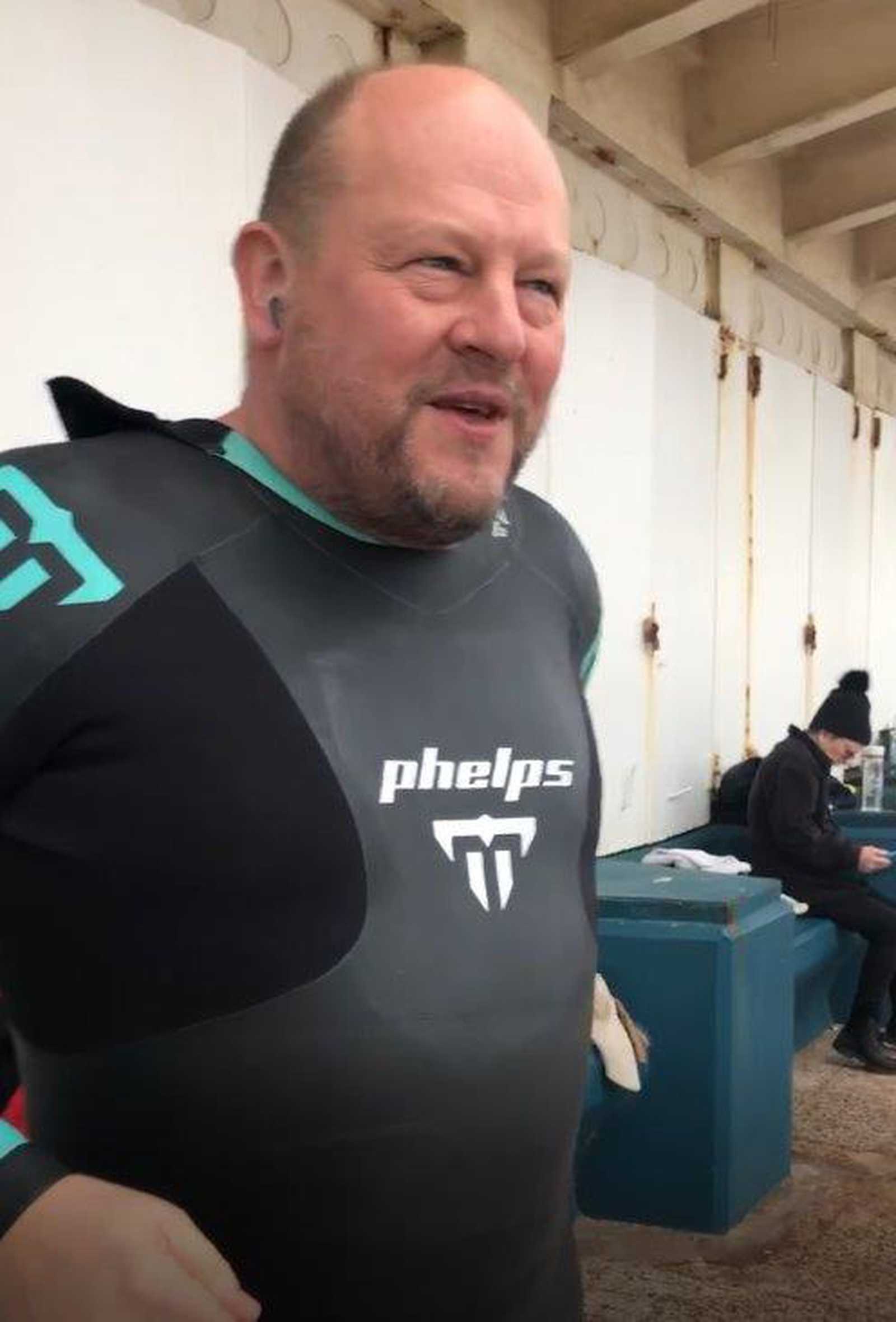 The rules for swimming Lake Geneva stipulate no wetsuit, no stopping and no rest until he reaches the finishing shoreline except for only treading water for a few seconds to take on a carefully calculated calorific mix of carbohydrates, fluid and electrolytes to keep him going for the unimaginable 36 hours.

“I’ll be looking forward to a very large hug from my Sarah and a glass of champagne when I finish! Once recovered, a large fondue or raclette with my support crew would seem appropriate, followed by a very large bar of Swiss chocolate to aid my recovery!”

“During my first attempt I was trialling a new feeding schedule and the quantities I was using were not quite right. After 7 hours on the first day I was quite sick and unfortunately had to stop. It was hugely disappointing to have to get out of the water after 7½ hours in, knowing that I would have to start again to successfully qualify”.

John did indeed successfully qualify the following week, swimming the 10 hours and 7 hours on consecutive days in Lake 86 at Cotswold Water Park and climbing out of the water to flag waving and huge cheers from a support team and members of staff at the lake.

“My qualifying swim seemed to attract a little attention at the lake and some wonderful people using the lake over those days even donated to the cause and were very supportive indeed. It was quite emotional finishing the 17 hours as a small crowd cheered and welcomed me out of the water. My wonderful family and friends loyally support my long distance swims but I always say it is not a ‘spectator sport’. I am always very moved by their encouragement but seeing others join them as I finished was truly wonderful”.

John has had amazing support from family and friends with some undertaking their own ‘solidarity’ events to support John’s swim and raise money for The Charity too.

My Step-Granddaughter, Isla, completed 42 star jumps to support my swim and raised a whopping £1,576!

A very good friend of ours, Allan Winter, undertook at 10km sponsored walk along Beachy Head and raised a brilliant £1,164! 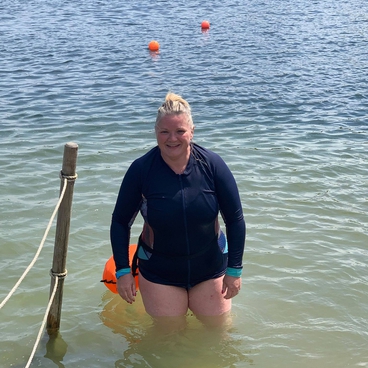 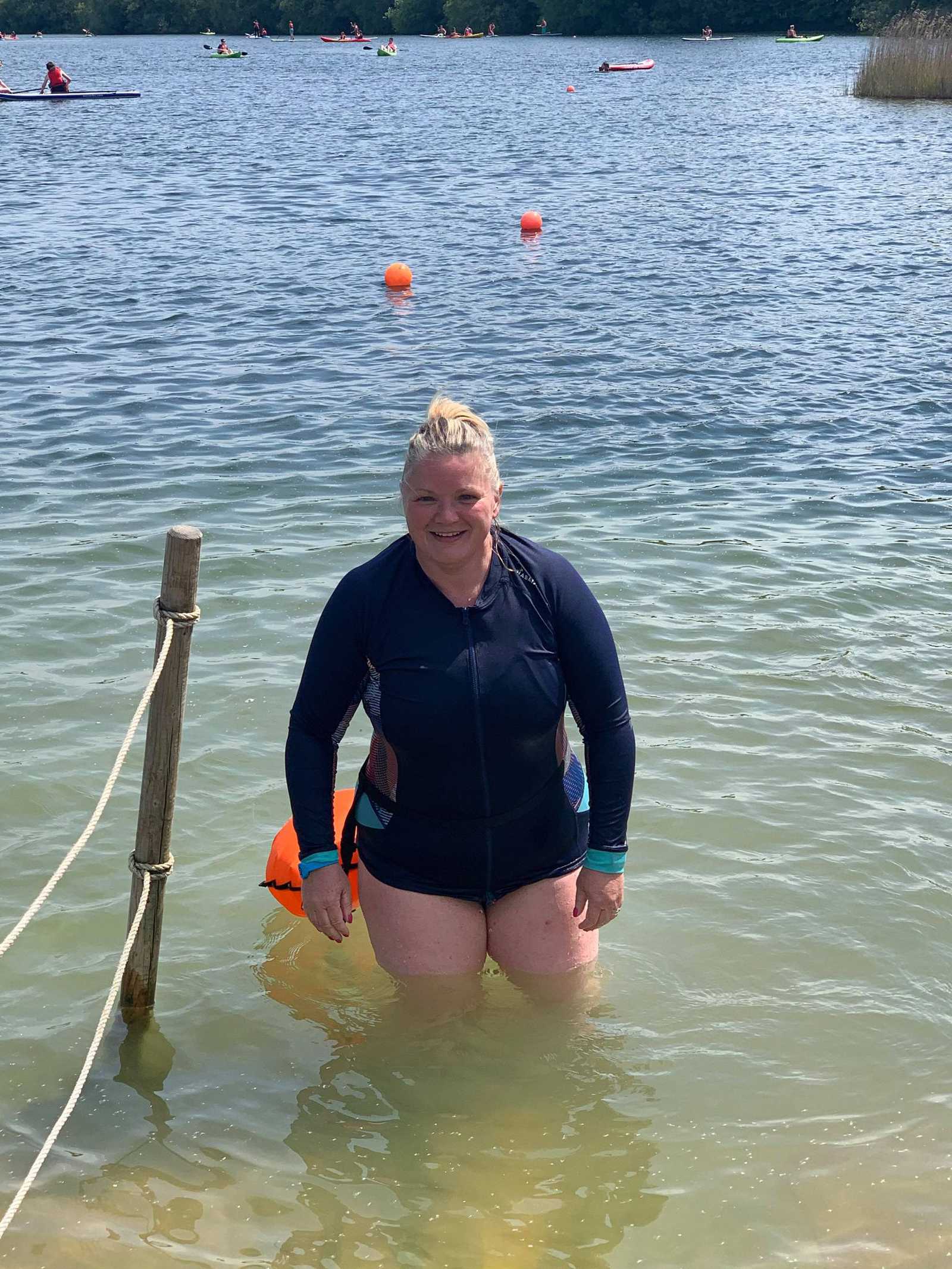 Sally Williams who works for The Brain Tumour Charity is aiming to swim a collective 42 miles to support my swim too.

In addition to the staggering qualifying swim, John has also completed two consecutive days of 10 hour swims in cold Dover Harbour, in sight of channel ferries and cargo ships! Those who wish to swim The Channel complete many hours of training and qualification in Dover Harbour and John enjoys the camaraderie of those training days although he is usually in the water a few hours before and after the others have entered and subsequently left the water.

“The Channel swimmers are brilliant and hugely supportive. There is always fellow swimmers to lend a hand when more Vaseline is required on the areas that rub when swimming!”

Being in the cold water for such lengths of time can make it very difficult to leave the water unaided and to get dressed.

“After a long swim, Sarah usually has to help me get dry and put warm layers on to help get my body temperature back up as my hands are often too numb and I can’t feel a thing! To complete such an endurance challenge you absolutely need someone supportive who takes care of many of the logistics so that you can concentrate on the challenge itself. Sarah is my rock and I just couldn’t do the swim without her. I am certainly very lucky indeed.” 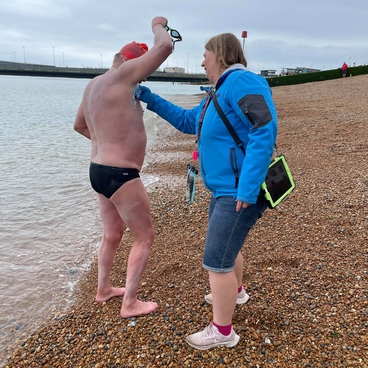 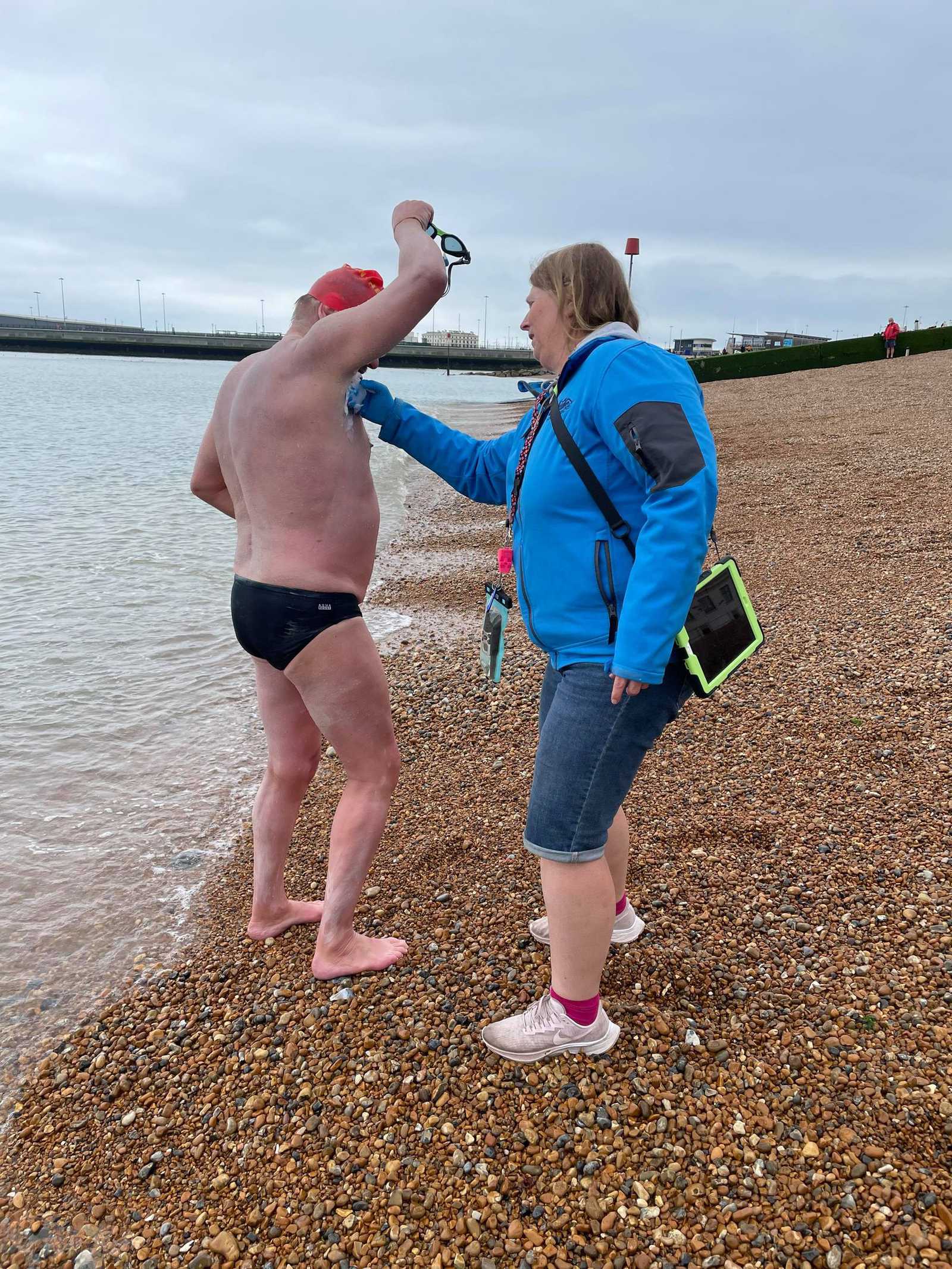 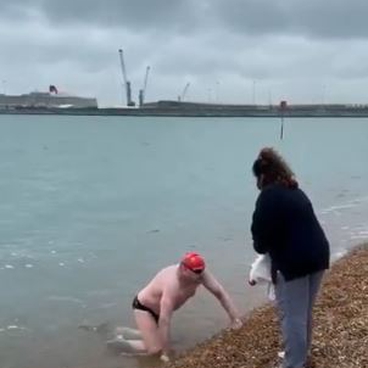 After a 10 hour swim in Dover Harbour 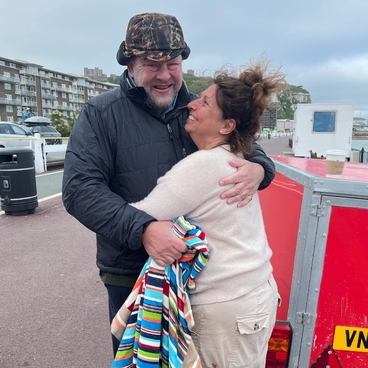 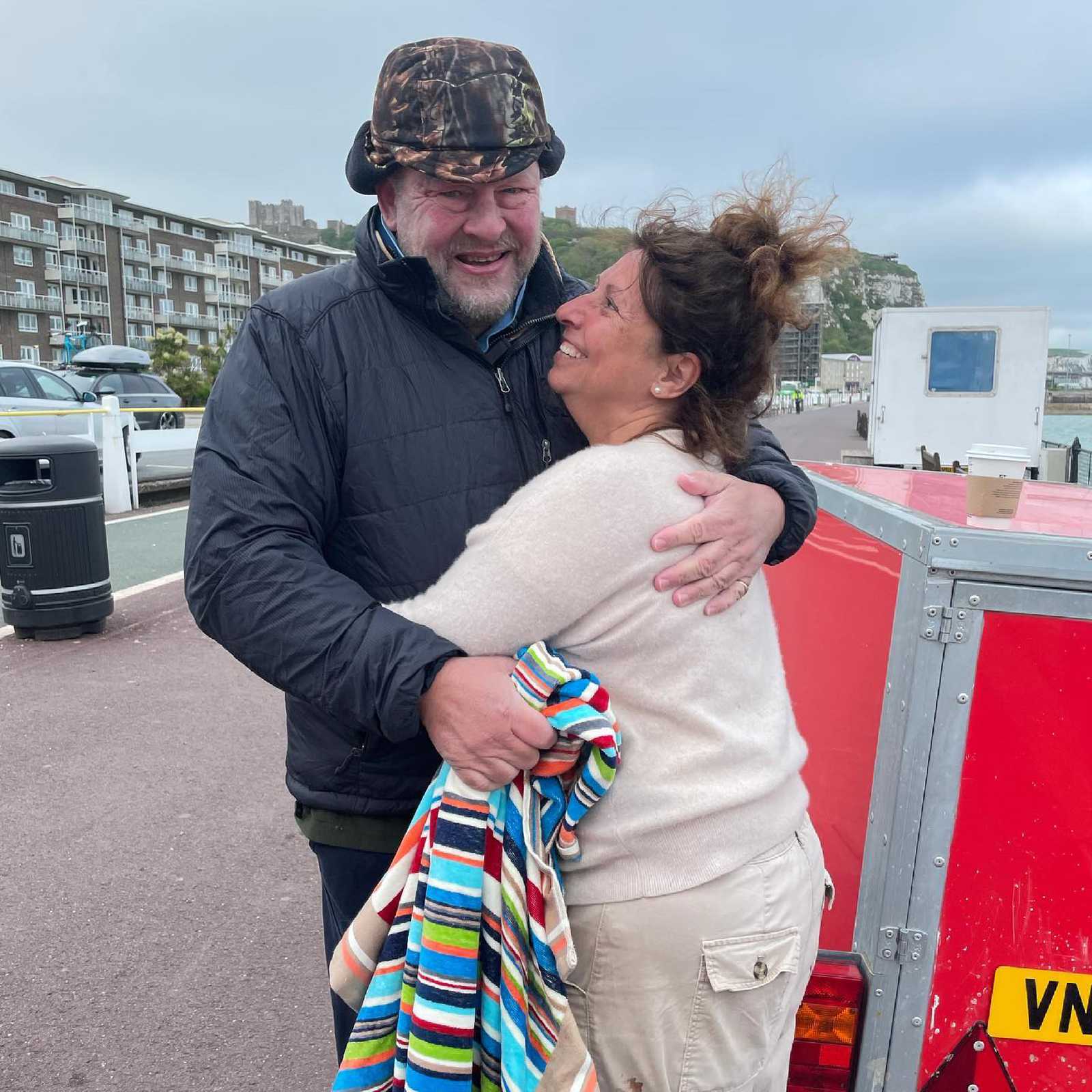 John and Sarah after a 10 hour swim in Dover Harbour

Looking to the Lake Geneva swim, aged 56, John will be the oldest to complete the swim by 14 years. As well as preparing his body physically for the epic feat of endurance, the intangible mental preparedness should also not be underestimated. Sensory deprivation, constant pain and exhaustion are all aspects that John has been conditioning his brain as well as his body for.

I am determined to finish the swim in memory of my sister. There was very limited treatment available to her when she was diagnosed and quite frankly little has changed in 17 years. She did have a brain operation but that just added three rather poor-quality months to her life.

“One distinguishing feature about my sister Emma was that she was loved and liked by everyone that she met. On the Venn Diagram, that puts her with a big overlap with the angel category. Nobody ever had a bad word about her. Mind you, I think that is also true of our mother.” 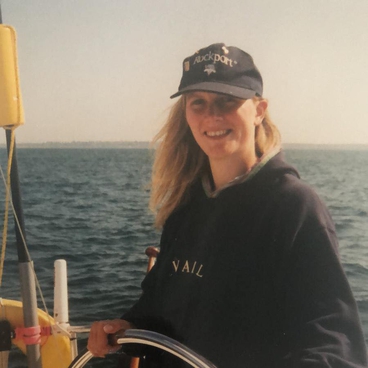 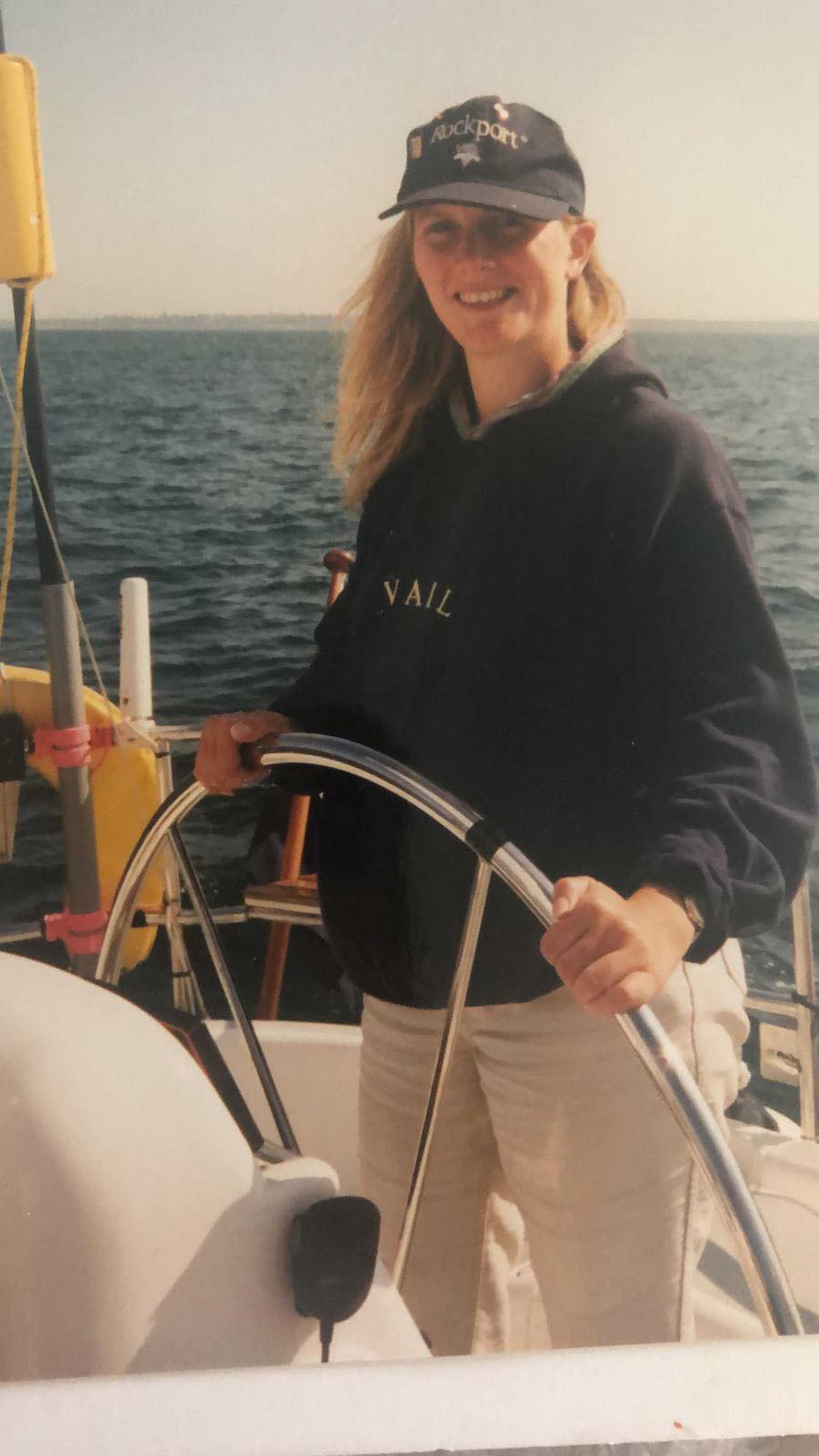 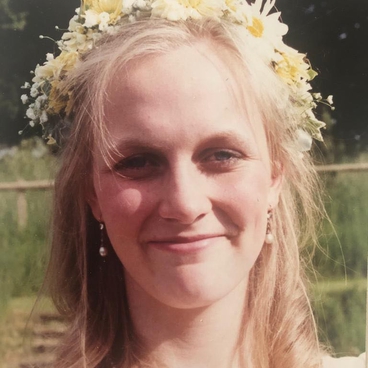 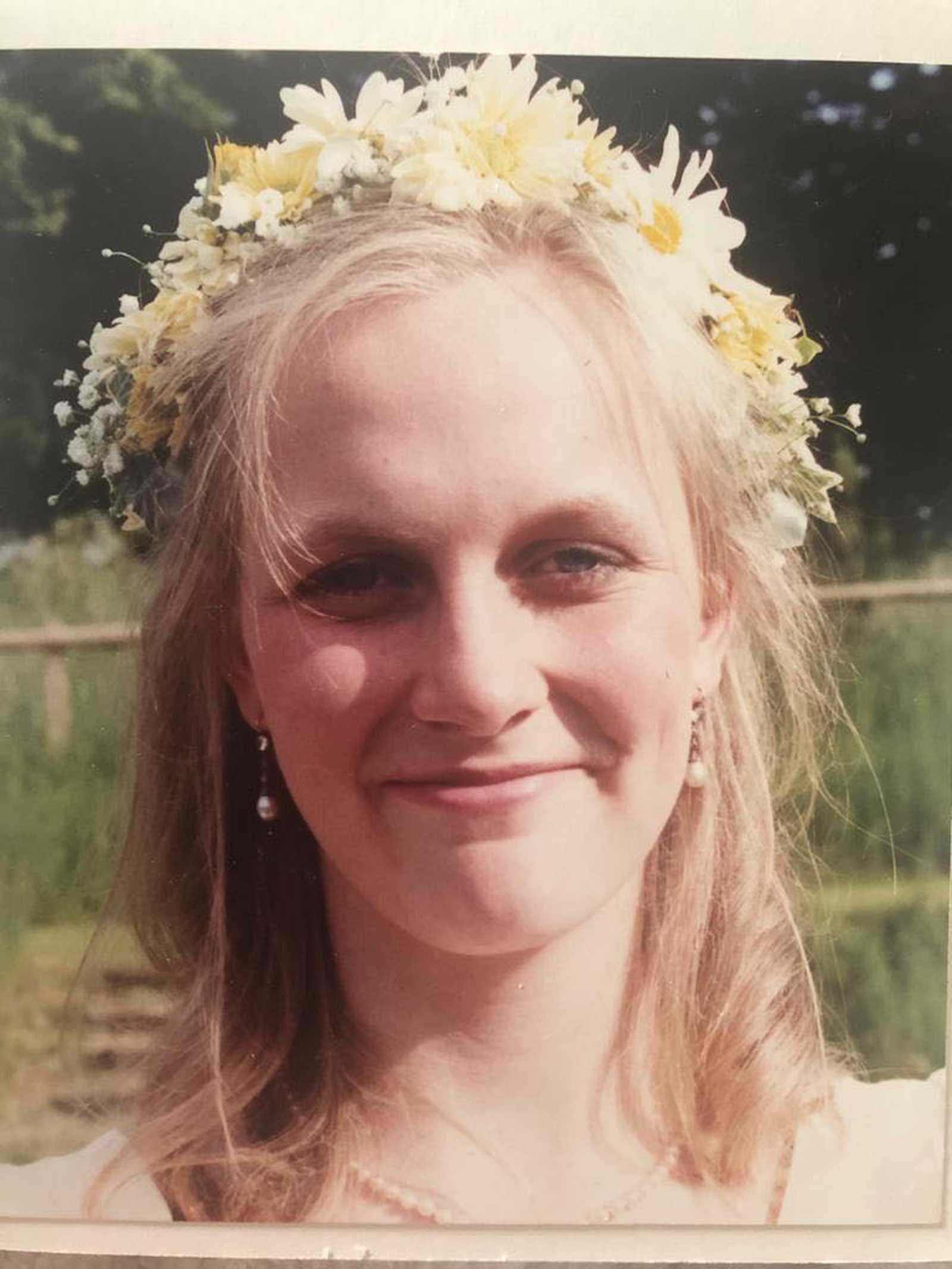 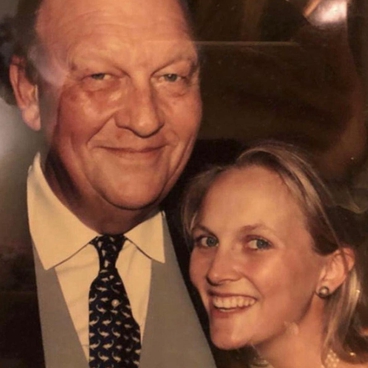 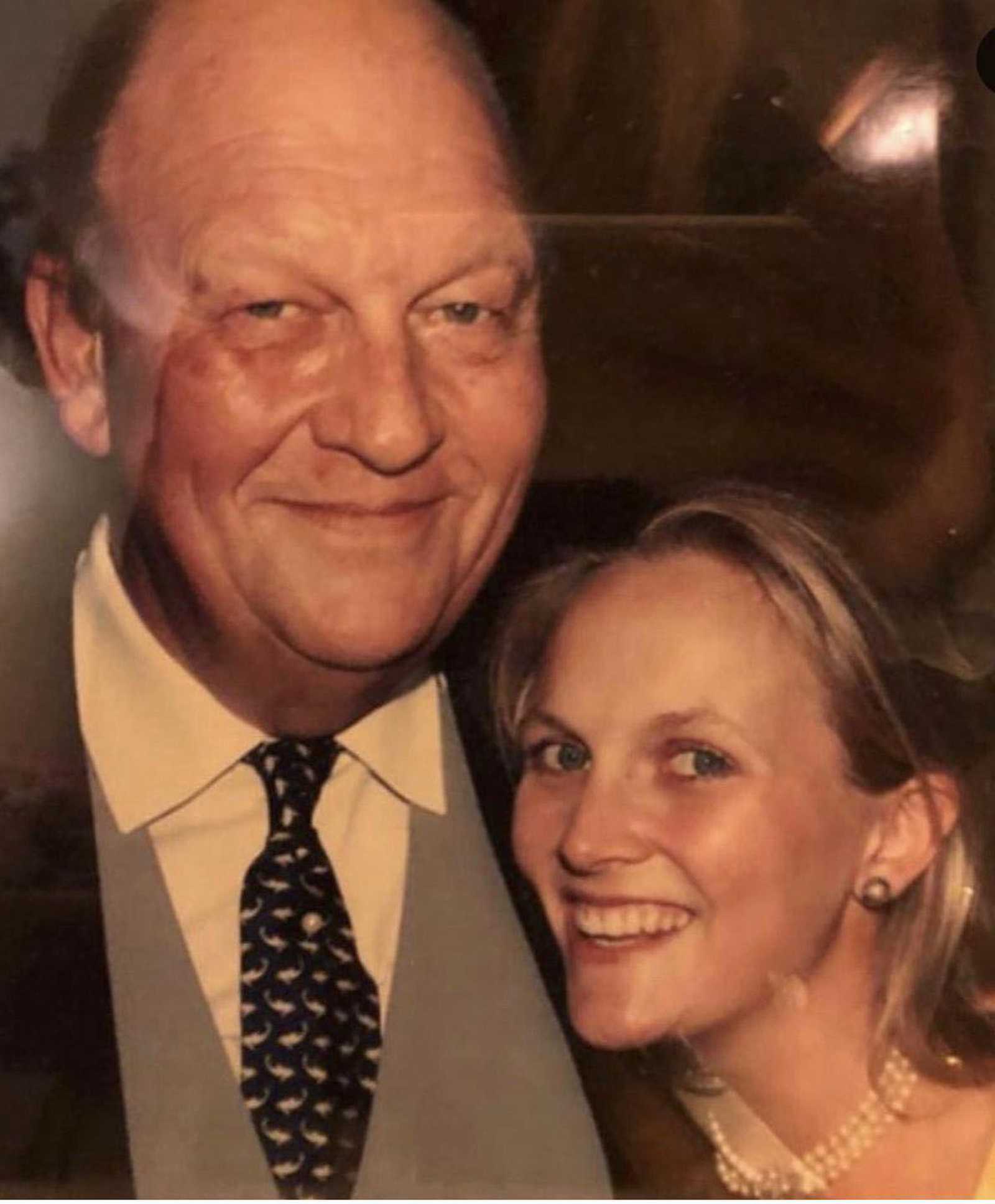 John is also inspired by the loss of a friend and colleague, Geordie Kidston and is motivated to get fitter, do something worthwhile and make a difference.

“Life is certainly for living and if I can make a difference during my lifetime, I’ll be very happy. Research into brain tumours is expensive and I know every penny of the money raised will make a difference, helping to find a cure and kinder treatments for the disease. Things just have to change for this woefully underfunded cancer.”

“I’m pleased to be supporting such a brilliant charity who are making real impact every day.”

"I’ve had such humbling, kind and generous support for my swim so far which means a great deal to me in memory of Emma and really warms my heart. I just hope that emotional warmth transfers to its physical equivalent when I’m in the water and need a boost.” 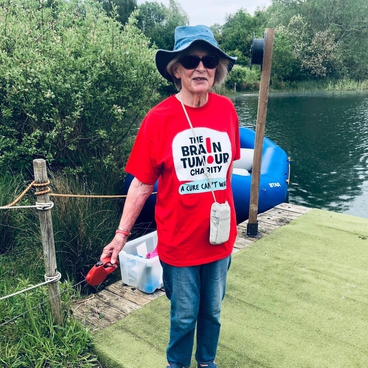 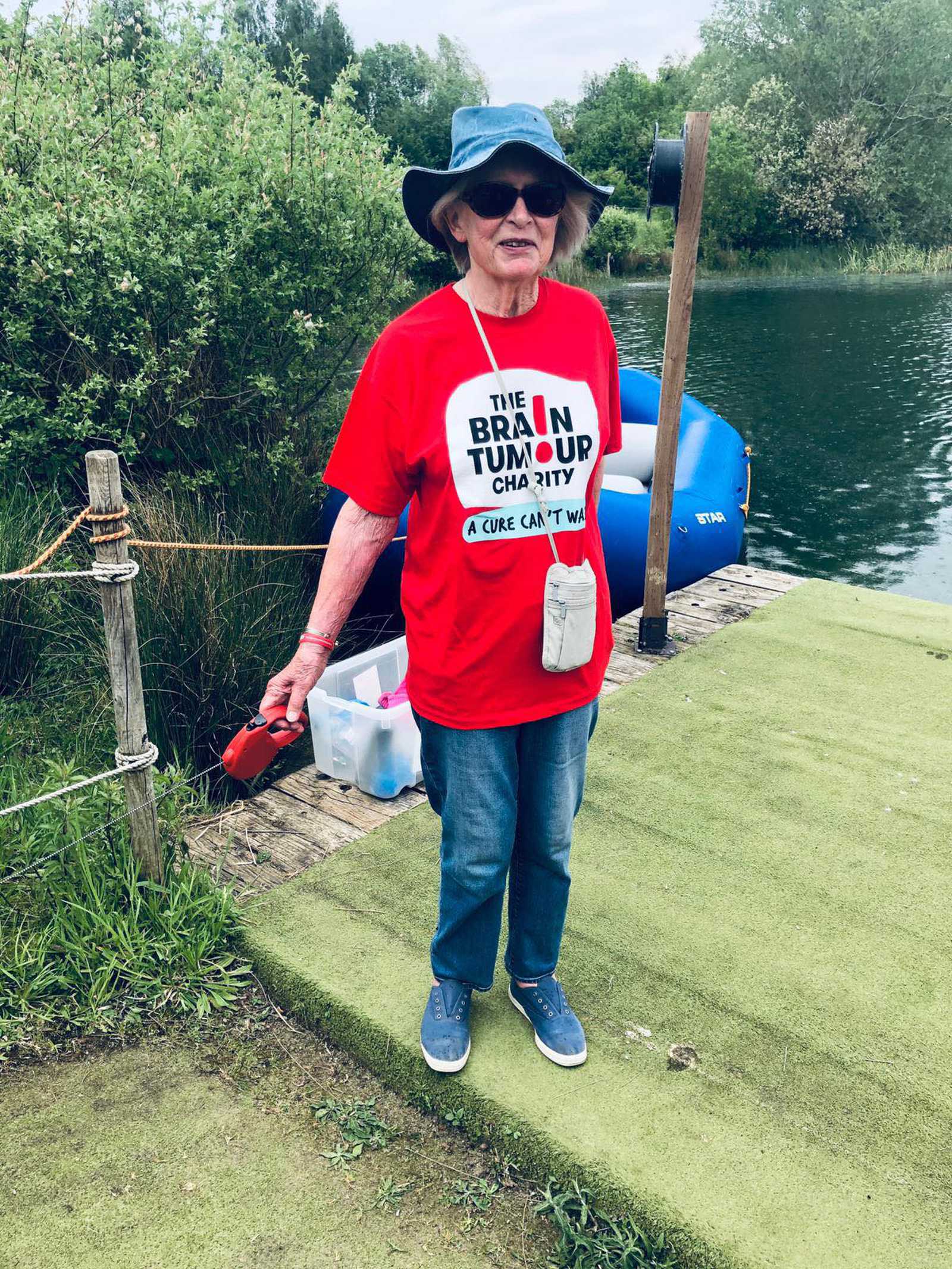 My Mother, Dido, thinks I’m rather mad but always comes out to support. 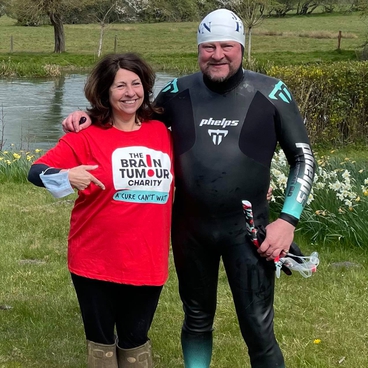 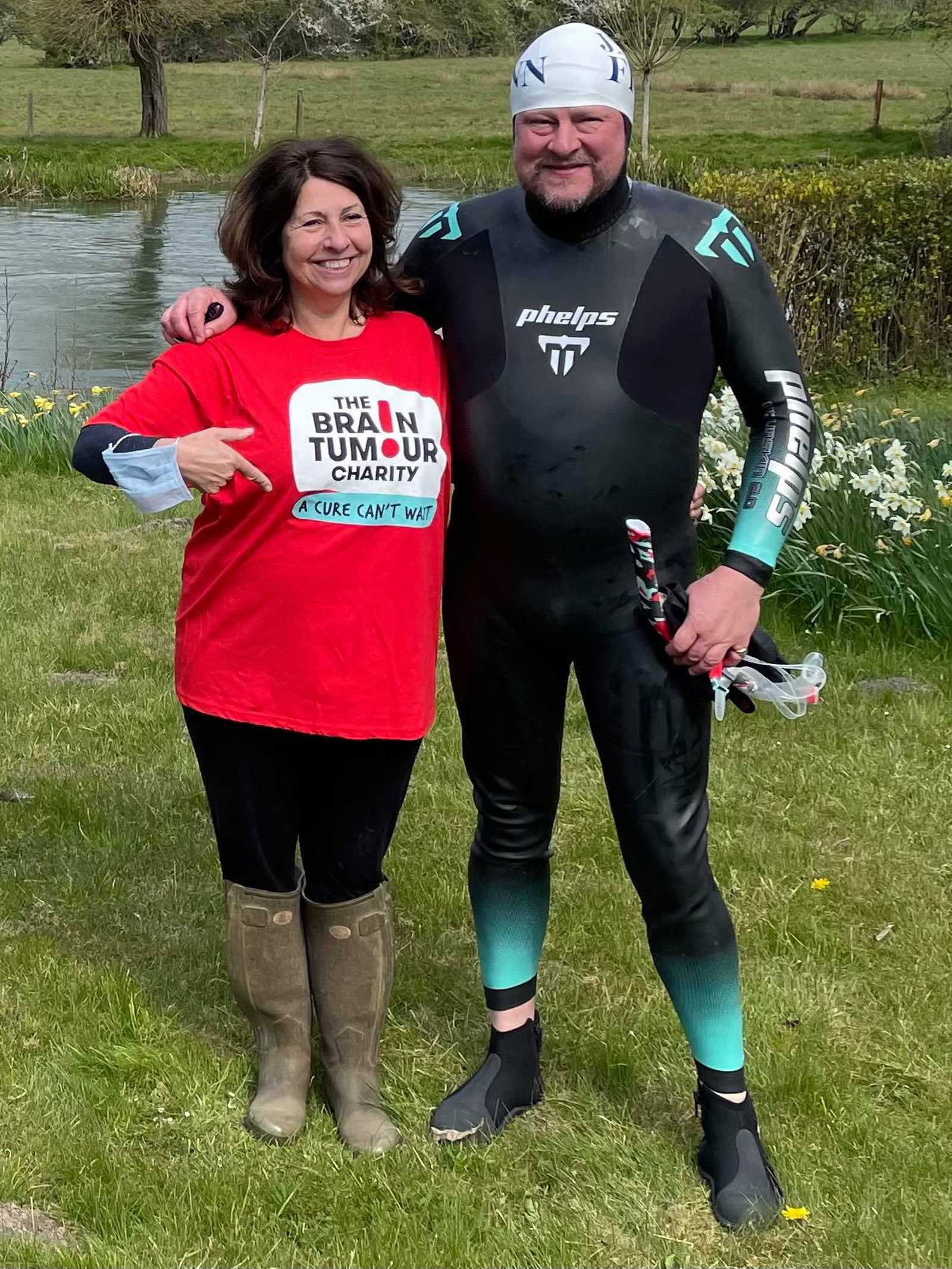 Even Lily and Holly, our two Patterdale Terriers come out to support

Come on John, you can do it!

You can follow updates from John’s training and swim itself through the social media links below:

Help spread the news of John’s challenge by liking and sharing his social media posts. To date, John has raised over £265k and there is still time to go before the swim. You can also follow John’s quite remarkable fundraising at his Just Giving page.

We would like to wholeheartedly thank all of the brilliant corporate sponsors who have so very generously supported John’s Mad Swim, including Atrato Capital Ltd, The Syncona Foundation, JM Finn and 2Xideas.

If you are considering or would like to discuss a personal or corporate donation to John’s Mad Swim, please contact sally.williams@thebraintumourcharity.org