One typical Thursday in 2014, Suzanne Davies, now 43, from Aberdeen was struggling to understand a new system in work which she had been trained to use over the last couple of weeks. Then suddenly, she lost the ability to speak for a few minutes. Suzanne went home feeling progressively unwell. She continued to have problems with her speech alongside headaches and she also struggled to move around as she usually would.

She woke up on a number of occasions over the next two weekend nights with the sensation that she was unable to breathe, which was similar to having a panic attack. She made notes on her phone so that she could describe all that she had been feeling when she went to the GP on Monday.

But at the appointment, Suzanne was unable to read it out so the GP looked at the notes herself instead. Suzanne would find out a few months later that her GP suspected that she had a brain tumour as she was displaying all the classic symptoms of the disease, which is the number one cancer killer amongst those under 40-years-old.

The GP advised Suzanne to go straight to A&E at Aberdeen Royal Infirmary and it was then that the GP’s suspicions were confirmed. A CT scan revealed a mass, which was the size of a golf ball, on her brain. She chose to have an awake craniotomy just a week later to remove it. A speech therapist was with Suzanne throughout the operation to help minimise any risk of long-term problems with Suzanne’s speech.

Tests later confirmed that Suzanne had a Grade 4 Glioblastoma, which is one of the most aggressive types of brain tumour and typically has a prognosis of around 12-18 months with effective treatment.

Suzanne said: “I was worried about the kids as they were only four and seven years old at the time. So, I just did what I had to do and tried to think positive about it all. I think those around me have probably found it more difficult than I did. My parents were massively shocked, especially as I was only 35-years-old at the time.

“My husband, Owen, has been my ‘rock’ throughout. He has been so brilliantly supportive of me and also of our children. He has taken on day-to-day tasks which would usually be my responsibility and done all he possibly could do to keep me safe.”

At the time of her diagnosis, Suzanne had long blonde hair but she knew that the chemotherapy would undoubtedly mean losing some, if not all, of her much-loved hair. So, she decided to take matters into her own hands instead.

She added: “My hair was starting to fall out in an odd pattern – my head looked like a Chinese Ying-Yang sign. So, I decided to shave it all off. My family and kids – who were so young at the time – got involved too and we just tried to make it a fun experience instead of focus on the sadness of it.

“If someone had told me a month before that I had cancer, that this would be happening and that my hair would come out then I clearly wouldn’t have believed them. But the doctors told me that my hair was all going to come out anyway so it most definitely seemed like the right thing to do.”

Suzanne fortunately made a strong recovery and is proving her prognosis wrong by still living a happy life seven years after her diagnosis. She has regular scans to monitor her condition, which is currently stable. She takes daily medication and also lives life with long-term side-effects of the condition. This includes memory problems, seizures and sometimes struggling to find the right words for a sentence.
She is also currently not able to drive due to seizures and the family are moving to a bungalow to make it easy for Suzanne to move around the family home without having to navigate stairs and risk of having a seizure whilst using them.

Suzanne with her two children. 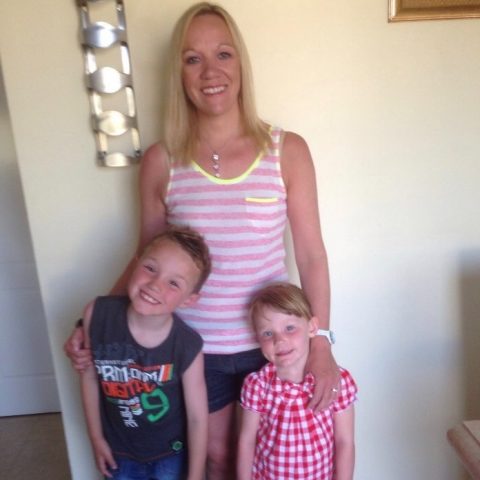 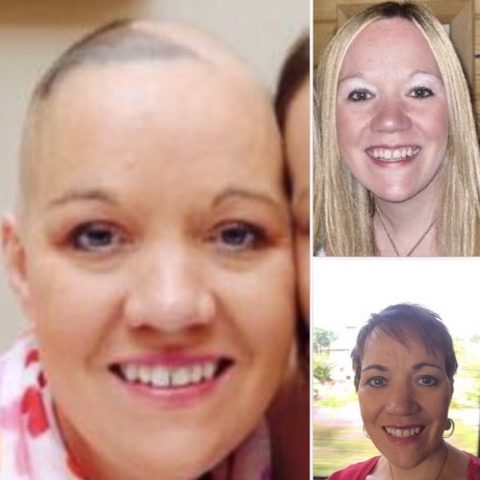 Suzanne and her family. 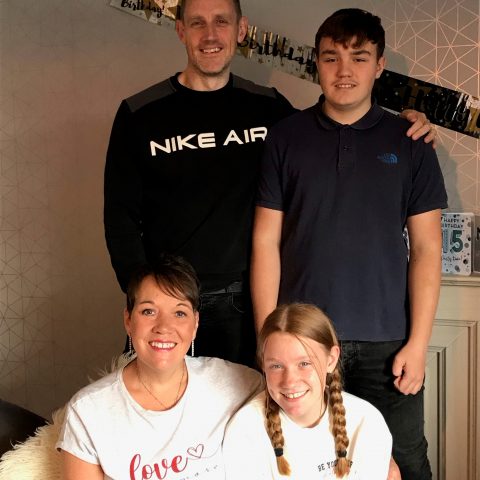 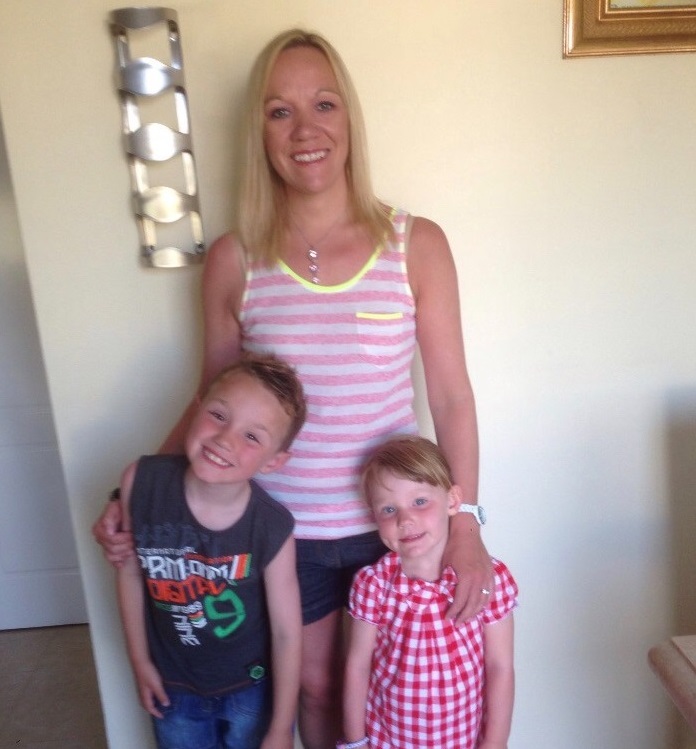 Suzanne has two children with her husband Owen who were only young at the time of her diagnosis. 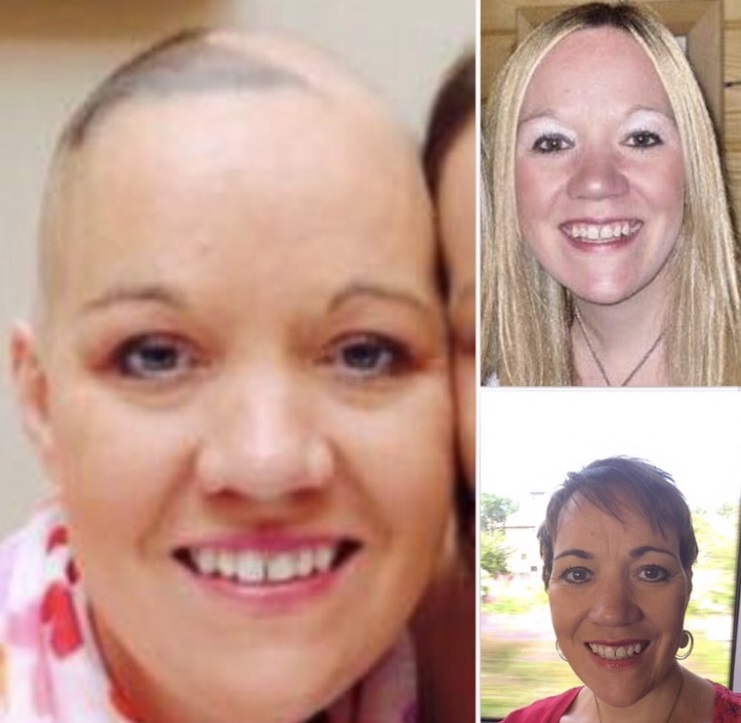 Suzanne knew she would lose her long blonde hair during treatment so she shaved it off instead. 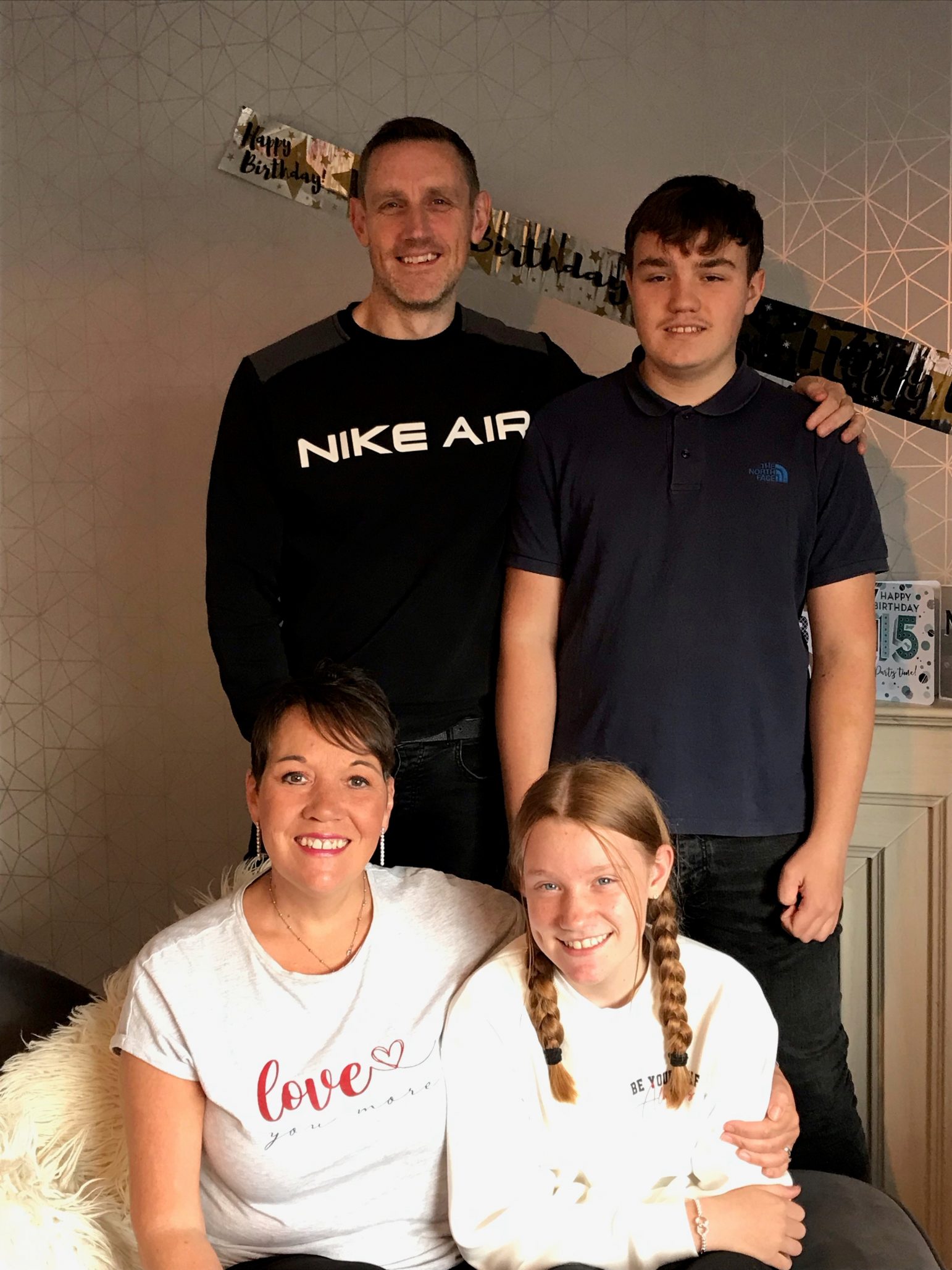 Today, the family make the most of their time together by helping and supporting each other.

The close family have spent quality time together when they can including memorable holidays including a cruise and a trip to Florida. Suzanne and her daughter Lauren, who is now 12-years-old, have also benefitted from the services of a local charity, CLAN Cancer Support, who have helped her to understand what has happened to her mum.

Suzanne also used some of CLAN’s wellbeing services which introduced her to Reflexology. She loved it so much that she trained and qualified in Reflexology and Indian Head Massage. This reflects Suzanne’s admirably positive attitude to all that she has been through since her diagnosis. She credits the bestselling book ‘The Secret’ for changing her perspective.

She said: “I really do think that this happened to me at the right time and that it was for good reason. The diagnosis totally changed my outlook on life. Instead of just battling on with the everyday, I now wake up in the morning and think to myself “here’s another day to enjoy” and I am grateful for that. My tumour will never be gone yet I try to ensure that I make the most of my time, especially in the mornings as I do get fatigue in the afternoons. But it is vital for me to just keep going.

“I have never once thought “why me?” because something like this can happen to anyone. I try not to overthink it all or wonder what life would have been if this hadn’t happened to me. I do have bad days – especially when maybe I am on my own as the kids are at school and I can’t work or drive anymore – but they don’t happen very often as it just doesn’t help me to feel that way.”

Along with her friends and family, Suzanne has been tirelessly supporting The Brain Tumour Charity and held several fundraising events including Easter egg hunts, race nights, bake sales and taking part in the Tough Mudder challenge. Together, they have raised an amazing £30,000 for The Brain Tumour Charity, which they want to be spent on research to help find a cure for brain tumours, as well as more than £10,000 to support other organisations in her local area.

Suzanne said: “I am not sharing my story because I want people to feel sorry for me but I truly believe that more people need to know about and understand brain tumours and the impact which they can have. I didn’t have a clue about brain tumours – before I had one. As soon as I was diagnosed, I told myself that I could do this and I could still be here for my family – and I am.”

You can help us to stop brain tumours for affecting so many families like Suzanne’s.