Each year, our inspiring supporters unite to take part in The Twilight Walk. And this year is no different.

Despite the impact the coronavirus (COVID-19) has had, hundreds of people up and down the country are taking part in The Twilight Walk their way - using their strides to raise money and awareness of brain tumours. Though we’re all walking apart, we know we’ll beat brain tumours together!

Every one of our amazing walkers has their own reasons for walking. Here are just some of their stories.

Paula from Plymouth is taking part in The Twilight Walk to support The Charity, which is helping her son Will, who was diagnosed with a tumour in the cerebellum region of the brain in July 2017. 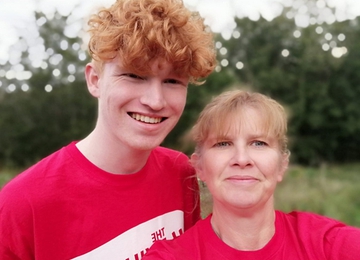 Things were not great when Will was diagnosed and having treatment, so the hospital put me in touch with The Brain Tumour Charity. The people I spoke to were so friendly, sympathetic and supportive. They always tried to help Will and the people, like me, who care for him. That’s why I wanted to do The Twilight Walk.

“Life after the diagnosis of a loved one is a dark and scary place. We were expected to take on so much to mentally process what was happening and physically cope with looking after Will when we have no medical training. We did it though - perhaps we were a little overprotective, but Will is doing well now and he’s working hard to overcome what’s happened. It’s an emotional rollercoaster for everyone but it does get better.”

Meziara from Kent is taking part in The Twilight Walk virtually in memory of her partner Steve, who died earlier this year after being diagnosed with a grade 3 oligodendroglioma in 2018, when his children were just 24, eight, two and six months old. 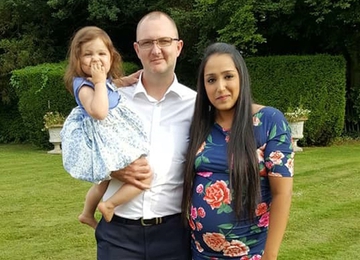 I’m walking in memory of a man who was so incredibly special to so many people. He was my best friend and my soulmate. We lost Steve in such a short space of time to this truly terrible disease.

"The Brain Tumour Charity were massively helpful when Steve was diagnosed as I joined the online support groups when I just couldn’t face speaking to family or friends about what was happening. I also searched through other people’s stories as a way to give myself hope for the future.

“The signs and symptoms of a brain tumour need more awareness - they may not even be obvious at first, which is what happened with Steve. It is also really important to me to let people know that recovery isn’t always straightforward and due to complications two journeys are never the same. I also want to remind people who have brain tumours and also the people who are caring for them that they are not alone, even though it can feel that way sometimes.”

Jennie, 71, from Lichfield in Staffordshire is aiming to walk 50km after being diagnosed with a glioblastoma multiforme (GBM) in 2010. 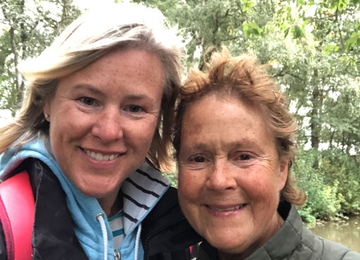 I’m walking because I can do it! I was given a short prognosis when I was first diagnosed in 2010. So, I feel very lucky to be feeling fine and still here!

"I play tennis, I walk and I swim as I’m absolutely convinced that keeping your body fit, eating healthily and thinking positively contributes to strong mental and physical wellbeing. Most importantly, I have lived to see nine of my 12 grandchildren be born since I was diagnosed in 2010. I couldn’t ask for any more, really. I hope through fundraising that we can help to find effective treatment or a cure for more people who are diagnosed too.”

Sue from Coalville in Leicestershire lost her 27-year-old son to a brain tumour earlier this year, nine years after he was first diagnosed with a medulloblastoma. She and 12 dedicated friends and family will be taking part in The Twilight Walk virtually. They’re taking on the challenge on dog walks, treadmills, weekend hikes, around their nearby residential streets and by pushing prams to show support and solidarity following the family’s heartbreaking loss.

Sue said: “Jack never wanted to be forgotten - and he never shall be. He always smiled even through his illness and his positivity deserves to live on. I’m walking as a way to keep me going and in hope that we can make a small difference in Jack’s memory to how this disease tears families apart. There needs to be both more awareness of the signs and symptoms of brain tumours but also into the treatments which Jack had but so that they can have more permanent results.

“As a mum, not only have I had to grieve the loss of my son but also of the hopes and dreams which I had for him. He shall never be the dad or the husband which he was going to be. Our lives were taken up with caring for him and so I comfort ate which is something I have always done since I was a child when under stress.

“The Twilight Walk is a way to do something to support The Charity, which we have been doing for a long time, and also to start looking after ourselves again too.”

It’s not too late to take part in The Twilight Walk virtually this November, at a time or place special to you. We may not be walking side by side, by you can still use your strides to make a difference.