This week is Dying Matters Awareness Week, which aims to open up the conversation around dying, death and bereavement.

Sadly, many of you will know just how it feels to lose someone you love to a brain tumour. Brain tumours are the number one cancer killer amongst children and adults under 40-years-old. The Brain Tumour Charity is doing all we can to find a cure, increase survival rates and develop effective treatments.

Whilst there is no escaping the grief that losing a family or friend to a brain tumour causes, there are ways to make death count and ensure that those final moments build lasting memories no matter the circumstances.

Here, some of our supporters who have experienced loss share what they did to ensure the best possible death for those they love.

Shirley-Anne Smith lost her mum Doreen after she was diagnosed with a butterfly glioma, which had grown to the size of a first, on October 31st 2017.

Doreen had first been diagnosed with cancer in 2010 when Shirley-Anne was pregnant with her son. Sadly, his dad died when their boy was just 18-months-old. So, Doreen had become a second parent by helping with the school runs and making dinners. Doreen and Shirley-Anne’s birthdays were only one day apart so they always celebrated together. Shirley-Anne had to grieve her own loss as well as help her young son come to terms with his Grandma’s death too and he needed some specialist counselling for bereaved children.

Because of Doreen’s frail condition due to other health complications, her treatment options were limited. The family were told shortly after her diagnosis that they maybe had weeks or even only days left together.

So, in those final stages, they never left Doreen alone and they respected her wishes to die in hospital at Edinburgh Royal Infirmary rather than in a hospice or at home. They did all that they could to create some special memories together during that time including encouraging friends to visit, playing her favourite music and bringing treats, including wine and gin, into the ward.

Shirley-Anne said: “When you go through a loss like this and you’re limited to days or weeks left together then you don’t want to miss a thing. It was like the world around us outside of the hospital room ceased to exist.

“My stepdad brought his guitar in and would play and sing to her. My son, who was six-years-old at the time, brought her in a fidget spinner and made her what he called a ‘focus pocus’ out of hama beads. It was something to keep her brain going and she held it in her hand constantly. When she lost the ability to speak, she used it to direct her attention to whatever she wanted.

“My mum’s best friend spent so many hours with her and, together, they made my son and nephew wonderful memory boxes with high fives and hand prints from Grandma and little notes about the things she loved about them.

“One really special time that sticks in my head was when we played her some music via an iPod and she put her hands out to my son and I and said: “let’s dance”. She was able to stand up with support then so we pulled her up and the three of us danced together while she sang as loudly as she could to ‘Ain’t No Mountain High Enough’.” 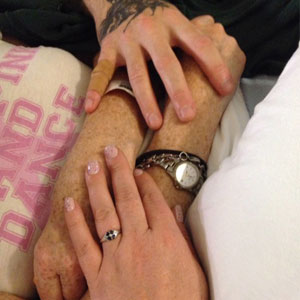 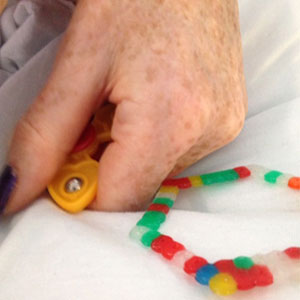 Music was also central to making treasured memories for Heather Ramsey ahead of losing George, her husband and father to their two daughters, to a glioblastoma in July 2011. He passed away just nine weeks after he was diagnosed so time really was precious for the family. He was moved to a Marie Curie Hospice as his condition deteriorated and he became bedridden.

Heather said: “In those final days, although it was the worst time of our lives, we managed to make some wonderful memories, and the staff were amazing. During George’s reflexology sessions, they arranged for us to have Reiki, which was really helpful and relaxing. He couldn’t speak any more so he communicated by humming songs including ‘Love Is All Around’ and ‘We Are Family’. We spent every day together in the hospice, from 10am until Midnight, and I often stayed over too.

“One time, there was a thunder storm so I pushed his bed out into the patio outside his room so that he could feel the rain on his feet. Two days before he died, his pipe band came and played for him and he enjoyed a delicious sip of Guinness. We celebrated our 27th wedding anniversary with a glass of champagne, including a toast with the staff, and reminisced over old photos.

“On Father’s Day, the girls bought a photo frame with a picture of the three of them together in it and a teddy bear which said “I love you Dad” on it – both of those items were buried with him.” 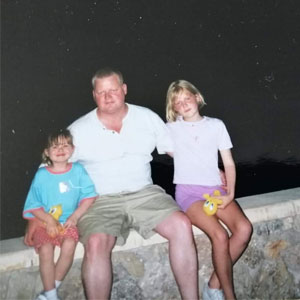 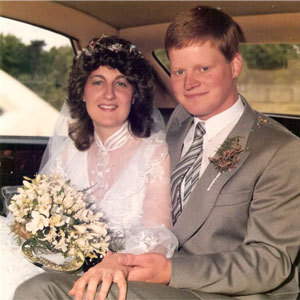 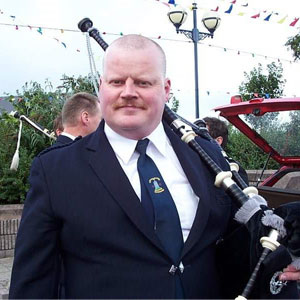 The Brain Tumour Charity is here to help you find the right support when you are preparing for or have recently lost a loved one. We can provide accurate information, practical advice and emotional support for anyone affected by a brain tumour in a variety of ways to suit your needs.