A mum who was diagnosed with a brain tumour during Lockdown last year has had to teach her two-year-old son what to do if his mummy has a seizure.

Rebekah Arkle, 31, from Chessington in Surrey was diagnosed with a low-grade brain tumour in September last year after she experienced what she thought at the time was a panic attack. In fact, it was the first sign of what could later be confirmed as a brain tumour.

It was just before her son Sebastian’s 2nd birthday and he had just woken up from a nap. Rebekah went to get him from his cot when she suddenly felt sick, an image of a woman flashed in her brain and then she couldn’t move, even though she could hear her son calling out for her.

Similar episodes happened over the next few weeks and Rebekah kept a diary of how they made her feel, which was similar to déjà vu, as well as what she had eaten or drunk before it happened. Her husband Tom also took a video which helped to support her diagnosis. She contacted her GP again and she was referred for investigations.

An MRI and EEG in August confirmed that she had a mass on her brain. This was later confirmed to be an Amygdala tumour on her right frontal lobe which was around the size of a golf ball. Following the advice of three neurology specialists, Rebekah is currently on a ‘watch and wait’ treatment programme.

Rebekah said: “The seizures are horrible, I really hate them. There doesn’t seem to be anything that triggers them so I live in fear of one happening. I can hear and see everything but I can’t do anything. I get about five seconds to alert someone and then it happens and lasts around two to three minutes. When I come out of it, my husband Tom has to carry me to the sofa or to bed so I can pass out and sleep for hours. I can’t control my body temperature either so I am freezing cold and so weak.”

Rebekah keeps herself busy as a mum to her young son and she also is a Yoga teacher which she juggles around any seizures she has. She admits that she is scared to take her son out in case she does have a seizure. She has also explained to her young son about what to do if she has a seizure when they are at home. 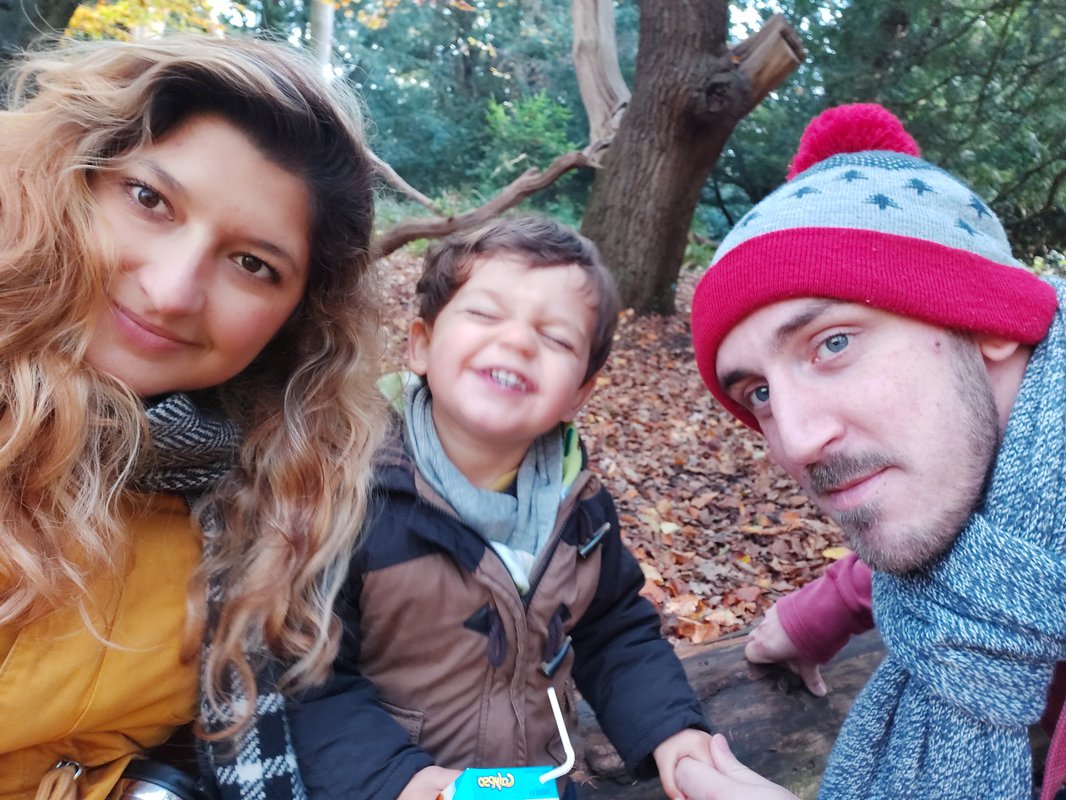 “This was the hardest conversation that I have ever had. Sebastian doesn’t know what a tumour is and we try not to use medical language around him. But, it’s important that we tell him the information that he needs to know."

Rebekah said: "We told him that if I say “Mummy’s having a seizure” that he comes and holds my hand and not to let go, he strokes my face and he talks to me. He knows that I can’t respond until I come out of it. When I do, I usually cry and sink to the floor with him. Sometimes, he asks if he can wipe my tears and he also kisses my head or where it is hurting. One time, he got a piece of toy toast for me and said that it would protect me.

“I cried so much when we first had that conversation with Sebastian. But Tom said that it’s better than having the conversation about why Mummy isn’t here anymore. I hate not being able to take him out by myself as he so often wants to go exploring but, if it’s too loud, or if he doesn’t hear me when I call him, then I feel like I can’t protect him should I have a seizure.”

Rebekah’s route to diagnosis was traumatic in itself. The delays for treatment due to the COVID-19 pandemic meant that she waited two months for an MRI scan – although she called every week to see if there had been any cancellations but she wasn’t able to get an earlier appointment.

Due to an administrative error, the hospital actually called Tom by mistake after the scan and he was told that they needed to talk to his wife about the results but that they couldn’t tell him anymore, despite his obvious fear and upset as to what news may come. Rebekah was then told that they had found a mass on her brain over the phone due to Covid restricting face-to-face appointments.

Rebekah said: “I didn’t understand what was being said to me – I sat down on the floor and I started to cry. I asked the doctor to repeat everything to my mum, as my parents were with me at the time, and I cried her lap. My dad took Sebastian for a walk and Tom was calling us all to find out what had happened before he got home and he was in a state of shock.”

She had a follow-up appointment and a contrast MRI the following week. However she wasn’t fully informed about what the diagnosis meant or offered any support during that first phone call and she understandably thought that the tumour was a death sentence as she didn’t know anyone who had been affected by the condition before.

Rebekah said: “I know how incredibly hard doctors have been working throughout the pandemic and that they have more severe cases to deal with than mine but unfortunately I didn’t get any advice, information or support.

“So, we started planning for Christmas in October alongside sorting out Wills and the power of attorney. I was looking at recyclable coffins and creating a playlist for the funeral whilst looking after my son. I danced with my best friends and we drank champagne. I cried in my husband’s arms and I looked at my son like it was the last time that I was going ever to see him.”

A month after her diagnosis, Rebekah and Tom met with the neurologist who explained that the mass was a type of brain tumour. She was shown the scans and explained about the location of the tumour and how they would look at the best options for treatment.

A month later, she met with a neurosurgeon who said that ‘watch and wait’ was the best treatment option for her type of brain tumour, which was confirmed as a Dysembryoplastic neuroepithelial tumour (DNET). The tumour is wrapped around a major blood vessel which makes it difficult to remove and it is also unlikely to grow. Her condition will be monitored with six-monthly scans to show if it grows and to see if she may require surgery in the future. She also takes daily medication to reduce the likelihood of a seizure happening – the type and dosage of this medication is likely to increase in the near future to manage her frequent seizures.

However, through a family member, Rebekah also had an appointment with Hospital of the University of Pennsylvania and she was told that it should be taken out immediately. She has a further appointment with the Oxford University Hospital NHS Foundation Trust in July to further discuss her treatment plan.

Rebekah finds her lack of treatment options confusing as she either can watch and wait for the tumour to grow or change and risk the seizures until then or have the surgery which comes with its own risks including personality changes, or loss or sight and mobility.

As she waits for more information on her options, Rebekah is teaching Yoga for a homeless charity and she is also exploring options to sit on a board to influence companies on how to bring about meaningful change in the world.

Rebekah said: “Eight months ago, I thought I was having panic attacks. Now, I have a brain tumour and I am teaching my son how to care for me. You never know how quickly your life can change and it has meant that my priorities have completely shifted.

“The impact of the tumour is debilitating. Prior to my diagnosis, I chose to work part-time so that I could have “Sebby and Mummy” days with my son. Now, I feel like I have let him down because we have to stay local and someone has to come with us. My driving licence has been taken away so I can’t just pop in the car to do a food shop, visit family or collect my son from nursery. I am not comfortable going on a bus with him until my seizures are more under control either.”

In need of support, Rebekah googled organisations for people affected by a diagnosis similar to hers and found The Brain Tumour Charity. She said it would have been helpful for the Charity’s support services, including its information pack, website and real-life stories, to have been flagged by the team looking after her at the point of diagnosis. She has since been an active member of The Charity’s Online Support Groups for information and advice from those also affected by a brain tumour in some way.

Rebekah said: “The Brain Tumour Charity have just been amazing and the organisation’s resources have helped me so much. The Facebook group is full of such wonderful, inspiring, helpful individuals in the same situation as me. I can ask any question and I get supportive comments and suggestions back. There’s so much useful information on the website too including questions to ask medical practitioners. I also am part of subgroups contributing to brain tumour research which makes me feel like I have control and input into what is happening around me.

“I didn’t always feel like I could talk to my family members about my diagnosis. It’s bad – if not worse – for them too. If I was gone, I would be leaving everyone behind who would have to adjust and carry on. With that in mind, I felt like I couldn’t tell people every thought which was going on in my mind. I felt isolated with no emotional support from the medical team looking after me.”

Despite it all, Rebekah is keen to stay optimistic about her future and to focus on spending quality time with her young family. Although the day-to-day routine of her life as a mum is different to what she had planned, she is abundantly appreciative of what she does have.

She said: “Yet since my diagnosis I am so thankful for all that I have in my life. I wake up every morning and think of three things which I am grateful for and I end every day by thinking about what made me smile. I love and appreciate every moment of my life now. If I ever feel anxious or stressed about something then I think to myself “I have a tumour – can this be really that bad?” and all my concern melts away.

“I just don’t want to die. I want to see my little boy grow up. I want to spend forever with my incredible husband. I want to make a difference by supporting The Brain Tumour Charity.”

It's good to talk.

Our team is here to help you find the right support if you or a loved one have been affected by a brain tumour diagnosis.