“He is still my Ian” – Christine’s story

A wife has shared the ups and downs of life with her dearly loved husband after he was diagnosed with a brain tumour last year.

Ian Judge was at home with his wife Christine and three of their five children – 28-year-old Kat, Callum, 22, 26-year-old Dom and his fiancée Charlie – when he had a seizure. Ian hadn’t had any known symptoms of a brain tumour prior to this incident last November. He had been having migraines for a few weeks but this had been put down to stress as Ian was helping his unwell parents to move house.

Dom is an Emergency Medical Technician for the East Midlands Ambulance Service. The family credit his quick actions with saving Ian’s life that night.

Christine said: “We were enjoying a Chinese takeaway and everything was great. But then we noticed Ian was saying some odd things and he also said that his hearing and head felt funny. He had a puzzled look on his face and it felt as though he wasn’t looking at anyone or anything.

“I looked at Dom, he looked concerned, so I went to get Ian a glass of water. Dom asked for his kit bag as he thought his dad was having a stroke. The next minute all chaos broke out. Ian began having a sudden and violent seizure so the boys lowered him to the floor. Dom told me to stay in the kitchen and all I could hear was him shouting commands to Callum to ring 999 and Kat to get his bag out of the car and so he could start working on his dad. Ian began agonal breathing so Dom started to manage his airway, then he stopped breathing, and he did not have a pulse. Dom and Charlie began CPR in an attempt to resuscitate him

“They managed to get him breathing again and the paramedics quickly arrived and took over. Ian became very agitated and combative, so much so the ambulance crew called for an emergency doctor, but eventually he calmed down and got on the stretcher as he asked me what was going on and why his chest hurt.”

Ian was rushed to Walsgrave hospital where a CT scan found a mass on the left hand side of his brain. He spent the following week in hospital followed by a series of appointments and consultations leading up to the surgery. Ian had an awake craniotomy which successfully removed 95% of the tumour just a week before Christmas on 17 December. Fortunately, he was able to return home on 23rd December.

“Christmas Day was brilliant – Ian was so part of it and we felt blessed to have him there with the family, including our two other children – 26-year-old Suz and Ben, 28. I am rubbish with meal timings, so in the month before his surgery, Ian did a spreadsheet for me and the kids to follow!”

In the New Year, Ian was diagnosed with a Glioblastoma Multiform Grade 4 brain tumour in his left temporal lobe. The surgery was followed by six weeks of chemotherapy and radiotherapy which finished on 18th March – just days before lockdown was imposed. Without treatment, Ian was given just three to six months to live. He now has regular scans to monitor his condition, which is currently considered stable.

Christine said: “Ian’s seizure and following diagnosis was such a shock – it if wasn’t for Dom and the kids then I’m not sure that my husband would still be with us now. After the treatment, the doctors told us to go and make some memories. This was difficult as the pandemic took hold and our ‘new normal’ turned out to be quite different to the one which we had envisaged.

Christine works for Sainsbury’s in Walsgrave. Alongside reducing her hours so she was able to care for Ian, the wellbeing team advised her to write down her reaction to all that had been happening. This would help her to channel her emotions and process the changes she and her family had been experiencing.

Here, she shares her thoughts with us on those changes and the importance of remaining positive and even jovial in the middle of some of the toughest times:

Driving: Ian had a second minor seizure the day before his surgery in December. So he had to surrender his licence and he can reapply only for it after two years of being seizure free. Learn more about driving and brain tumours.

Work: Ian semi-retired from his role as Operations Manager in August 2019 but was hoping to do some part-time work after that. Unfortunately, as the vision in his right eye is poor, he’s now unable to work at all. The medical team have told us that this may improve, but also that it may not. So, we will just have to wait and find out. Learn more about employment and brain tumours.

Speaking: The left temporal lobe of the brain is the area which controls speech. He had elected to have an awake craniotomy so that they could preserve as much of his speech as possible. Yet, on the day after surgery, there were only three words Ian could say. One of them was “bad” and the other two I can’t put here!

Spelling and pronouncing words: Ian’s spelling is quite poor since the surgery. As I write this, he’s just asked me how to spell the word ‘sliced’. It can be quite amusing though when Ian pronounces a word which he’s not familiar with! One of his favourites is Folic Acid – he joins the words together and just pronounces it as one word.

My family and I are learning to understand what Ian means. Words can be similar to what he means or he describes. For example, he may say “I’ll go and put the dishwasher on” but he means the washing machine! It’s a guessing game. Learn more about communication problems relating to brain tumours.

Reading: As Ian’s vision is weak, he struggles to read anything of detail or with lots of words. If he receives a text that he doesn’t feel he can read then I read it for him! When he does read, it’s very child-like.

Have a joke: Admittedly, this may not be for everyone. You may wonder why I have added this. Ian’s personality after his surgery was very different and this took a lot of getting used to. In many ways, it still does. He used to laugh and joke with the kids and his friends but this has stopped. The kids, especially the boys, found this very difficult to handle. However, more recently, we have noticed that Ian is starting to show more of his old traits, which is obviously fantastic.

Preventing him banging his head: I am so paranoid about Ian banging his head as I know it would hurt him. Every time we cook, I try and keep him away from the cooker hood and every time we’re in the garden he’s banned from going in the shed!

His intensities and emotions: Ian has always been very passionate about everything he does. Since his surgery, his intensities have become stronger and he is much more emotional than he was before. Little things, like cooking dinner, can lead to ‘heated conversations’. He will worry about this so much more easily too, like making it to an appointment on time. But, he is learning to manage this much more now, thankfully.

Me time: Everyone always says to me that I need to make time for myself as well as being there for Ian. That was virtually impossible in the early days as I couldn’t leave Ian on his own and he also couldn’t understand why I may need time to myself. But, with the help of family and friends, I did get an hour or two to myself, particularly when lockdown eased over the summer.

Remembering the positives: Not everything has been bad this year. Our daughter got married on 22 February and so we all had a very special day before we were locked down.

When the Cancer Research Race for Life was cancelled due to Covid, we decided to do our own instead around Bosworth Battlefield. We raised an amazing £1,700 for Cancer Research UK.

Ian and I used to love cruise holidays and have been all over the world on a total of 25 trips. On our 10th wedding anniversary, we renewed our wedding vows on the P&O ship Azura. We also saw one New Year in on our ship balcony with friends watching the fireworks in Madeira Bay which is something I will never forget. This year, we spent a few days together at Rutland Water, which was fantastic. 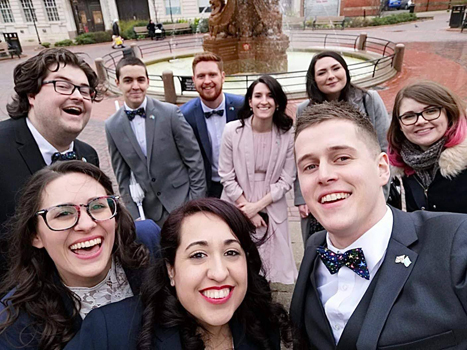 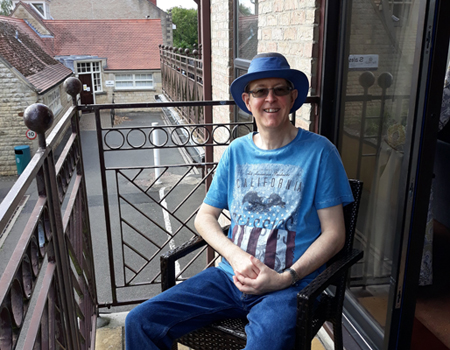 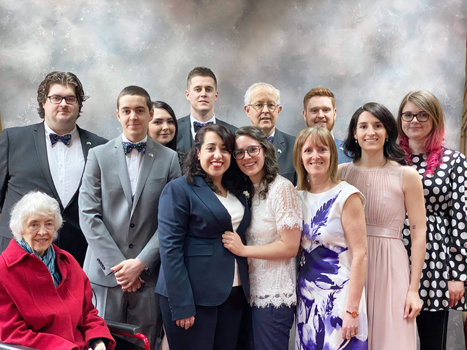 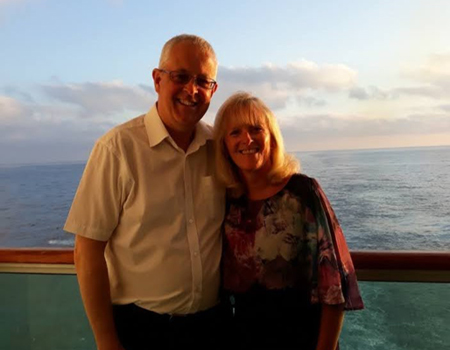 Through The Brain Tumour Charity, we have met an absolutely amazing couple called Oliver and Sharon Highway. Oliver is eight years into his treatment for the same tumour as Ian and has had chemotherapy every month since his diagnosis. He is an absolute inspiration and we are so blessed to have them as our close friends. Sharon has been there for too – I know that there are things that I can only ask Sharon about brain tumours and Ian’s recovery – sometimes I will notice things in Ian and talk to her about it and she will say ‘Oh, Oliver did that!!’ It is so reassuring. I also love listening to Ian and Oliver chatting – their positivity is fantastic.

The main positive, of course, is that Ian is still with us. All that he has been through is absolutely mind-blowing. We have nothing but gratitude for the medical team who have looked after him and been so helpful and patient with all the questions we always ask.

Despite everything, we’re getting on with life. Ian continues to improve every day as his brain makes new pathways. His chemotherapy is for life but we’re hopeful that we can reduce the regularity of treatment over time. We’re so grateful that it was able to continue throughout the pandemic.

Ian and I are very family focussed. We have five kids between us ranging from 28 down to 22 years old. Every one of them, and their partners, are absolutely amazing. We are so proud of each and every one of them.

We’re looking forward to Christmas this year. It is going to be very different to previous years but we’re just so happy that Ian is here.