Home » News » “We thought Dad had brain fog after his Covid vaccination.”

Here, Laura tells us in her own words how those final weeks with her beloved father were for herself and the rest of the family including her 12-year-old nephew who lost his ‘Grampy’.

Before we knew it, we were already at the point where Dad was too weak to get to the Great Western Hospital. So we had a Zoom meeting with the oncologist at Churchill Hospital in Oxford instead. She asked to see and talk to my dad and he said “hello” in a bright and cheerful manner. Then, she asked him if he knew what was wrong and he just stared at us all blankly as he couldn’t get his words out.

We then asked to speak to her in another room and that’s when she told us that Dad had a primary brain tumour – a Stage 4 Glioblastoma – and there were no treatment options for him. She asked if we wanted to know his prognosis was – we replied no – I didn’t want to know – but, for some reason, the oncologist told us anyway. Weeks. My dad had just weeks to live. My mum, brother, sister-in-law and myself just collapsed back on the bed hugging and sobbing. The oncologist was concerned that there was no care package in place so the call was ended to set that up before the weekend.

How had we got here so fast? It was only a few weeks ago that we all thought Dad had ‘brain fog’ after his second Covid vaccination. He called 111 to check and Mum searched online for side-effects of the jab. Then there was a heat wave and he was really tired. Walking to the bus stop or doing the gardening wore him out. He was also diabetic and had kidney failure so we thought it could be his low iron levels contributing to his tiredness too.

Then suddenly, he couldn’t remember how to give himself the insulin which he had been doing for the last 30 years. Then he couldn’t put the passcode into the iPad. Then he forgot how to use the TV remote control.

He was booked in for a blood test in three weeks’ time which showed that Dad had mild low B12 levels – but a course of B12 injections didn’t solve it.

By now, Mum was getting really upset as she watched Dad not understand how to put his jumper on or to tell the time. He couldn’t remember who the Prime Minister was during a GP appointment so they referred Dad for a scan in a fortnights’ time.

But things got worse still and we never heard back about a scan appointment. We returned to the GP and, by now, Dad couldn’t even touch his own nose and he was becoming incontinent too. We were sent to A&E at the Great Western Hospital in Swindon. A scan found that Dad had three brain tumours. Three.

Dad was admitted to a ward to spend the night with no visitors allowed due to the Covid restrictions in place. Reluctantly, a nurse let Mum stay with him for five minutes before she had to leave him confused and alone. He asked Mum to take him downstairs for a cup of tea, thinking that they were at home. Dad was really out of it by now – he had no idea where he was. 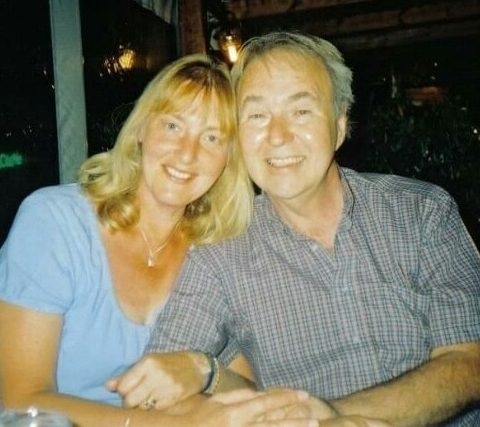 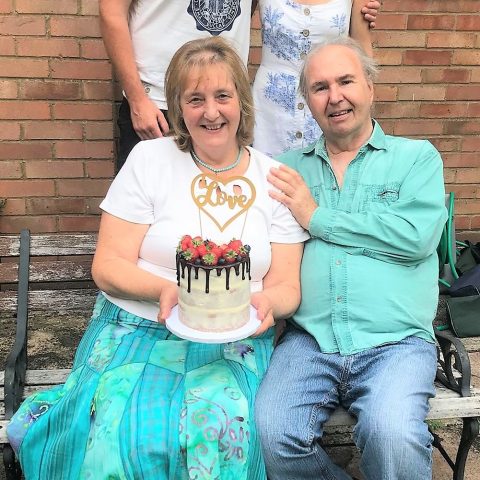 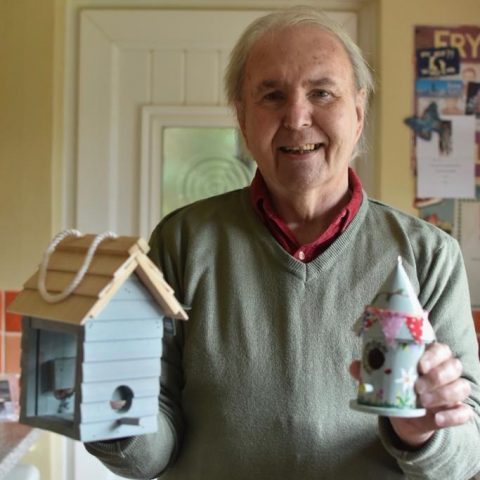 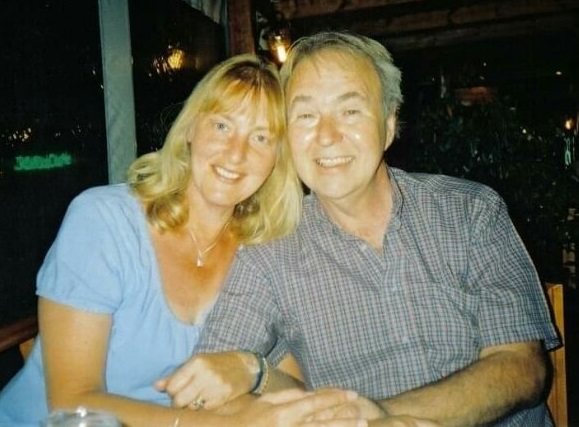 Laura’s parents had a strong relationship over the years together. 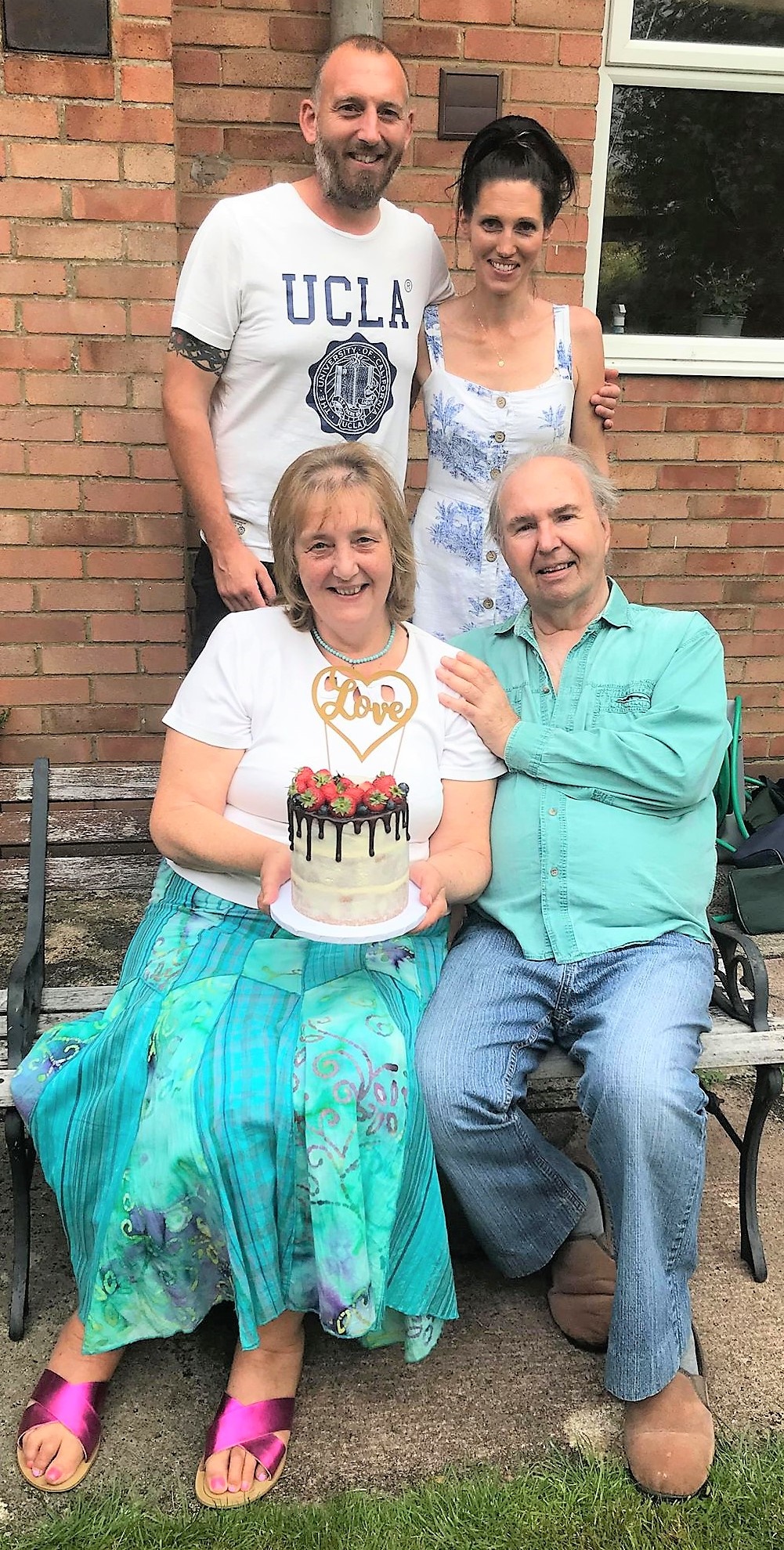 The family remain stunned how just weeks later from this day their adored dad passed away. 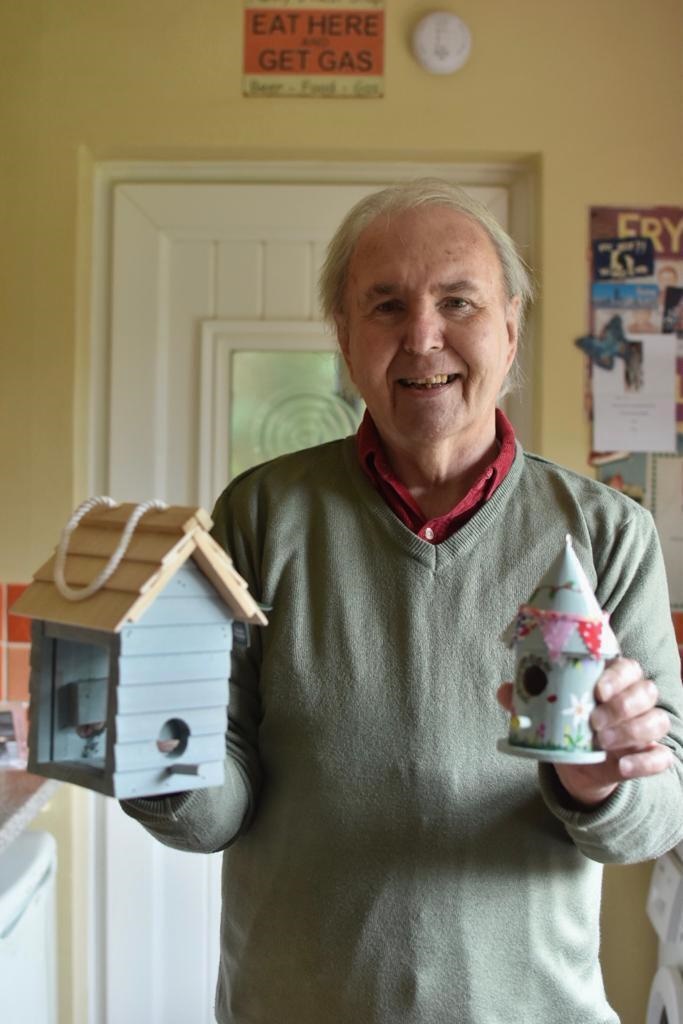 Laura’s Dad on Father’s Day, just ahead of his diagnosis.

Mum was allowed to visit the next day as he was moved to another ward. My brother and I also visited that night. Mum helped him use the toilet and give him his insulin and medication – we have no idea how he managed that when we weren’t there. A nurse asked Mum to answer some questions on a form because “your husband cannot answer them.” It was like they had no idea why Dad was there or what was wrong with him – of course he couldn’t fill out the paperwork himself.

So many things were making him cry. He couldn’t understand how to swing his legs around to lay on the bed. Instead, he was at a funny angle hanging off the bed as the hospital couldn’t find any more pillows to prop him up and stop him from falling off. He moved to another ward which was better but the nurse still thought Dad could give himself the insulin – it’s lucky that I was there then to clarify that he obviously couldn’t do that.

We were just waiting for information on a possible biopsy or what treatment options my dad had – but we kept being told that we had to wait to hear from another team at another hospital. Dad was scanned to see if there was a primary tumour in his body. We were told that it was highly unlikely that the three tumours in his brain were the primary source. Nothing was found and they even tested a tiny mole on his shoulder.

A week later, Dad was sent home and Mum was equipped with only a commode and a bag full of medicine – but no care package. Mum had to work out what to do with all of the drugs and testing Dad’s blood sugars as well as what he could eat as his levels were out of control. My sister called Occupational Health for some help for mum and to request a hospital bed. I called the GP and said we needed support too.

The GP visited a few days later and they apologised to Dad for not catching it sooner. He didn’t understand what they meant. The GP also asked Dad if he had thought about being resuscitated. Mum, in utter shock, and Dad both said we were not at that stage yet. We hadn’t heard anything about treatment – or even if the tumour was cancerous at that point. We could only hope that he didn’t register the enormity of the whole horrid situation. Dad said that he wasn’t in pain.

We finally got a letter from the team in Oxford for a video call appointment in a weeks’ time – we only knew it was with an oncologist when we searched the name online. That appointment felt like a long time away as Dad was getting weaker and weaker. He was incontinent, very tearful and thoroughly fed up with all the drugs he was having to take. He still knew who we all were though, thankfully. He was always so kind and so grateful to us.

Until a couple of weeks ago, Dad had been completely fine.

Then another GP came to see us. In front of my dad she asked Mum: “Have you signed the resuscitation forms yet?” My mum was shocked and this was awful for my dad to hear too. They quickly left the room for somewhere more private. Mum said that we still hadn’t heard what treatment options there were and the GP said: “Well, everyone’s heart has to stop one day.” She said that Dad would have no quality of life if he was resuscitated – he would be in a vegetative state. Mum was numb with shock and disbelief that this was all happening within a few short days – and acutely aware that Dad could be listening next door.

One day, Dad fell up the stairs. We called an ambulance as my brother and sister-in-law couldn’t lift him back up. The next day, Dad fell out of bed and my brother had to help again. My young nephew was wiping away Dad’s tears and telling ‘Grampy’ not to cry.

It was also in that video call that the consultant said that the brain tumour was likely to have started growing around six months ago. Dad had annual extensive eye tests due to high eye pressure and suspected Glaucoma which was never diagnosed. Could those checks have picked up Dad’s scan sooner if they had been carried out every six months instead? We will never know or whether it would have made any difference, either.

My sister-in-law phoned the local hospice and, luckily, he could move there the next day. Mum went with him as they put him on a stretcher and took him out to an ambulance. Mum knew he wouldn’t be coming home again. It just broke her heart. We knew that Dad was not our Dad anymore because he would not have just given in to this. But he just went along with everything that was being done to him and for him. The OCD diagnosis which he had contended with for all of his adult life meant that he always had to do things in his time and in his own way. But now, he just let anything happen with no arguments or fuss.

The hospice was beautiful with stunning gardens and the best care that anyone could ever ask for.

I wish they hadn’t talked about “end of life” in front of Dad though – I didn’t want him to be sad about it. I wanted to protect him so much from the awful truth and just let him sleep.

Dad had a lovely room the sun shone into it every day. We told Dad that it was a private hospital and that he could eat and drink anything he wanted! There were some days when we thought that he may come back home. But then his eyes went vacant and, by the fifth day there, his breathing had changed. We were told it could be hours or days that we had left. We held his hands and he still squeezed them back. He still smiled in his semi-conscious state as we reminisced with each other about mine and my brother’s childhoods, Dad’s funny personality and his cheeky ways. He would return things like faulty Christmas lights to the shop with an old receipt and always get a refund. We laughed at Mum and her clumsy ways which would always make Dad roar with laughter. The nurses said he could still hear us. My brother, my mum and I stayed with Dad the whole time through that awful night.

One sunny morning, Dad slipped away at 9am. The patio doors in his room were open and the sun was streaming in. My mum was hugging him and telling him how much she loves him. I hope that was the nicest way for anyone to go.

My dad looked after himself so well all of his life. He was so careful. He worried so much. We thought we were ready for anything but this took us completely by surprise. I wish there was something in this day and age which could detect this type of cancer. It just seems unbelievable that someone can be here one day and gone the next due to three brain tumours and hardly any symptoms.

You hear about famous people having brain tumours – I knew of a few before Dad’s diagnosis. But I didn’t know about the different types or the one that my dad had – or how aggressive they can be whilst showing no symptoms. I found The Brain Tumour Charity when searching for information online about Dad’s tumour – I learnt so much and I am still shocked about how little funding goes towards research for this absolutely devastating cancer type which tore my family apart.

The Platinum Champions Awards are in honour of Her Majesty The Queen and launched by the Royal Voluntary Service in 2022!

Why getting involved in clinical research is important to me!

Open letter from NHS, charity and community leaders to people with a weakened immune system