Home » News » ‘Losing Dad helped me to be the best person that I can be.’

Lauren Macartney and her dad Michael had the rare bond of sharing a birthday on 22 August. It was just ahead of both of their milestone birthdays in 2013 that the family started to notice uncharacteristic changes in Michael’s behaviour. They had just returned from a family holiday in Ibiza and Michael struggled to remember where they had been. He also became easily confused, short tempered and increasingly forgetful.

The family originally thought Michael could have early onset Alzheimer’s disease. They also noticed that he had started carrying around a lot of Paracetamol and he took a book about how the brain works out of the library. The family think that Michael was concerned about his health before he was diagnosed.

Michael and his wife of 30 years, Gail, went to the GP as she became increasingly worried about his confusion. When Michael incorrectly answered where they had been on holiday, he was referred to Monklands Hospital in Airdrie for a CT scan. The scan had revealed that Michael had two masses on his brain which would later be diagnosed as Stage Four Glioblastoma brain tumours. It was just a week until Michael and Lauren’s milestone birthdays.

The joint birthday was now tainted by the diagnosis and it would remain that way. The family, including Lauren’s two older brothers Mark, 31 and Jamie, 27, now visit Strathcarron Hospice every 22 August, as well as on Father’s Day, and lay flowers on a bench by the pond, which Michael’s room had overlooked.

Michael needed immediate surgery at the Southern General Hospital in Glasgow as well as rounds of chemotherapy and radiotherapy afterwards.

Prior to his diagnosis, Michael was a fit and active man. But, the diagnosis meant that his gym membership was cancelled, his driver’s licence was made void and his job as a HGV driver was also suspended. He used to go on long walks prior to his diagnosis but, in his increasingly confused state, he would either get lost and not be able to find his way home or not have the energy to continue and would have to call his wife to collect him.

Lauren said: “I think that the treatment prolonged my brave dad’s life and that we made the same decision to have it which many other families would do in such terrible circumstances – to fight it in the hope of making him better.

“But, with hindsight, I think the treatment really impacted on his personality which was probably the most difficult thing for us all. For many, treatment will help quality of life but that wasn’t the case with my dad. The changes in his life really impacted him emotionally – he had to try and adapt his life in a way which he just didn’t know how to do – with the additional worry and confusion of the tumour in the first place.”

Just weeks after her dad’s diagnosis, Lauren began her first year at Stirling University studying Sociology and Social Policy. Since graduating, she has also completed a postgraduate degree in primary teaching and began working in a school in 2017. In the final weeks before her dad died, Lauren also spent a lot of time searching online for information about the prognosis of people with a Glioblastoma to try and find answers to what would happen to her dad. Michael passed away on 28 October 2014 with his family by his side at Strathcarron Hospice.

Lauren said: “Those 14 months from Dad’s diagnosis until the end of his life was the hardest experience of our lives. It was truly devastating to watch such a healthy and happy dad become so unrecognisable in every way imaginable. Unless you have been through it yourself, no one will truly understand or know the extent of what we went through.

“But I don’t think anything quite prepared me for the moment he died. My dad dying was something I had thought about and dreaded daily but, when it happened, it still floored me. Even six years on from losing him, I really struggle to even think about what happened and why. But I try my best to reflect back on his life and our experiences to understand that where there is great hurt, there was great love.”

Michael adored his family and being a dad to his children. 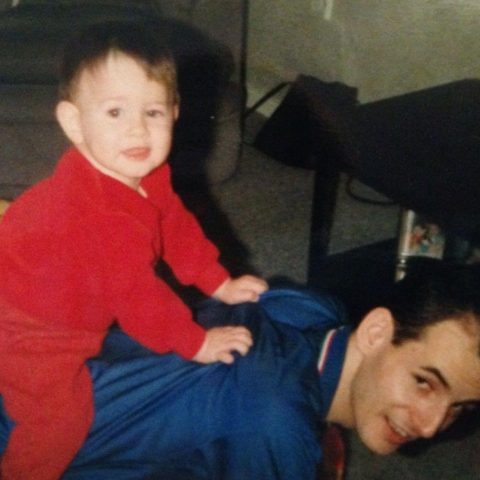 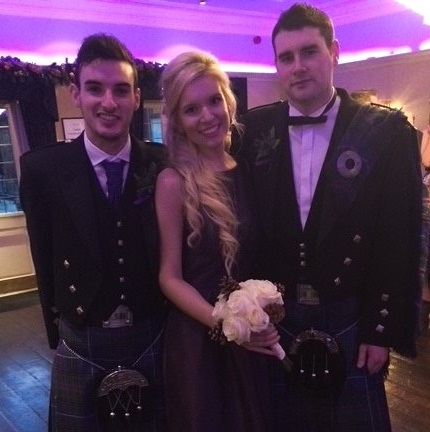 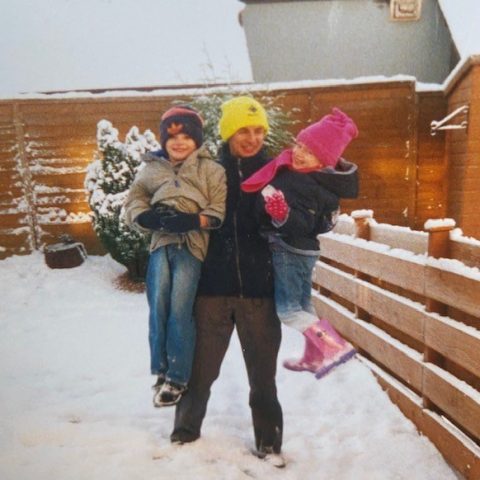 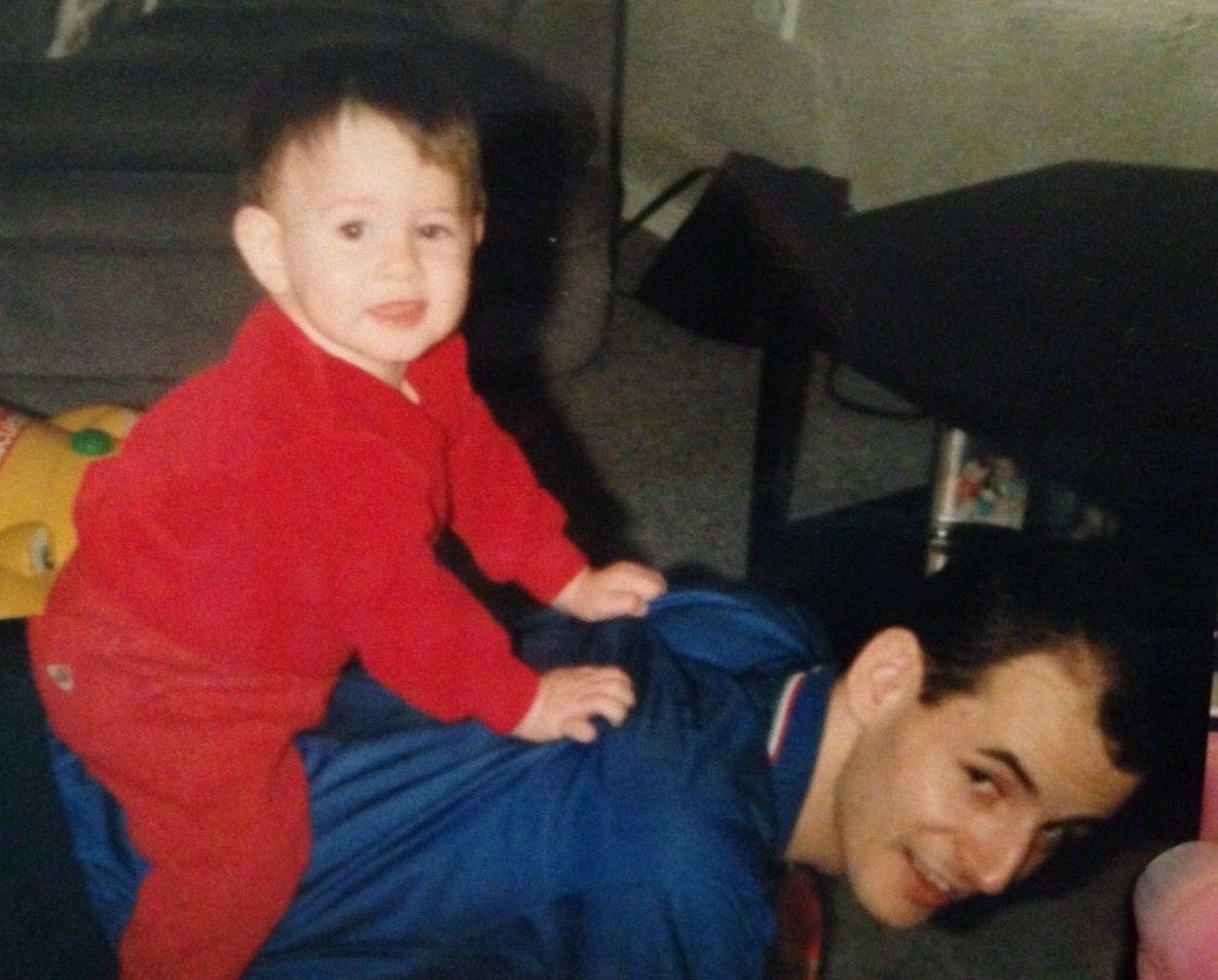 Lauren with her brothers Mark and Jamie. 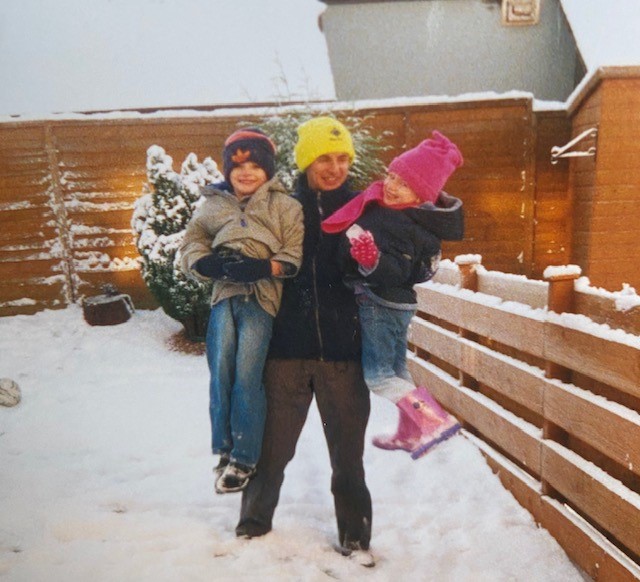 Lauren has lots of treasured memories from her childhood with her dad.

Even in the midst of her own grief, Lauren has a refreshingly positive view of the life lessons which she can glean from her family’s experiences as well as her dad’s influence. She has also been shaped by how her mum had cancer in her womb which was successfully treated just six months before her dad was diagnosed and her parent’s loving relationship.

Lauren said: “I have so many wonderful memories of my dad. I have never felt so confident that, although he may not be here anymore, I know that I was loved by him every single day. Sometimes, when I am walking, I picture him waving in the distance and smiling at me in the way that he always would. I know everyone finds their parents special but he really was a remarkable man.

“My dad’s life was 51 years long and his cancer journey lasted for 14 months. My dad’s wonderful life is not defined by his diagnosis or the months when he was ill. To me, it is defined by the impact he left behind on the ones he loved most.

“I have also learned that someone dying is not like it is in the films. It is not all sentimental chats and bucket lists. It is everyday hospital appointments, trying to pay bills, and coping with fear and stress. My understanding of grief and loss has changed. It is something which I know I will never get over but that it does ease in time. I used to feel physical pain in my chest when I would talk about my dad but this has reduced over the years. That’s not because I care for him any less but because time has helped me to process losing him.

“I think losing my dad so young at the age of 19 was a major life lesson for me. It is one which I am grateful to have had. I think I am now a good listener, a better friend, and I don’t feel scared or uncomfortable when I hear about someone going through a difficult time – I see this as an opportunity to try and help by sitting and talking things through.

“Brain tumours are so difficult to understand and so complex so I think it is important to remember that no two are the same. Although the journey may feel lonely and that you’re the only people who know what it is like to live through this, there are others and they can help you to keep strong. There is always someone to lean on and to talk to. Everyone’s feelings are valid – as I realised in time, everything I felt was normal and completely understandable.”

It is since her dad passed away that Lauren has supported The Brain Tumour Charity. She has also continued to support Strathcarron Hospice and Cancer Research UK by taking part in their Race for Life events.

She added: “My dad didn’t survive this, but others could. A small donation may feel like a drop in the ocean to finding a cure to this deadly cancer but I think every donation is worthwhile and vital to beating this – both for my dad and the many others like him diagnosed each year.”

You can help to defeat brain tumours by getting involved with the Charity’s tireless work to stop brain tumours from tearing families apart.