Home » News » Mum diagnosed with recurrence of teenage brain tumour whilst she was pregnant.

Arlene Lawrence, 30 from Fraserburgh was first diagnosed with a brain tumour in 2011 when she was 19-years-old. She started having severe symptoms almost as soon as she stepped off the plane when she returned home from a trip to Las Vegas with her boyfriend at the time, Iain, who she then married in May 2015.

She had excruciating headaches, pins and needles down her left hand side and sickness which would leave her floored. She visited the GP many times but the brain tumour still went undiagnosed – on one occasion, Arlene was sent away with a nasal spray to treat suspected problems with her sinuses.

In addition, Arlene had been having what are now understood to be symptoms of her brain tumour when she was 13-years-old when her vision suddenly went blurry. Despite many trips to the optician and at Aberdeen Royal Infirmary, it was never picked up. So, she spent six years living with the symptoms with no explanation of what was causing it.

Having received help and advice from The Brain Tumour Charity, she is taking on its flagship fundraising challenge for the second time, The Twilight Walk, to support the organisation help find a cure for the disease, which is the number one cancer killer amongst children and adults under 40-years-old.

Ahead of her diagnosis, Arlene was in her second year at college studying sport coaching but, as she became more unwell, she had no choice but to drop out of her education.

Then on one visit to the GP, Arlene got up to leave and fell to the floor as she had her first seizure. She was booked in for an appointment at Aberdeen Royal Infirmary the following day where she had an MRI scan. This scan found that Arlene had a large 8cm tumour on her right frontal lobe. In fact, it was so large that it was pushing her brain to the other side of her head.

Arlene said: “At the hospital, the doctor took me and my mum into a private room to give us the results of the scan. I almost fell to the floor in shock when they told us about the tumour. The doctor told us that it was very serious, that we should prepare for the worst and that, if the tumour had been left undiagnosed for a few more weeks, then I would be dead. I was blown away.

“I always felt like I was being ignored over all of those years when I went back and forth to the doctor because I was fit and young. My type of brain tumour is more common in older people but that doesn’t mean that it doesn’t affect younger people, like me, too.”

Arlene had surgery a week later to successfully remove 99% of the tumour which was then confirmed to be a Grade 2 meningioma so she didn’t need any further treatment. In fact, just three weeks after her surgery, Arlene was back in the saddle horse riding. She felt much better but she has had ongoing problems with blurred vision ever since.

She had one follow-up scan which showed that her condition was stable and then she wasn’t contacted for any more. The reason for this is unknown but there was a change of neurology staff in the department where she had been looked after which could have meant Arlene’s details were not passed on to a new neurosurgeon.

In the years which followed, Arlene got a job as a support worker, married Iain and fell pregnant with their first child, Aspen, who was born in November 2017. It was during her pregnancy that Arlene was discussing her medical history with a midwife when they realised that she hadn’t had a scan for six years, so it was very overdue. The scan was arranged for April 2018 after Arlene had given birth and, as it was treated as non-urgent, she returned to the hospital in July for the results.

Arlene, Iain and then eight-month-old Aspen went back to Aberdeen Royal Infirmary to get the results and find out the shocking news that the tumour had grown back.

Arlene said: “Life went back to normal after the tumour was first removed. I went years without seeing or hearing from anyone and, because of that, I don’t know when my tumour came back or even if it could have been a result of being pregnant. That has been really frustrating for me.

“When I was pregnant, I did realise that it had been many years since I saw anyone about my tumour but I rarely thought about it other than on that occasion.

“At the appointment, I sat down and my consultant opened up the computer screen, showed me the images of my brain and started talking about the small blob which was on the screen. It took me a few minutes to take it in that the blob was actually a tumour.

“I couldn’t believe it. I had naively not prepared myself for results like that at all. At that moment, my whole world turned upside down. I went from being a new mum and sitting up on Cloud 9 to the thought that I may not see my baby grow up.” 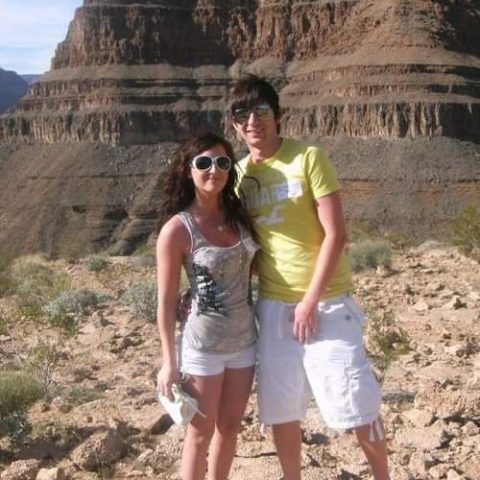 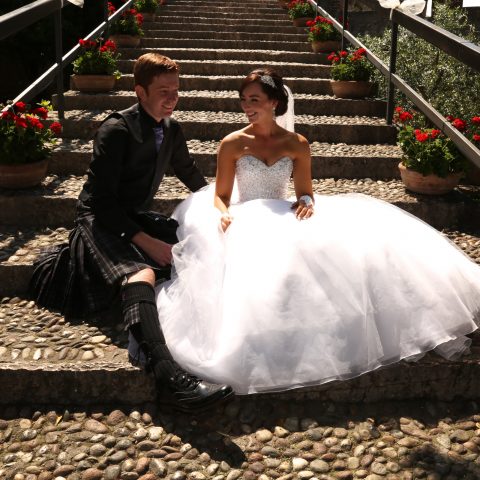 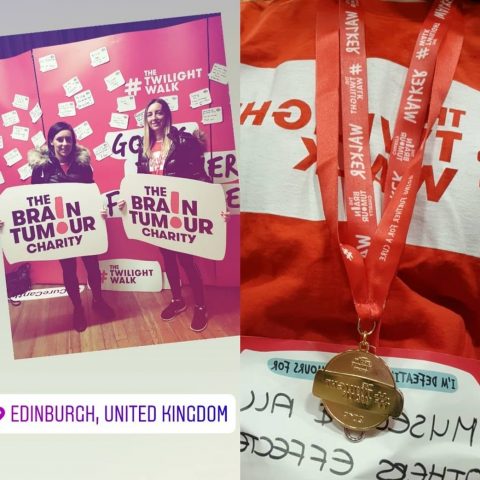 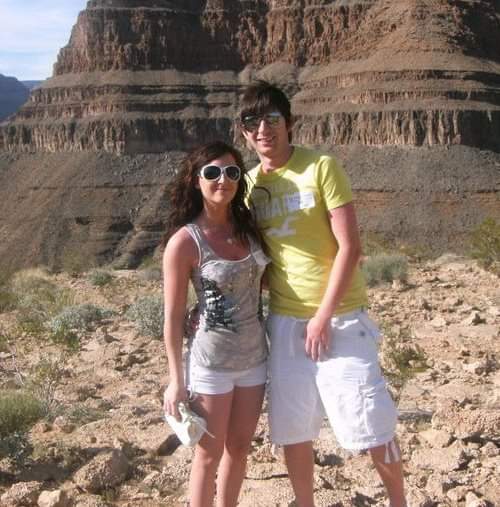 Arlene was first diagnosed with her brain tumour shortly after returning home from a holiday in Las Vegas with Iain. 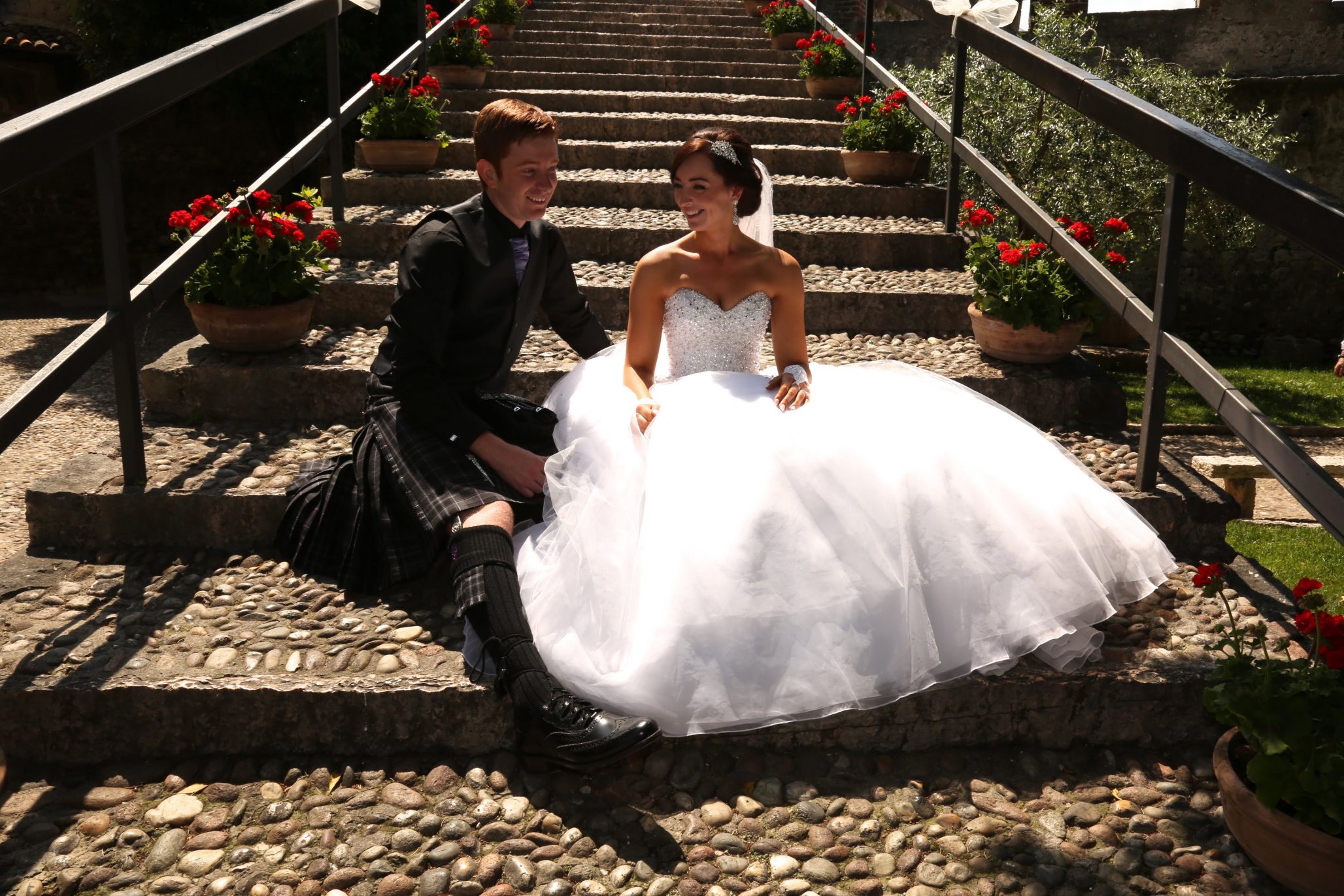 Arlene had her treatment and then married Iain before having their two children. 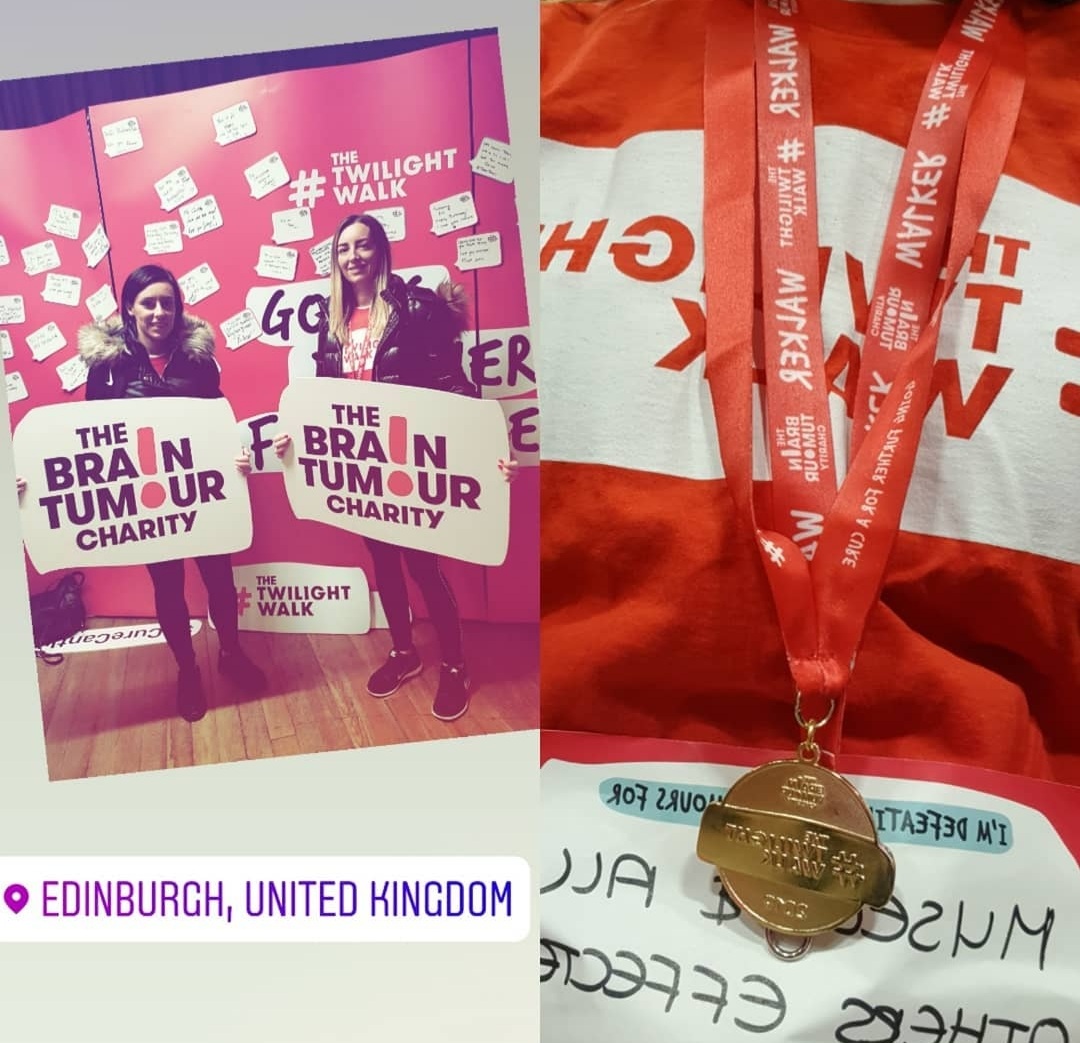 Arlene is taking part in The Twilight Walk.

Arlene’s tumour was in the same location as before and it is currently around 6mm in size. She was given a number of treatment options including surgery, radiotherapy or being put on a ‘watch and wait’ treatment plan. After careful consideration, she opted for the latter. She had six-monthly scans for the first year which are now annual to monitor for any changes to her condition which could mean more treatment in the future.

Arlene and Iain also went on to become parents for a second time as she gave birth to their daughter, Talia, in March 2020 during the first week of Lockdown. In addition, Arlene has been fundraising for The Brain Tumour Charity by taking part in the charity’s flagship event The Twilight Walk twice, including one of the walks throughout Edinburgh with her sister, and raising £1,000 for the organisation so far.

Her mum told her about the Charity when she came out of hospital after her surgery so she had a look on its website and social media channels. She ordered an information pack and also joined the closed Facebook groups the Charity runs to provide support to people affected by a brain tumour diagnosis.

She added: “Living with a brain tumour has got easier over time but there is always the dreaded feeling that one day I will need more treatment. Because of my girls, I will put my all into fighting this brain tumour as I do have a lot to fight for.

“I am supporting The Brain Tumour Charity because their aim to find a cure, the fundraising that they do and the information which they provide is great for people who have been diagnosed as well as their loved ones. None of us had really heard about brain tumours before my diagnosis so Mum researched so she knew everything we would need to know.

“Reading about other people’s stories gave me the confidence to share mine. Outside of my close family and friends, I haven’t told many people about my recurrence but I know how important it is to raise awareness that brain tumours can happen to anyone of any age. So, by taking part in The Twilight Walk again, I hope to raise as much as I can for an incredible charity so they can continue to help people like me.”

You can support Arlene’s fundraising here.