Emmy was the most beautiful, sassiest, courageous little girl, loved by so many. She loved to play on TikTok with her younger sister, bake cakes and biscuits and write stories and poems. Drawing was her little thing to do when she wanted to relax during the evenings too. Emmy had a funny and mischievous personality, often having a little banter with those around her. She had such an infectious laugh which would make others laugh. Her smile too… kept so many going on those tough days. Emmy loved being a little mother hen to her baby cousins and friends’ babies as they came along during the last few years, always up to feeding them and giving them cuddles. 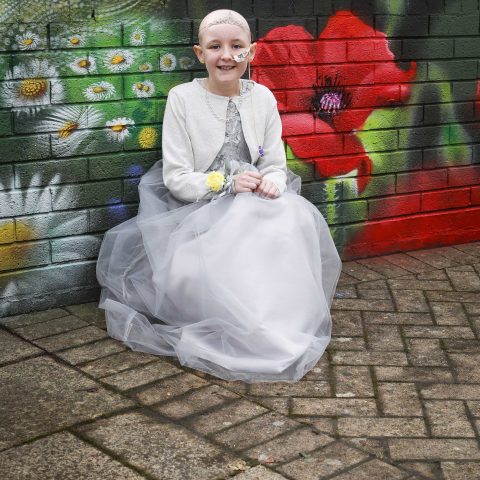 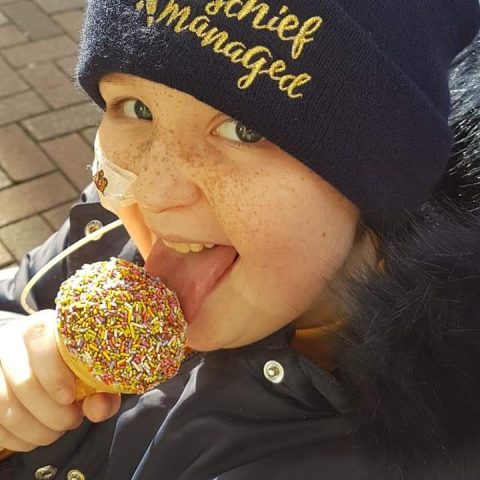 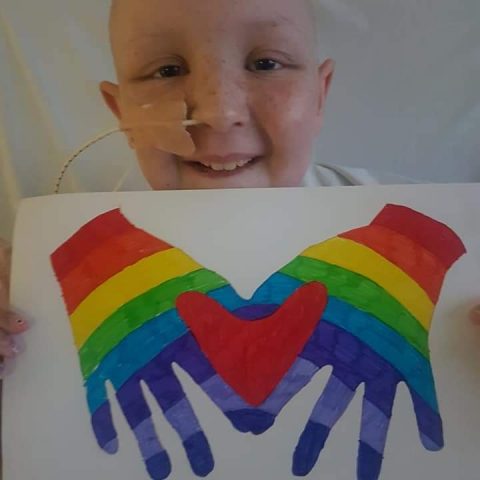 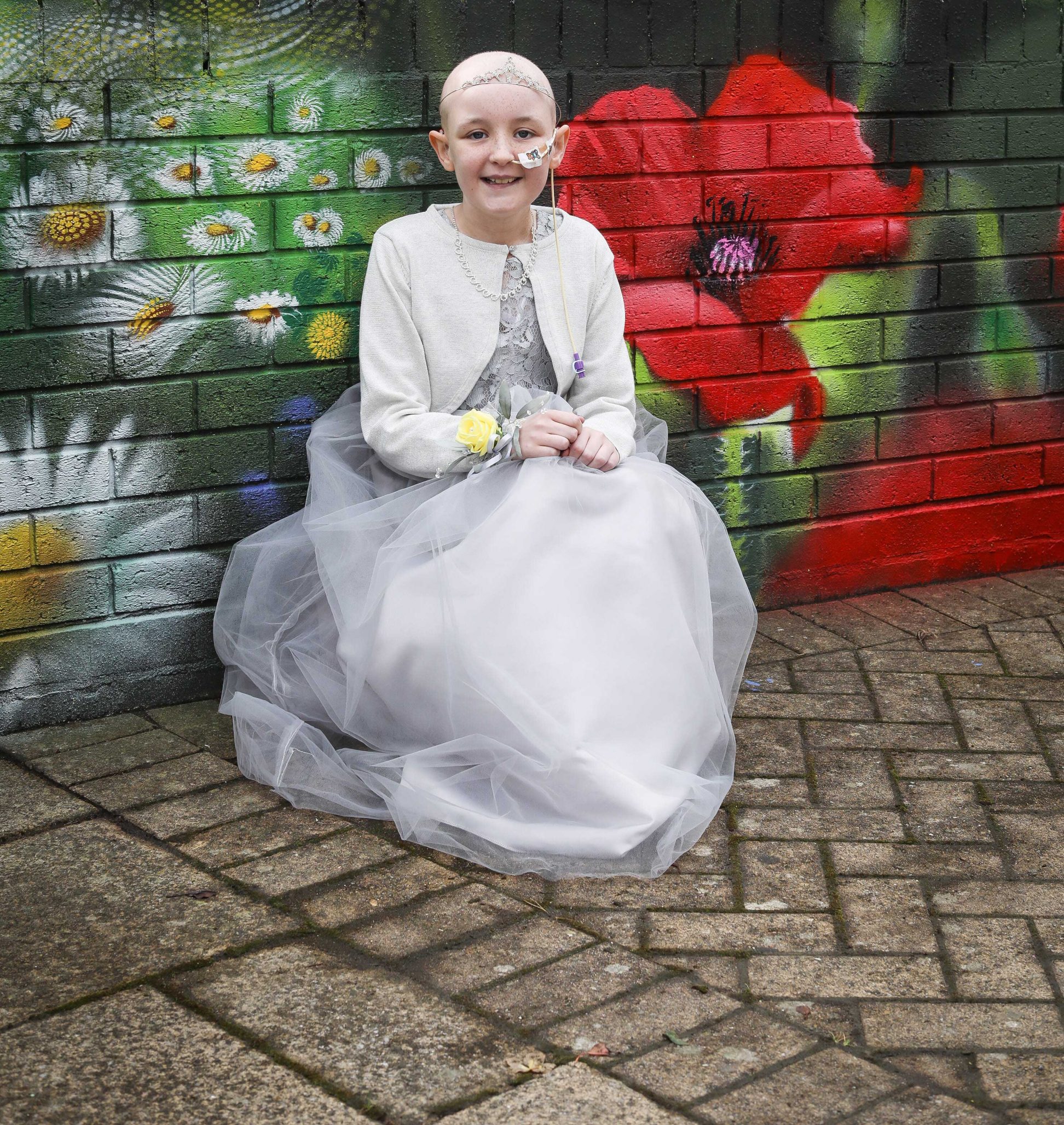 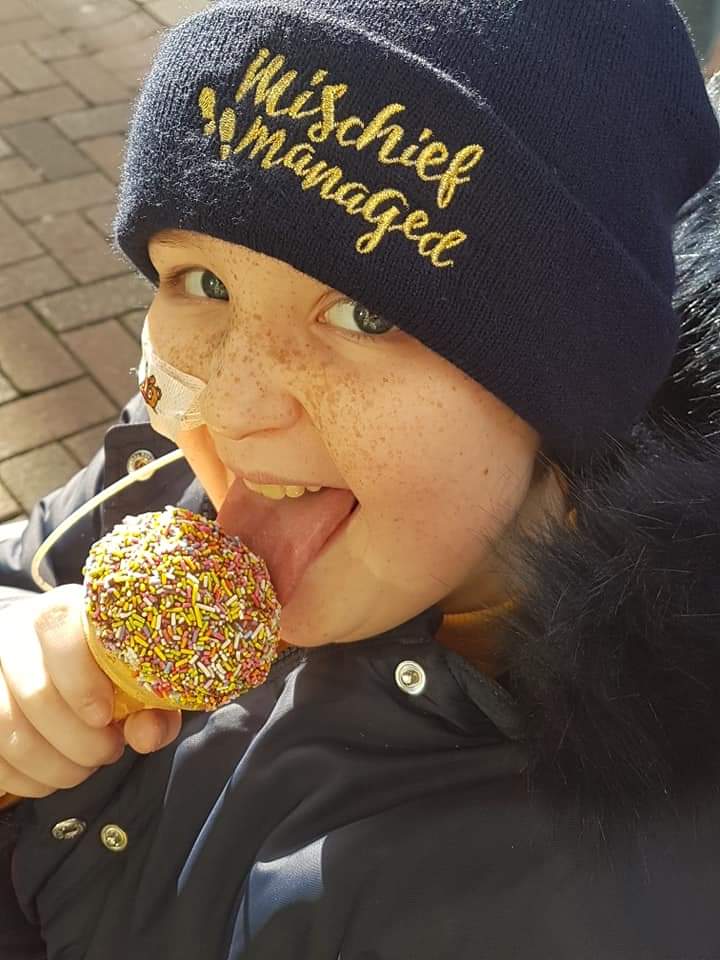 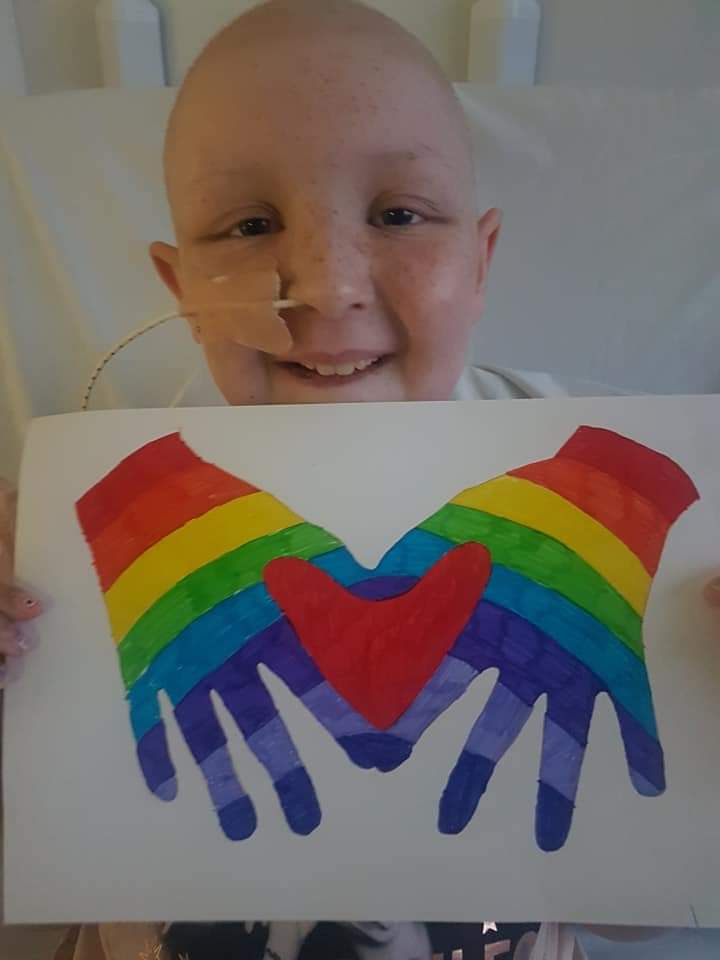 Emmy had just turned 10 years old in November 2019 when she started having the odd episode being sick in the morning but then feeling fine straight afterwards. We thought it could have been the usual yearly sickness bug flying around. Some neck pain soon came which Emmy didn’t really make a fuss about, we thought it was because of her pillows she had for sleeping. Nothing really shouted at us that something else was going on.

After visiting out of hours doctors at our local hospital, they thought it was meningitis and sent us to another hospital for further help. We were observed for a few hours before being sent home that evening with pain relief. All her assessments up to then were normal despite her tiredness and pain. We were back in hospital the following day as Emmy just seemed to not get any better with pain relief. Seen by a consultant, Emmy was sent for a CT scan. That Sunday night our worlds turned upside down when we were told Emmy had a tumour on her brain. Everything went so quickly. Getting her dad back in to discuss treatment etc, we were then transferred to Birmingham Children’s Hospital. We began a fresh week in a hospital we hadn’t been to before, seeing so many doctors, nurses, surgeons, consultants, play specialists, physiotherapists. An MRI was done to provide more details about the tumour. It was causing a build up of fluid on her brain. We began to see more symptoms associated with a brain tumour at this point in hospital leading up to her surgery, balance problems, hand eye coordination and confusion.

On the 6th December, Bob the tumour (Emmy named it) was successfully removed and the fluid build up drained nautrally on its own. Emmy came out of surgery with just a few strands of hair lost through the incision site. It was so neat and tidy. We couldn’t believe it. She began to recover very well, surprising some of the neuro consultants. After 3 days she was up and taking little steps.

11th December 2019 will be a day we will never forget. Being told that the tumour was cancerous broke us. The right word for it was Medulloblastoma. Given how fast Emmy was poorly, it was aggressive. We later found out it was a grade 4. Treatment needed to be given. High intense treatment involving Radiotherapy and Chemotherapy. We were going to be starting 2020 with Emmy facing a tough battle. Leading up to Christmas Emmy had her central line inserted, her radiotherapy mask fitted and a trip to another hospital to have surgery to save one of her ovaries for when she was older.

Radiotherapy began the 6th January 2020. Emmy struggled to begin with, the sickness kicked in almost straight away and she ended up having an NG tube in to help with medications and go on a feed to keep her strength up. 4 weeks were spent having treatment to her brain and spine, the last 2 weeks were then focused on her brain where the tumour was. Emmy spent those sessions listening to music, it sounded like she was having a party. She was awake for all those sessions, and had fun with the staff collecting Harry Potter stickers and beads for her beads of courage collection. Emmy was so brave after the 3rd week deciding to shave her hair off as it was falling out so fast at this point. Her bandana collection soon grew with so many colours. 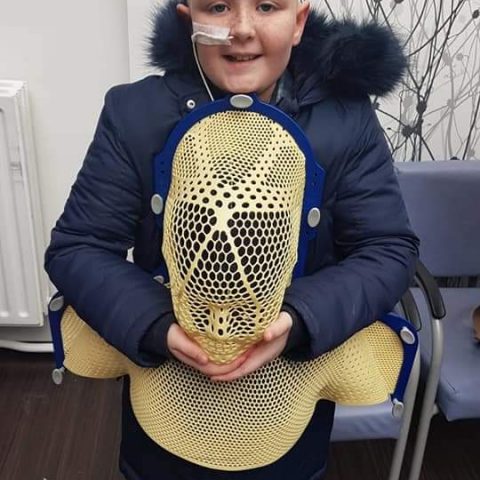 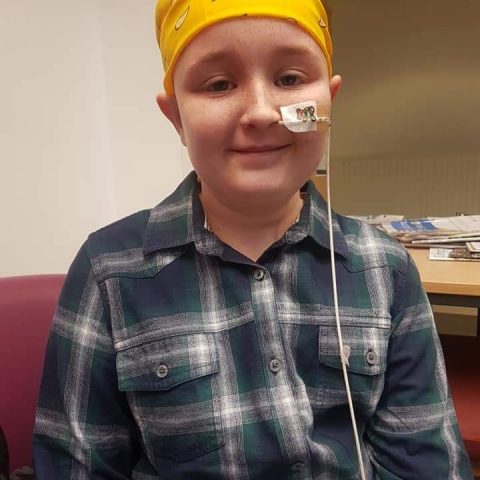 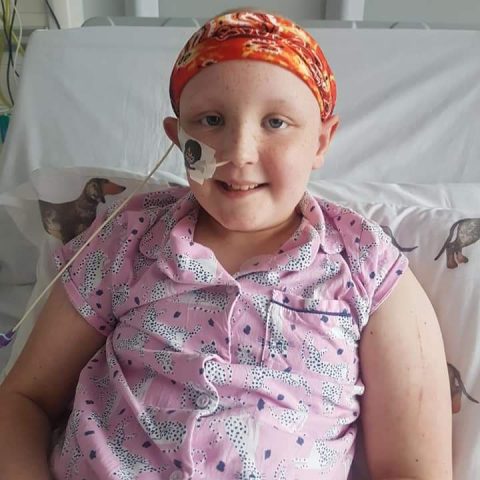 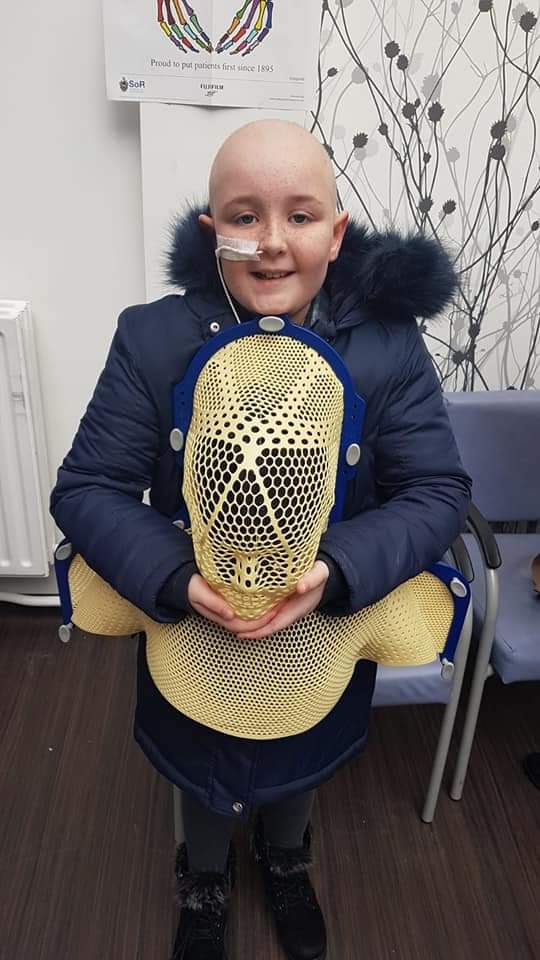 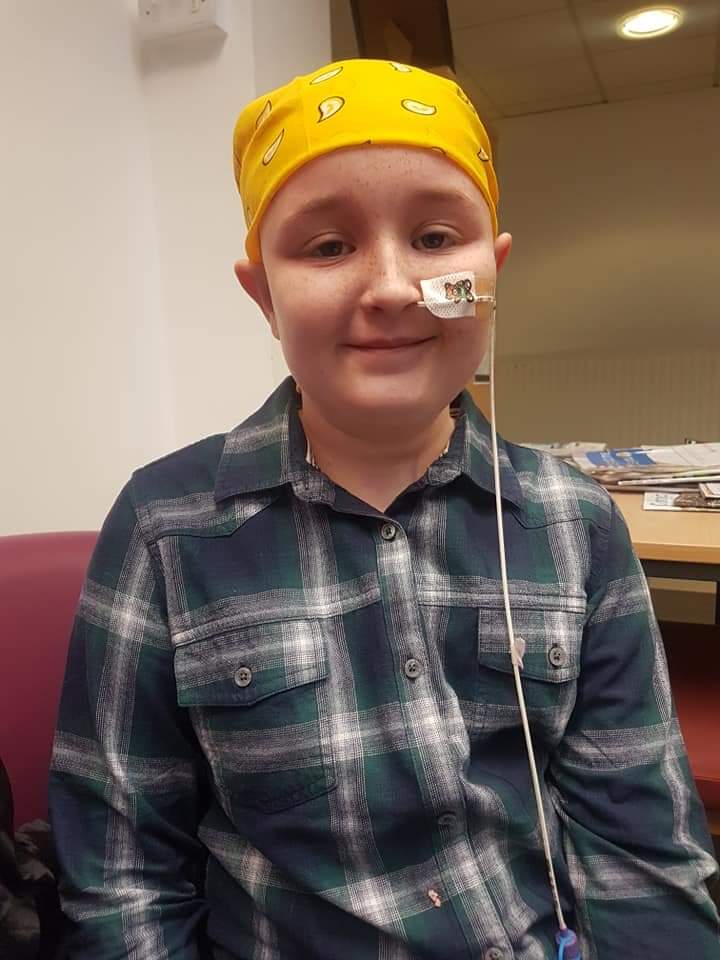 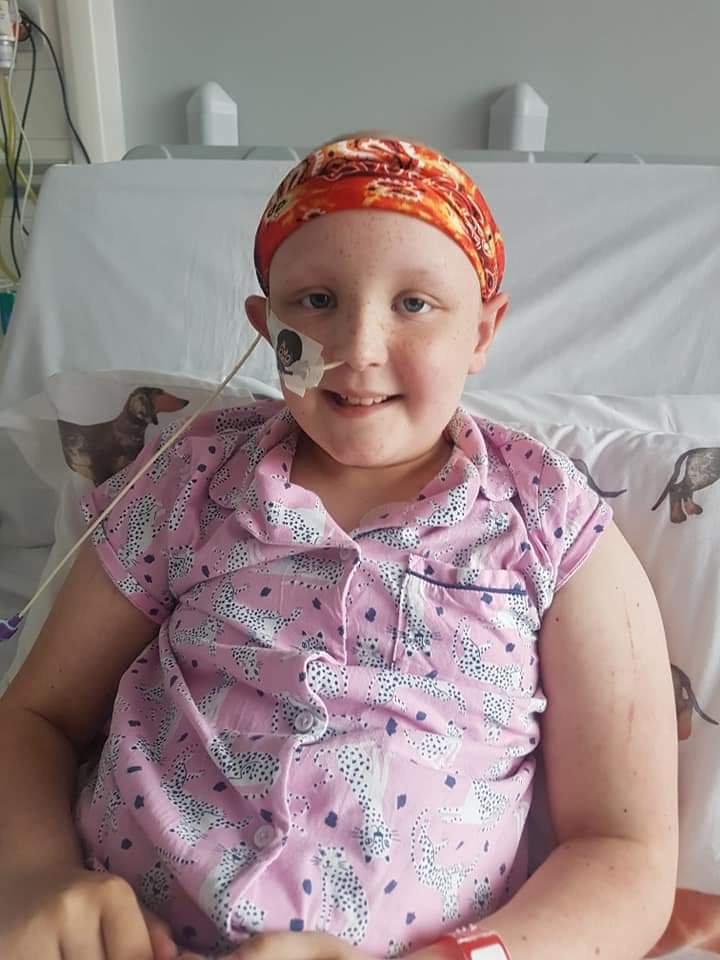 Chemotherapy began end of March 2020. And with it came problems. Emmy struggled from the beginning, having reactions like double visions, horrendous sickness, tiredness, loss of appetite, weight loss. Being high intense chemo, Emmy had her own stem cells harvested and given back. The sweetcorn smell from the preservatives is certainly something!!! The 3rd cycle began and finished very quickly after it put Emmy into PICU (intensive care). Her blood pressure was unstable and she had a temperature. It was overwhelming going from starting that cycle to then going to intensive care. Bear in mind we were at this point in June 2020, during a pandemic, and only allowed one parent in at all times. It was very daunting. Emmy soon came back from Intensive Care just as quick as she went there, within 3 days, her determination to be back with her favourite nurses kept her going. It was at this time coming back up from Intensive Care, that her Supershoes were spotted. Being a big Paul O’Grady fan, Emmy had asked for a picture of Paul to be painted on her shoes. These shoes soon became viral after a picture was tweeted, and Emmy had the chance to talk to Paul on the radio. She broke down crying happy tears listening to Paul. It really made her day and she was so excited to tell everyone about it. Reactions to her platelets certainly kept us all on our toes that’s for sure, the nurses especially. Emmy took it in her stride though. Shorty after this, it was decided with her Consultant to stop the chemo regime she was on and go on to a new regime unknowing what it would do. We went with this decision in the hopes it would just help do as we thought it would from the start, to cure her.

Emmy managed just one cycle of the new regime out of the 2 cycles she was to be given. It was lovely going from an inpatient to an outpatient having this new regime, being able to go home after each session that week. We did end up staying in for a week not long after because of an infection in her central line. After this, her counts just weren’t rising enough properly to be able to start the last cycle. So after getting advice and talking, we scrapped it and moved forward to the end of treatment MRI. 29th September was the best day ever, receiving news everything was stable and no signs of any tumour etc. So Emmy rang the end of treatment bell with her consultant and ANP nurse, alongside some of the nurses and team who have been by our sides all the way through. Emmy smiled so much, and we truly believed this was it. Moving forward, trying to have a new form of routine.

Finding that new routine being home as a family of 5 soon began to take form. Going on school runs taking Emmy’s younger sister, taking a walk with the puppy, just being out the house really helped. Taking in the safety precautions due to the pandemic ongoing, we settled down. Emmy began school at the end of October, all her friends were so excited to see her. At this point, Emmy began having problems having pain in her legs which we started to get checked over in clinic with her care team as the medication just didn’t seem to helping long enough. An xray was done to check for any possible side effects from the radiotherapy, all was clear. Still no idea what it was. Keeping an eye on it we came into November with excitement to celebrate Emmy’s 11th birthday. She took sweets in on the Friday to school for all her friends and had a lovely afternoon laughing with them. She did have a tumble that afternoon which she just handled it like the way she does, carrying on like a superstar. That evening she was tired from the afternoon activities and a little sick. On her birthday the next day we watched her open her presents in between having naps, until the evening when some things just didn’t seem right. Not tolerating light, her feed she was on, having two big sick episodes, we rang the hospital for advice. Taking her to be assessed by ambulance brought so many feelings back.

16th November 2020, 2 days after turning 11, we were given the news that the cancer had come back so aggressively. There was no cure. We were going to lose Emmy. Options were given but it would only buy us time with her, and the uncertainty over her being well and awake to spend it with us was upsetting. As her parents we decided there and then in that office that she was not to be told it had returned. We didn’t want her to be scared of what was to come. Carrying on as normal was the hardest thing to do when deep inside you just wanted to break down and cry. An estimation of weeks and planning to move to a hospice to spend time with family was quickly taken away from us, very unexpectedly by all. Emmy peacefully passed away 20th November with me and her dad by her side, watching Harry Potter films, listening to Disney music, listening to her Paul O’Grady videos. Her hospital room was like a Santa’s grotto, we literally brought it to her early unknowingly to Emmy. The play team on her ward helped decorate her room and the nurses all came to see. They were all amazing helping keep things as normal as possible without Emmy knowing what was really happening. It was beautiful as Christmas was one of Emmy’s favourite times of the year. Saying goodbye to her was the hardest thing we have ever done as parents. Her siblings too. We all miss her terribly.

Despite being in a pandemic, being separated as a family of 5, going through such intense treatment, Emmy continued to show her sassy attitude, strength and bravery throughout. Something that has been left with all those that have met her, loved her etc. We knew all the way through that we wanted to raise awareness and help families going through similar journeys. We want to help move forward and find that much needed cure for brain tumours. So in Emmy’s memory, we have decided to do so. She did things her way throughout this journey, just ask anyone who met her. We will always be proud of what Emmy has achieved, and in moving forward do her proud by taking her dreams and making them come true the best we can.

For it can only be done Emmy’s way.