My husband Andrew was an amazing man. He was a kind, caring, generous, funny, outgoing man and an amazing husband and Daddy. We had been together for 22 years and married for 10 years. Andrew had a growing architectural business and we were about to become parents for the second time. We were so happy.

On 2nd Sept 2010, we received the devastating news that Andrew had a brain tumour.

That day will be with me forever; it was 2 days before Andrew’s 40th birthday and the same day as our 20 week scan for our 2nd child.

Months prior to this, Andrew had started experiencing mild headaches and tingling sensations down his left side. After being referred to a neurologist he had his first MRI scan. The news was devastating. We were just preparing for the birth of our new baby girl and overnight our lives changed forever. We were told that the tumour was inoperable, due to its diffused appearance and position. Within 1 month of receiving this news, Andrews’s symptoms increased and he had his first seizure. He also became very tired and nauseous. Andrew was given anti seizure medication and steroids to reduce the swelling around the tumour. In December 2010 Andrew had a biopsy. Our hopes of coming to terms and living with this illness were shattered when we were told that the tumour was a Grade 4 GBM, the most aggressive type of tumour.

Andrew started a course of radiotherapy, but within a short period of time we were informed that the treatment had not been successful. Andrew then went onto a course of chemotherapy but it had to be stopped due to side effects which could have been fatal. 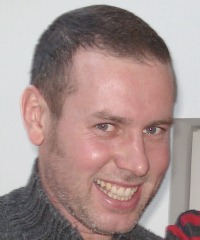 Andrew with his wife and children 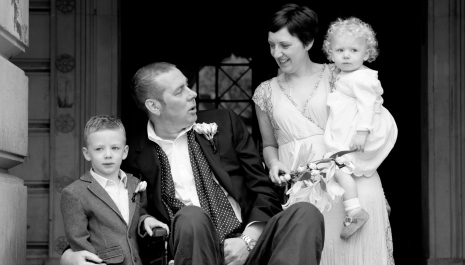 A drawing by Andrew's children 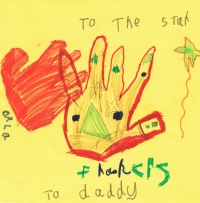 Andrew was in hospital for most of Jan and Feb 2011, but he was able to be at the birth of our beautiful baby daughter on 2nd Feb 2011.

Between May-July 2011 we saw some improvement with Andrews’s health. His mobility was limited but we managed a weekend away to Center Parcs and visited friends and family. In this period we tried so hard to be a ‘normal’ family and enjoy time with Francis and Orla and all our close family and friends.

Throughout this nightmare Andrew remained 100% positive and wanted to try everything to beat this illness. We knew that there was nothing more which could be done in the UK and after months of research and planning, and an overwhelming amount of fundraising and support from our family and friends, we went to America for three weeks in August 2011. This was to start on a treatment which had been shown to give positive results for patients with G4 GBMs. The treatment held the tumour for 8 months, but in March 2012 Andrew had to stop the treatment as the tumour began to grow again and he was not strong enough to remain on the treatment.

Against all the odds, Andrew lived with this aggressive tumour for 2 years. In all this time Andrew kept his strength, determination and sense of humour and fought it to the end.

We have set up Andrews supporters group in memory of Andrew and hope to raise money to help fight this terrible illness. The group has been started with and initial donation of £1,220, which was kindly donated in lieu of flowers by friends and family who attended Andrews memorial service. A donation of £10,000 has also been given to The Brain Tumour Charity out of remaining funds of the Sherwood Foundation, which was set up to raise money for Andrews treatment.

Andrew’s son also had an event at his school. ‘Wear something funny on your head day’ raised over £400. We will continue to raise money in Andrew’s memory and hope to make a difference for patients diagnosed with a brain tumour.

There needs to be more research into brain tumours so that in the future people will not have to go through what Andrew had to go through.

Anyone wanting to donate via ‘my donate’ can do so below.

Donate via My Donate