After 14 years in remission, my brain tumour grew back just before Covid

In lockdown, I fulfilled my life-time dream of writing a children’s book as my legacy. Now I want it to raise money to help find a cure to save other families our heartache.

Sitting next to her daughter Freya, Nancy Carter-Bradley watched as the talented young artist “magically” captured her mum’s story in her illustrations to finally finish her book and make a life-time dream come true.

After the shock of a scan showing her brain tumour had grown after 14 years in remission, it gave Nancy, 44, something positive to focus on in lockdown.

Now her labour of love, The Toadstool that wanted to stay, has been published with the proceeds going to The Brain Tumour Charity, a cause close to her heart as she is driven to help save other families their heartache.

"I was passionate about reading to Freya and my son, Toby, when they were little.

"After university, I got married young to Justin and was busy working as a wedding planner and bringing up two children but my dream of writing never went away." 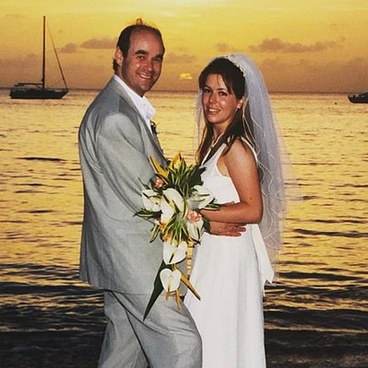 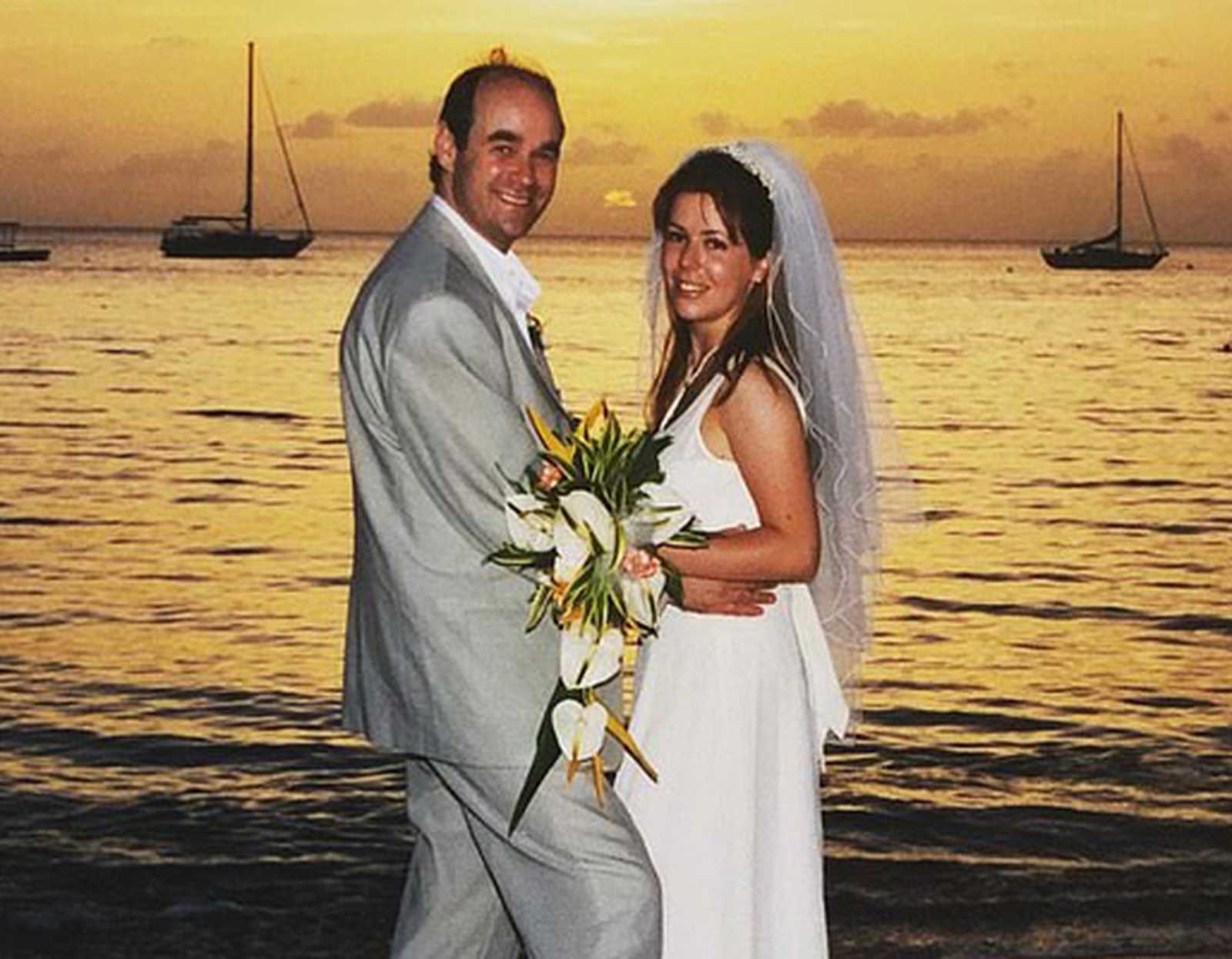 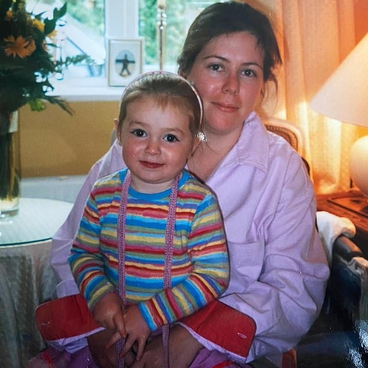 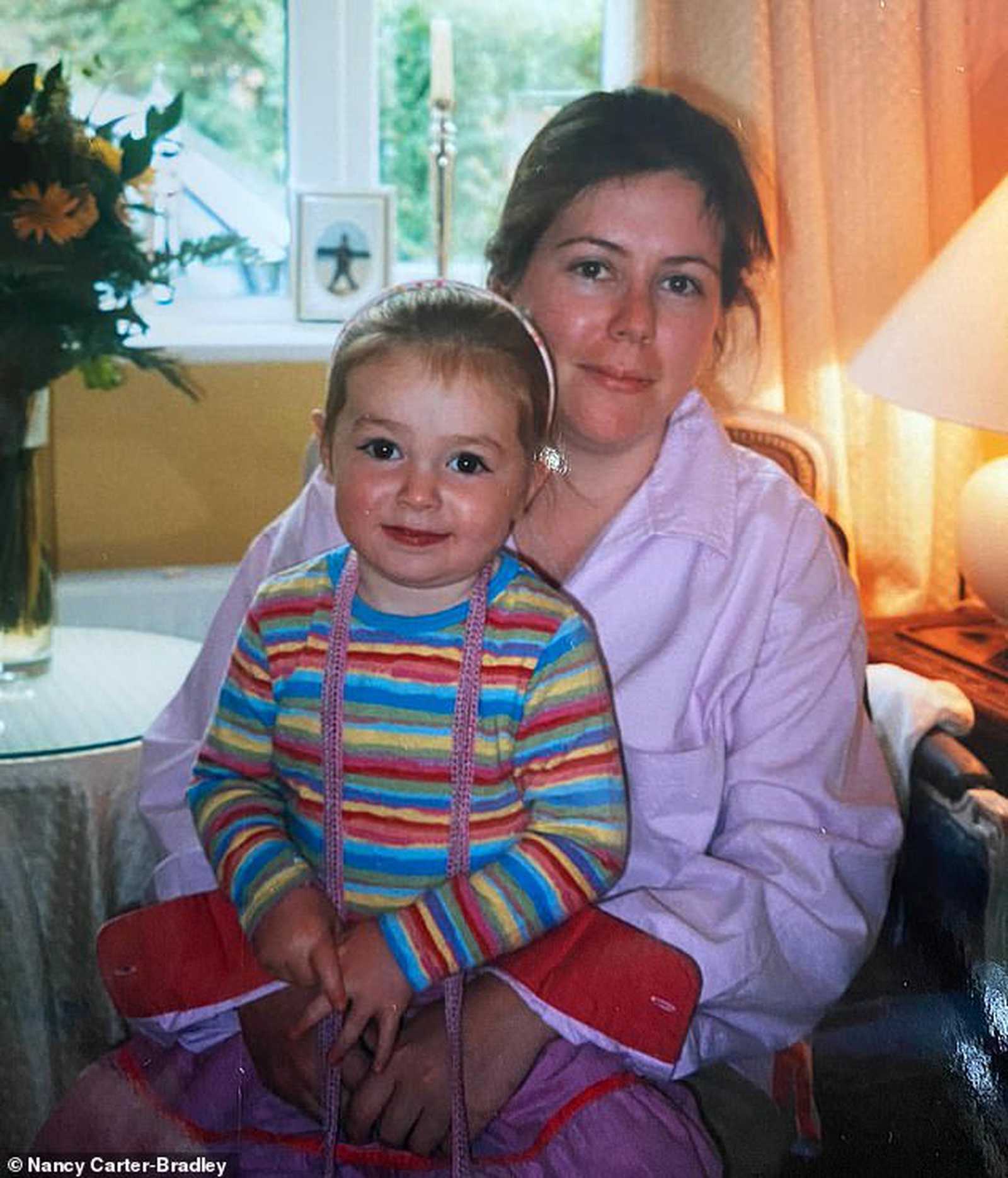 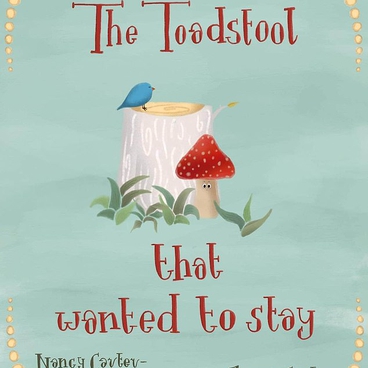 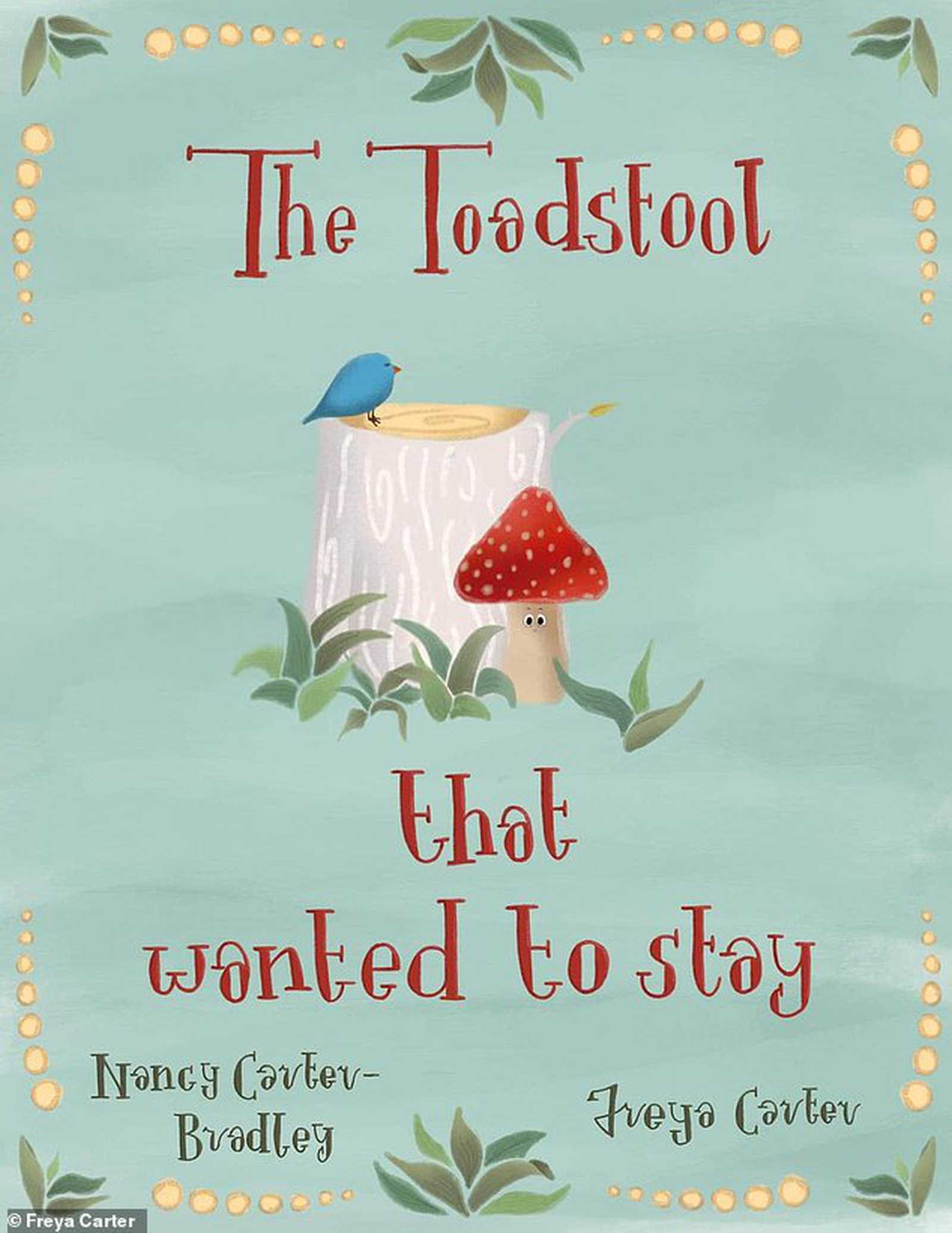 Her scan result fuelled that ambition.

"In lockdown, I thought it’s now or never, I wanted to turn the negatives into a positive and feel that I’d achieved something".

The family was shielding due to Nancy’s chemotherapy treatment so she and Freya, a third-year medical student, had time to make her dearest wish come true.

They’d sit for hours as Nancy honed her story inspired by her love for red spotty toadstools, which grow in woods near her home.

"I find walking therapeutic and love looking for my favourite toadstools, which grow near silver birches, they gave me the idea for my book about a toadstool who enjoys his life on the forest floor. When it comes to an end, his friends carry on living and remembering him. It’s a very gentle look at the circle of life".

“I shared my thoughts and wishes with Freya and she magically transferred my ideas into pictures. She’s such a talented artist and her whimsical illustrations complements my writing style. As we’re so close, she intuitively knew what I wanted and it was wonderful to work with her." 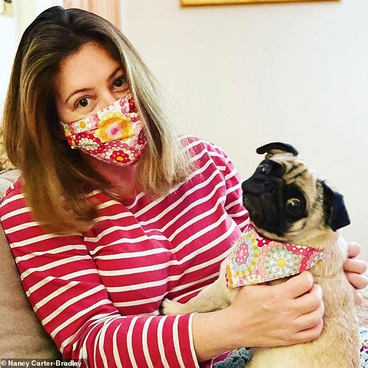 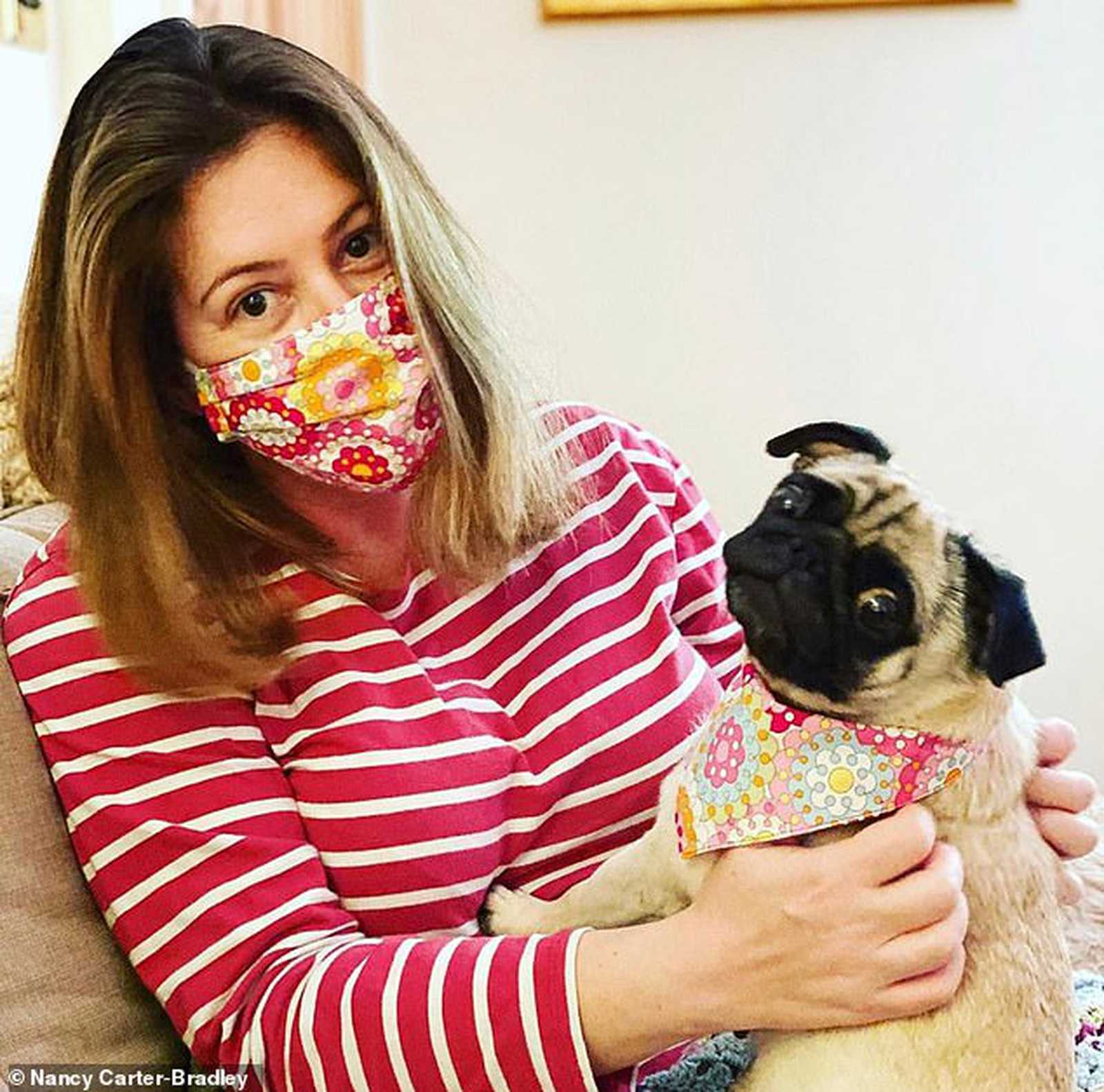 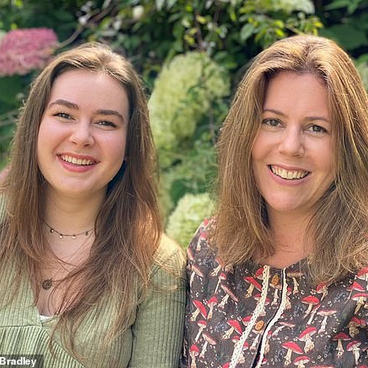 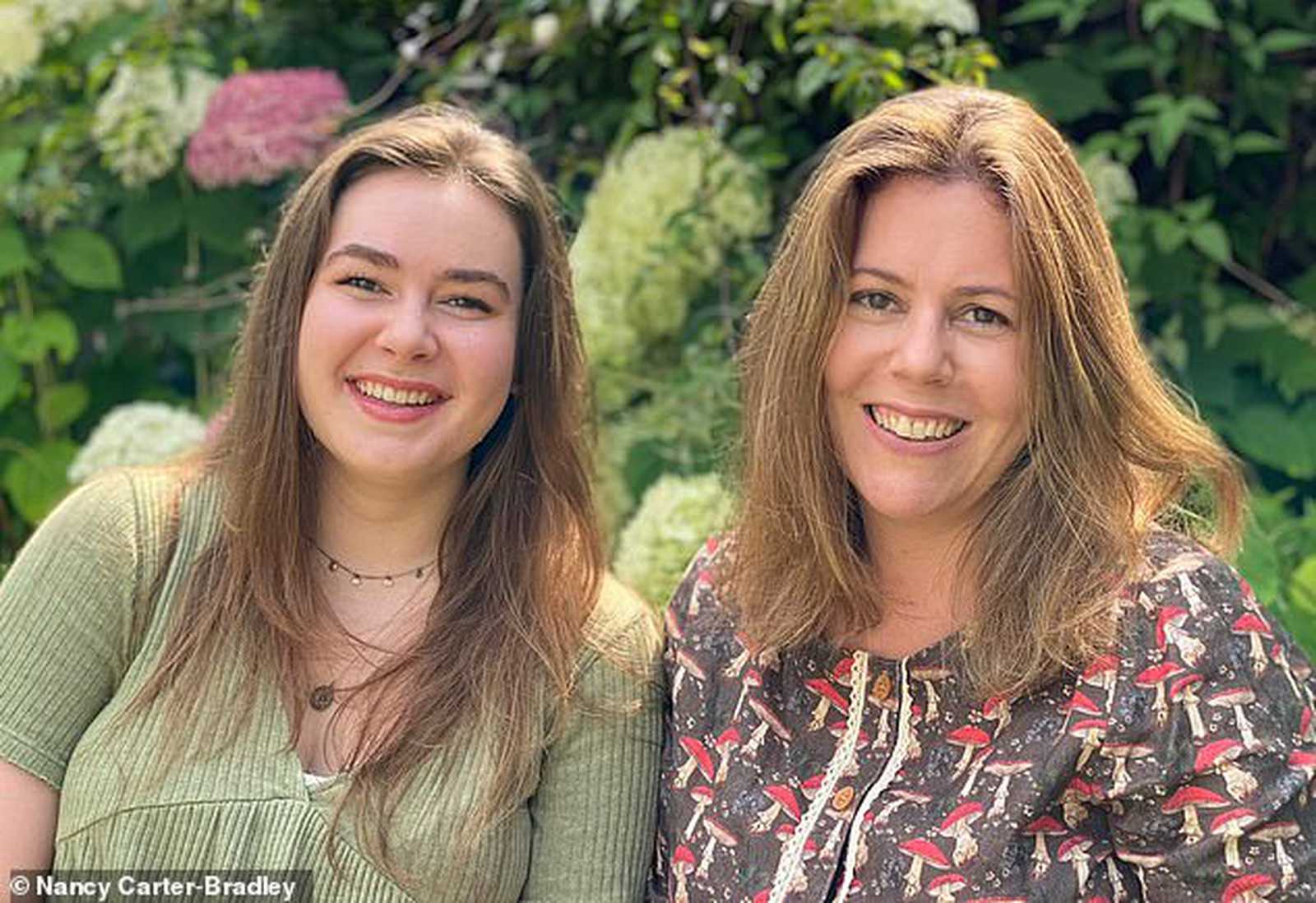 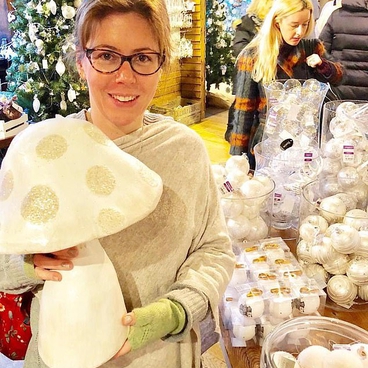 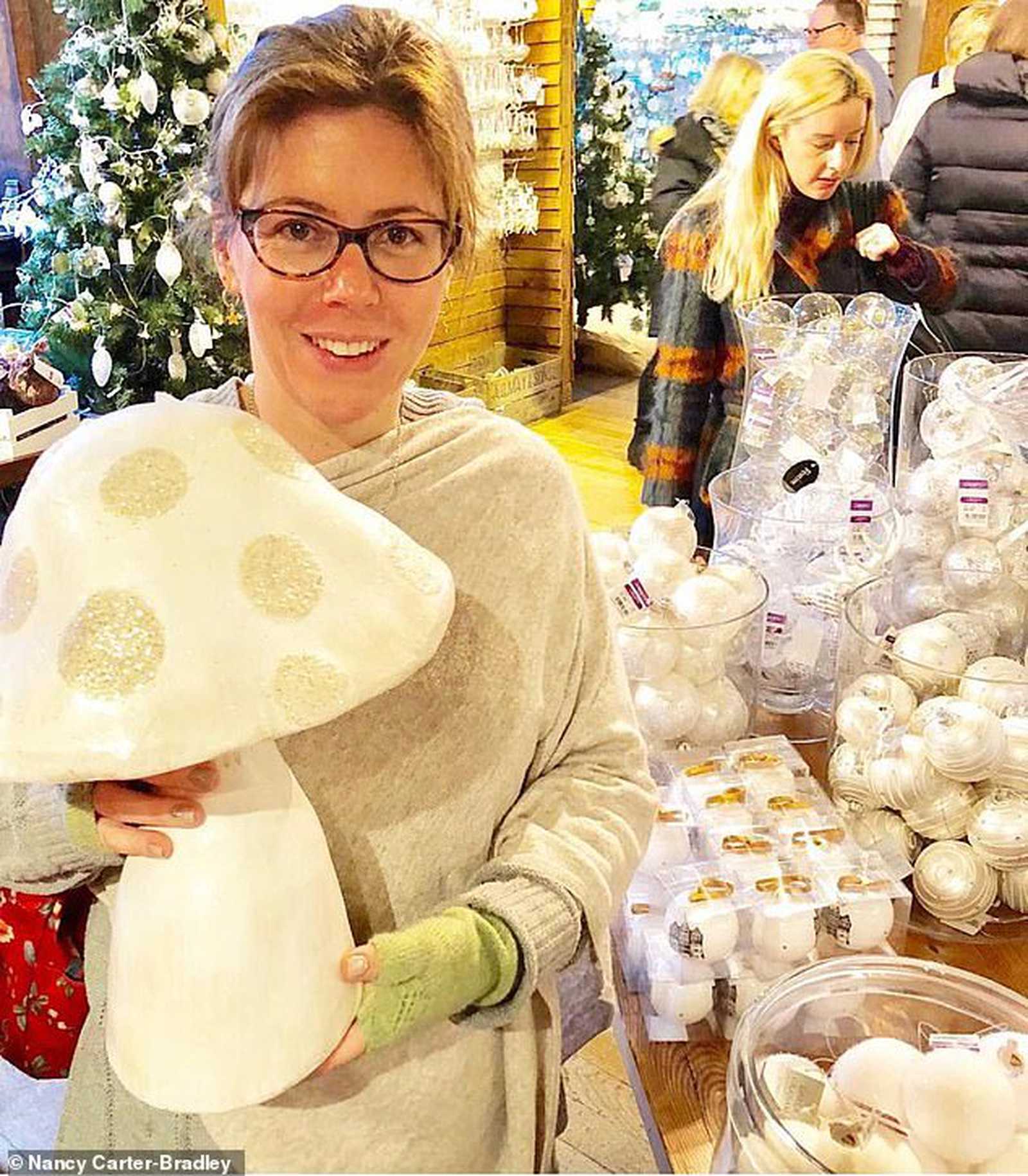 Poignantly, Nancy sees the book as her legacy.

"I know that I probably won’t live to a ripe old age, so I want to leave part of me behind in my writing as my legacy – part of me that will last forever. Finally realising my dream of writing a children’s book and raising money for The Brain Tumour Charity makes me so happy."

Nancy’s nightmare started in her 20s when she suffered consistent symptoms including vision and balance problems.

Over two years, she was back and forth to various doctors over 40 times. Her symptoms were repeatedly put down to depression, somatization and even that she was making it up.

"No one was listening to me," said Nancy.

"Even when I had a couple of seizures, one GP just told me not to tell anyone or I’d have my driving licence taken away! I felt utterly powerless as I knew there was something wrong with me but I wasn’t being taken seriously. I even started doubting myself - maybe it was all in my mind. I was desperate."

Finally in 2005, Nancy was diagnosed after she went to an eye clinic, where an examination found that her optic nerve was swollen due to a build-up of pressure.

Justin was told to drive her straight to the local hospital for a CT scan.

"It was obviously bad news as a nurse gave me a hug after the scan, thirty scans on, and that’s never happened again".

As they got back in the car, Nancy had a call from Charing Cross Hospital, which had been sent the scan images, telling her to get there asap.

"Two hours later, I was in a hospital bed on drugs to reduce inflammation as my brain was very swollen, before the operation, my surgeon came and told me that it was quality and not quantity of life I had to think about. Justin had gone home to sort the kids out and I couldn’t believe he told me I was going to die when I was by myself."

Surgeons performed a craniotomy to removed most of the golfball-sized tumour, just leaving a rim.

Biopsy results revealed it was a grade 2/3 oligodendroglioma.

“I felt almost relieved to be diagnosed, even though part of the tumour was cancerous, at last people believed there was something wrong with me and I knew I wasn’t going mad.”

She had six weeks of chemotherapy and radiotherapy followed by a triple dose of Temozolomide chemotherapy tablets for six months.

"The most difficult part was being apart from the kids who were then six and seven. I stayed at my parents’ house nearer the hospital and so I wouldn’t pick up infections from them. I missed them dreadfully."

After surgery, Nancy was left partially blind with constant black and white flashes, which she still suffers to this day. She was prescribed with anti-depressants to help her cope with anxiety.

She had scans every three months which were eventually reduced to once a year. In 2016, Nancy’s tumour was reclassified as an astrocytoma.

"It was an utterly soul-destroying time," said Nancy.

"My children have been through so much, losing their father like they did and having to manage a mum with brain cancer, its repercussions, and its damage both emotionally and physically.

"Their experiences have made them resilient and compassionate."

And “nothing is taboo” with Freya and Toby, 22, a soldier.

"I’ve always been very open with them, we’ve had lots of tears and heart-to-hearts but a family coping mechanism is definitely a dark sense of humour. I’ll loaf about and say, “Please get me a cup of tea, I am dying you know!"

Nancy found love again when she met David, now 54, online and they got married in 2013.

"As an ill widow with two children, I never imagined I’d fall in love again, but the loneliness got to me and I’m hugely grateful to have David in my life. He is so understanding and gets that a part of me will always love Justin and grieve for him, although I now love David."

"I think of my life as being in chapters – one was Justin and now it’s David." 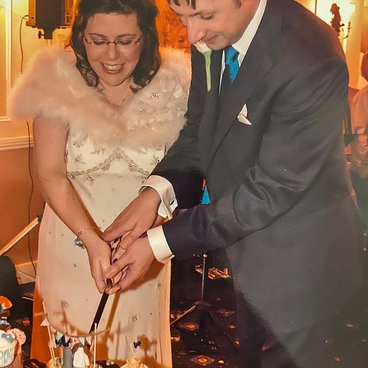 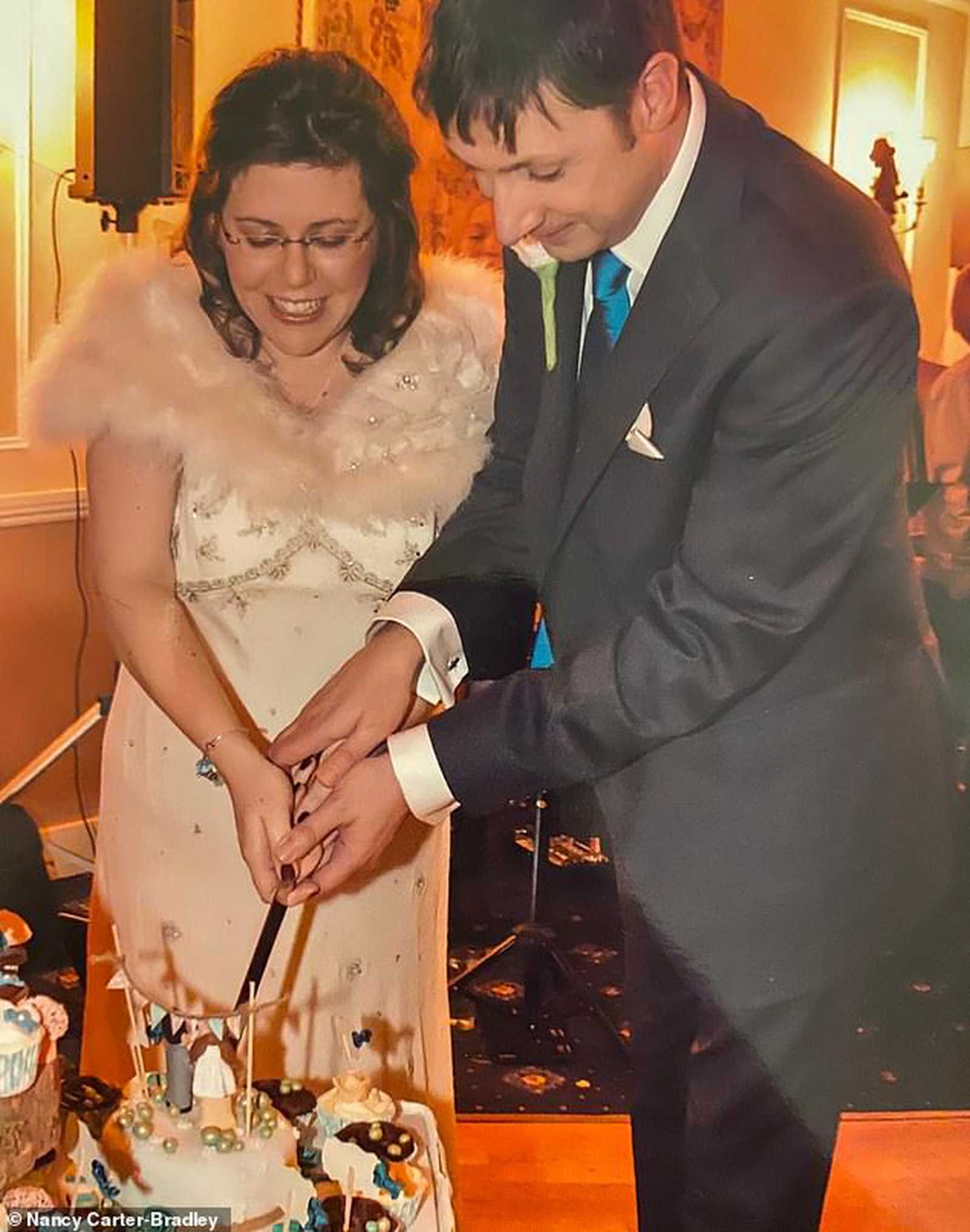 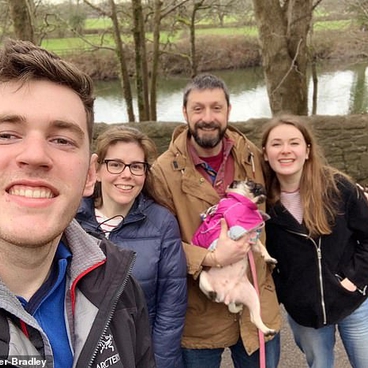 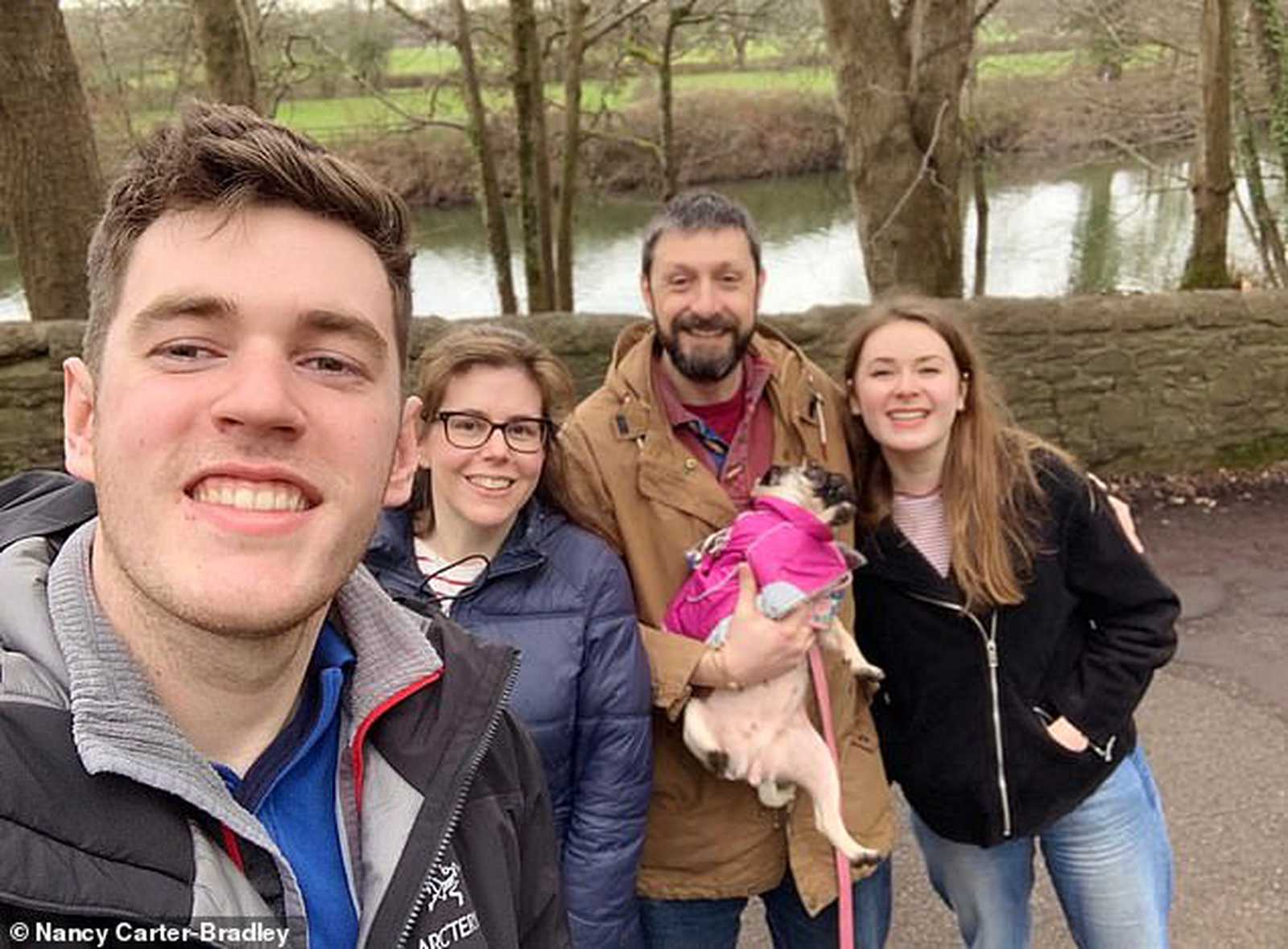 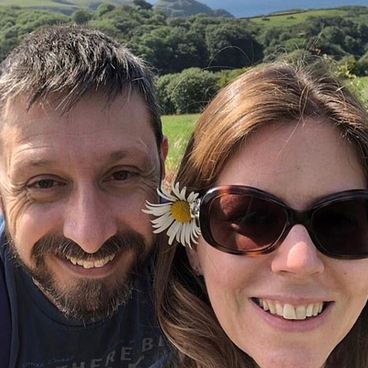 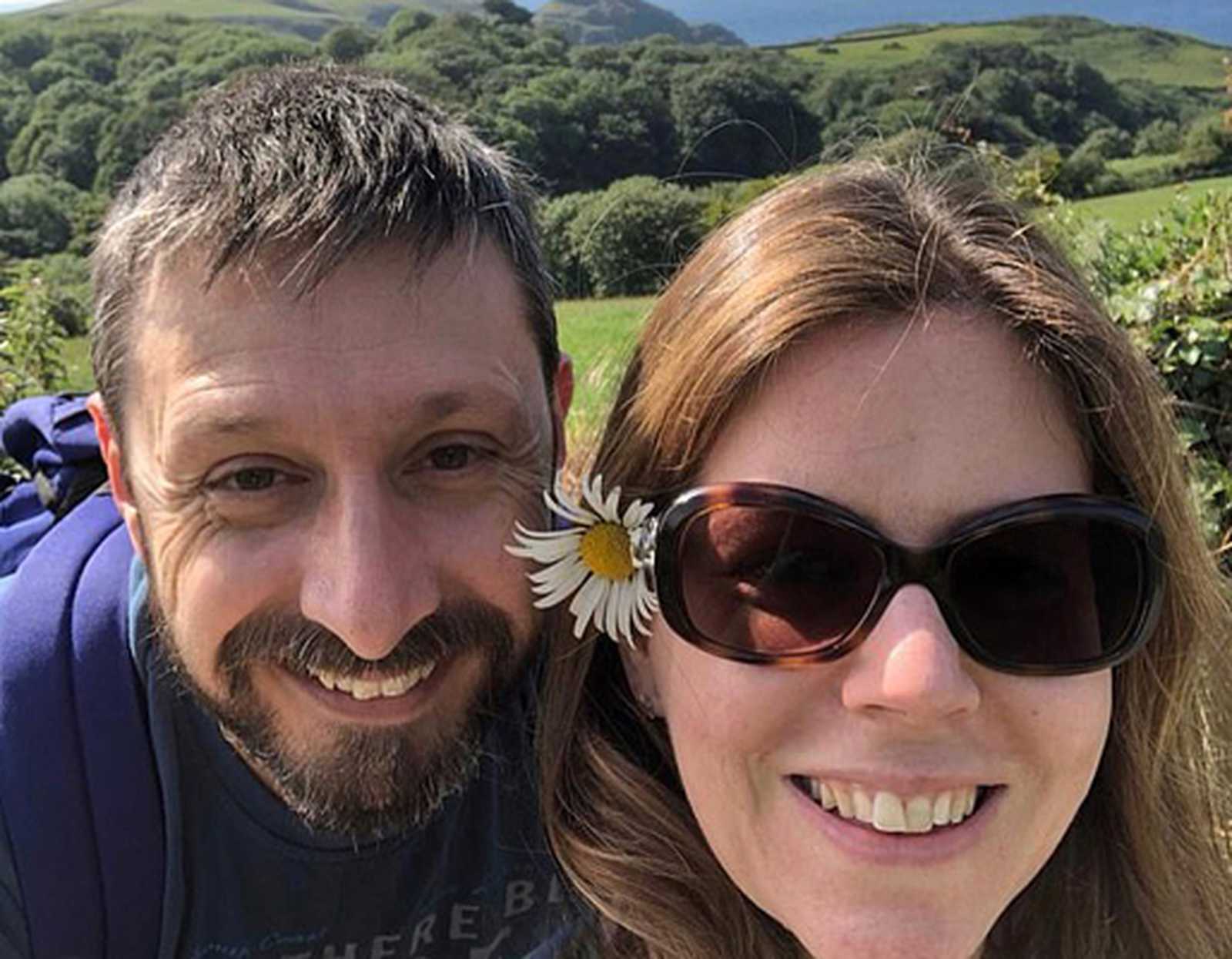 "I hadn’t had any symptoms but my annual scan showed ‘suspected progression. When I was told my brain tumour had grown back, I swore and blurted out ‘Get this out of me! I don’t care if I’m blind or lose the use of my left side, I just want to live."

Nancy was put back on chemotherapy tablets for a year. Then the Covid-19 pandemic hit.

"After 14 years in remission, why did I have to relapse during Covid?" said Nancy.

"When I was told in April, my treatment may be put on hold I had a meltdown on Instagram and the post had 83k hits.

"I felt poleaxed and powerless and spoke out for friends and everyone else in my position."

Fortunately, Nancy’s treatment wasn’t paused as her bloods were done locally and David picked up her chemotherapy tablets to have at home.

Now Nancy – who has signed up to BRIAN, a global data bank so people can share information – has learned to balance fear and hope.

"I wake up every day and cannot believe I’m still here. I see myself as an anxious optimist, every day is filled with fear alongside hope. Hope that I have more time and hope that some better treatment or a cure is found."

"The fear of knowing what will happen, however, is a double edged sword as it has enabled me to really focus on the important things in life."

"It has also helped me gain a greater sense of empathy and understanding of how we are so lucky to be given a chance of life."

"Whether it be genetics, chemistry, and my treatment, my team at Charing Cross or simply the wind blowing in the right direction.... I’m lucky I’ve had some more time."

"But I am greedy, I’m 44 and otherwise well and I want more time. I’m very tired and I’d love a break from treatment and this rollercoaster. Boring would be nice!"

Nancy “feels blessed” to be embraced by her family’s love.

"My children are truly great spirits and I’m proud to be their mum, I feel blessed to have had a happy marriage with their dad and to experience love again with David."

Now she hopes her fundraising for The Brain Tumour Charity will help give people more precious time with better treatments and ultimately find a cure.

"Finally making my dream come true by writing my book is the best thing that could have come out of me falling out of remission, It means the world to me to help The Brain Tumour Charity make a difference to give us all hope.”

Sarah Lindsell, chief executive of The Brain Tumour Charity, said: “We are so grateful to Nancy for sharing her story to help us raise awareness and for giving us proceeds from her beautiful book to help us in our mission to defeat brain tumours – the biggest cancer killer of children and under-40s in the UK.

"We are hugely touched how she turned her relapse and the stress of lockdown into a positive by writing her book and helping us to raise vital funds. Covid-19 has put so much on pause. We can’t press pause on our mission to defeat brain tumours, which is why we are funding £4.8 million for vital research over the next five years. We receive no government funding, so it is thanks to wonderful supporters like Nancy that we can carry on our vital work."

Originally published on The Daily Mail

"My brain tumour was only found after my pancreatic tumour."

Travel addict not letting childhood brain tumour keep her on the ground.

'Positivity helps me to lead a happy life following my GBM diagnosis'.