Sebastien Vanderlinden was only 15-years-old when his dad was diagnosed with a Glioblastoma multiforme brain tumour which would rob the family of the strong role model who they all held so dearly in their hearts.

Yet, despite his trauma, Sebastien now runs a leading UK health supplement company, Yumi Nutrition, and he says his drive for success comes from his dad, Thierry Vanderlinden.

Sebastien said: “My dad was a really strong father figure, he never really showed any weakness – even after he was diagnosed with a brain tumour. I learned so much from my dad – he made me who I am today because of his positive and relentlessly ambitious nature. I owe him a lot although he may never know it.”

Sebastien grew up in his native Belgium with his sister, Aurelie, who is now 25 years old. In the weeks leading up to his dad’s surgery, Sebastien and his sister noticed little changes in their dad’s behaviour – but never could have predicted what was happening. Thierry didn’t tell his two children about his condition which Sebastien believes was a way to protect them.

Sebastien said: “Dad was starting to act in some unusual ways – we know now that he was preparing us for him possibly passing away. He was having in-depth talks with us and I also found a Will on his computer. We went for what we now know was a ‘goodbye dinner’ the night before his operation. But we just didn’t know how to bring up the conversation with him to ask what was happening and he couldn’t do it himself, either.”

It was after the operation that Sebastien and his sister were told about the brain tumour. The surgery was successful as was the recovery and so the family had another 4 happy years together. Thierry returned to the mentally strong man he always had been and any signs of his former trauma were hidden away under what became a signature flat cap hat. His condition was monitored with regular scans.

However, in 2012 a routine scan showed that the tumour had returned. Thierry needed more surgery as well as rounds of chemotherapy and radiotherapy. It took its toll on him both physically by zapping him of energy and mentally as he tried to ensure financial stability for his family after having to give up work as an IT consultant.

Sadly, Thierry passed away on the 2nd of October 2012 at home with his family around him, four years after his original diagnosis. 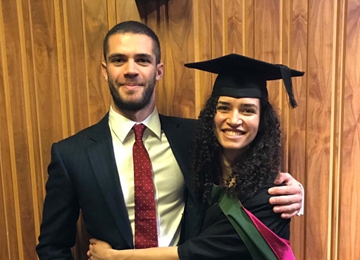 Dad always did his best to stay positive and have a laugh but it must have been so tough on him. He had dreams of recovering and being successful in his future – but that wasn’t meant to be. Instead, his ‘never give up’ approach meant he was a strong role model for me as he approached all that he did with such passion and ambition without ever being materialistic. I always try to do the same in my life now too.

It was Thierry’s positive attitude towards life which encouraged both Sebastien and Aurelie to pursue successful careers after leaving Belgium to move to the UK. Aurelie got a scholarship at Sheffield University to study a PhD in brain cancer and Sebastien set up his own company, Yumi Nutrition.

Sebastien said: “Things were difficult after dad died. We all missed him dearly and our family finances were stretched. I had promised my dad that I would always look after my sister and I knew that I had to depend on myself for success.

“I saw that there was a gap in the market for chewable vitamins for adults – so Yumi Nutrition became one of the first companies in the UK, focusing solely on a wide range of chewable vitamins. I am so proud of how the business has rapidly grown when it just started out by posting deliveries from my one-bedroom flat.”

Sebastien is now supporting The Brain Tumour Charity as part of a corporate partnership with Yumi Nutrition. He will provide mentoring for the charity’s young audiences as well as offering advice to help the Charity itself grow, particularly in the Coronavirus pandemic.

I am so proud of how well the business is doing but I do feel like it is therefore my duty to give something back. The Brain Tumour Charity does such an incredible job of helping and supporting people at such a difficult time – I know that it would have made a huge difference to my family at the time if such an organisation had been around to help us

Find out how you can support us

From taking part in events to volunteering or gifts in kind, get your company on board!